Being pleasantly surprised by a movie I expected to have fun with is an unusual experience. Much more common is the film that I expect nothing out of that exceeds my expectations. Of course, I see those films in a more favorable light because they have a lower bar to surpass. In a way, this sliding scale—for lack of a better term—when it comes to films and my expectations is usually unfair to movies like BEYOND THE GATES. With a clever premise and a good cast of genre favorites, I had higher expectations for the film than I do a lot of the lower budgeted horror films I watch on almost a daily basis. That usually sets a film up for disappointment in my eyes, but this time, I was happy to find the film exceeded my higher expectations. I wish that happened more often.

Gordon (Graham Skipper) and John (Chase Williamson) are estranged brothers who are brought back together by the disappearance of their father. Gordon is uptight, speaking in short, clipped sentences that he layers with bitter sarcasm when provoked by his brother. John is laid back and just getting to the age when the “slacker” routine is less cute than it is sad. The tension between the two is due not only to their different personalities, but also the circumstances of their reunion. 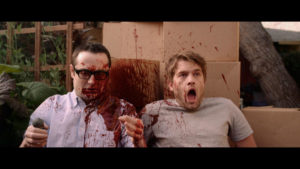 Gordon notes their father’s habit of going missing before, but after eight months, this one seems to have stuck. Forced together to box up the inventory of their father’s video store and clean up his house to put it on the market, Gordon and John confront unhappy childhood memories of growing up with their drunken, possibly abusive parent. Further complicating matters is the arrival of Margot (Brea Grant), Gordon’s girlfriend. While she and Gordon are trying to work through issues in their relationship, John just sees what to him looks like Gordon’s perfect life (a good job, a beautiful girlfriend, a home he owns). But sibling rivalry often blinds people to the full truth. Gordon’s life is not perfect—the effects of being raised by an alcoholic continue to reverberate—and that becomes more apparent when they discover an old VHS board game called “Beyond the Gates” in their father’s office. 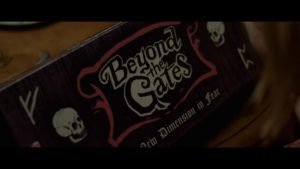 The game features a board, a few character pieces, some cards, and a VHS tape. The host (Barbara Crampton!) on the tape promises that if the players can defeat the game, they will save their father. Needless to say, things quickly go sideways as Gordon, John, and Margot play the game. A different dimension is opened, people are possessed, and bloody fatalities result in the real world as the trio plays the game that increasingly seems to have an agenda of its own. 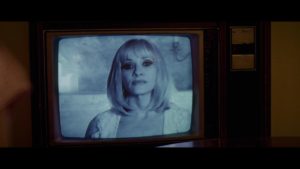 If BEYOND THE GATES were nothing more than the hook of using the brief fad of VHS board games for its premise, it would still be a fun movie. Thankfully, director Jackson Stewart (who co-wrote the script with Stephen Scarlata) gives the film a real heart with the brotherly bonds of Gordon and John slowly being repaired by the journey the game takes them on. As it becomes obvious to John that Gordon is not the runaway success he has imagined and Gordon sees what leaving John behind to deal with their screwed up father did to his little brother, you can see the years of resentment and anger dissipate between them.

Skipper and Williamson are terrific — especially when playing off each other. Their chemistry feels very much like a true prickly relationship between siblings who annoy each other, but are more annoyed by the fact that they love the other and can’t just walk away from their bond. Beyond a general physical similarity between the two, you can see similar traits. Especially note how the acidic sarcasm that Skipper occasionally gives Gordon is mirrored by the less hurtful, more comedic sarcasm that Williamson gives John to hide his feelings of disappointment and hurt at how adrift his life has become. 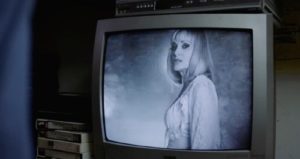 Crampton is vampy fun in her small turn as the host of the game, giving the film a real connection to ’80s horror films that runs a little deeper than nostalgia. Grant does a good job with the slightly underwritten role of Margot. Alternately vulnerable, supportive, and funny, Grant made me really like Margot and care about her more than just being a potential damsel in distress.

While I’ve focused more on the family dynamics of BEYOND THE GATES, it functions just as well as a horror film, with bursts of surprisingly graphic gore achieved via messy practical effects. Stewart also stages some impressively scary sequences once the action shifts to the alternate dimension and the trio are met with ghouls who attack them physically and mentally in their most emotionally vulnerable moments.

If the audience cares about the characters, they will be more frightened when they are in danger. It is an obvious lesson that has been understood by smart horror filmmakers for generations, but still occasionally needs to be reiterated. Stewart gets this and the patience he shows in the first two acts as he and his cast build their characters into people worth caring about, is paid off once the film goes into full horror movie territory.

There is a refreshing lack of cynicism in BEYOND THE GATES. Yes, there is some nostalgia for the ’80s on display with several scenes set in an old mom and pop video store and the central hook involving the game, but it is always in service of the story and informs the characters who are emotionally trapped by the past. But having nostalgia for and knowledge of ’80s horror movies and games is not a prerequisite for enjoying the film. Stewart creates a mood that is reminiscent of ’80s supernatural horror movies, but never tries to drop in inside jokes or requires the audience have an encyclopedic knowledge of references to movies like THE GATE or THE BEYOND.

BEYOND THE GATES is Stewart’s feature directing debut, but you would not know it with how confidently he has crafted the film. This is the kind of witty, scary, and deeply satisfying horror film that we do not get enough of these days. I look forward to what he does next.

BEYOND THE GATES is in theaters and on VOD from IFC Midnight on Friday, December 9th.