After its premiere on Chiller TV in June, the retro-slasher flick FENDER BENDER hits Blu-ray, DVD, and all major VOD platforms on October 4th, 2016 via the good folks over at Scream Factory.

Featuring DAILY GRINDHOUSE favorite Bill Sage (AMERICAN PSYCHO, HAP & LEONARD) as a psychotic killer who stalks a teenager (Makenzie Vega) after they get into the titular accident and exchange information, the film is of interest for genre fans not just for its throwback feel, but also because it was written and directed by Mark Pavia.

For those of you who do not remember Pavia’s name, he made a little bit of a splash all the way back in 1997 with an adaptation of the Stephen King vampire tale THE NIGHT FLIER. That film boasted a terrific performance by Miguel Ferrer, over-the-top gore, and an unsettling ending that actually improved on King’s story (Steven King always seems to have trouble with those endings! – Ed.). It struck me as a great calling card for Pavia, but despite the growing cult status of his debut feature, he dropped off the map for almost twenty years. With genre heavy hitters like Chiller TV and Scream Factory behind the film, FENDER BENDER appears to be Pavia making a major comeback. 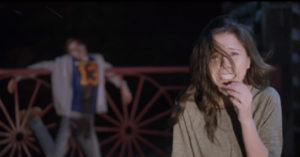 In addition to the usual behind the scenes featurette and trailer, the Blu-ray and DVD extras includes two commentaries (including one by Pavia), a “Slashback” trailer reel of vintage slasher previews, and a “Retro VHS” version of the film that the press release promises will take viewers “back to the 1980’s and the heyday of VCRs.” 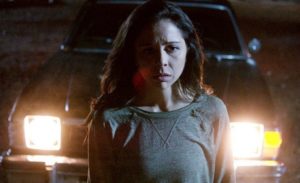 DAILY GRINDHOUSE will have a full review of the Blu-ray before its October 4th release. In the meantime, check out Sage going full creeper in the trailer and go give THE NIGHT FLIER a look. 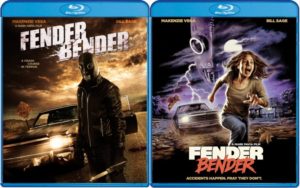