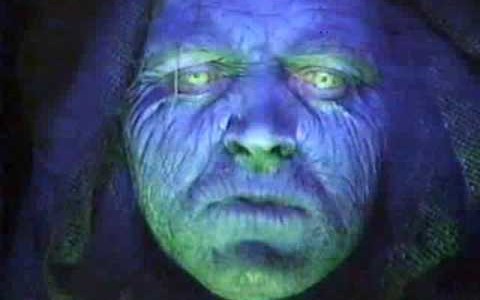 One of the highlights of last weekend’s BRUCE CAMPBELL HORROR FILM FESTIVAL was Jackson Stewart’s directorial debut, BEYOND THE GATES. BEYOND THE GATES features a possessed VHS board game of the same name that two brothers must defeat in order to save their father’s soul. 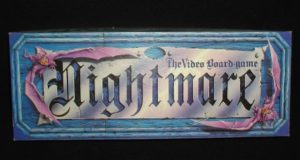 The stakes certainly weren’t that high in NIGHTMARE, a 1991 VHS board game released by A Couple ‘A Cowboys and J.W. Spear& Sons. Part of the manufacturer’s ATMOSFEAR (titled as such overseas due to another game called NIGHTMARE that had nothing to do with Freddy) series, each player would play as one of the six harbingers: Gevaudan, the werewolf; Hellin, the poltergeist; Khufu, the mummy; Baron Samedi, the zombie; Anne de Chantraine, the witch; and Elizabeth Bathory, the vampire. Obviously Gevuadan was the equivalent to the racecar while Baron Samedi was the shoe…nobody wants to be the shoe. The object of the game was to escape to The Other Side, but as these things go, it’s not going to be that easy. 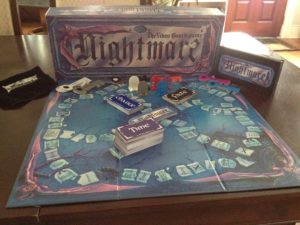 The Gatekeeper—featured on the videocassette that was packaged with the game—was there to ensure that none of the Harbingers escape. The tape ran an hour, so if nobody made it to The Other Side by the time the 60 minutes were up, the Gatekeeper won the day. Actor Wenanty Nosul who portrayed the villain is certainly not as foxy as Barbara Crampton in BEYOND THE GATES, instead resembling a dime store knock-off of Emperor Palpatine. 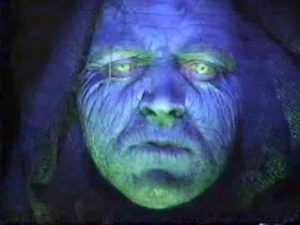 As the VHS tape never changed, game play was altered by the roll of the die (which oddly enough, was not six-sided). Once you pressed play on your VCR, the game began and the Gatekeeper breaks in periodically to punish or reward the players. Do NOT forget to answer him with “Yes, my Gatekeeper” when asked a question, or you will taste his analog wrath.

While enjoying mild success thanks to a terrific ad campaign in the states, NIGHTMARE was a huge success in Australia (because of course the people behind RAZORBACK and MAD MAX would eschew CLUE for demons and monsters), eventually leading to an ad campaign with Pepsi, a popular single, and music video. There were also expansion packs featuring the Baron, the witch, and the vampire playing Jay Leno to The Gatekeeper’s Johnny Carson.

While certainly not as terrifying as contacting Captain Howdy through an Ouija board, NIGHTMARE was a fun game to play, especially with the lights down and the volume up, eliciting plenty of laughs and scares from participants. If you’re lucky enough to track down a copy and either don’t have a VCR or don’t mind not being period accurate, the entire hour-long video is available on YouTube to play on your Apple TV. Remember, you’ve got to play to win.