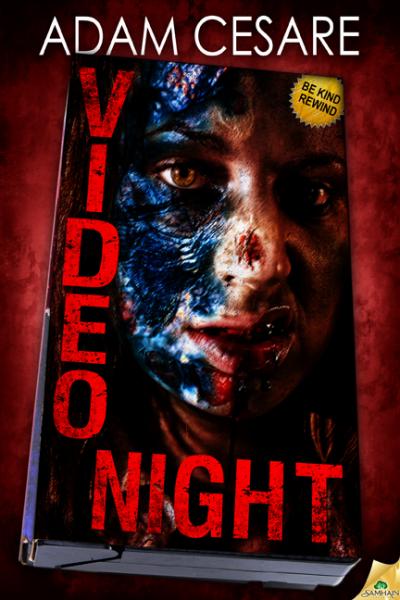 As I sat down to read Adam Cesare’s new novel VIDEO NIGHT, I had in front of me a nice warm plate of Chinese food dinner.  I had ordered the shrimp. Turns out that was an incredibly foolish accompaniment to this book.  When reading VIDEO NIGHT, avoid the shellfish dinner at all costs!  If you do not heed this warning, you are guaranteed to experience feelings of nausea, revulsion, and extreme paranoia.

That’s a huge compliment, by the way.

VIDEO NIGHT is a sharp, smart, energetic novel which pays tribute to all the brilliantly gross horror comedies of the VHS era, even as it carves out its own corners of shock literature.  Its debts and cues owe more to movies than to novels, although of course there is some Stephen King in there.  To me, the most apparent correlative, story-wise, is Fred Dekker’s NIGHT OF THE CREEPS, although Sam Raimi, George Romero, Frank Henenlotter, and in particular, Stuart Gordon’s RE-ANIMATOR get name-checked healthily – and for good reason.  VIDEO NIGHT has the giddy spirit of all the vintage 1980s gross-out horror-comedy flicks, and a fair amount of emotional depth and psychological sophistication to match.

The story will seem familiar to fans of the genre, but the set-up isn’t what makes it so fresh (“fresh” in both the insinuation of innovation and in the parlance of the era).  Thoughtful, excitable high school student Billy Rile and his much cooler best pal Tom Mathers are horror-movie hounds with a weekend routine of binging on fright flicks.  Now that Tom has a PDA-happy girlfriend, Darcy, the weekly tradition is in jeopardy, although on the night this story takes place, Tom has persuaded Darcy to invite Rachel, her friend and Billy’s major crush, to make it a foursome.  If the roiling adolescent cauldron of emotions and hormones weren’t already highly-charged enough, the entire town is quickly and quietly being taken over by vicious space parasites at the same time.  Will any of these kids survive Video Night?  (Don’t think you can predict the answer just because you’ve seen a few movies before.)

VIDEO NIGHT is a period piece, but the choice isn’t to do with simple nostalgia – what I liked so much about the book was the way it conjures a very specific sense of place.  I didn’t grow up on Long Island myself, but I do know it well, and this novel feels true to the area.  These characters feel like people you could have met in 1980s Long Island.  That’s not to say it isn’t eminently relatable.  Even if you grew up in Utah or Montreal or Guadalajara, I bet the setting and the characters would feel just as genuine.  Cesare has a talent for linking period detail to personality – when a character plays a Nintendo cartridge or deliberates over which horror flick to rent, it’s not about facile name-checking; it’s about what that video game or movie means to the character.

I liked how VIDEO NIGHT takes the conventions of movies – there’s even a grouchy cop character Tom Atkins would have played! – and uses the unique properties of prose writing to explore them.  No matter what you may have seen in the hardest-R splatterflicks, the descriptions here of the nasty alien creatures have a level of skin-crawling (and skin-peeling) detail that would be way too grisly for the screen.  Even more intriguingly, Cesare gets at the inner workings of the thought processes of the creatures in fascinating ways.  A movie doesn’t have the time or the means, but this book manages to depict the internal metamorphosis of a regular person slowly being taken over both mentally and physically by a creep from outer space.  It’s odd, queasy, sad, and funny all at once.

If I had any complaints about VIDEO NIGHT, they’d be maddeningly nit-picky to the layman. The writer in me had a minor ear-snag with two separate main characters being named Darcy and Darl – it’s not as if you’d ever confuse the two, but as a reading experience, it is a conspicuous sight on the page.  And the reader in me felt like the density of the prose very occasionally slowed down the story’s forward momentum – the descriptions and thoughts of all the characters (major and minor) are consistently rendered, but not always necessary during scenes that are more dialogue-heavy or action-heavy.  But in a pinch, better to over-describe than under.  Miniscule quibbles aside, VIDEO NIGHT is very clearly the work of a smart, perceptive writer who knows about human (and inhuman) nature.  That kind of thoughtfulness can’t be taught, and Adam Cesare has that gift.

Maybe the best thing I can tell you about VIDEO NIGHT is that the first thing I did after I finished it was to immediately pick up Adam’s previous novella, TRIBESMEN.  That one’s another 1980s period piece for the grindhouse set – the story of a CANNIBAL HOLOCAUST style film shoot gone seriously wrong.  I can’t wait.  And when I get through that one, I’ll be looking for whatever he does next.  I’ll just have to be sure to mind what snacks I choose.