I can remember hunting for

Dan O’Bannon’s name in my

We didn’t have the internet then so you had to rely on either the Leonard Maltin Guide or some good old fashion detective work. Our shop was small and cheap so I was forced to run with the latter. I just watched one of the greatest zombie films ever the night before, RETURN OF THE LIVING DEAD, and the combination of humor and terror was a cinematic punch in the mush that left a tremendous impression on me. I didn’t know he was responsible for ALIEN, I didn’t know he started his career with John Carpenter in a film called DARK STAR, and when I contacted his wife just two weeks ago, I didn’t know he passed away two years ago. 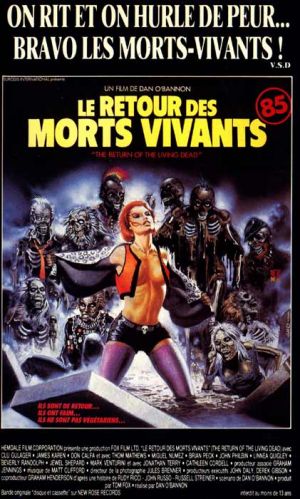 Before Dailygrindhouse.com went live, we put together a list of names:  people we wanted to interview who made an impression on us. We weren’t interested in talking to trends, but rather in game changers – people who had something to do with films that put us on a new course. O’Bannon was one of those people and his name was near the top of the list. After sending an email requesting an interview, this was my reply (in part):

Alas! If you want to speak to Dan O’Bannon you will need a clairvoyant. My husband died in December 2009 (danobannon.com).

If anyone could have a career as a zombie screenwriter, it would be Dan O’Bannon.

Mrs. O’Bannon is the late Dan O’Bannon’s wife. She does what she can to “keep him (Dan) as alive as possible, which is not very -WHAT?-” she says with her trademark humor. Our emails didn’t stop with the news (to me) of his passing. What continued over the next week was a conversation about Mr. O’Bannon and his work, both old… and NEW, culminating in a phone call with Mrs. O’Bannon for a DG interview. Here’s what went down:

DAILY GRINDHOUSE: So I know you’ve been busy, but tell our readers what you’ve been working on.

DIANE O’BANNON: Well, I have two scripts of Dan’s that I am working on. Stuart Gordon is producing THE MEN, probably beginning next year, and that’s a project that’s really pretty firm. Looks like it’s going to be shooting in Europe. It’s a men are from Mars women are from Venus type film. A woman discovers that aliens have been walking among us for half a million years. The one I am prepping now is PAIN CLINIC. I am hoping to take that out in October, and that one is the last screenplay Dan was working on. 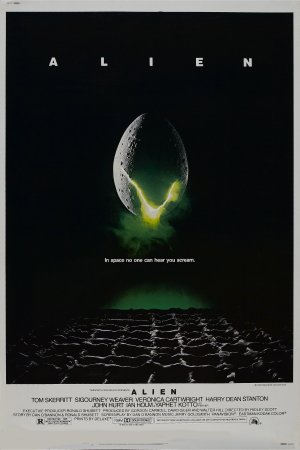 Dan decided it was impossible to get these giant films like ALIEN made. You just can’t get the budget for that very easily and he wasn’t successful with some of his scripts that would have been moderately budgeted at 25-30million. So he started writing really low budget horror. Good horror that could be done at a low budget. Something that could tingle your spine but could still be made at a low cost. More psychological than slashing and goo.

DG: And what’s PAIN CLINIC about?

DO: It’s about a guy who has back pain and seeks help for it but then gets caught up with the wrong doctor. He was really inspired by his own illness and how you could become trapped in your own body.

DG: Do you have any directors in mind who you would like to see take on that project?

DO: One of Dan’s friends from college, his son Brett Hart is a director. He’s been doing award-winning commercials, and he put together his own film BONE DRY, which was really spectacularly done and he’s a really energetic guy. We were meeting with him one day and I said why  don’t just give this to Brett to see if he can take that around and get the excitement going. It should be a low enough budget to produce that it would be feasible with the O’Bannon name to get it out there so people can see it.

DG: Are you doing some of the punch-up on that to get it ready to shop?

DO: Yes, well, Dan hadn’t made the last pass on it. So I am just now finishing it up and we will see what Brett can hustle up with this. I want to be flexible in terms of what gets re-written or changed in the screenplay, but I still want to preserve the work. Dan’s screenplay structure was sublime, and I want to see that preserved as much as possible, but still be flexible. I think anybody approaching a Dan O’Bannon screenplay – especially Stuart Gordon who is directing THE MEN and Brian Yuzna who is producing – at this point has a good amount of respect for his contributions.

DG: It’s really great to hear that Dan still has work out there that we will get a chance to see. Did he have any other scripts that he was working on in addition to the two we talked about?

DO: Well, I have a couple others that I would love to see done. One isn’t a horror film, but it’s a really exciting adventure film called THE HEAD OF JOAQUIN MURRIETA. He was a bandito (also known as the Mexican Robin Hood), a real person, and the governor of California sent out a posse to get him because he was causing so much trouble in the gold country. It’s a really fun screenplay that has one of my favorite openings of all-time, that I’ve never seen of course, but it starts out in San Francisco with the earthquake in 1908. The shaking starts and you go up to this store front window filled with all these curios and you see this head in a jar. Then the building shakes and the jar falls and the head goes up in flames. So, the film starts with the head of Joaquin Murrieta being destroyed in the San Francisco earthquake. Anyway, it’s a fun script and I would love someone to do that. Be great to get that one to Freddy Rodriguez.

There is also one called THEY BITE, but I think we are going to call it THE OMNIVORE, but that’s a science fiction one. Kind of sci-fi horror about creatures that re-emerge after a 65 million year life-cycle and that one takes place in a dessert at an ecological dig. That one is around to a couple of places but no bites yet.

The other thing, though, that I really want to keep in front of people is that Dan did complete a version of The Necronomicon and we are going to be putting that out.

DG: Can you give us a feel for that project?

DO: It’s very interesting how he did this. He has a backstory on how he found it. It’s actually the dissertation of a PhD student. Alejandro Jodorowsky told Dan that it existed in Sarbonne (University of Paris library) and he went and found it. Now the student -the PhD student who wrote the dissertation – vanished. Nobody knows what happened to him. So, Dan felt free to take the information and use it. The PhD student actually found The Necronomicon. He wasn’t a believer, but he did the most research on it, so Dan is basically putting out his version of the dissertation.

DG: It sounds like that story alone could be a film. You mentioned Alejandro Jodorowsky, can you talk a little bit about DUNE and Dan’s feelings on that project?

DO: He had a great time over there. He felt it was a shame it didn’t go. It was really fantastic. But, that’s where Dan met Rudy Giger (H.R. Giger), and Dan was a good artist himself, so he liked talking to artists and promoting their work. So Dan brought some of Giger’s work to Ridley and said you have to use this guy, and nobody has seen this stuff before and it’s going to kill everybody and so it did.

DG: Dan’s work, structurally, is really brilliant, and I am always curious to know what films people like Dan appreciated.

DG: Yeah, I don’t know many people who did.

DO: I still stop and watch GODFATHER when I see it on television. His favorite director though was Kubrick. Dan had a really interesting take that he felt all of Kubrick’s films where comedies.

DG: That’s really interesting; do you know how he built that opinion?

DO: If you look at DR. STRANGELOVE, which is a very fine film, you can see he has a really good sense of humor, and Dan would laugh at BARRY LYNDON. If you watch BARRY LYNDON and approach it as a dry comedy, it really works. The same with 2001, there are parts in that film that are completely hilarious if you see it as a comedy, but then he also thought KAFKA was also comedic.

DG: DARK STAR was both John Carpenter and Dan’s first feature film. How did they meet?

DO: Well, they were both at USC film school and Carpenter asked him to work on it. The film was very amorphous at the time but Carpenter wanted to make a sci-fi film about truck drivers in space, that was the concept, and Dan wrote up the script.

DG: Dan has such a tremendous body of work: ALIEN, TOTAL RECALL, RETURN OF THE LIVING DEAD – anybody would be happy to have one of those films. What was he most proud of?

DO: Gee, I don’t know. He was critical of everything. He didn’t have that much to say about his own work. You know, he thought things could always be better. He loved ALIEN and felt really lucky to work with Ridley Scott, and I think Ridley felt the same way. Dan felt that was a really good collaboration. He didn’t particularly like the ending of TOTAL RECALL because the character never has TOTAL RECALL. 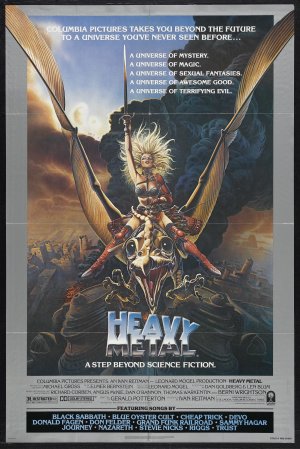 DG: What would Dan think about TOTAL RECALL and HEAVY METAL being remade?

DO: He only did a few little things for HEAVY METAL so he never felt particularly attached to that. But why do they keep remaking these things? I have two perfectly good scripts right here, but I hope the new TOTAL RECALL is a good film and wish Neal Mortiz great success with it.

Dan didn’t like to re-do his stuff. That’s one of the reasons he wrote THE HEAD OF JUAQIN MURIETA. He said “maybe this will keep them from doing another goddamn Zorro. “

DO: Anything else you want people to know?

DG: Just that I am working hard to get his stuff out there. I will be announcing his projects on the official Dan O’Bannon Facebook page.
And we couldn’t be happier about it.

And there you have it. One of the greatest screenwriters of all-time may still be busting out a few more pictures. You just can’t keep a good zombie down.