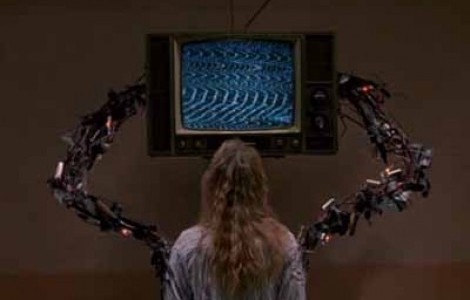 Welcome to another countdown of grindhouse madness! This time we’re looking at the top ten television terrors — no, not made-for-TV movies (that’s way to broad to pick just ten) but the top ten flicks where THE EVIL IS COMING FROM INSIDE THE TELEVISION! TURN IT OFF! TURN IT OFF!

First, a proviso. POLTERGEIST isn’t on the list, because he television itself, for all its’ importance in the film, isn’t the cause of the havoc itself, and as a communication tool, it’s actually helpful. Films like A NIGHTMARE ON ELM STREET 3 and 976-EVIL 2 contain one great TV death-related scene a piece, but the television isn’t the main focus of the movie. Also dropped is MURDER BY TELEVISION because nobody gets murdered by a television. Somebody should sue.

So set your clickers to “stun” and jump in!

Lamberto Bava’s sequel to his own horror semi-classic isn’t talked about with the same respect as the original, mostly because it’s just a retread in a different location, with some of the same cast in different roles.  Instead of a theater showing a film about the discovery of an artifact that brings demons to life becoming a slaughterhouse of gory, demon-related carnage, the film shows up on a TV broadcast, causing demonic possessions to occur in a highrise.  It’s not great, but it’s still fun in a trashy sort of way, and the moment when the first demon makes its’ way out of the television is still pretty memorable.  Go for the original VHS cut if you can find it, which features more music (from the likes of The Smiths, Art of Noise and Peter Murphy) and is instantly indentifiable by a growling sound effect when the title pops up.

Similarly, THE VIDEO DEAD sports an evil that comes directly out of the TV and goes from there, as a writer receives a TV that only seems to show an old black and white zombie movie, even when not plugged in!  It’s only a matter of time, of course, before the zombies make their way out of the set and wreak havoc, and only a pair of siblings can figure out what to do.  Thanks to Shout Factory, this zombie horror flick is finally making its way to DVD and Blu-Ray in 2013, but if you’re anxious, it’s also on Netflix streaming. 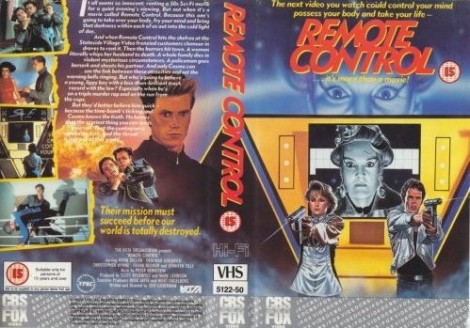 A great relic of the era of the video store, Jeff Lieberman’s last feature until SATAN’S LITTLE HELPER 16 years later stars Kevin Dillon as a videotape slinger whose store just got in a batch of a new film called “Remote Control,” complete with a giant moving display. (As a former video clerk, I can attest to the fact that at one time, video releases were promoted with great ballyhoo, and I still have a giant standup for FRIGHT NIGHT PART 2 to prove it.) He soon finds out that the tape contains an old ’50s sci-fi movie that causes people to become deranged murderers! Lieberman gives it a ’50s sci-fi feel itself, even clothing Dillon and co-star Deborah Goodrich is goofy space costumes. Jennifer Tilly and Bert Remsen also star in one of the few occasions you’ll have to watch a movie in which people watch a movie about people watching a movie. 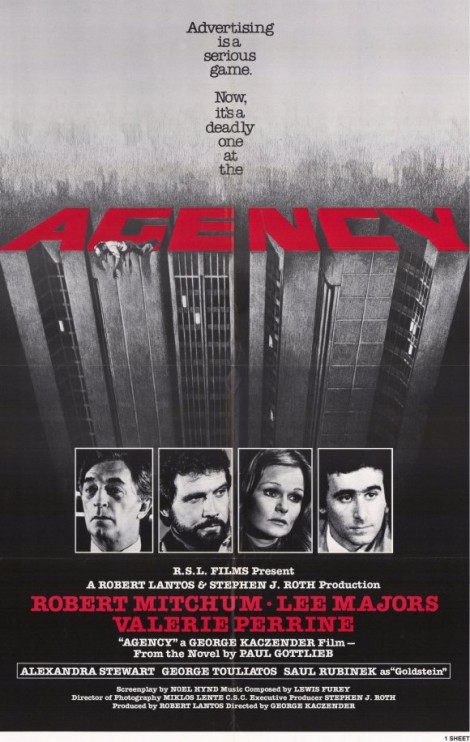 Lee Majors plays an advertising jingle writer whose company is taken over by a millionaire (a cigar-chomping Robert Mitchum) whose plans start off with replacing all of the execs with his own people, and continue with having the company use subliminal messages in their commercials in order to get a corrupt politician elected with the use of their mysterious Floor 28.   A surprisingly clever thriller, especially considering it was made as a Canadian tax dodge.   With Valerie Perrine and Saul Rubinek, and directed by George Kaczender, who had a string of solid, now-obscure little flicks like IN PRAISE OF OLDER WOMEN, YOUR TICKET IS NO LONGER VALID and THE GIRL IN BLUE.

It’s not an easy film to defend, what with some awkward acting, a fair share of dead time and a jingle so catchy you’d think Lee Majors would have come up with it, but Tommy Lee Wallace’s interruptional sequel about the plot of an elderly Irish warlock’s plan to use Halloween masks that will cause the wearer’s head to be consumed when they watch a special presentation on Halloween night is still weirdly compelling.  Most of the credit goes to John Carpenter’s memorable music and typically top-notch performances by the ever-growly Tom Atkins and the scenery-chewing Dan O’Herlihy.

Also coming soon from Shout Factory is the Charles Band-produced horror-comedy about an alien that gets transferred through a satellite TV into the home of a suburban swingers’ couple.  Ted Nicolaou’s first solo feature is gleefully ridiculous, and it somehow works, thanks to a great cast of character actors including Diane Franklin, Jon Gries, Mary Woronov, Bert Remsen, Gerrit Graham, Alejandro Rey, Randi Brooks and a pre-teen Chad Allen, and a nifty theme song thanks to The Fibonaccis.

Time and distribution has not been overly kind to Michael Crichton’s tale of high-tech brainwashing in the modeling industry, as trimming the film down for theatrical release caused some plot holes to be unfilled, but the television cut (or ideally, the composite cut that’s been floating around the more sketchy areas of the internet) is definitely worth a look.  Albert Finney stars as a plastic surgeon whose model clients start getting offed mysteriously, and the trail leads to a shady computer company called the Digital Matrix.  Might it have anything to do with subliminal messages?  (Hint: Yes.)

In Ed (BLOODY BIRTHDY) Hunt’s homage to ‘50s sci-fi flicks, Tom Brenznahan (kind of a substitute Zach Galligan with his leading roles in this and TWICE DEAD) plays Jim, a prank-laying high school kid who is forced to take part in therapy performed by television show host Dr.  Blakely, played by RE-ANIMATOR’s David Gale.  Little does Jim realize that Dr. Blakely is slowly hypnotizing people via his show, thanks to the GIANT MAN-EATING BRAIN IN THE LABORATORY!  Filled with hallucination sequences that wouldn’t be out of place in an ELM STREET sequel and featuring Gale in top form, this really needs to get a DVD release eventually.

The premise of Hideo Nakata’s RINGU, a videotape that, when watched, will mean that the viewer will die within 7 days, has become so well-known that it’s entered the general cultural lexicon, but it wouldn’t have been more than a cult curiosity within the U.S. if Gore Verbinski hadn’t done such a decent job with the American remake THE RING.  One of the few remakes of a foreign horror film that seems to know what to keep in terms of imagery and tone while tweaking it to be more accessible for American audiences, THE RING may not be as effective as RINGU, but it’s still a solid ride, and significantly better than the similar Asian horror remakes that followed.

Probably the most ridiculous film on the list, this absurd comedy is about par for the course for director Arch Oholer, the man behind the high-concept 3-D “classics” BWANA DEVIL and THE BUBBLE and the post-apocalypse drama FIVE.  Hans Conreid plays Kerry West, a man whose wife buys him a standing TV because she’s going away for the weekend and thinks he’ll be lonely.  Unfortunately for Kerry, the TV turns out to be a time-displaced creature in disguise, who wants to do everything it can to please is’ new master, wandering around on four legs!  Kerry goes to his coach friend for help, who tries to convince him he’s hallucinating and tells Kerry that it’s like how he can’t see women without thinking about French fries.  Laker, the TV thinks Kerry is lonely, so it calls the operator and demands women, causing the police to come to the house thinking that he’s running a brothel.  Things get weirder from there.

What, like this wasn’t going to be number one?  Long live the new flesh, everyone.