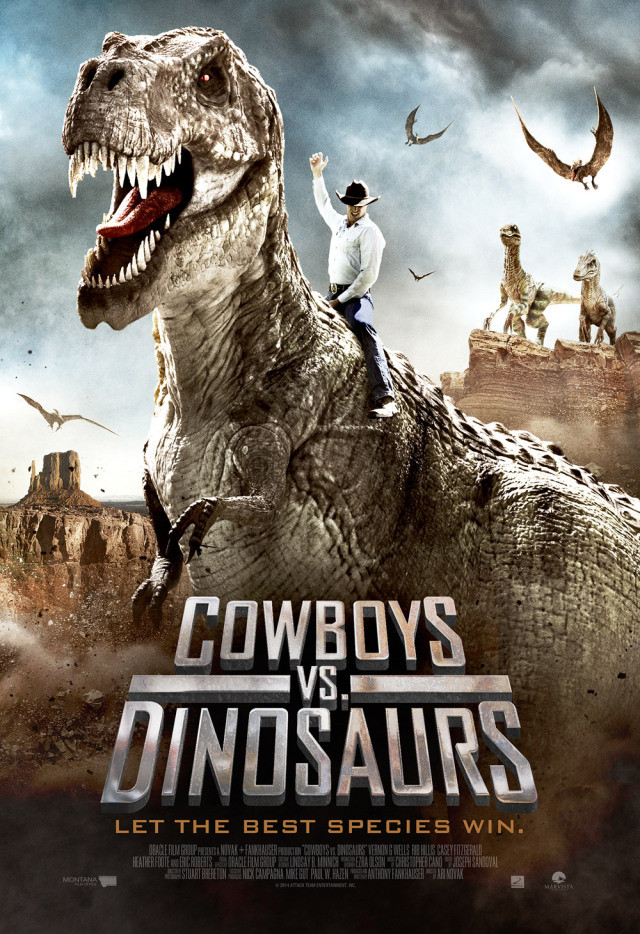 I don’t know why movies like this exist. I mean, yeah, I know WHY they exist. Apparently these paint-by-numbers, safe-for-TV movies do boffo business on Syfy or whatever. But COWBOYS VS DINOSAURS wasn’t — to my knowledge — made for television. So, it’s an imitation of something that is already a watered-down version of an old-school monster movie. Sure, there are campy moments and a few recognizable faces, but it still feels like a piece of work that is constantly holding back in the hope of being played at 3pm on a weekday on basic cable.

Am I being cynical? Maybe. Let’s take into account that this movie was originally blessed with the much less intriguing — and less campy — title JURASSIC HUNTERS, but was later repackaged as the much-more-Syfy sounding COWBOYS VS. DINOSAURS after some less-than-enthusiastic initial response. And it worked! Nobody gave a damn about some dopey action movie with dinosaurs, but pump in the mental image of Clint Eastwood gunning down a pack of velociraptors and then you have something. That something, however, is not actually contained in this movie. 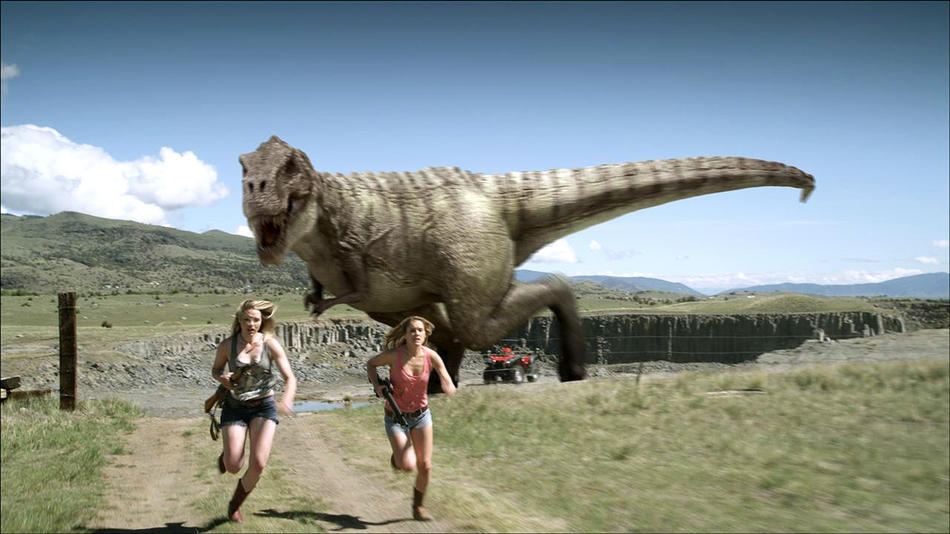 But I don’t mean to bury this slice of prehistoric schlock entirely. While its first half is altogether too serious, and features an endless parade of blandly attractive leads with too much backstory and not enough charisma, things pick up in the second half when the terrible (TERRIBLE!) CG starts pouring in, and the cast breaks out the heavy firepower. Of course, this is 2015 so instead of squibs and blanks we have none-too-convincing computer generated muzzle flashes. There are even a few iffy, computery explosions for good measure — usually leading to some poor methane-infused dinosaur blowing sky-high. So let’s talk turkey. And, by turkey I mean DINOSAURS. If you’re hoping for these creatures to be realized through a perfectly balanced mix of physical effects and CG you might have skull trauma, as director Ari Novak is no Spielberg. Instead, these “terrible lizards” appear to have been beamed in from a first season episode of XENA: WARRIOR PRINCESS. Not only do they move (and JUMP) in a stilted, unconvincing manner, but they often appear to be floating as they traipse across the attractive Montana landscapes.

I know you’re dying to know the plot, so here it is. Former rodeo star Val Walker (mannequin-ish Rib Hillis) has returned to his Montana home after an accident years before sent him into a drug and alcohol-fueled spiral that culminated in him smacking around his girlfriend Sky (Casey Fitzgerald) and bolting. He quickly runs afoul of Sky’s new beau Henry, who is the town’s Sheriff AND is so old that I spent most of the movie thinking he was supposed to be Sky’s father. Henry has his hands full since he’s in the pocket of a local mining company who have accidentally unleashed a stampede of raptors from inside a nearby mountain. The only one consciously battling the creatures is the suprisingly capable Quaid (Kelcey Watson), an employee of the mining company and a former friend of Val’s. An attempt by the miners — spurred by the evil owner of the mining corporation (played by the always awesome Vernon Wells) — to blow another hole in the mountain leads to a bunch more dinosaurs (including a T-rex and that Triceratops up there) attacking the city, and our group has to work together to put an end to this dinomania.

If you’re guessing that it will all culminate in Val eventually riding a dinosaur as if it was some giant bucking bronco, then you’ve probably looked at the poster at the top of this page. I won’t spoil it for you, but it looks AWESOME(ly horrible).

Acting is pretty weak from the leads, except for Kelcey Watson, who is clearly giving more effort than this material deserves. Star power is brought by Wells, who plays the company man Marcus as a conniving, moustache-twirling baddie, bringing some much needed life to his scenes. Also on-hand for a couple of vomit-filled sequences is ERIC ROBERTS as Val’s alcoholic, constantly imprisoned father. He only has about five minutes of screen time, and spends most of it puking into a bucket, but just check out that smile! 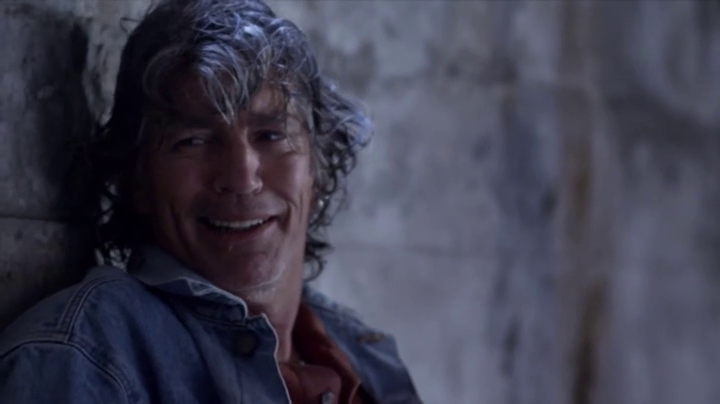 So, yeah, COWBOYS VS. DINOSAURS is fine if you’re only interested in the BEAST bit of BLOOD, BOOBS and BEAST. A few people get sliced up (with a brief look at some internal organs) and a couple of unlucky folks get bitten in half, but it’s all rather bloodless, and it relies so heavily on computer-generated FX that there just seems to be no artistry to any of it. That will probably make a few CG artists upset, but I’m not sure COWBOYS VS. DINOSAURS is the cross you want to die on. If you’re with a group of people DETERMINED to have fun with it, then you’ll probably be able to wring out a few laughs, but the rest of us will continue to wait for something more fun, more ridiculous, and more gleefully excessive.