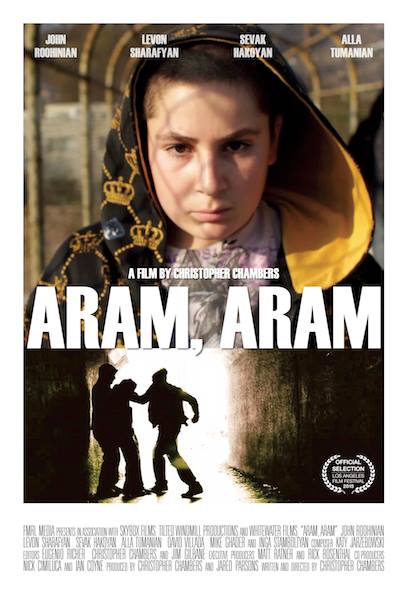 So this is slightly different subject matter than we usually cover on Daily Grindhouse, but we love to spotlight people, places, and things you’ve never seen on screen before, and ARAM, ARAM definitely qualifies.

ARAM, ARAM is set in the Little Armenia neighborhood of Los Angeles, where a massive amount of L.A.’s sizable  Armenian population resides. Notable Armenian émigrés and Armenian-Americans include Rouben Mamoulian (director of 1931’s DR. JEKYLL & MR. HYDE), A. I. Bezzerides (screenwriter of KISS ME DEADLY and THEY LIVE BY NIGHT), Ross Bagdasarian (creator of Alvin & The Chipmunks), Sid Haig, Cher, Andre Agassi, Kim Kardashian, and all four members of System Of A Down. If you live in Los Angeles, you have likely been exposed at least in passing to Armenians and their culture, but from the mainstream movies that get made in that city, very little of that culture is truly represented — ever. Filmmaker Christopher Chambers has changed that with his first feature film, which delves into the world of Little Armenia through the eyes of 12-year-old Aram, who arrives in the United States to live with his grandfather and who soon experiences a culture shock, in part involving how the local Armenian population interacts with their Hispanic neighbors. This being the 100th anniversary of the Armenian genocide, ARAM, ARAM comes at a time when mainstream America could use some education on this history and culture.

Full disclosure: I consider Chris to be one of my best friends, one of my favorite human beings on the planet, and in fact for several years we were roommates in Los Angeles, right down the street from Little Armenia. In addition to writing and directing ARAM, ARAM, Chris has a remarkable visual ability, having shot thousands of shorts and commercials. So sight as yet unseen, I can promise you this is a quality film, particularly since one of the editors is another of my favorite and most talented friends, Jim Gilbane. I can’t wait to see ARAM, ARAM myself, but I’m thrilled to do whatever I can to help get the word out because I’m proud to see good people out there making movies all of us can feel good about. But you don’t have to take my word for it!

Here’s a scene from the film:

ARAM, ARAM is playing the Los Angeles Film Festival today, June 14th. That’s short notice, but the screening is sold out anyway. We’re telling you about it now so you can keep an eye out for it in the future. Something tells us you’ll be hearing lots more about it again.