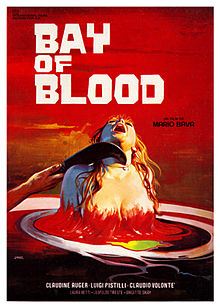 Title: A BAY OF BLOOD 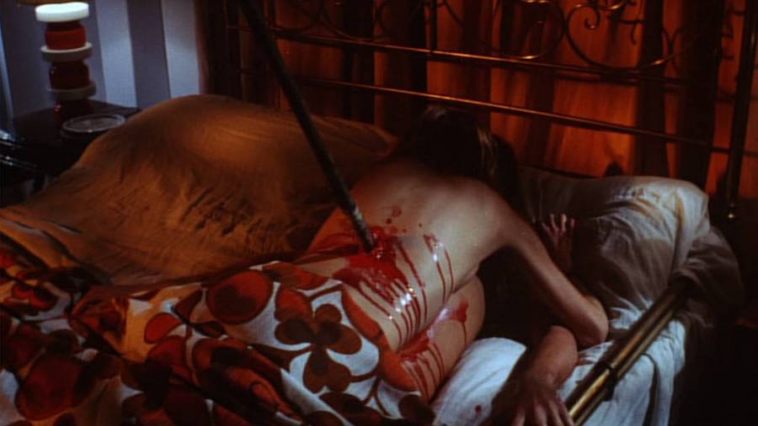 Billhook to the throat

Billhook to the face

Scissors to the groin

Faithful readers at Daily Grindhouse are likely familiar with the term “giallo.” Many films carrying the term frequented 42nd Street theaters in their heyday. From the Italian word for yellow, it’s a nod to the genre’s cheap yellow-jacketed pulp novel beginnings. The giallo films of the 1970s directly influenced American horror cinema for years to come, and there’s no bigger example than that progenesis of what many all the first slasher film, Mario Bava’s A BAY OF BLOOD. 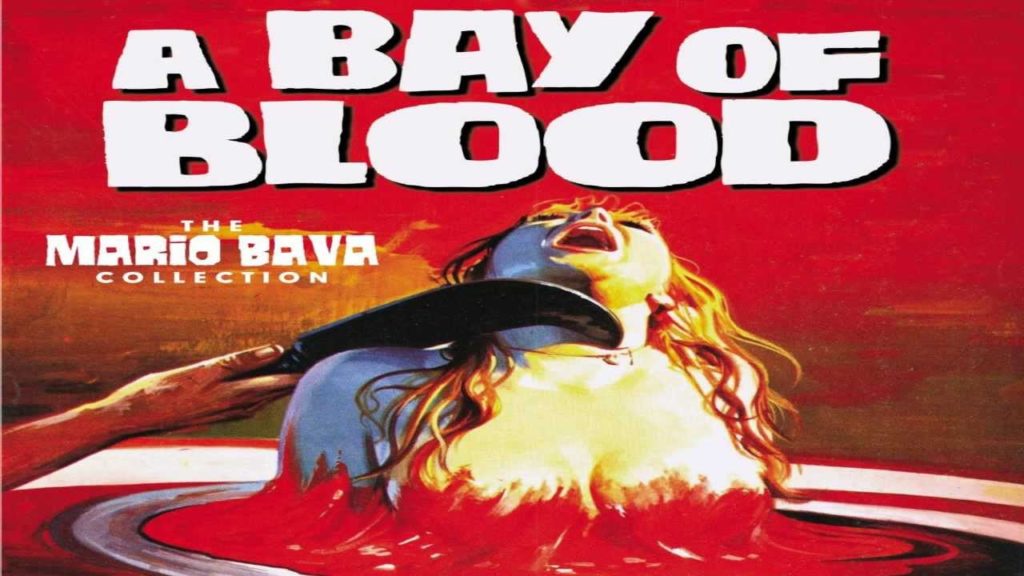 The murder of the Countess Federica Donati, an aging heiress, leaves her spacious lakefront property up for grabs. As claimants to the property and fortune arrive, the body count starts to rise in a gruesome killing spree born of covert personal agendas. It’s not a spoiler to say that there are multiple killers in this film, because its apparent in the first 10 minutes that anyone who might be next in line to inherit the Countess’ spoils is a high priority on the kill list for literally everyone else in the movie. It’s an 84 minute free-for-all, with a total of 13 murders, each one more out-of-left-field than the last.

The opening scene sets the stage for the film entire. Amid flowing drapes and ornate candelabras on a dark, stormy night, The Countess is framed wide in a brooding painting of the Gothic imagery that Bava is known for. She looks out into the tempest outside her window while Stelvio Cipriani’s (often invasive) score mirrors her melancholy mood. The swell of violins is cut short as the Countess is then pushed from her wheelchair and hanged in her own parlor. A figure emerges from the shadows; her husband. As he approaches her lifeless body, he is stabbed multiple times; his white dress shirt blossoms with blood. It’s a bewildering introduction that perfectly lays out the dark humor and ultimate futility of the plot, two notions that repeat throughout until the final credits roll.

Critically speaking, the film is all over the place. A rock-bottom budget took a lot of wind out of Bava’s sails, forcing him to act as his own cinematographer and even use a little red wagon for dolly shots. The lakefront home featured in the film belonged to a friend, and didn’t actually have a forest surrounding it as the script had called for. Bava made use of every camera trick he knew in order to transform the few scant trees near the house into plush foliage, including shaking saplings in the periphery of the frame while keeping shots airtight and zoomed. Critics noticed, and called the director out for straying from the grand Gothic aesthetic for which he became known and admired. Christopher Lee, who starred in Bava’s previous BDSM-friendly work THE WHIP AND THE BODY, was reportedly repulsed by the carnage on display in Bava’s latest. While the setting may have changed, the same wistful tone is present for those who care to engage with the nasties. Unlike, say, FRIDAY THE 13TH, the murders have a note of contemplation in them. It’s in the lingering moments after the victims meet their maker, as ticking clocks and tweeting birds can be heard, that Bava’s presence is felt. As a woman lay lifeless after her grand scheme fails due to an out-of-nowhere ambush, it becomes clear: the death scenes, while confrontational, allow for the futility of the entire situation to quietly diffuse. In that respect, the absolutely bonkers chain of events makes sense, like order from chaos.

A BAY OF BLOOD’s greatest advocates readily admit that the plot is largely nonsensical and distant, and it is. Everyone is both a victim and a killer, and there’s no singular character to rally behind. The only people who garner any amount of sympathy are a pair of young children and a meek entomologist, and both are underutilized in that respect. This is definitely a “style over substance” experience, but it’s an accord that fans are willing to enter for the sake of the film’s influential weight.

For a film from a mainstream director, A BAY OF BLOOD was unprecedented in its violence at the time. Every killing scene is a work of inspired composition; under the blows of axes, spears, and billhooks, the victims writhe and flop as they gasp their final breaths in the best light possible to capture the senselessness in life expired. Rather than cut away, the camera lingers, both to hone in on the blood and guts and to gaze upon the body entire in a series of close-and-wide shots. The carnage is secondary to its picturesque aesthetic and yet the copious blood flow only adds to the macabre tranquility of every character’s demise. Carlo Rambaldi created the gory special make-up effects, showing a talent for the visceral aesthetic that audiences would later see again in ALIEN (1979), for which he would nab an Oscar.

The marketing for A BAY OF BLOOD was handled by Hallmark Releasing Corporation, the same masterminds behind the “It’s only a movie” phrase used to promote THE LAST HOUSE ON THE LEFT (1972), a phrase immortalized among horror aficionados. In his book Shock Value: How a Few Eccentric Outsiders Gave Us Nightmares, Conquered Hollywood, and Invented Modern Horror, Jason Zinoman observes: “The crucial insight of Hallmark’s marketers was that you can get away with anything if you do it in the name of art. And nothing telegraphed artistic seriousness like European cinema.” The distribution giant dealt exclusively in lurid exploitation and when A BAY OF BLOOD needed an American re-release, the suits at Hallmark Corp. Had the title changed to TWITCH OF THE DEATH NERVE and jumped right into the carnival barker sales pitch. The tagline read, “Diabolical! Fiendish! Savage…you may not walk away from this one!” According to ads, punters were required to give a personal warning to every patron before each showing. Radio spots hyped up the shocking nature of the film’s content in grave terms. It all served to put the cheap thrills and blood spills front and center, which put Bava’s movie on the radar of Whitehouse and her motley crew of moral crusaders. The successful sensational marketing of Hallmark Corp., combined with Carlo Rambaldi’s convincing effects work, earned A BAY OF BLOOD a snug spot on the Video Nasties list. It was prosecuted under the Obscene Publications Act and subsequently banned, though an edited version of the film was released in the UK in 1980, with 43 minutes cut from the original footage.

Bonus trivia: In an odd attempt to capitalize on the surge of gritty grindhouse horror in American cinema, A BAY OF BLOOD was temporarily retitled in some regions as LAST HOUSE ON THE LEFT PART II for its American re-release a couple of years later, despite having absolutely nothing to do with Wes Craven’s 1972 exploitation film. 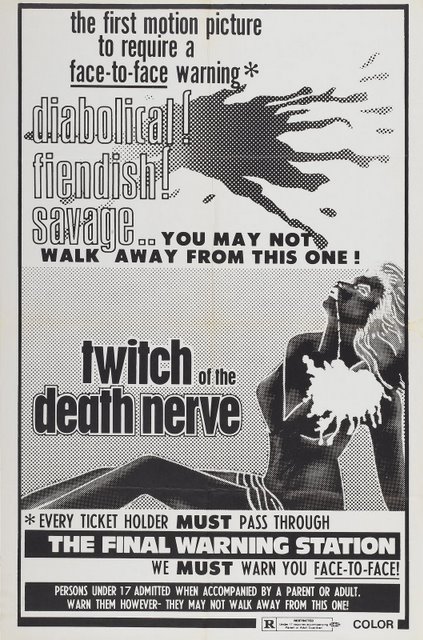 Horny teens. Emphasis on kill scenes. Confrontational visual/makeup effects. Killer POV. Twist ending. Many of the deaths portrayed in A BAY OF BLOOD were influential; fans of FRIDAY THE 13TH PART II will recognize the speared young couple and the victim who catches a sharp tool with his face. Other imitations of BAY OF BLOOD’s “young nubile bodies start dropping in the woods” formula include THE BURNING and DONT GO IN THE WOODS. The killer POV shots were nothing new in 1971, as Michael Powell’s PEEPING TOM utilized them to great effect over a decade earlier. But by placing the audience in the killer’s position, combined with the stylistic elements of classic murder-mystery giallo, Bava imbued the film with a quality that the next generation of filmmakers scrambled to emulate in slashers for decades to come. The film is largely credited with catalyzing the “body count” formula that swept slasher horror during the 1980s, and is now considered one of Bava’s better late-career efforts.

Straight up: If you’re a Bava fan, this is still Bava-esque and contains the same core elements you know and love, just not in a castle and without Barbara Steele. If you’re a horror fan, this is a foundational work that most slasher staples derive from. It truly lives up to the tagline and stands up to repeat viewings, as long as you don’t let the plot get in the way of a good time. 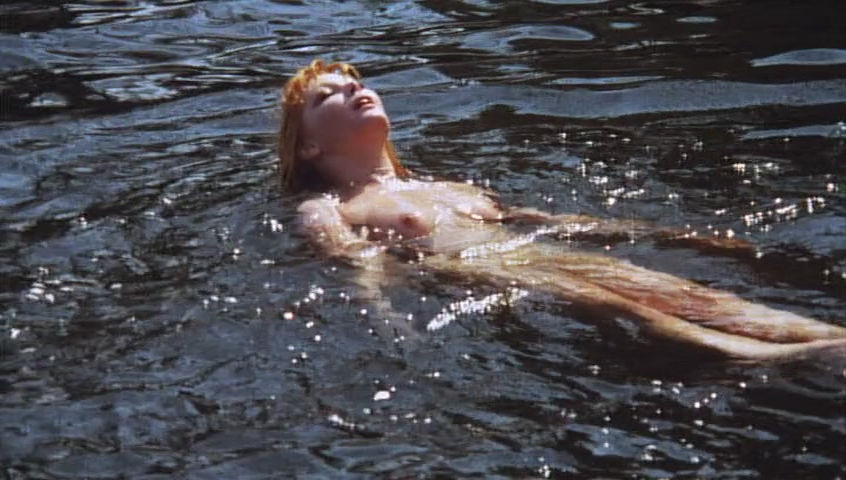