[This article contains minor spoilers for each title.] 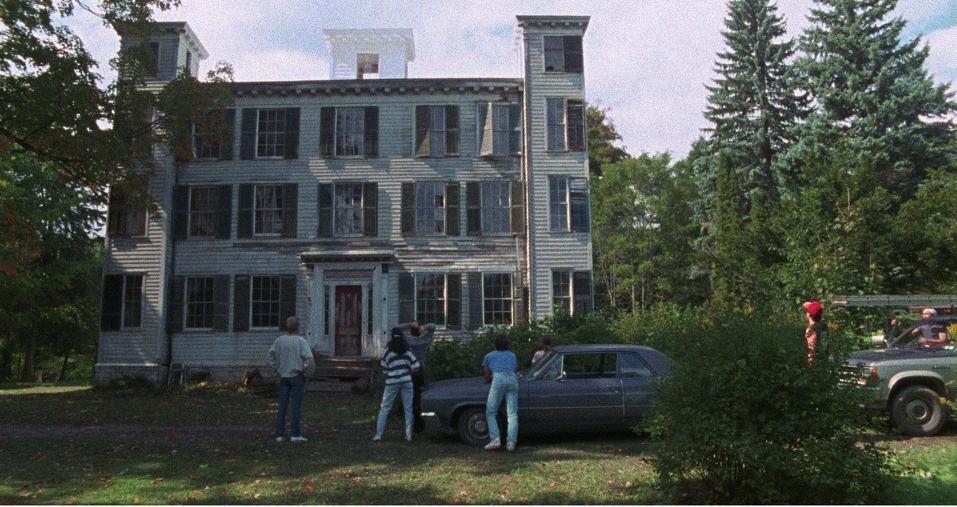 The concept of a haunted house and slasher hybrid, which sees your typical masked slasher villain take a backseat to a murderous house filled with ghosts and/or demons and/or witches doling out the bloody comeuppance, wasn’t exploited nearly enough. This brief movement likely came in response to how well haunted house flicks like THE AMITYVILLE HORROR and its sequel, THE POSSESSION, along with THE SHINING and THE CHANGELING, were cleaning up at the box office during the ‘80s era of the slasher, which made the concept of combining the sub-genres into one film very alluring. Sure, haunted house flicks are a dime a dozen, and sometimes they off a few cast members, but how many can you name where a hapless victim gets chewed literally in half by a window? While I want to believe there are many more, I can only name you two: 1982’s SUPERSTITION and 1989’s THE HOUSE ON TOMBSTONE HILL. 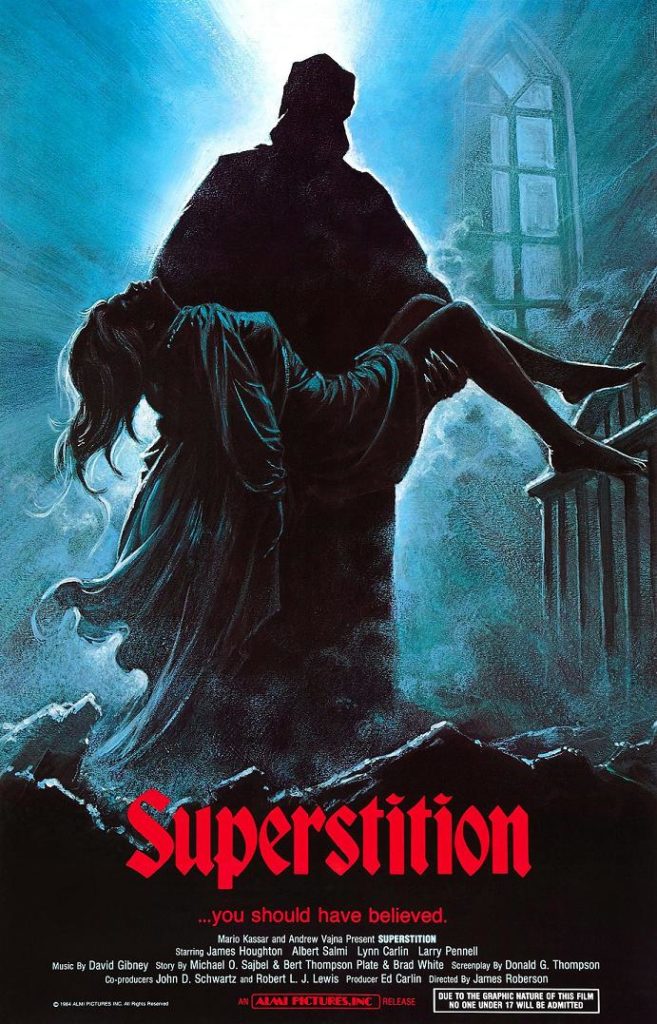 SUPERSTITION was completed in 1982, but sat on the shelf for four years before it opened in the UK, preempted by a trailer that retitled the film as THE WITCH and which featured narration by eccentric actor Brother Theodore (THE ‘BURBS). Helmed by cinematographer James Roberson, it’s clear right away that SUPERSTITION is intent on mining from the stalwarts of the slasher, opening with a teen couple doing some car kissing in the middle of nowhere. “You said you loved me,” the boyfriend says, his hand solidly on his hesitant girlfriend’s chest, but there’s no time for love, because a monster head is suddenly thrust into the car’s open window, sending the teen couple speeding off. Turns out the monster head comes courtesy of a couple prankster teens who have chosen the house — a house, mind you, that’s infamous for its bloody past involving the drowning execution of a witch — to just…hang out in, I guess. (Don’t miss the UNSOLVED MYSTERIES-caliber wigs and stick-on facial hair during the flashback witch scene, by the way – they’re hysterical.) The teens don’t have long to celebrate their successful prank, as the house comes to life and dispatches them in graphic and gooey ways. 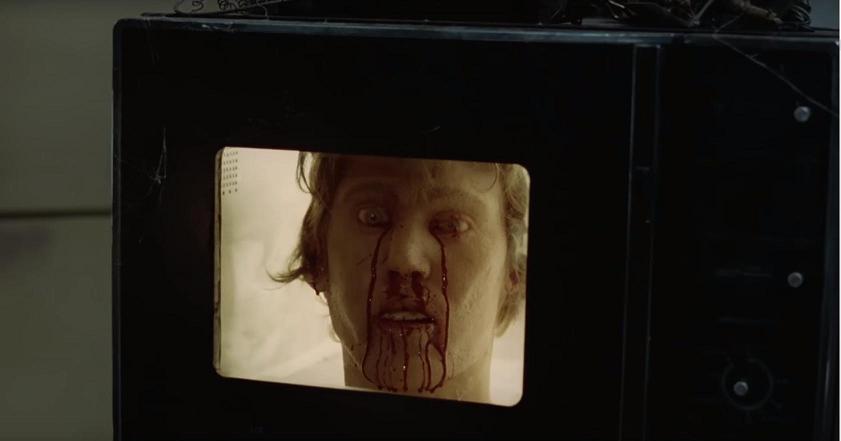 After firmly establishing its slasher roots, SUPERSTITION moves on to steal its plot from THE AMITYVILLE HORROR, including having a priest out to the house to bless it, only for the house to, er, politely decline the ceremony. However, this time, instead of hordes of flies, a wayward circular saw blade detaches from a table saw, bounces across the floor, and slices directly into the priest’s chest, magically and impossibly spinning/cutting the entire time. Before you can say “Father Pieces,” we meet a trio of young people, including a pair of girls who wear the skimpiest of summer attire. Despite a cast of mostly adult actors, the presence of young people helps FRIDAY THE 13th the proceedings a bit, being that, in this genre, if you’re old enough to drive but not legally drink, you’re probably a goner. As expected, everyone begins to die very graphically.

Despite a pre-credits running time of 82 minutes, SUPERSTITION still runs a hair too long, falling victim to second-act lag as many horror films of this pedigree tend to do. Still, the pace is mostly assured and there’s always a fresh body drop to liven things up when the story begins to stagnate. Except for one off-screen kill (likely because the victim was a child), every death is fully shown, very bloody, and, when we’re lucky, relies on a dummy — my favorite kind of kill. 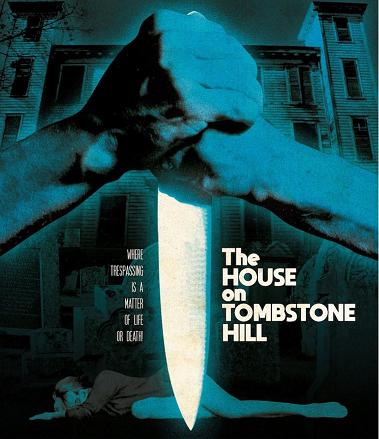 As for THE HOUSE ON TOMBSTONE HILL (originally titled THE DEAD COME HOME, and later retitled on home video as the far superior/far stupider DEAD DUDES IN THE HOUSE), well, I fucking love it with equal parts sincerity and irony. One of maybe three watchable titles produced by Troma Entertainment (home of THE TOXIC AVENGER), THE HOUSE ON TOMBSTONE HILL inspires the same feelings of enjoyment, awe, amusement, and total bewilderment as the 1979 slasher film TOURIST TRAP, entirely because of the oddness factor. As THE HOUSE ON TOMBSTONE HILL unfolds, you honestly can’t tell if director James Riffel (hey, another James!) is in on the joke or not, and that’s my kind of jam. During the film’s opening/prologue, we see the murderous Abigail Leatherby, who has just killed a man, walk back and forth across the living room, hunched over her cane, apparently coming to turns with what she’s done, all while her teenage daughter sits on the couch completely nonplussed and sipping a drink. You’ll watch Abigail walk back and forth so many times, uninterrupted, in one single shot, without a single line of dialogue, as jaunty piano music plays on a loop, that you’ll realize you’re about to watch something very, very special. 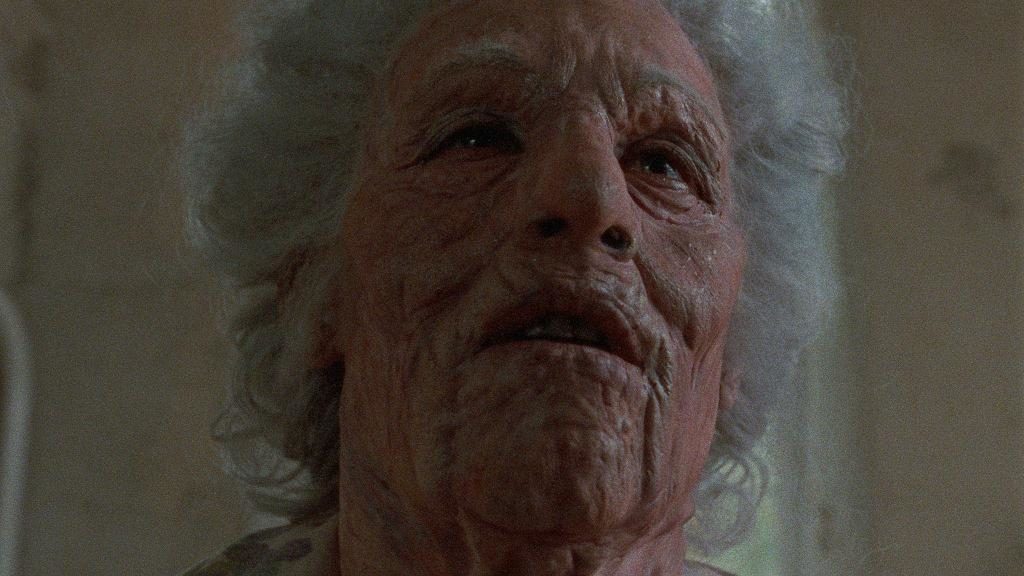 Like SUPERSTITION, THE HOUSE ON TOMBSTONE HILL wasn’t released right away following its production in 1988, though it was eventually relegated to cable and VHS under its new title. (Like most Troma productions, it was shot in New Jersey, easily confirmed by one character, Joey, repeatedly saying, “Hey, yo!” to his friends.) And despite being a Troma production, THE HOUSE ON TOMBSTONE HILL plays things straightforward, which makes the flick come off very weird, as it strives to be a ghost story, a slasher, and a zombie flick all at once. Speaking of ghost stories, THE HOUSE ON TOMBSTONE HILL is happy to homage/rip off an all-time classic in an extended scene where a recently killed college yuppie returns from the dead, possessed by the house’s bad mojo, and begins threatening his girlfriend, demanding to know, “What about my responsibilities?” as she slowly backs away swinging a large 2×4 at him. (Sound familiar?) All during this sequence, you honestly won’t know whether THE HOUSE ON TOMBSTONE HILL is purposely honoring THE SHINING this long, or if it’s simply ripping it off instead. I don’t know and I don’t want to know; ambiguity is all part of its charm.

The characters are your archetypal young adults, and though most of the actors give underwhelming performances, Victor Verhaeghe, who plays Bob the carpenter, is tremendously over the top, very overbearing, and I wouldn’t change a thing about it. Dialogue doesn’t exit his mouth, but slithers out — with the kind of disdain that makes him sound like the most hateful man alive. (“I ALWAYS have a cigarette before I start a job,” he tells another member of the cast wanting to know if he has to smoke. “It’s a RITUAL with me.”) That Bob is a dick from his first minute to his last makes THE HOUSE ON  TOMBSTONE HILL much more entertaining, and seeing him act the asshole to every single person he evidently calls a friend is glorious. (He’s also the one that resurrects the spirit of Abigail by purposely breaking her tombstone, so every bloody thing that happens to him and all his friends is literally his fault.)

THE HOUSE ON TOMBSTONE HILL’s odd retitling on video wasn’t the only attempt by Troma to market the film to a different kind of crowd, packaging the VHS with completely brand new cover art: 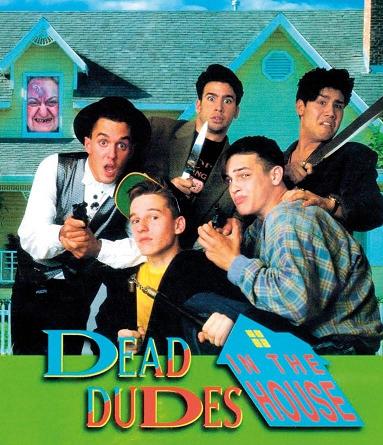 Falling back on a marketing scheme that will never make sense to me, Troma leaned on aesthetical designs calling forth HOME ALONE, HOUSE PARTY, and, evidently, the New Kids on the Block, even though none of the kids depicted on the cover are actors in the film, nor do they come close to representing what the actual characters look like. (I hope you noticed that one of the kids on the new cover is holding a pair of nunchucks.)

Previous synopses for the flick referred to the teens as “heart-throbs” and “hip-hop yups,” along with their “groupie” girlfriends, solidifying that Troma was obsessed with selling these characters as musicians/singers. That wasn’t me putting those words in quotes, but Troma themselves on their own VHS releases, as if they were acknowledging they were fibbing about the movie’s plot. (Example: Troma is a “professional” company that exercises “good judgment” in their business practices.)

Having said all that, I’m totally fine with it. It’s all part of what makes THE HOUSE ON TOMBSTONE HILL so great.

Both flicks have recently enjoyed solid high-def releases, with Shout! Factory tackling SUPERSTITION and the glorious Vinegar Syndrome knocking it out of the park with THE HOUSE ON TOMBSTONE HILL, which includes reverse artwork with the DEAD DUDES/“hip-hop teens” cover that I love so much. To approach either or both titles as mere haunted house films will inevitably lead to disappointment, as “proper” ghost stories work much better with frightening images, suspense, and the establishment of a creepy, ambient environment. However, if you are fully aware of the hybrid you’re getting, I can’t imagine how you could ever be disappointed. Basically, if you’ve marathonned a handful of FRIDAY THE 13th sequels and thought, “this would be better if Jason were a HOUSE,” now’s your chance to live out your weird fantasy, you weirdo. (Just remember to invite me over.)