Home  ⁄  The Wire  ⁄  [GRINDHOUSE COMICS COLUMN] ‘IS THIS HOW YOU SEE ME?’ BY JAIME HERNANDEZ 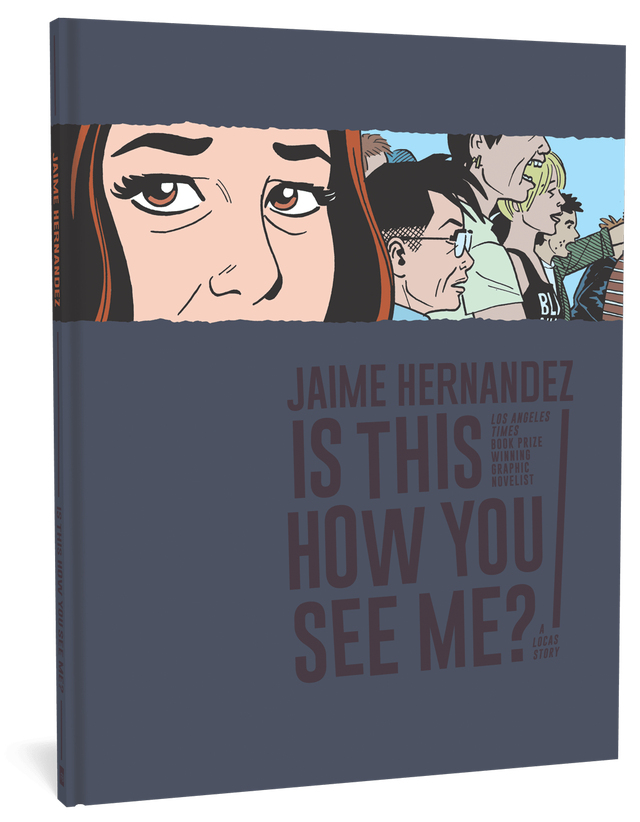 It’s time to just come right out and say it: Love And Rockets is the greatest series in comics history. It’s so consistently good, in fact, that it’s often taken for granted, a part of our lives that we just assume will always be there — because, for many of us, it always has been.

That’s why, even though they don’t present anything new per se, I’m always happy when a stand-alone collection of a complete story comes out. Whichever Hernandez brother we’re talking about, Gilbert or Jaime, they produce work that allows for a completely different reading experience when presented alone, or one in conjunction with the other. I know I go through phases where Beto’s stuff seems to be speaking to me more directly, and (more frequently, I confess) phases where Jaime’s comics have that distinction, but I always enjoy the tonal and thematic contrasts that reading them together in “single issues” (a term that applies more strictly now that the big, annual books have given way for a return to quarterly magazines), and the absolute singularity of vision that the collected editions provide for. All of which is my roundabout way of saying that while I thoroughly dug the serialized story presented in Jaime’s latest, Is this How You See Me?, in shorter installments, it wasn’t until Fantagraphics released it in hardcover a few weeks back that I realized what a seamless thing of beauty it is, and that a strong argument could be made for it as his best work ever.

No exaggeration. No hype. No hyperbole. 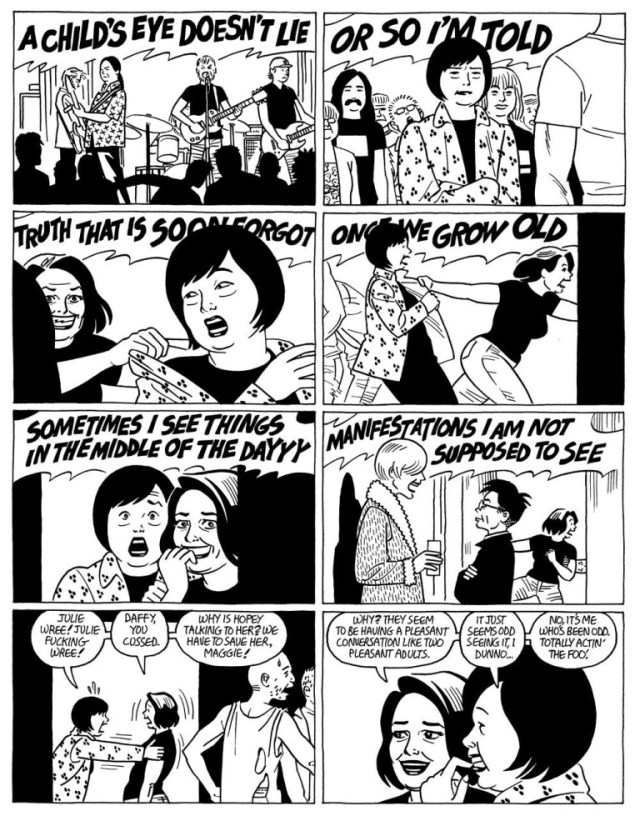 It’s not just the return of familiar faces we hadn’t seen in far too long, or the old-school Maggie and Hopey chemistry fighting to break through and eventually doing so (okay, not exactly fighting — and not it’s also not exactly the “old-school” chemistry, but we’ll get back to this momentarily) — no, this tale of a punk-rock reunion is much more than a simple exercise in nostalgia, even if roughly half of it takes the form of a flashback to 1979. What we have here is something far more remarkable, a quietly majestic and lyrical contrast between the idealism and naivete of youth versus the wisdom and resignation of middle age that draws out the positives and negatives of both stages in life, rose-colored glasses tossed aside for something very close to 20/20 vision.

I guess Jaime didn’t get the memo that folks his age aren’t supposed to have that anymore? 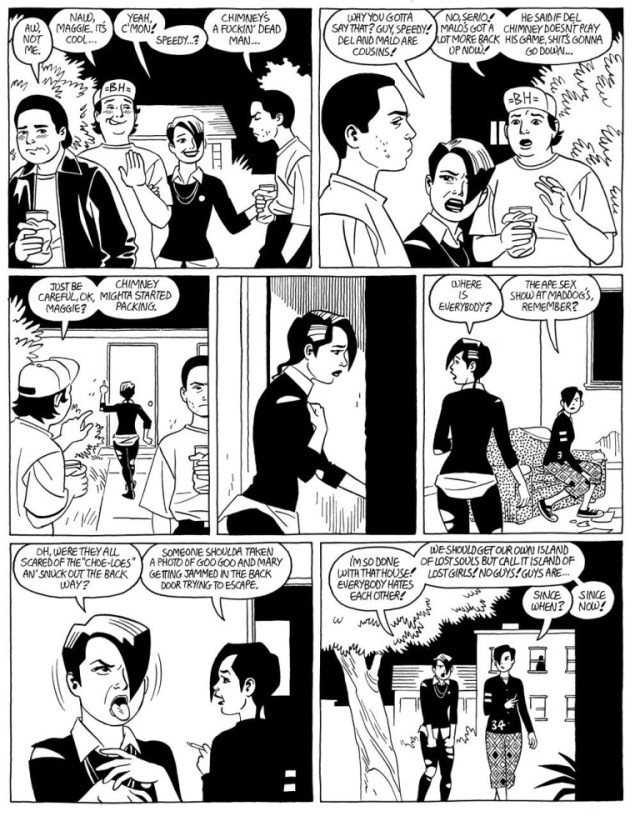 With their significant others temporarily sidelined, it’s only a matter of time before the familiar relationship dynamic Maggie and Hopey enjoy (or otherwise) makes its way to the fore, but watching them both dance around that inevitability is borderline-sublime, as is the fact that when it does  happen, it’s really not a “same as it ever was” situation at all — in fact, in many small but crucial ways, it’s almost entirely changed.

The “retro” storyline teases out the similarities and differences of the Maggie/Hopey “thing” as it exists today, but without belaboring the obvious — which is the trap too many of these “now and then” stories fall into across all media. Obviously, Jaime’s too skilled a storyteller to go that route, but even those of us who have grown up on his stuff are in for a treat as he puts on an absolute clinic here. You could argue that he’s always gone, as the cliche goes, “from strength to strength,” but close observers (as I fancy myself) are, I think, detecting an “upping of his game” that well and truly kicked in with the story that became known as, and collected under the title of, The Love Bunglers, and that welcome trend accelerates here. Did you really think that you’d ever see a better cartoonist than Jaime Hernandez circa 1990? Meet Jaime Hernandez circa 2019. 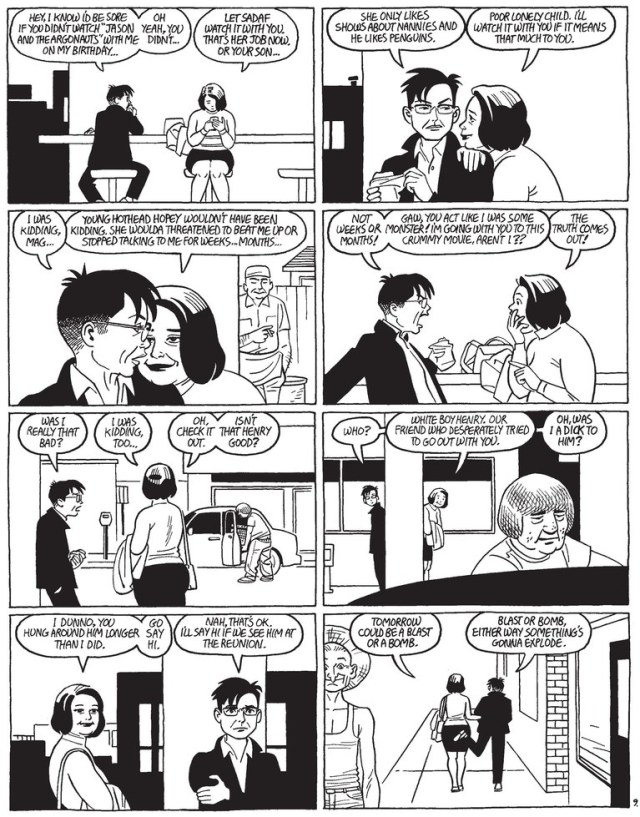 Of course the quality of his illustration has as much to do with that as his gift with the written word, and visually, he maintains the same balance that he does narratively, accentuating the familiar but eschewing cheap and easy wistfulness. Like his protagonists, Jaime has learned, over the years, what he’s good at doing, and has developed those parts of his craft that were strong suits to begin with. Faces and bodies that look authentically human, smartly-populated backgrounds and physical environments, an overall ethos that can trace its roots directly back to any number of classic newspaper strips — when you’ve had 37 years to fill your “toolbox,” chances are your facility with all the implements it contains will be fairly high, and so it is here. Controlled lines, rich portrayal of emotion, negative spaces that say a tremendous amount by dint of the things they omit but the eye knows “should” be there — name me five cartoonists with more sheer skill than this guy. Go on, I dare you.

So yeah, I submit that we are in the mist of yet another Love And Rockets “golden age” at present, and the one and only argument I present for that metaphorical “prosecution” is this book. Is This How You See Me? is everything you’ve always loved about Jaime Hernandez, plus plenty you’ve never seen before, or at least haven’t seen like this. Nearly four decades after they were first introduced, we still have so much to learn about Maggie and Hopey. We’re familiar with them, absolutely, but can you honestly say you ever know exactly where things are headed with them next?

Only one man does, obviously, and he hasn’t let us down yet. In Jaime we trust — and always will.