Being a social media junkie, I see new horror-centric clothing lines popping up all the time. Not to sound like too much of an old fogey, but finding fashion with a horror theme is so much easier nowadays than it was when I was growing up. I love the variety and selection and that is so easy to find. Most recently, a newer brand called TERROR THREADS has been brought to my attention. They do T-shirts, tank tops, zip-up hoodies, baseball tees, and enamel pins with horror front and center. What I really see setting TERROR THREADS apart from other clothing companies is their commitment to the independent horror that is often overlooked by others. 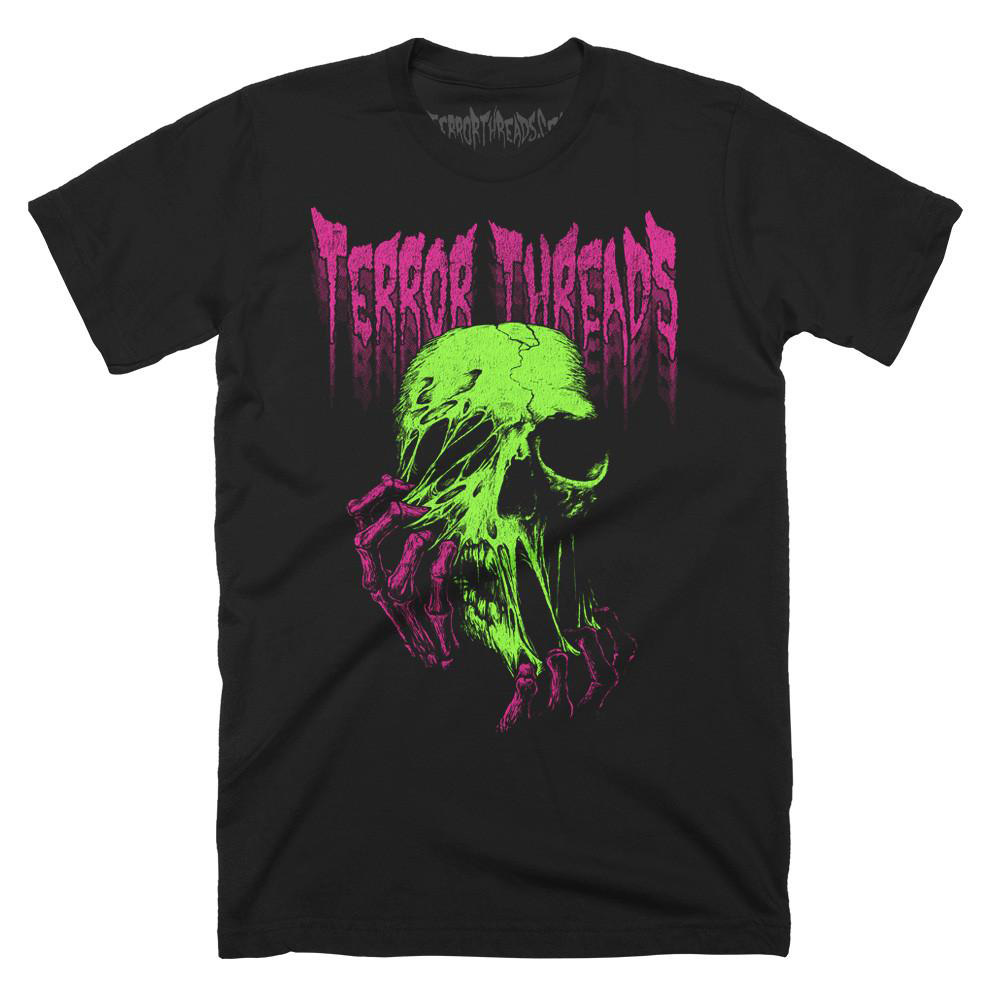 TERROR THREADS was launched almost two years ago, in February of 2016. When Rick Davis, co-founder of TERROR THREADS, was asked how the business was started, he replied, “My wife and I have been running a custom screen printing business in the Northwest Chicago suburbs for over ten years. While business was good, I wasn’t creatively satisfied. We have always had a passion for horror, and I wanted a way to be more involved in the horror community, so I figured why not start a clothing line, based on — you guessed it — horror. I mean, we own our own screen printing business after all, so it’s worth a shot… right? So after doing some research, getting our site built, and getting in touch with a few artists, we launched with our first design on February 1st of 2016, and we have been growing ever since.”

I’ve been so excited to see how TERROR THREADS have grown and how fast they’ve thrived. I was definitely impressed when I first noticed their original artwork on Instagram: Really different designs that horror fans could sink their teeth into. 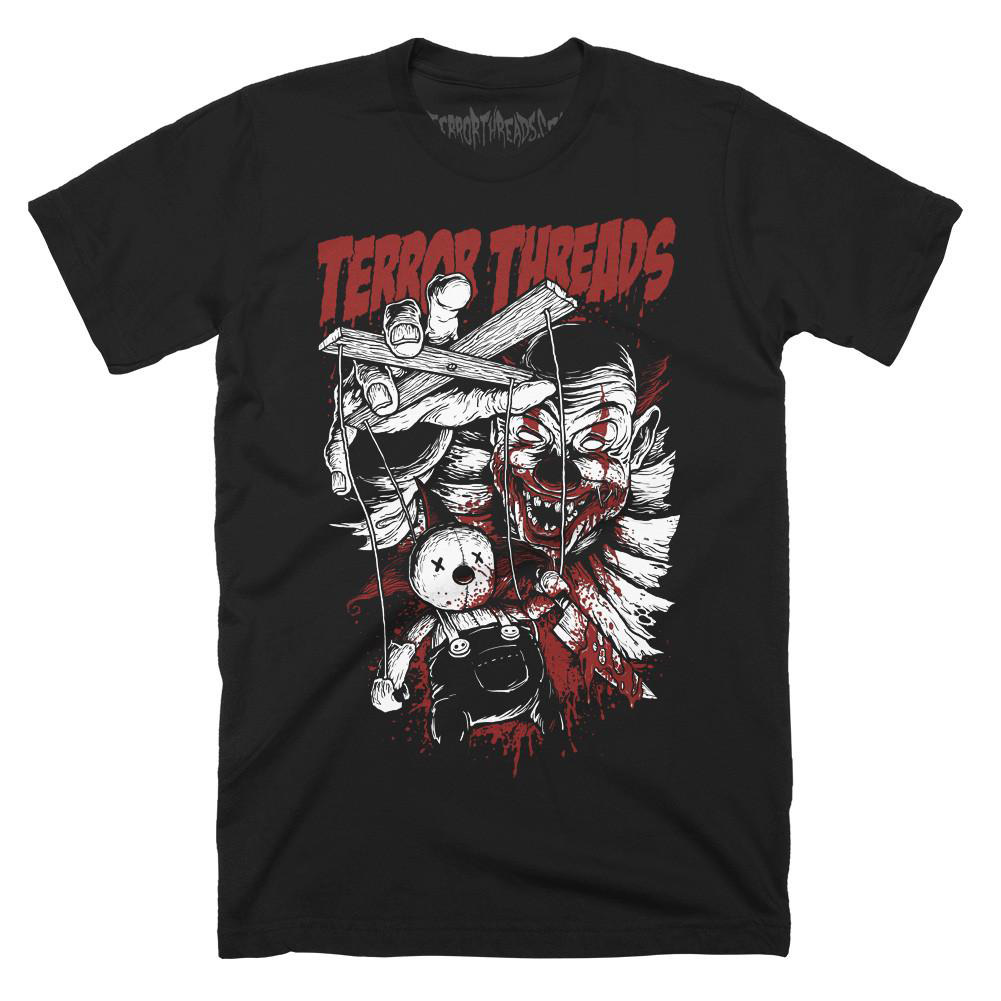 When asked about the early stages of TERROR THREADS, Rick related, “Our first designs were done by artist Toto6. They were TERROR THREADS original designs, so no movie relations at all. We didn’t start adding licenses until almost a year later. Our very first design, “Clowning Around,” is made up of an evil clown working a just-as-evil marionette. Our second design entitled “Face Melt” was created by Toto6 and myself. We wanted a very fluorescent print, so we designed this with that in mind. The design is made up of a neon green skull that has skeleton hands ripping away at its melting skin along with neon purple “TERROR THREADS” text.

Since then, TERROR THREADS have secured the merchandising rights to SLEEPAWAY CAMP, PUPPET MASTER, HALLOWEEN, and TEXAS CHAINSAW MASSACRE. That in itself is quite impressive, but it’s the love for indie films that has me so delighted. Most notably, their collections for  THE HOUSES OCTOBER BUILT, THE HOUSES OCTOBER BUILT 2, and the upcoming  DEATH HOUSE (which is being billed as THE EXPENDABLES of horror, and I can’t wait to see it). 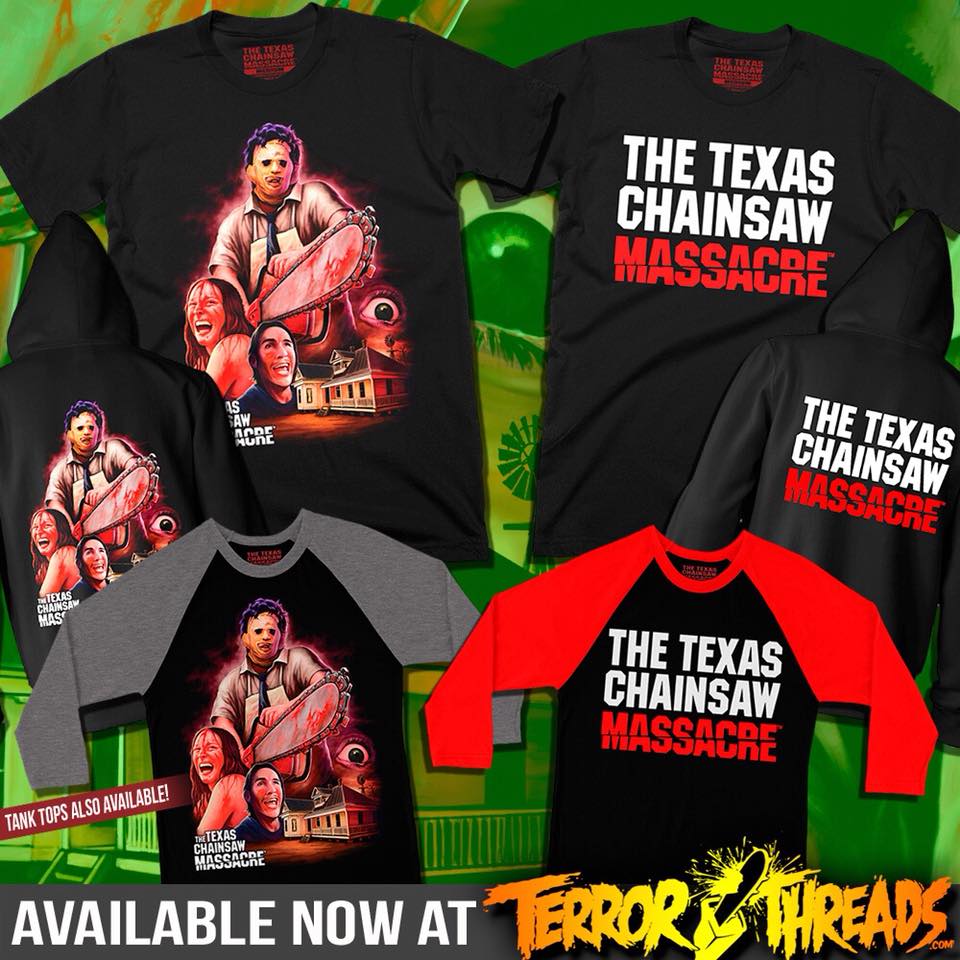 I would have to say that the most unique collection of TERROR THREADS has to be one of their newest. It’s based on the twin sister directing duo, the Soska Sisters! I’ve been a fan of these two for quite some time. Their movie AMERICAN MARY  is one of my favorite modern body horror films. I don’t think I’ve ever seen a clothing company do a collection based on a director before, but I think it’s magnificent that TERROR THREADS is trying something new. 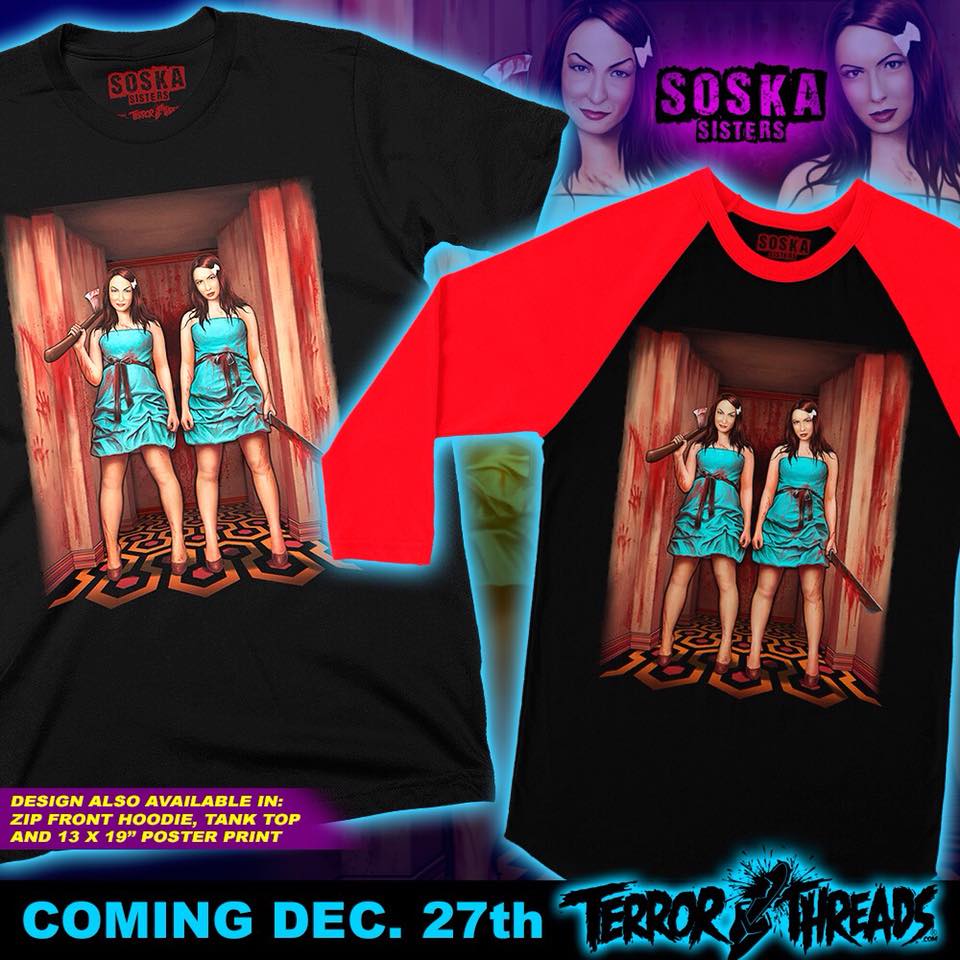 Rick explained how this came about. “Actually when we were introduced to the sisters (who are amazing and give the BEST hugs!) by our favorite Scream Queen, Felissa Rose, we were looking to secure rights for a few of their films. While we did accomplish that Jen and Sylvia also granted us rights to their likenesses, and after speaking with world renowned horror artist Joel Robinson (who also played a big role in making this happen), he had some killer ideas for designs with just the Twins. We teased this on our social media accounts, and the Soskas did as well, and the feedback on this was amazing. We released a set of designs strictly based on the Soska Sisters a little while later, and the response was overwhelming! So much so, we already have new designs being created as I type this.” 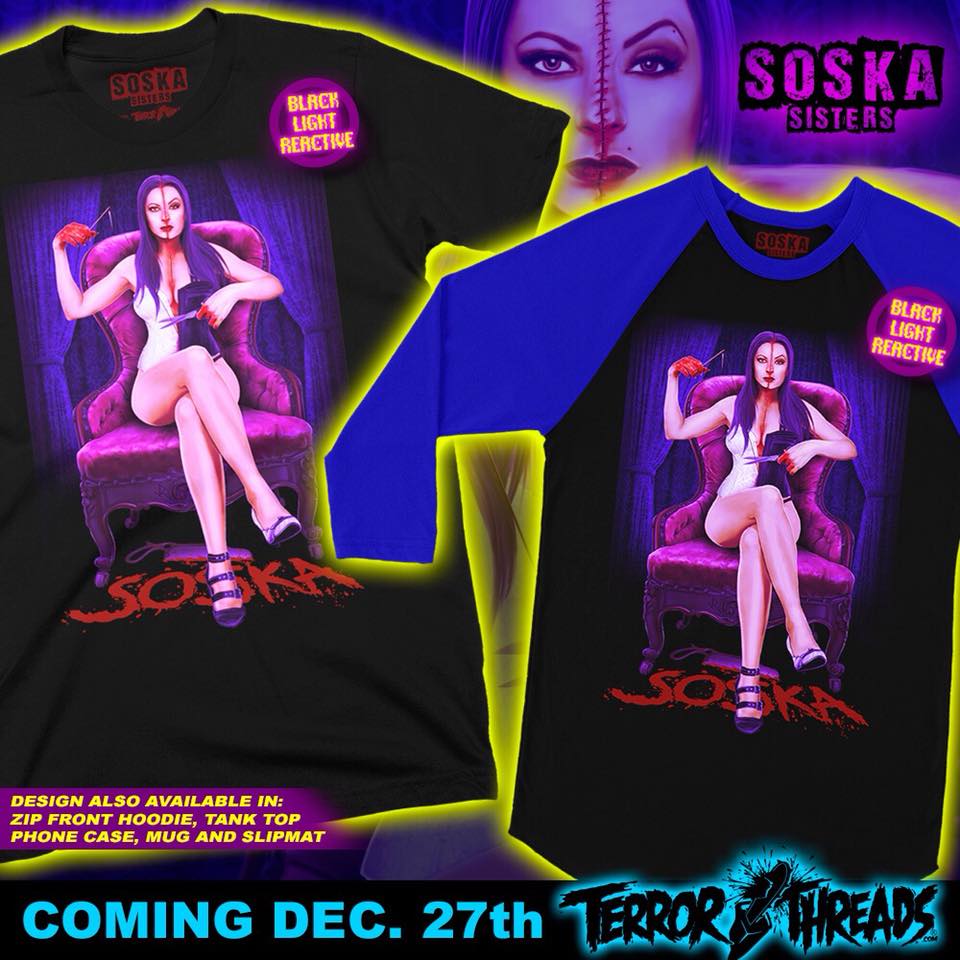 I have to confess, Rick is right. I met the Soska Sisters at Days of the Dead: Chicago, and they couldn’t have been sweeter! You can tell they love their fans, and they do give the best hugs. Looking over the SOSKA SISTERS collection, and every piece of artwork is amazing. They have their likenesses on everything from posters, T-shirts, baseball tees, zip-up hoodies, and tank tops. There are even more obscure items, like iPhone cases, coffee mugs, and even a slipmat for your record player! I love it! I think I need a baseball tee and tank top in every design. 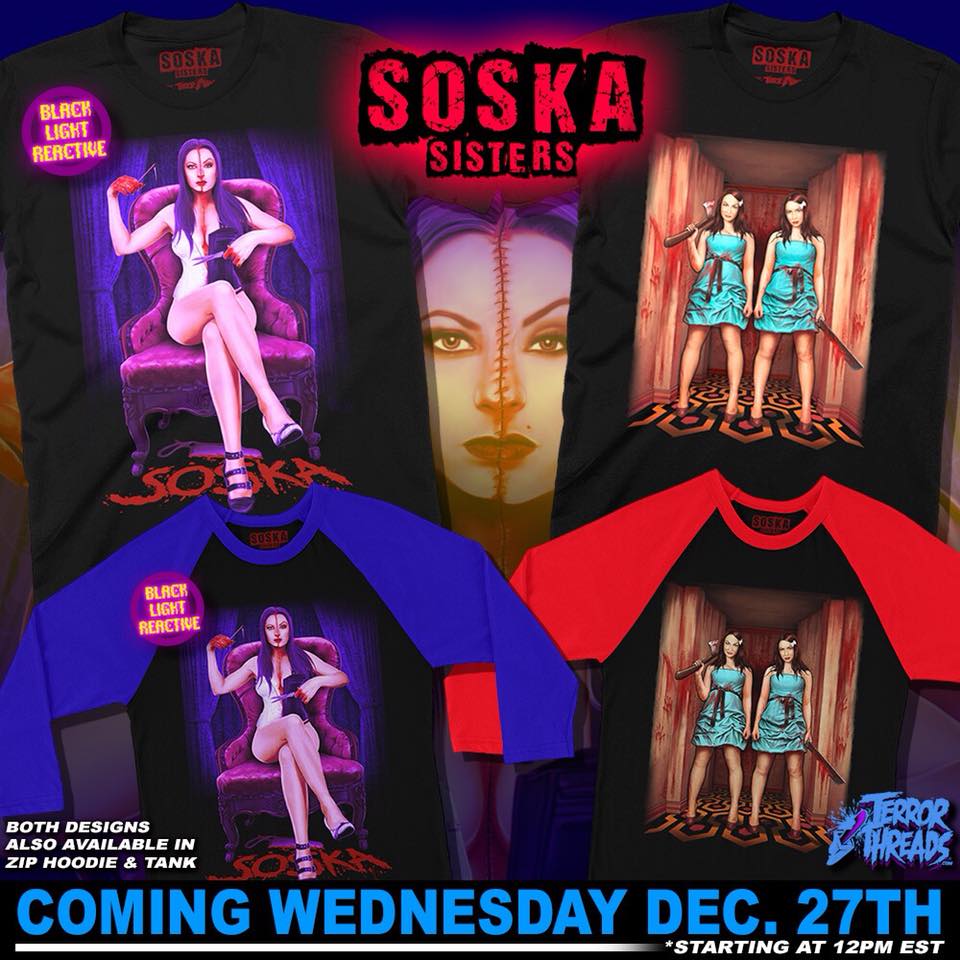 With TERROR THREADS coming out with so much incredible merchandise, I’m excited to see what they come up with next. Rick had this to say about the future of TERROR THREADS: “I have learned that you just never know what’s next with us. All I can say is we are VERY proud of what we have accomplished in less than two years of business, and we don’t see any slow-down anytime soon.” 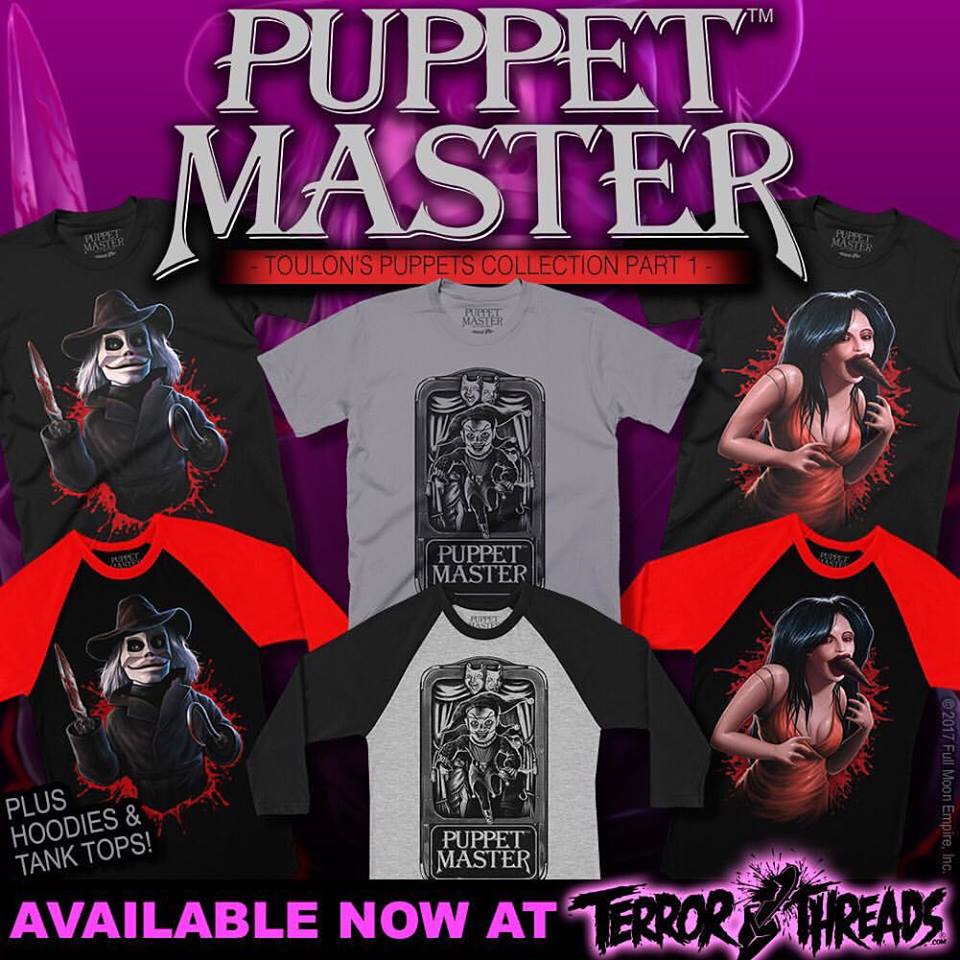 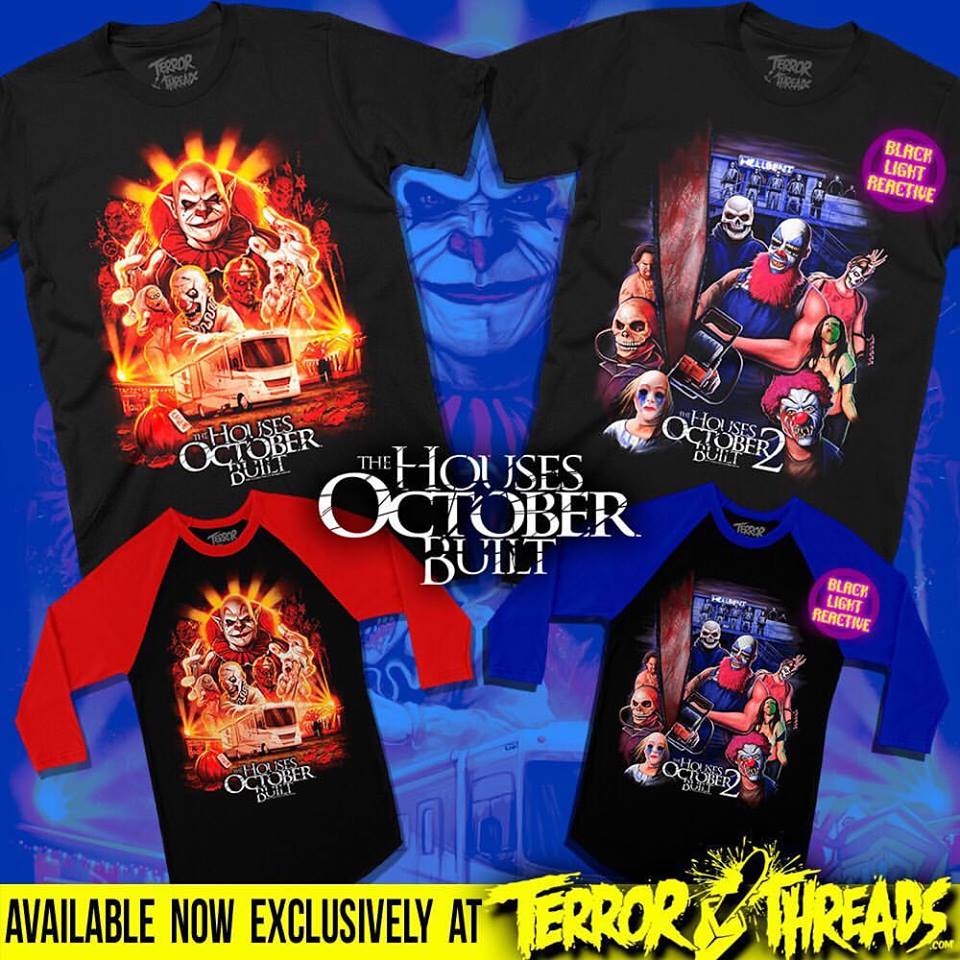 THE JCRT HORROR FOR THE HOLIDAYS COLLECTION