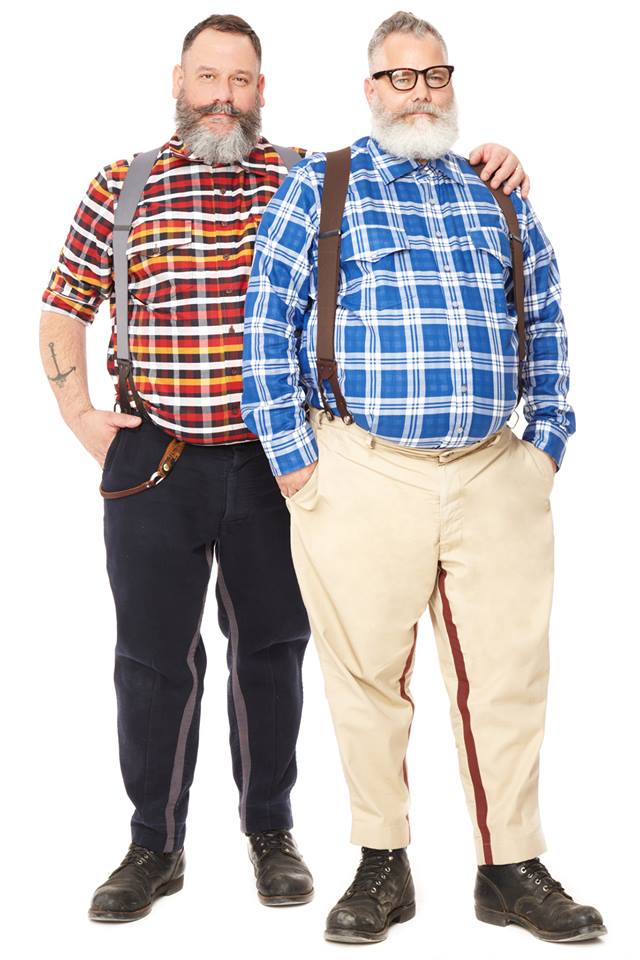 Jeffrey Costello and Robert Tagliapietra are fashion designers who first met in 1994. The two of them have a combined experience of fifty years between them. They presented their first COSTELLO TAGLIAPIETRA collection for the spring 2005 season at New York Fashion Week, and they established a name for themselves in the fashion world for their incredible ready-to-wear clothing for women. Beautiful flowing draped dresses, skirts, and jumpsuits were their signature. The designers had won the hearts of critics, as well as many awards.

They are pioneers in their field, and were nicknamed the “lumberjacks of fashion” in their Vogue debut. In making a name for themselves, they also created a uniform for themselves: Always chic, but never seen without their wardrobe of plaid, suspenders, and full bushy beards.

As their popularity in the fashion world grew for their creations that walked down the runway, so did the desire among male fashionistas to dress like the designers themselves. In June of 2016, they heard the out cry, and started their high end, but yet affordable, men’s line simply called JC#RT. They call themselves “the masters of the plaid-iverse.” Everything from boxer shorts and pajama pants, to neckties and of course their masterfully tailored dress shirts are plaid. To complete the look their plaids are even adorned on market totes, and there are JC#RT matching suspenders! I love it. 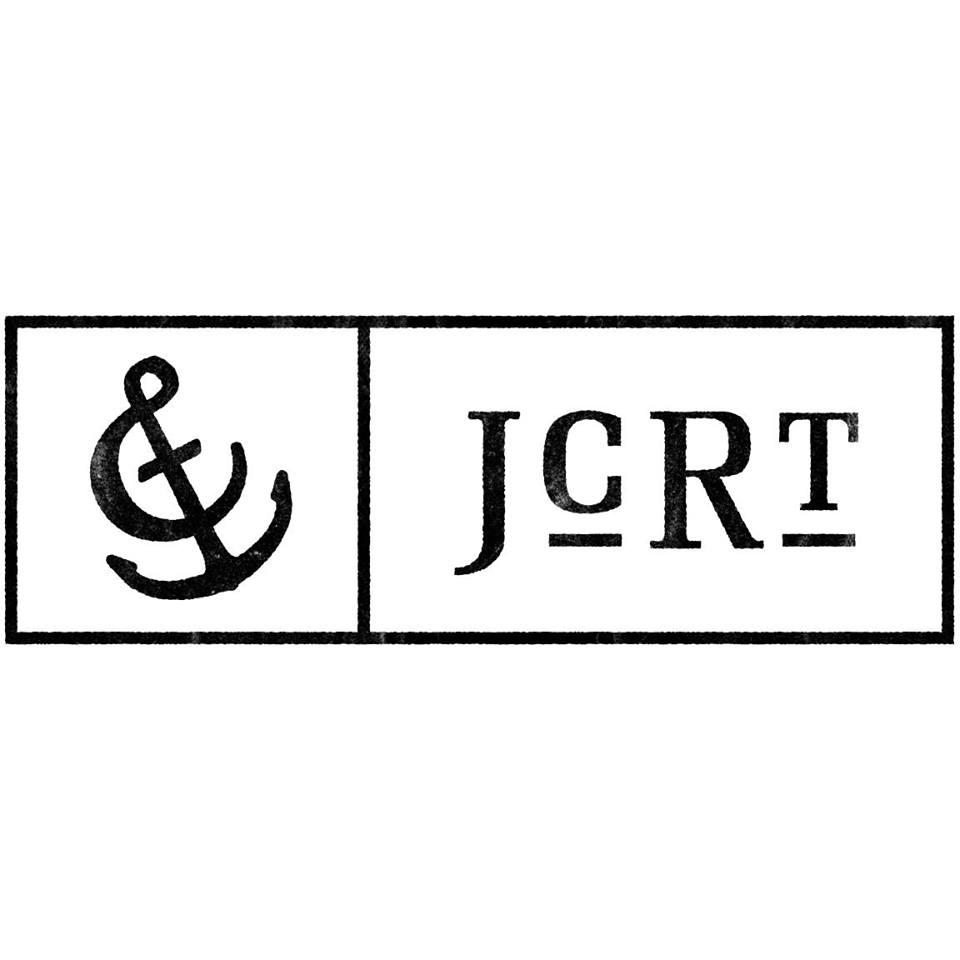 Robert Tagliapietra explained, “We started JCRT after taking a year off — post shutting down our women’s label that we ran for over ten years. Having grown up around tailors we knew that we would return to fashion as this is what we know. Also due to an obsessive love of all things checked and plaided we started with an idea to do plaid shirts.This idea grew and we saw an opportunity to celebrate the core of what plaid is… this ability for a piece of cloth to represent a family, culture or community and explore what that means today.”

In the past, Jeffrey and Robert have drawn inspiration for their color scheme for their JC#RT plaid creations from many different sources. Some of the many JC#RT lines have been based on literary works, album covers, state flags, retro video games, and my person favorite trans pride flag protest shirt where all proceeds were donated to spartapride.org, an organization that helps defend the rights of LGBTQ people who have served in the military.

“Taking things that we love and treating the plaid almost like a painting… pulling colors but also trying our best to express the feelings behind the inspirations. Recently we collaborated with the bookshop One Grand and created five plaids to sell with the books they were inspired by,” relates Tagliapietra. 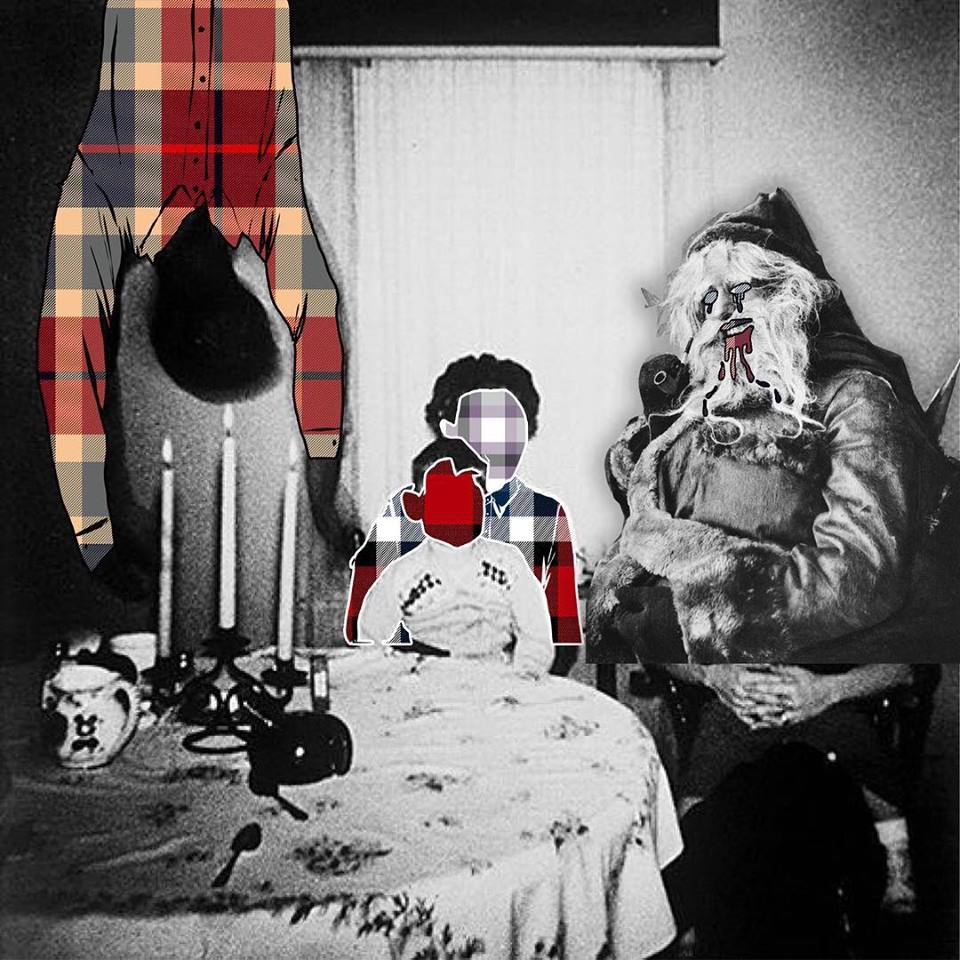 What has me writing about JC#RT for Daily Grindhouse is their newest collection entitled “Horror for the Holidays.” Just in time for the holiday shopping season, Costello and Tagliapietra have created something very special, and it overwhelms me as both a fan of the horror genre and of fashion. This fabulous handmade shirts are based of some of their favorite horror movie posters. 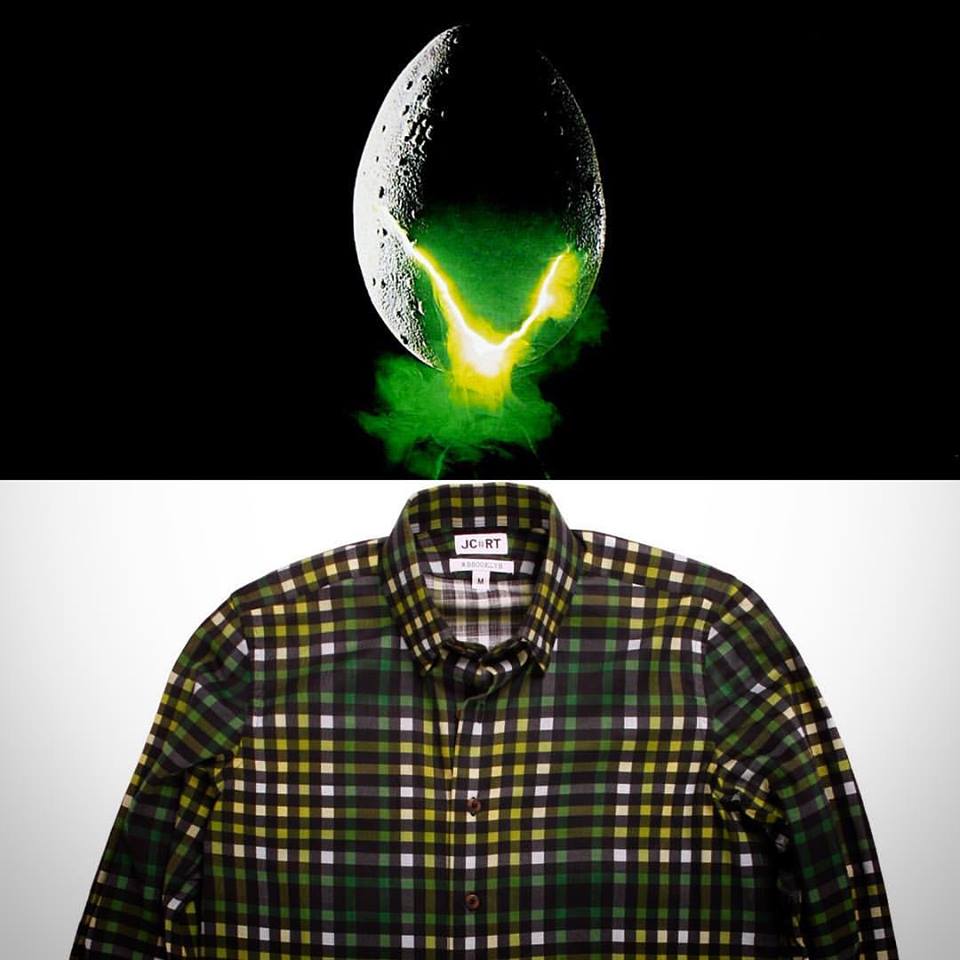 You can see the love and passion that these two have for the genre films that inspired them to create their Horror for the Holidays collection. Each shirt is handmade and tailored and look impeccable! Some of the titles included are: THE LOST BOYS, SUSPIRIA, ALIEN, THE THING, A NIGHTMARE ON ELM STREET, FRIDAY THE 13TH, LOST HIGHWAY, and THE EXORCIST. The NIGHMARE ON ELM STREET flannel is my personal favorite. Maybe because it is one of my favorite horror movies of all time, maybe because it is a beautiful piece of men’s fashion, but probably a little bit of both. 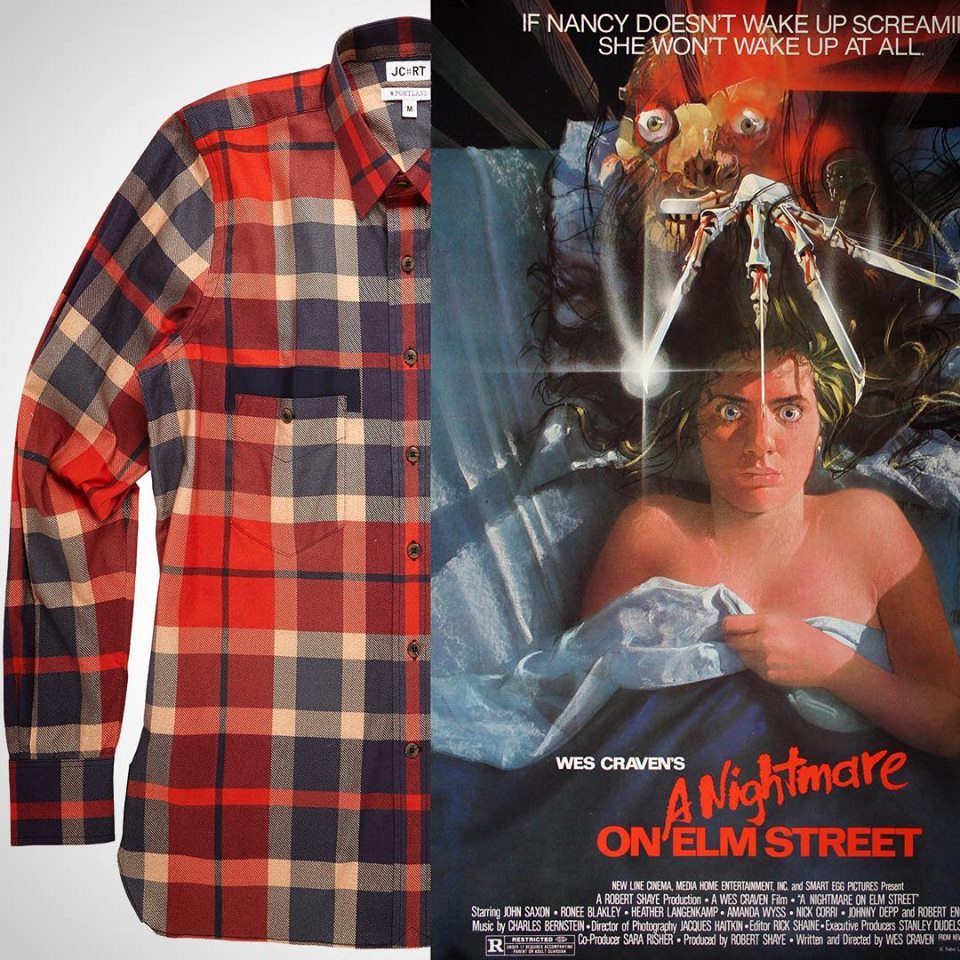 When asked why the horror genre, Tagliapietra responded with, “Horror and science fiction were really all I watched growing up. It was something that we knew we wanted to plaid and thought what better time than the holidays! Plus they all looked so great on flannel — THE EXORCIST, FRIDAY THE 13TH, A NIGHTMARE ON ELM STREET, THE THING, SUSPIRIA… even parts of LOST HIGHWAY, because there is little as terrifying as Robert Blake in that movie!” 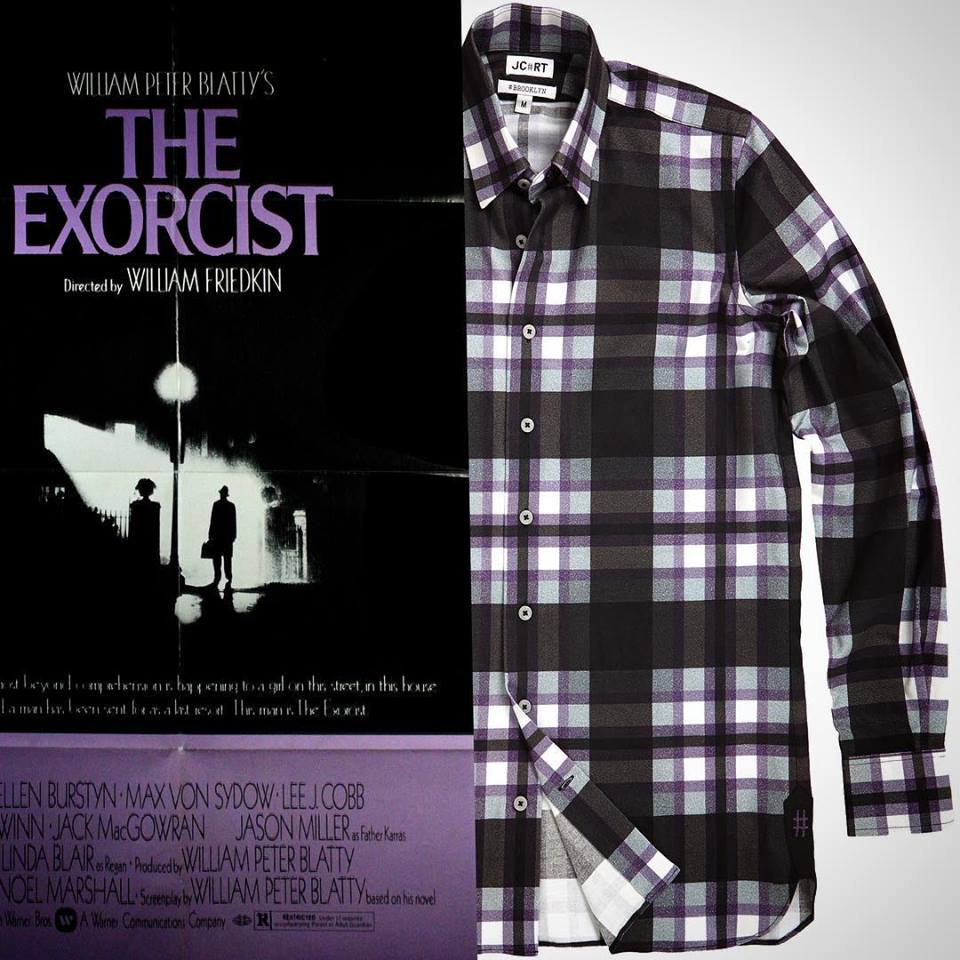 If you are still looking for that perfect gift for that horror loving man in your life who has everything, make sure you order them a classy statement with a horror flair from JC-RT.com! 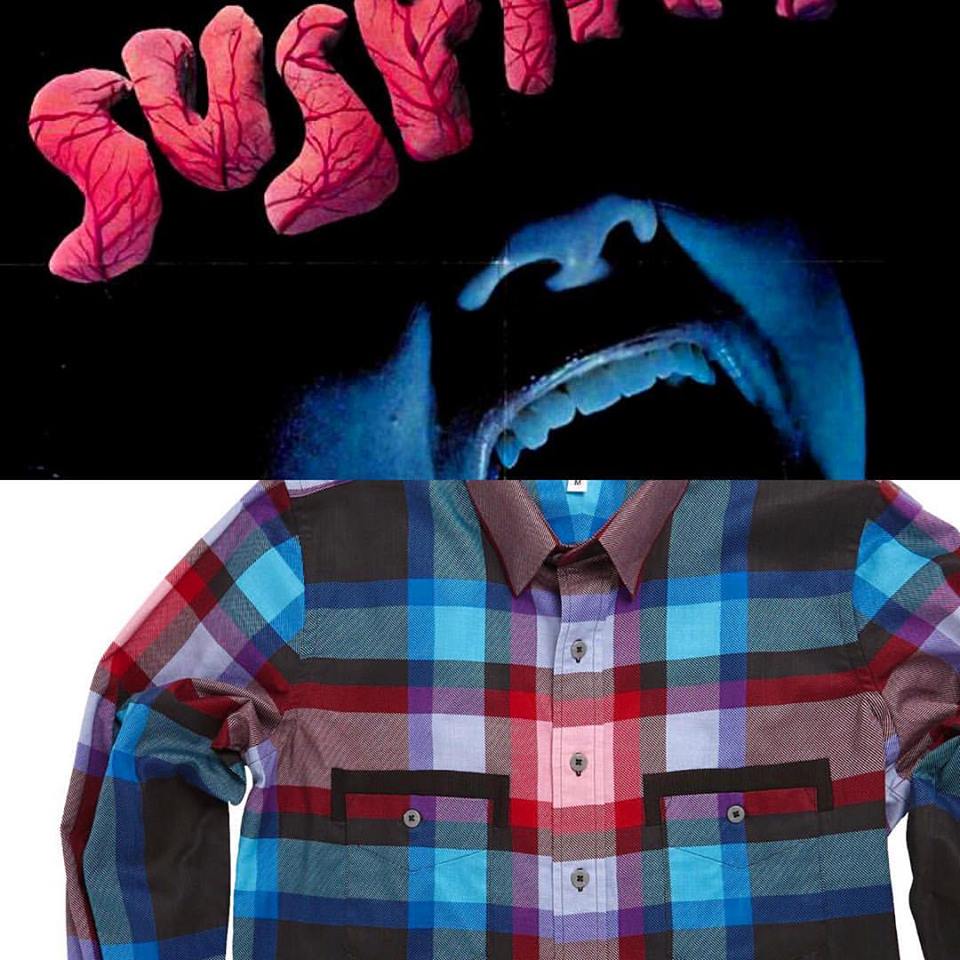 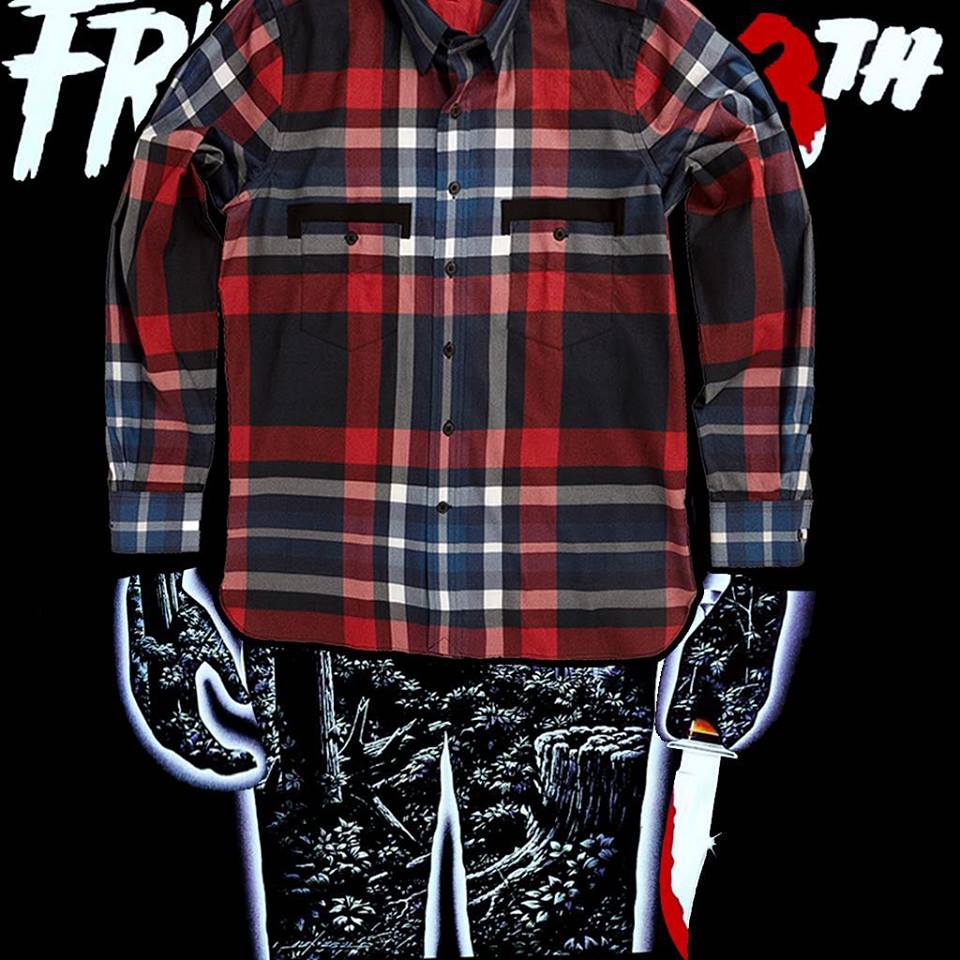 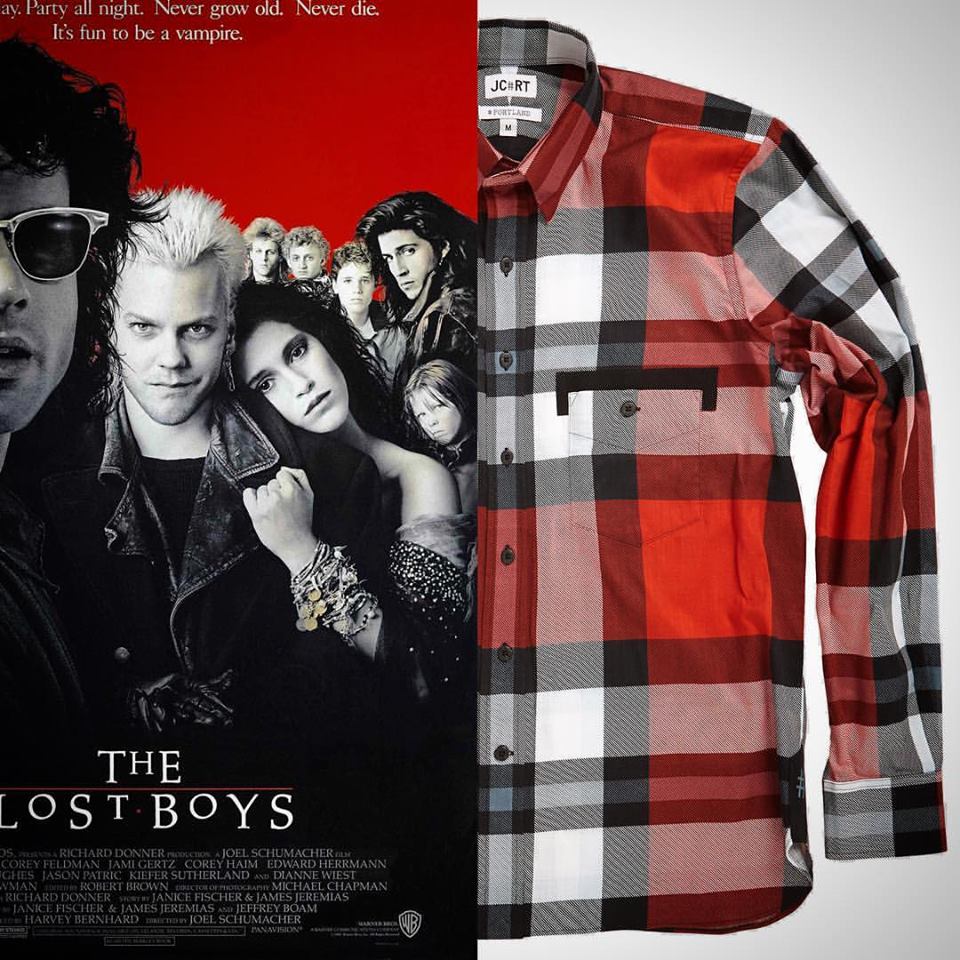