It was the mid-1990s, and Guns N’ Roses were riding high on their USE YOUR ILLUSION double album. They were on top of the world, and their videos were grandiose. You couldn’t miss them — larger-than-life mini-movies combined with concert footage. In 1994 GN’R released a video for their song “ESTRANGED,” and as big and over-the-top as the thing was, the one thing that struck a chord with me was the Charles Manson T-shirt that Axl Rose wore. 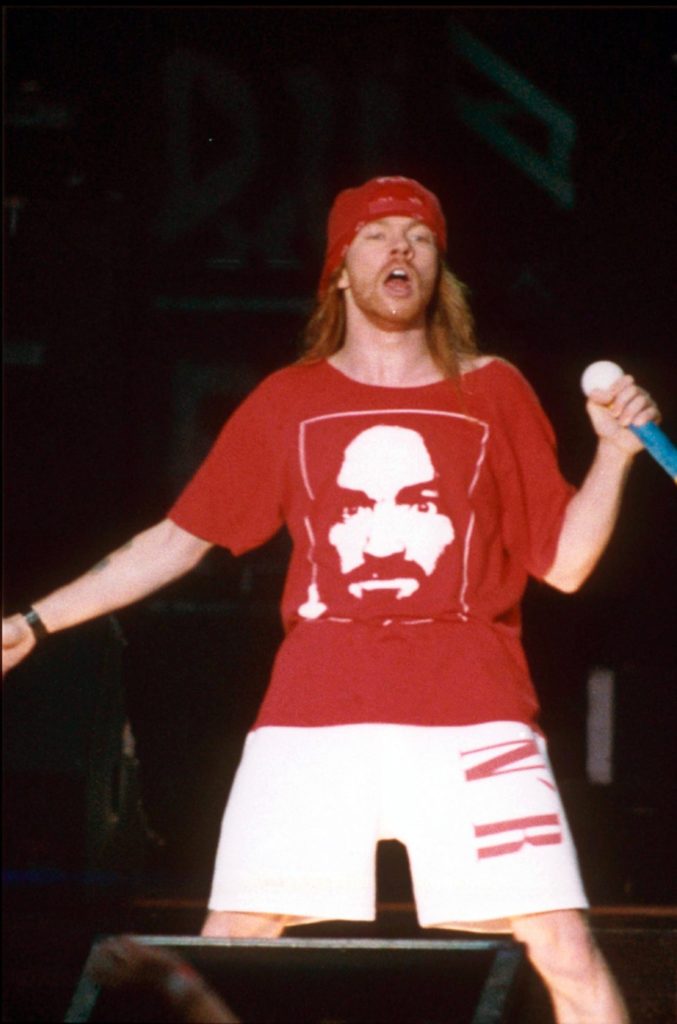 At the tender age of 16, I was fully into punk rock. I loved pushing people’s buttons, and offending ‘normal’ society.  I had never seen someone wear an article of clothing displaying an image of Charles Mason on it. I was enamored with that Guns N’ Roses video for “ESTRANGED.” It wasn’t for the music, or any of the other imagery, but for that one T-shirt. 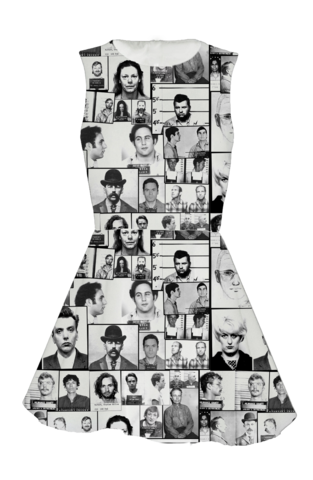 Flash forward to now, and I’m kind of obsessed with true crime imagery being used as part of fashion. There is very little that is shocking in 2018. Whether it’s my “Don’t mess with the Midwest” R-shirt by HORRID TASTE featuring images of John Wayne Gacy, Ed Gein, Jeffery Dahmer, and H.H. Holmes, or my one-of-a-kind seditionaries-style straightjacket shirt with an all-over print of Jeffery Dahmer on it by ADDICTED TO CHAOS, I just can’t get enough of this sick shit.

The one company that is ahead of the curve with true-crime fashion is WESTERN EVIL. They’ve been around for a little over ten years, creating T-shirts that should offend just about everyone. Their classic “Your Mother is Dead” shirt with a picture of Bambi in an S&M leather mask has always been one of my favorites. Another one of their originals that is a big crowdpleaser is their “Your Mom Drinks Period Blood in Hell” design. 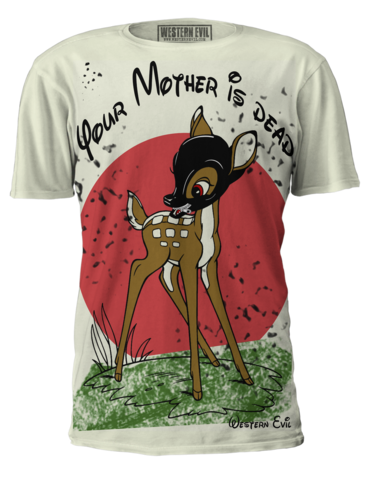 The beginnings of WESTERN EVIL were revealed to me by co-owner Neil Preston Autry, who explains “WESTERN EVIL started really as me being a kid, spray-painting stencils and wheat-pasting my art on walls and tunnels. I had always daydreamed about starting my own clothing company and opening a store. I would talk about it with a couple of my friends, while I was in Police Academy with Indianapolis Metropolitan Police Department. During that time, I stopped doing street art. I eventually left IMPD and worked some crappy security job for the Indianapolis Colts. One day I got laid off, and figured I better start figuring this out, because I wasn’t going to be happy working for anybody else. Eventually one of my friends, who I used to talk about doing this company with, committed suicide. He left a pretty powerful note that really lit a fire under my butt, and helped me re-evaluate what I wanted to do. Long story short, and about a year of eating 99¢ pasta-roni, I started my company and haven’t worked for anybody since.” 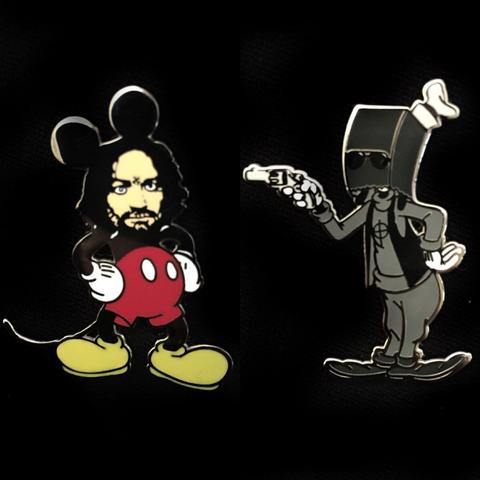 I have always loved how that WESTERN EVIL combines classic punk rock images, pop culture, and true crime imagery into truly head exploding fashion. When asked about where WESTERN EVIL’s inspiration for their creations come from, Autry explained, “My art is usually inspired by whatever it is I’m obsessing about at the time. Some of my obsessions just never change like; true crime, punk rock, horror movies. So a lot of that influences my art. But I think it was inevitable that my obsession with horror movies as a kid would turn into an obsession with true crime. I found my first real introduction to true crime and criminology while in the police academy. Our discussions and classes about criminal behavior was one of my favorite things about being there at all. Not long after I left, I think I became mesmerized by the Zodiac Killer case. The fact that this guy was never found, that he could be anybody or anywhere. He was the real life Boogeyman of the late ’60s and ’70s. I also grew up down the street from Jim Jones’ first church in Indianapolis. This was a man who did a lot of good for civil rights in Indiana, but turned out to be a religious monster who was responsible for the death of over 900 people.”

“Then look at somebody like Ed Gein, for instance. If Ed Gein hadn’t had done what he did and received the attention he did from doing it, would we have the horror icons we do today? Hannibal Lecter, Leatherface, and Norman Bates, all of these movie monsters are based on Ed Gein, a real-life monster. So I just kinda fell into that rabbit hole. It was just stuff that interested me, that captured my morbid curiosity and it transcended into the subject of my art. Also, Nicolas Cage. Nicolas Cage inspires the fuck out of me.” 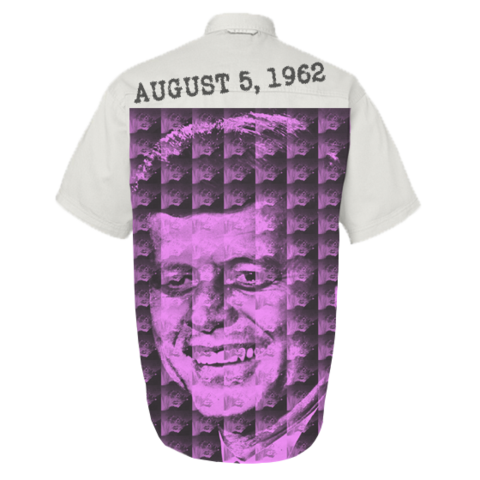 Lately, I’ve been seeing more and more smaller fashion designers on web-based stores like Etsy trying their hand at creating fashion with a true crime twist to it. I asked Autry what he thought about the rise in true crime as part of fashion. “Is true crime clothing popular? I don’t know, I still feel it has this underground niche to it. I mean it’s been incorporated into punk rock for a while. But its kinda an underground market still. I do feel the interest in true crime has grown. It’s on TV with the ID Channel, and in movies with MY FRIEND DAHMER, and this new Ted Bundy flick with that High School Musical kid. So the market is growing for sure. But it takes a special kinda kid to toss on a shirt with Jim Jones and walk out the door with a smile.” 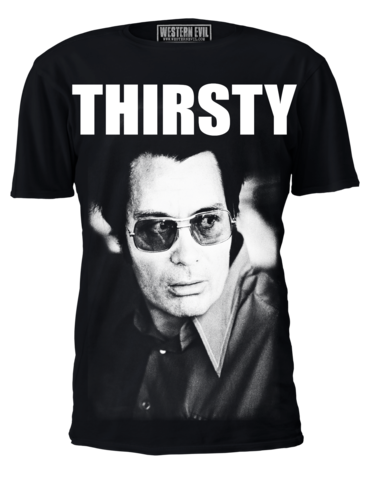 What has me so excited is that WESTERN EVIL is doing more than just T-shirts now. Their new line “ROCK N ROLL IS NOT A TRUE CRIME” is pushing the boundaries much further. WESTERN EVIL is combining retro punk rock seditionary style button-ups, women’s dresses, leggings, and enamel pins with true crime imagery. I wanted to know what made Autry want to use true crime images as part of his clothing, and he replied, “I’ve always used true crime or morbid historical events in WESTERN EVIL designs. From the deaths of Buddy Holly and Elvis, down to the Black Dahlia. I think there is a beauty to these morbid events. Life is precious, and death is a scary thing — maybe I’m subconsciously trying to normalize death, because I myself am afraid of it. So sticking it on a shirt kinda dilutes the fear of it a bit. I think a little part of it plays to my love of the ’60s biker counter culture attitude. Another part of it is that I couldn’t find anything for myself that was cool like that. I would go to a convention and find a thick uncomfortable cotton shirt, that had 1”of plastisol on the front that felt like a brick. I would drop $20 on a ugly print with Charles Manson’s head on it, that would fall apart when I washed it once. There was no style or humor to them. So I kinda just made stuff that I myself wanted to wear, and thankfully there are other people out there that dig what I like too.” 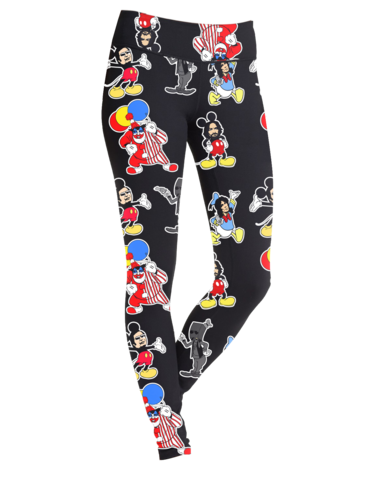 These new button-up men’s shirts are to die for. I already have one with an all-over print of serial killers mugshots, but I really need all of them in the collection. They are really so smart and subversive. Combining sick humor with fashion is genius. As much as I am in love with WESTERN EVIL, I can’t imagine it would be everyone’s cup of tea. Out of curiosity, I needed to know if they had ever received any complaints or worse, threats. Autry told me, “I have never received any threats, but I have received a lot of complaints. That’s never bothered me too much, though. I’m not everybody’s cup of tea, or flavor of Kool-Aid. Most of the time it makes me laugh, because I will get comments like “I love ‘My Favorite Murder Podcast’ or whatever show on ID Channel, but this is tasteless — hope you’re giving the money to the victims!” or “How can you glorify these people?” Which is strange to me, because I don’t see these people flooding Netflix, or ID Channel, asking where the millions from advertising money is going. I don’t see people asking FOX if the money from COPS is going to the victims. They will say “Don’t drink the Kool-Aid,” not realizing it’s a reference to the murder/suicide of 900 people. It’s strange how people can cherry-pick what upsets them like that. I don’t see how using mugshots, of people who have been caught and punished for their crimes, is glorifying them. I’m not putting superhero capes on them. Although, one time I did make a shirt that had Michael Jackson as the Virgin Mary that said, “Hopefully there are children in hell,” so whatever, maybe I’m an asshole. 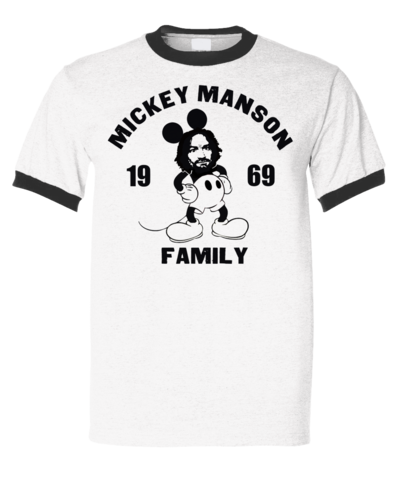 With all the excitement going on with WESTERN EVIL, I needed to know what was in store for WESTERN EVIL. When asked about the future of his clothing company, Autry replied, “Hopefully the future will provide for me what the last few years have. We really tried this last year to bring something new to our fans. With the Jim Jones Flavor-Aid purse, the men’s dress shirt, and women’s leggings. So this year, we will be doubling down on that same idea. We have a few tricks up our sleeve that you will have to keep an eye out for in the next couple of months.” 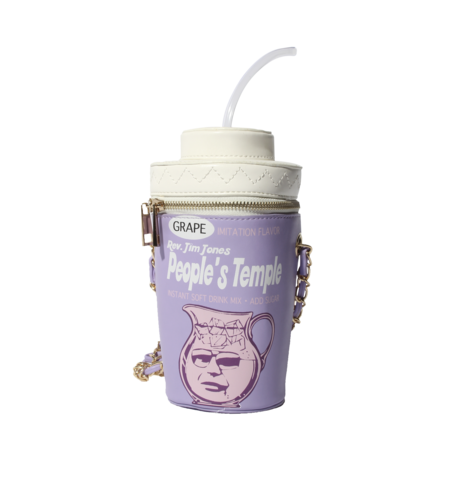 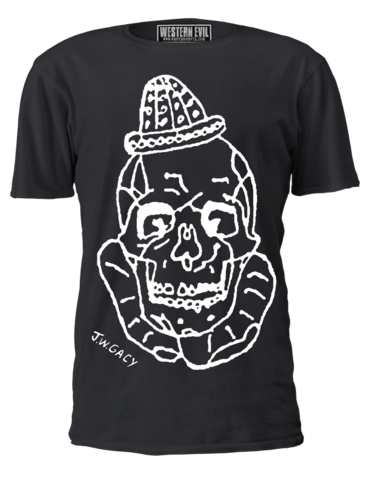 I usually only see WESTERN EVIL booths at horror conventions and music festivals, but make sure to check out their website at westernevil.com and get on their mailing list! It’s all about having fun, looking good, and pissing people off. 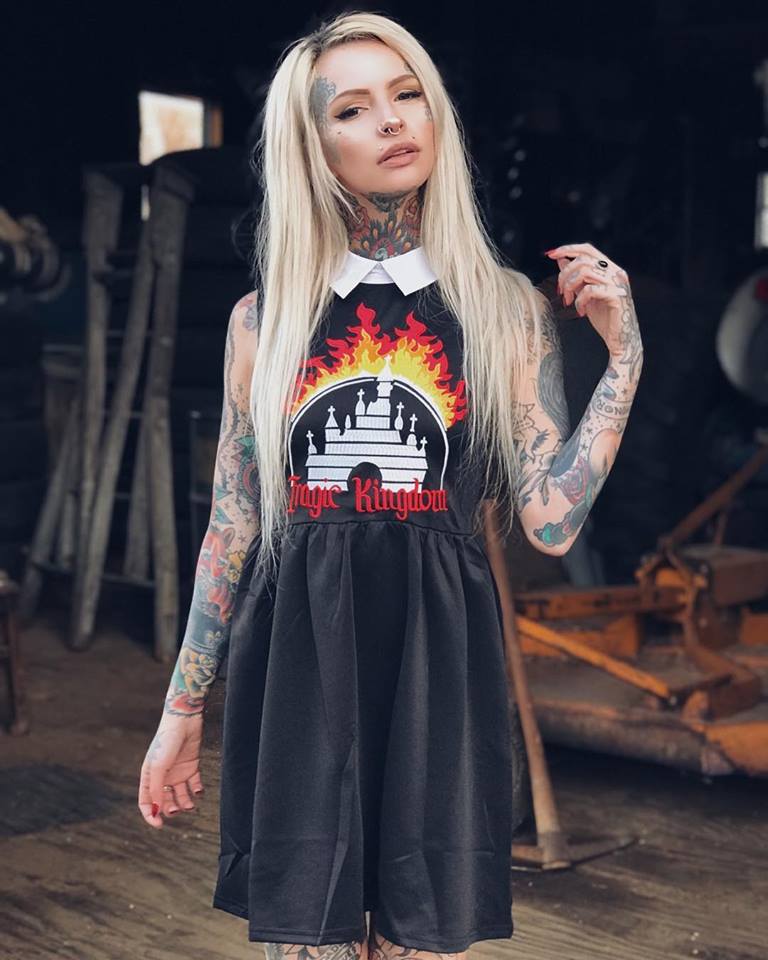 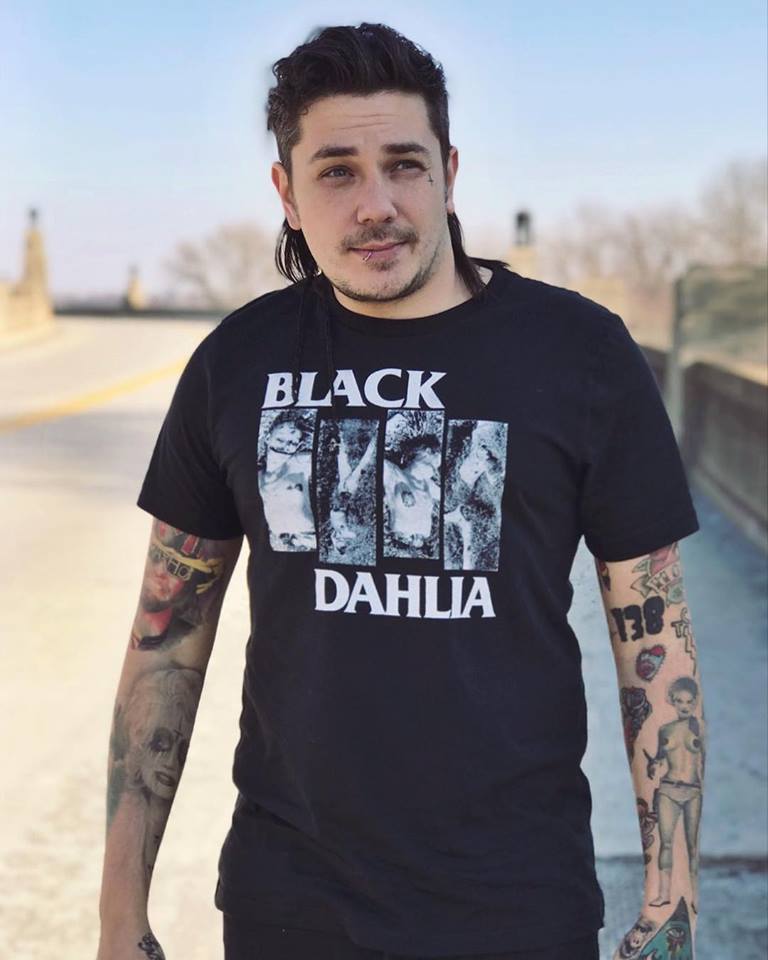