Vinegar Syndrome have proven themselves repeatedly to be one of the most interesting DVD/Blu-ray imprints and film preservation companies working in exploitation and genre cinema, releasing top-notch transfers of films that had previously only existed on home video in shoddy transfers (or in some cases, not at all). That film preservation aspect of their business is unquestionably a noble cause, and in theory every film deserves a chance at resurrection regardless of its entertainment or artistic value. In reality, though, not every “lost” film is going to be a great one, although it may have particular historical significance. The latest Peekarama release, a double feature of two films from 1974 (DEEP TANGO and THE YOUNG SECRETARIES), is the first in the series where historical significance is the principal reason to watch either of these films.

About 70 minutes into DEEP TANGO, one of the characters says “I’m sick of this crap, and I have no idea what’s going on!” Chances are good that any audience member who makes it this far into the film may have very similar feelings. Mostly notable for being the second screen credit for porn superstar Annette Haven, DEEP TANGO is a pretentious, surreal hippie comedy. The action of the film follows parallel stories tied together by the characters of John (Keith Henderson) and Pauline (Mona Watson), who meet while looking at an empty apartment. They quickly become lovers and decide to meet at the apartment without talking about their lives. When they’re not at the apartment, John is dealing with his cinema verite-obsessed girlfriend Tomine (Annette Haven) and her ever-present film crew. Pauline works for a sex therapist, engaging with patients to aid in their therapy; her current assignment is a young woman named Rosebud who fantasizes she has killed herself and won’t get out of the bathtub where she supposedly cut her wrists with a tin can lid. 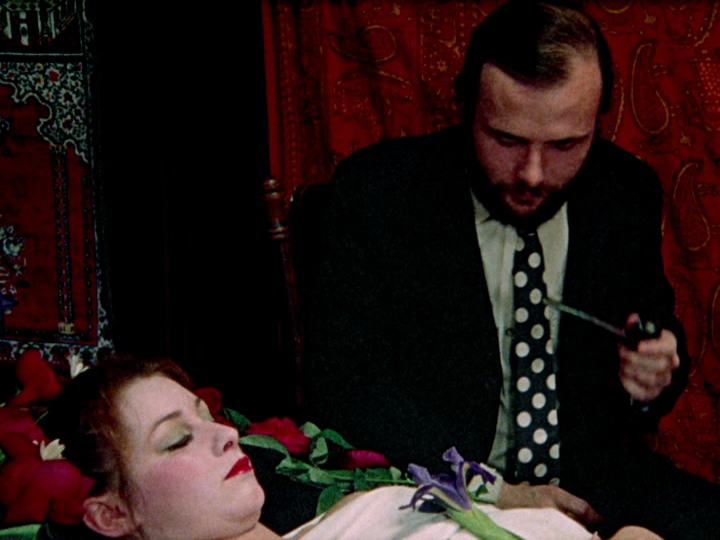 Before each segment with Pauline and Rosebud, the therapist Pauline works for records notes on Rosebud’s progress while having sex with a nurse. Occasionally a barely-visible title card will appear over a minute or so of footage of a dance marathon. Most of the story lines just sort of fizzle out, leaving the film to end on a nonsensical downer. Leading up to that, though, there’s plenty of hippie art weirdness on display: Sex scenes are intercut with footage of the Daly City BART train, Rosebud’s funeral turns into a threesome with her boyfriend and her mother, Pauline uses some butter to lube up John’s ass before shoving a huge baguette up it, demanding he shout “McDonald’s Hamburger!” There’s a lot more, but none of it makes much sense and the overall effect of all this plus a truly atrocious soundtrack (attributed to “Nimrod”) is more a feeling of humoring a bunch of art students than anything approaching fun.

But at least DEEP TANGO is weird. THE YOUNG SECRETARIES was apparently also released in 1974, but everything about it screams 1960s. In fact, the film is very reminiscent of Herschell Gordon Lewis’s THE ECSTACIES OF WOMEN (1969), one of “The Lost Films of Herschell Gordon Lewis” that made up Vinegar Syndrome’s very first release. Everything from the sound to the color schemes, transparent nighties and awkward, patently fake sex scenes would indicate that the film was made well before 1970, but a scene where characters drive past a theater playing DEEP THROAT suggests at least the exteriors were shot in 1972 or later. Director Richard Kanter had previously made THAT SHE BLOWS! in 1968 and STARLET! in 1969 with producer David F. Friedman, Lewis’s former partner in crime. It follows that Kanter may have been influenced in his approach to filmmaking by Friedman; in any case, THE YOUNG SECRETARIES certainly has a very distinct late-60s low-budget look, and it’s painfully dull. 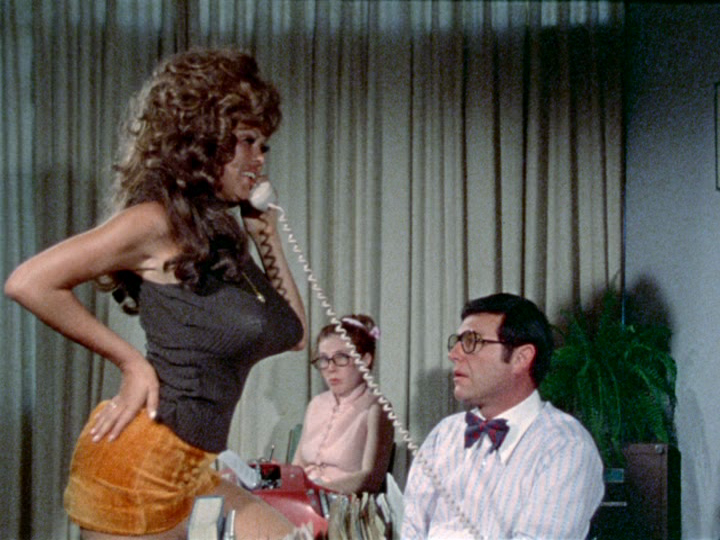 The film concerns Cameron (John Barnum), head of an advertising company bankrolled by his father-in-law. His wife Caroline (Colleen Brennan) is planning to dump him for young Marshall Adams (Gary Schneider), so Cameron tries to plot with his right-hand girl Sally (Jan Mitchel) a way to prevent the takeover of the advertising agency if not his marriage. Meanwhile, the people who work for Cameron get high and have sex in the supply room, or wait until the office party and do it there. Most everyone looks pretty bored, and the wood paneling that makes up the background of most of the film is more interesting than just about anything happening in front of it. By the end of the film, it’s hard to care about what’s going on with the implied corporate intrigue, and a relief when the abrupt end rolls around.

Vinegar Syndrome scanned both films in 2K from a camera internegative, but in another first for the Peekarama line, the disc opens with a warning that the color of the materials they had to work with for these films was severely degraded. It’s immediately obvious that neither film is as clean as other Peekarama releases, but as noted, these two films were basically “lost” before this release. There is some weird color in DEEP TANGO, especially in darker scenes, while THE YOUNG SECRETARIES looks a little better despite some dirt and scratches. Both films are entirely watchable from a technical standpoint, but again, other than the fun of watching “lost” films, their relative replay value for the average viewer may be low. DEEP TANGO is more likely to be the selling point here, both because it has actual hardcore sex and because it’s easily one of the weirdest films in the Peekarama line so far. Still, it’s great that Vinegar Syndrome are saving these films, even if they’re not always quite as good as one would hope.