A while back, I put together a list of 12 of the most ridiculous forgotten sports flicks, featuring such memorable attempts at cinematic diversion as the Tim Matheson bowling classic DREAMER and the snooker musical BILLY THE KID AND THE GREEN BLAIZE VAMPIRE. I somehow missed ICE PAWN, an inspiring story set in the shady world of figure skating betting, and for that I apologize, because the world beyond the mere 33 folks who have voted on the film on IMDb needs to know about ICE PAWN, and I do hope to rectify that. Maybe we can get that number up to 35. 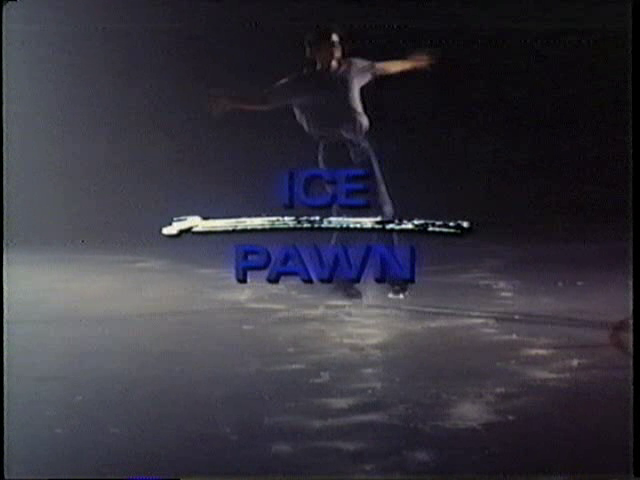 To set the scene for ICE PAWN, it’s good to note that the existence of the film didn’t happen in a vacuum. The 1988 winter Olympic Games, held in Calgary, were a huge event, and even not being much of an Olympic fan myself, I can still remember Milwaukeean Bonnie Blair winning a gold medal in 500m speed skating. (This may be because I was living in Milwaukee at the time.) Figure Skating was certainly big as well – it was the year of Brian Boitano, whose name would be recognizable today even if it weren’t for the song from SOUTH PARK: BIGGER, LONGER AND UNCUT.

So the mere notion of ICE PAWN, no doubt shot in ’88 and released the following year, isn’t exactly an enigma, though it did kind of miss the chance the cash in on Olympic fever. They may have done better to wait until the next round of Games, like the classic figure skating romantic comedy THE CUTTING EDGE did. 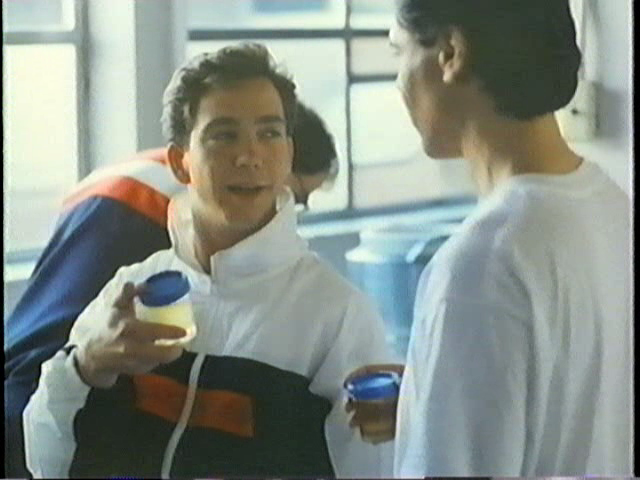 Though it probably wouldn’t have mattered, because ICE PAWN would be a misguided, dumb little movie. Paul Cross wrote the film and stars as Alex Dalton, an aspiring figure skater who toils as an airplane mechanic for his father, a gruff fellow played by Dan Haggerty, who legally had to appear in 17 movies each month at the time as part of a community service plea. Daddy Dan wants him to stay and learn the trade, pointing out that he’s getting old (while his age is never stated, Cross is clearly in his mid-30s at the youngest) and that he hasn’t broken through yet, but Alex just wants to dance! No, wait, skate! Skate and dance! It’s a passion he tries to sell his pop on through the following inspirational monologue:

“I don’t wanna be an airplane mechanic all my life. All these things do is fly. I’ve got something I’ve gotta do, and if I don’t do it now, I’m never gonna do it!   I wanna make people feel something, just for a few minutes, I wanna bring them into my world and get them to feel what I feel — the music, and this love that I have for something I can share with other people! Alright, so maybe my dream of a wife and a family I’ll never get, but I do know I have this feeling, Dad, and I can’t stop it even if I tried!” 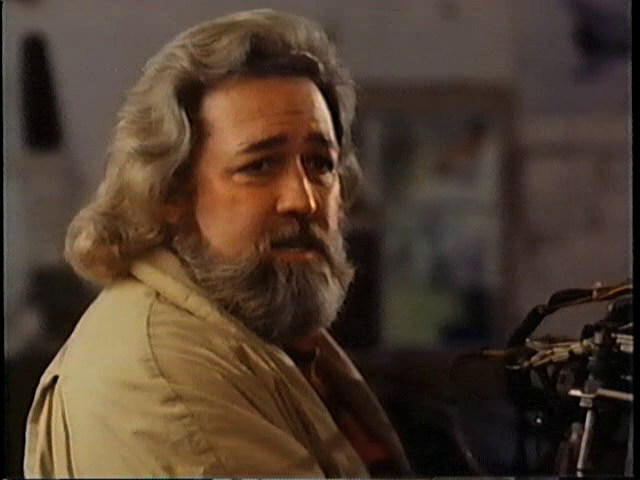 Yeah, take that, you stupid planes! All you do is fly! I got a feeling and stuff!

Neither Alex’s age nor general insufferability are enough to stop his dreams, even after a previous year’s attempt at doing a quadruple axle nearly cost him “his career and his life,” we’re told. When similar efforts at the World Figure Skating Competition featuring a huge crowd that never appears in the same shot as our characters lead to similar results, everything seems lost, especially after a hilarious interview with sketchy reporter Katherine Sterling (Jayne Samson) that consists, in its entirety, the following exchange:

Sterling: “Any idea what happened out there?” 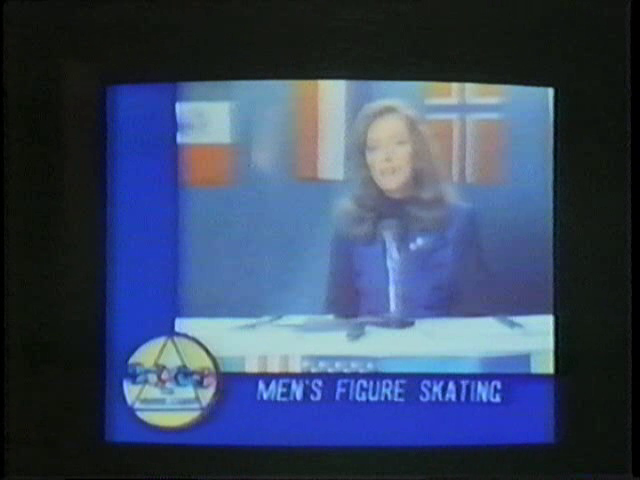 Alex is told that it’s a “young man’s game” and he should quit while he’s ahead. To add insult to injury, his competition is in the form of the preening, flamboyant Soviet skater Misha Orlov, played by Gary Kemp – though not the Spandau Ballet member and star of THE KRAYS.  “These guys hate each other,” a reporter helpfully informs us, though we could probably have determined it from the constantly-pursed lips and venomous eyes Kemp constantly sports, scarfing up scenery like the bitchiest queen of the ice that ever was. 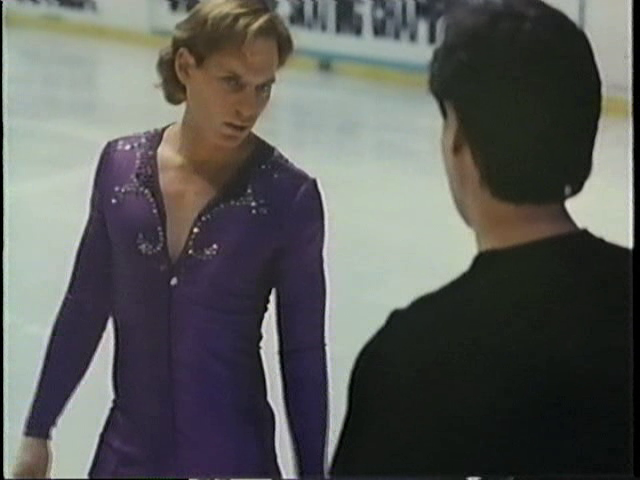 Alex is so forlorn that he stoops to selling the boombox he uses to listen to terribly bland background music, and when he gets an offer from the shady agent-type Ray Everette (ROBOT JOX’s Ajax, David Cameron) he only takes it after his current trainer Tom (the Patrick Duffian Robert Budaska) has a huge fight with him on the ice in which everyone around them stops skating so quickly you’re shocked they didn’t dub in a record scratch. Tom only wants what’s best for Alex, and soon Alex is signed to a contract that guarantees Everette “50% of everything he makes as a pro for the next 5 years.” Sheesh!

The deal seems good, with Alex getting a car and a Visa card that he uses to buy a new set of clothes and skates that… make him look pretty much the same, but at least the Visa logo gets plenty of screen time. He hangs out with fellow skater Mark (Patrick Brault), who would be satisfied with joining the Ice Capades and is the least-convincing “ladies’ man” I’ve seen in a while – if you’re going to have to sell people on loving “titties out to here,” you may want to work on your lisp. Alex trains with choreographer Chris (Kelee Sweeney) and their relationship quickly becomes Cinemax fodder in a weird soft-lit sequence in which she pours water all over herself and they begin making out. (It cuts out before anything happens on screen – this is a movie where people are “scared spitless,” after all.) 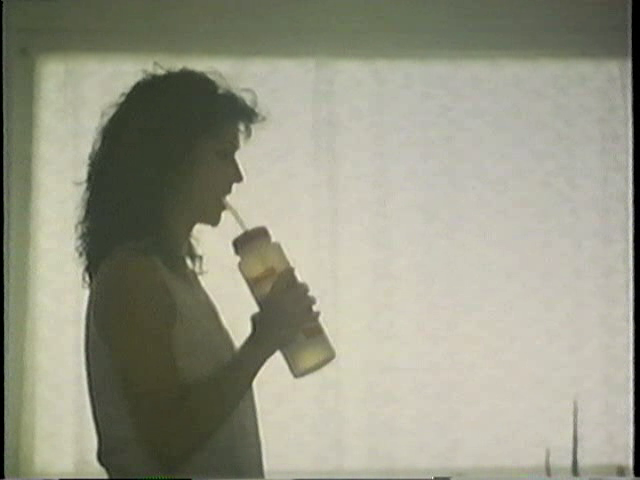 All things climax at the Olympics themselves, of course, when Orlov taunts Alex with “They are the marks of someone bought and paid for, like a whore!” Alex catches on to the whole thing and hatches a plot involving failing a drug test, resulting in the first slow-motion climactic moment of someone downing tryptophan in film history. Will the corrupt judge get his comeuppance? Will his father ever truly understand him? Will he be able to skate on his terms and win the Gold? 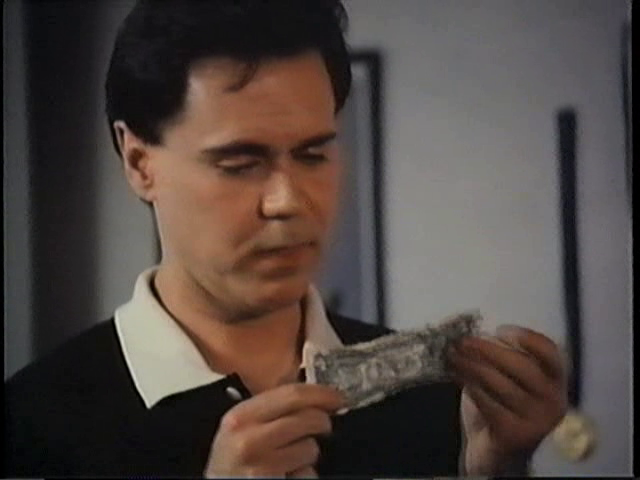 The biggest problem with ICE PAWN is that I have no idea who the hell the film is intended for. If it’s for figure skating fans, there’s not a whole lot of actual figure skating in it, and the filmmakers even missed the chance to pull a GYMKATA by casting an actual figure skater in the lead, resulting in a valiant effort to hide the fact that Cross isn’t actually doing the bulk of the tricky skating, and relegating shots of Cross on the ice to simply drifting back and forth with a determined look. If it’s for neophytes, it’s got no real dramatic pull, throwing in sub-plots out of a sense of obligation (Love interest! Alienated father!) rather than to accentuate any character. If it’s for thriller fans, it’s a total bust – the only time a gun is used is as a warning and the hoodlums attacking the coach are apologetic about his accident!

The film does manage to be mildly interesting when it is, in fact, about the skating, especially during the early Olympic trials that measure how well the skaters retrace circles on the ice, accompanied by news-like narration that explains the process as though it was a documentary. It’s one of the few moments in the film that feels as though it genuinely knew what it was supposed to be about – informing the viewer as to how all this judging works. 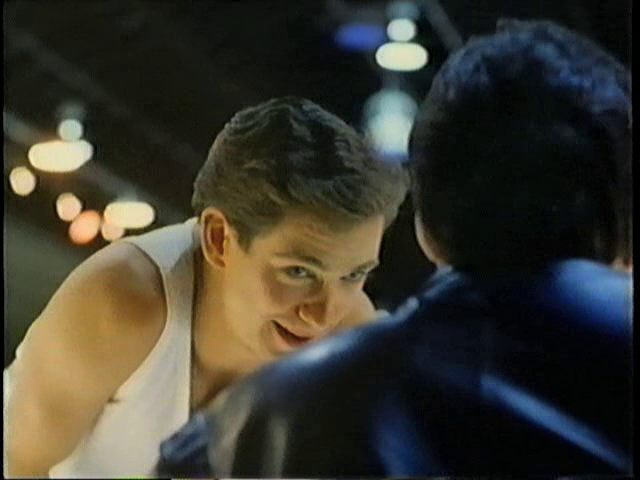 The acting wavers all over the place, though Kemp’s Orlov and Samson’s recurring bizarre reporter are certainly entertaining, even if they often seem to belong in a different movie. Budaska serves as a fine coach, to the point where you wish there was more to this relationship and less to some of the others. In the lead, however, Cross is, at best, a bland presence whom you’re never really actively rooting for or against.

ICE PAWN is never strong in attempting much, so it’s tough to say the film doesn’t work for what it is – it’s just that it’s not much of anything at all. You can overcome a potentially silly premise by either taking the initiative to develop the characters well and make it convincing (see CUTTING EDGE) or by going head first into the wind and wallowing in the ridiculousness of it all (see BLADES OF STEEL), but ICE PAWN does neither and just ends up standing there boredly on the ice, waiting for the music to start.