The announcement that Vinegar Syndrome would be releasing films from the vaults of Troma Entertainment was certainly a welcome one for genre fans.  While Troma’s exploitation archives are deep, they’ve never been very good at bringing their library out in a decent form, often saddling their releases with sub-par transfers in improper aspect ratios.  Vinegar Syndrome has proven to be a great force in bringing vintage sleaze to modern formats in the best available way, allowing viewers to finally be able to see the films in a form close to the way they were meant to be originally viewed, so the pairing (which also promises an upcoming release of the Mary Woronov/Lynn Lowry flick SUGAR COOKIES) is an inspired one.

The first title out of the deal is LUST FOR FREEDOM, a women-in-prison pic that served as the directorial debut of Eric Louzil, previously a producer on the Troma-distributed SHADOWS RUN BLACK and SIZZLE BEACH U.S.A. and future director of parts 2 and 3 of Troma’s NUKE ‘EM HIGH franchise.  It’s a strange, mixed bag of a movie that never quite manages the heights of WIP classics, but it’s still an enjoyable ride, and one made all the better with Vinegar’s fine presentation. 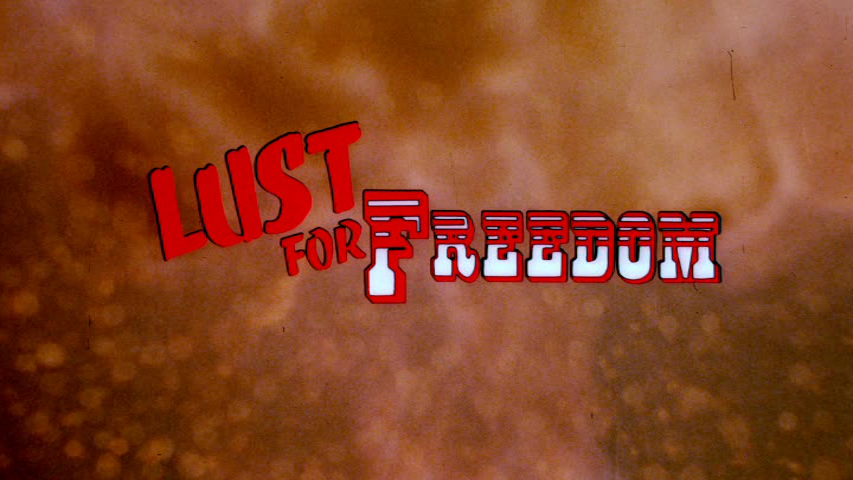 In her only film, Melanie Coll stars as Gillian Kaites, a spectacularly useless cop who’s somehow managed to become an established undercover officer.  During a fairly routine operation on a weapons dealer (named “Jonathan Troma”), her partner/fiancée is killed and she wanders off dejected, unable to help her colleagues.  She then takes a long road trip in order to get her thoughts together, walking off the force without telling anyone where she’s going.

After stopping to look at a lake for a while, she ends up running into a young woman in an evening dress who claims to be running away from a work farm.  When the local sheriff (William Kuzler) gets involved, Kaites finds herself arrested and placed into the local woman’s prison for drug possession.  Kaites’ narration suggests that she was in shock and just “couldn’t get my brain to work,” but the fact that she barely resists the capture at all and doesn’t even bother pointing out that she’s a cop suggests that maybe “shock” may not be the only contributing factor to her brain not working. 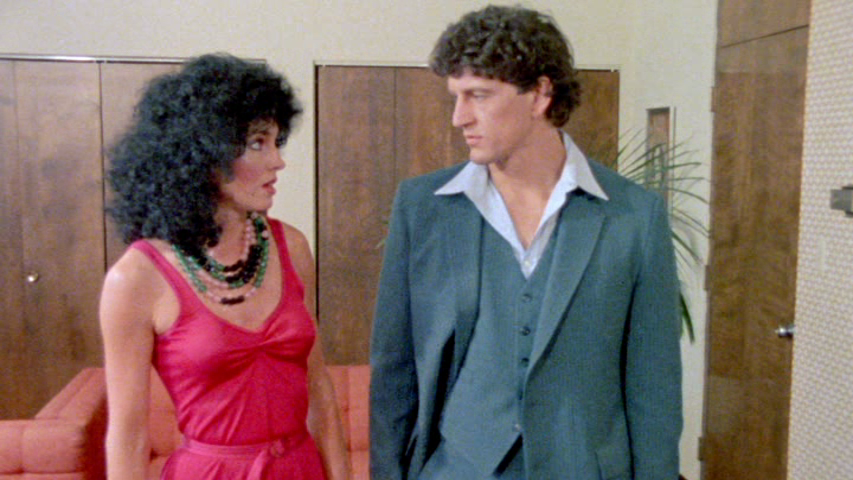 The rest of the film takes place inside the walls of the small town prison, filled with a bevy of beautiful ladies who have been imprisoned for reasons both true and false.  As Kaites puts it, she’s “caged with the same petty trash and scum that I’d put away,” though the fact that she’s in prison for false charges doesn’t seem to suggest to her that the others there might be as well.  Empathy doesn’t kick in until the arrival of Sharon, a young woman who just wants to get back to her parents.

All of the women’s prison clichés are here, from the butch female warden (played to the hilt by Judi Trevor) to the rapist guards to a sadistic male warden (Howard Knight) who even supervises a porn/snuff ring.  We also get a whipping, a wrestling match (featuring GLOW’s Matilda the Hun, Dee Booher), a silent Native American henchman (John Tallman) and the token lesbian love scene, the latter featuring Michelle Bauer. 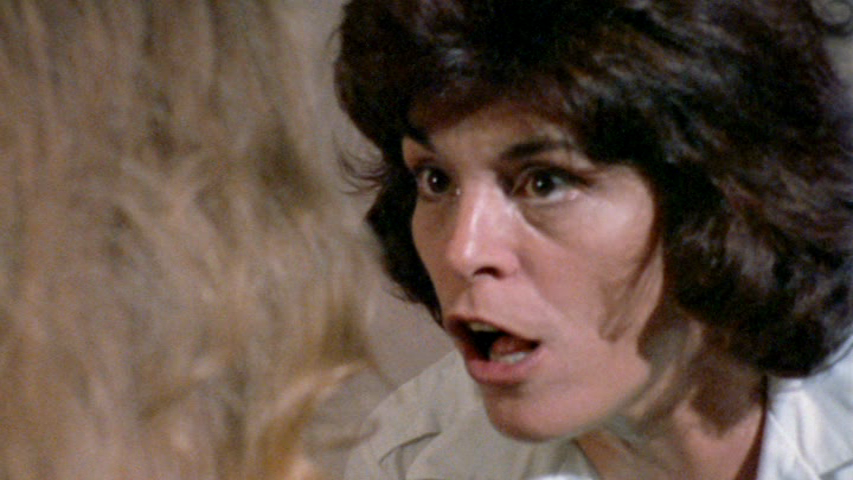 Now, all of this sounds pretty lurid, and it is, for the most part, presented without the knowing playfulness that makes CAGED HEAT or REFORM SCHOOL GIRLS more enjoyable than mean-spirited, but much of LUST FOR FREEDOM is so incidentally ridiculous that it never comes off as cruel.  Kaites is such a dim bulb that she’s hard to root for and the songs by metal band Grim Reaper are repeated so frequently that they become a running gag, so you just end up enjoying the committed performances of the supporting cast – and they’re certainly game enough to put on a hell of an entertaining show.

With Coll’s vacuous narration, it sometimes feels like an extension of the “Pethouse Video” segment from AMAZON WOMEN ON THE MOON restructured as an action film.  By the time she gathers her LUST FOR FREEDOM enough to start a riot and break everyone out (because apparently she didn’t really like freedom before – if only she’d had a LUST FOR COMMON SENSE, the film could have been over in fifteen minutes!) , you’re more than ready for the goofy ending, and you have a full understanding as to why this made the rounds on USA’s “Up All Night” for years. 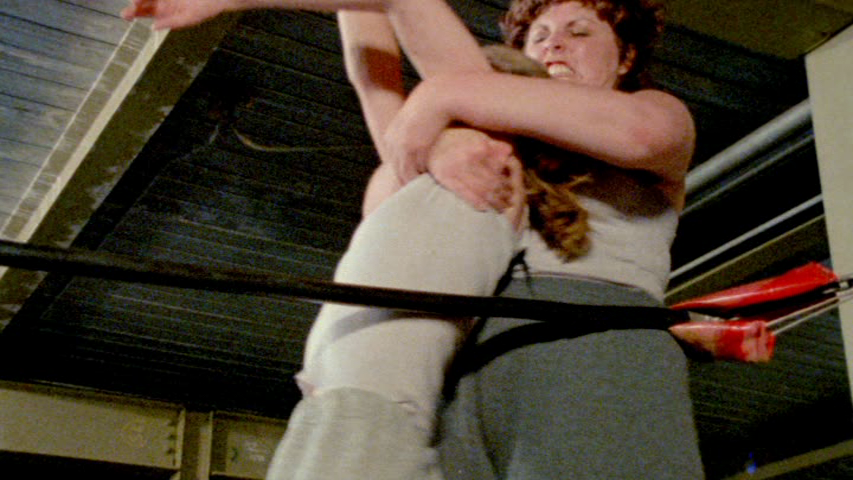 The film includes a new commentary track by Louzil, recorded this February.  Louzil often just describes the action on screen (and after a certain point, the commentary track seems a few minutes ahead of the film itself) and you kind of wish he’d had a cast listing in front of him to help remember names, but when he does talk about the film’s backstory, his memory is crisp and informative.  There are a few bizarre instances that you’d wish he’d elaborate on, like an offhand comment that “Indians are rapists, that’s what we say to people” (!?), but It’s certainly an engaging track that should please any fans of the film.

Also included is a brief introduction by Troma head Lloyd Kaufman, who delivers the expected mixture of interesting information (the distribution of independent films in the ‘80s) and self-serving distraction (he keeps mentioning SIZZLE BEACH U.S.A.).  Kaufman hilariously tries to sell the film’s “feminist” aspects – no easy task, considering it’s a film in which the impressively dense lead female character proclaims “Cops were dying all over the place and all I could do was act like a woman!” 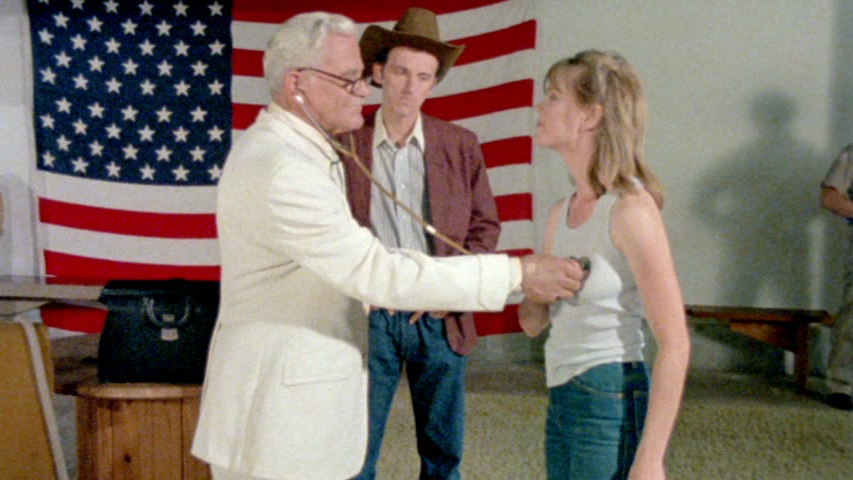 The previous Troma DVD release of the film ran 9 minutes shorter than Vinegar’s 93-minute cut, presenting the movie in a 1.33:1 aspect ratio, quite a ways off from the film’s intended 1.85:1 ratio given to the Vinegar release.  It also looks considerably better, with a restored transfer from the 35mm negative, blown up from the original 16mm.  There is a fair share of grain, but it wouldn’t feel as nicely lurid without it.

LUST FOR FREEDOM doesn’t rank among the best of the women in prison films – it’s not impressively sleazy, witty or well-made – but it’s certainly far from the worst as well.  It’s certainly entertaining, and even if the violence doesn’t come off as being barely more believable than the lead character, it’s a solid, if ultimately pretty stupid, exploitation flick that should more than fit the bill for WIP fanatics.