The ‘70s were a great time for Bigfoot, a mythical creature alleged to be hanging out among the forests of the Pacific Northwest. The fortean figure was everywhere you looked – in movies, in television specials, on monster trucks, chronicled in books, hawking bizarre footwear for kids – he was an unstoppable cultural force. It was as though the growing environmental concerns of the era had found a bizarre home in the form of cryptozoology conspiracy enthusiasts, resulting in a perfect storm of “what if” that captured the imaginations of a generation – at least for a short period of time. And imagination it had to capture, because while Bigfoot was certainly promoted to the hilt and depicted on screen, the guy always seemed to shy away from the spotlight himself, much to the chagrin of the large number of Bigfoot researchers at the time.

Vinegar Syndrome’s latest double bill in their Drive-in Collection pairs two Bigfoot films that serve as a fascinating pairing into the world of the Bigfoot phenomena. While only one of the pair actually comes from the ‘70s, the other, made in 1986, feels inches from a film that could have been made in the previous decade, and together the pair work as very different takes on the same mythical monstrosity. 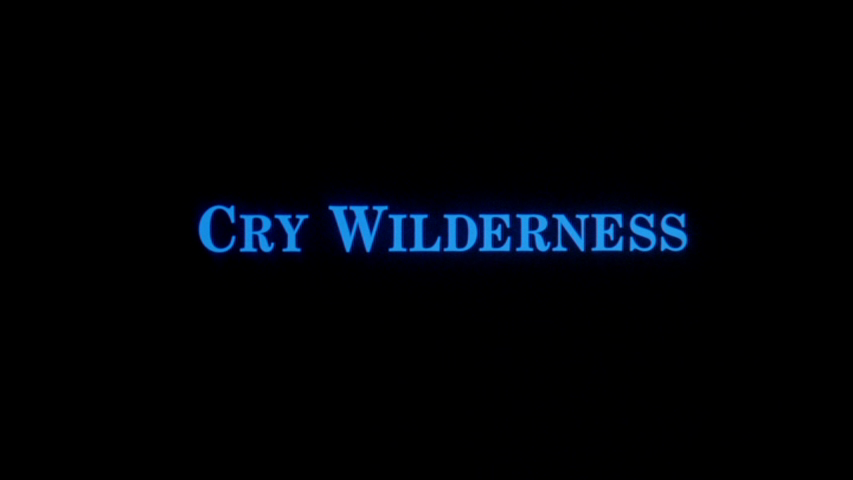 The first film on the disc is 1986’s CRY WILDERNESS, a family film from director Jay Schlossberg-Cohen, best known as the director of the musical segments from NIGHT TRAIN TO TERROR. WILDERNESS is enigmatic in the Bigfoot film canon in that the creature isn’t referenced in the title – which is fair, as he barely appears in the film at all!

It certainly looks as though Bigfoot is going to be playing a central role from the opening, as young boarding school student Paul Cooper (Eric Foster, who faced off against more lethal creatures in John Saxon’s DEATH HOUSE and the Nico Mastorakis-produced GRANDMOTHER’S HOUSE before vanishing from acting) is distracted by a large statue of the figure during a class trip to the Natural History Museum. When his teacher talks to him about it, Paul tells him that he knows Bigfoot, and hung out with him drinking Coca-Cola the previous summer when visiting his dad. He finds himself punished for his shaggy monster tales. 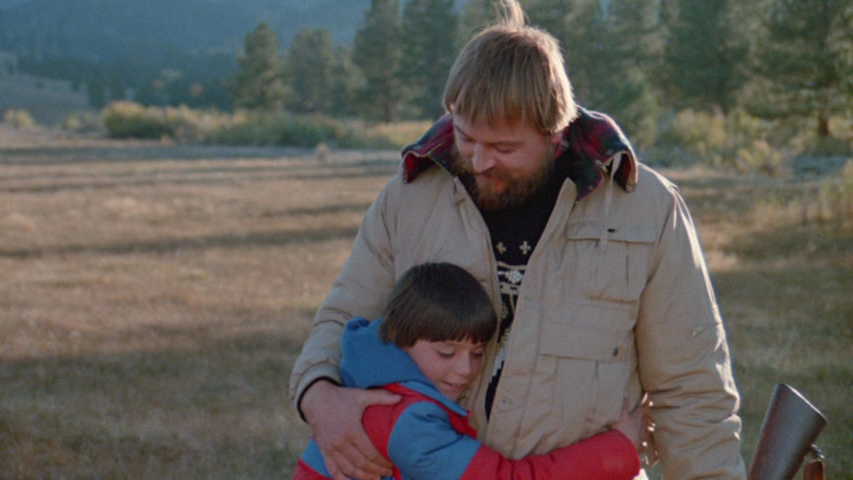 That night, however, Paul has a vision of a silhouetted Bigfoot, who warns him that his father is in danger. Paul quickly leaves the school and joins his dad Will (Maurice Grandmaison), a forest ranger currently dealing with a mysterious creature that has been scaring folks. The local sheriff wants to hunt the creature down, but Will, Paul and Will’s Native American pal Jim (John Tallman, who had a much more malicious role in Vinegar’s LUST FOR FREEDOM) want to investigate, though they’re joined by menacing big game hunter (Griffin Casey), who believes the creature in question may be more than a common forest critter.

Bigfoot is, of course, wandering around the forest in question as well, though we don’t get to see a whole lot of him save for the occasional interaction with Paul. We do, however, get plenty of scenes of wildlife, featuring critters trained by legendary BENJI filmmaker Joe Camp, including bobcats, wolves, scampering raccoons for comic relief and a tiger that has “escaped from the circus.” There’s also a female scientist with amazing hair, a relatively unthreatening motorcycle gang, evidence of poachers and the “richest man in the state,” who wants this solved before the hotel opens for the season so he can hang out with his bikini-wearing girlfriend that hands him martinis. 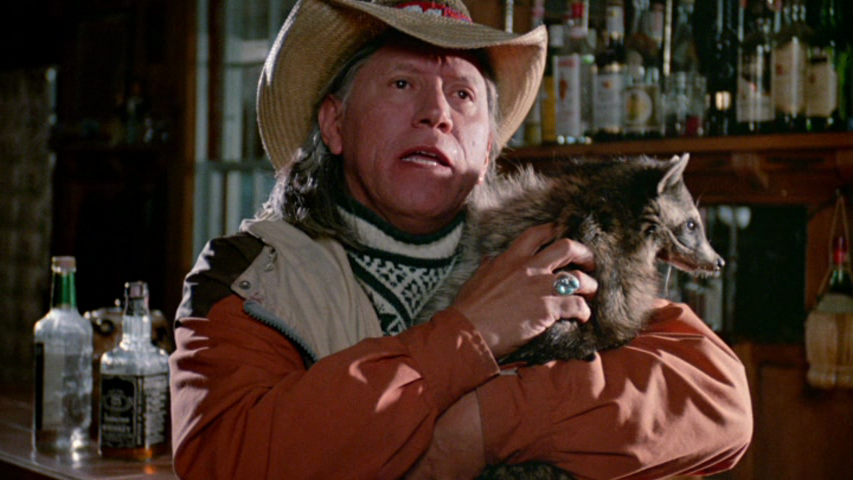 CRY WILDERNESS doesn’t really make a lick of sense, with characters introduced and vanishing from the film almost randomly and Bigfoot’s role and abilities wavering between vague and utterly nonexistent. The film was shot in several different parks and it certainly shows in the editing, with the ground switching from snow-laden to completely clear between shots and night and day being essentially interchangeable. Bigfoot isn’t even shown on screen during his big climactic rescue. Most characters sound dubbed, and the dubbed voices read every line with the urgency of a fast food cashier repeating your order. An elderly Native American who may be a ghost shows up.

Now, none of these factors mean that CRY WILDERNESS isn’t entertaining and, in fact, the film has just about the perfect ratio of genuine competence (the animals, some beautiful cinematography of the wilderness) to complete abandonment of anything that might actually exist on Earth (everything else) to make this the POD PEOPLE of family-friendly Bigfoot films. It’s completely compelling in its bizarre, ramshackle innocence – in other words, exactly what you’d hope for from the man who thought the best way to link truncated horror films together would be through a high-energy rock number involving lots of headbands. 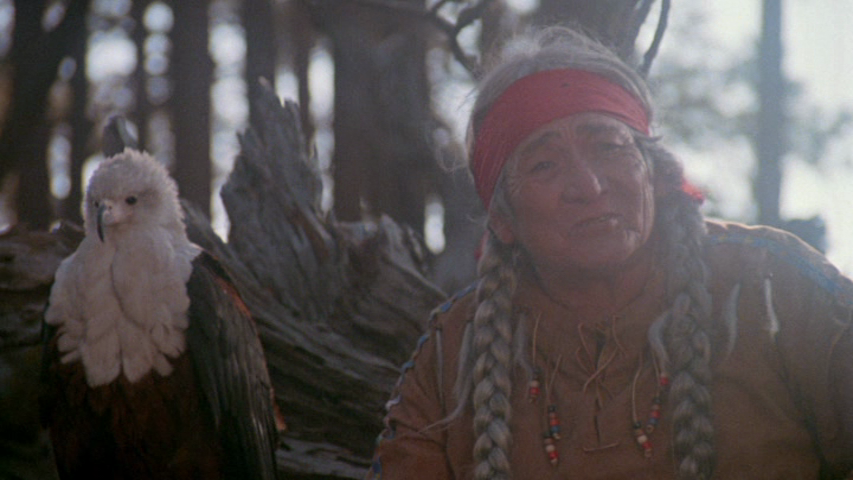 The second film on the disc, IN SEARCH OF BIGFOOT, is a much different beast. A documentary following a diverse group of Bigfoot enthusiasts varying from microbiologists to self-described “Sasquach researchers,” SEARCH is a much more heavy-handed affair, though Lawrence Crowley, William F. Miller and Jay Cohen’s film is careful to tread a thin line in treating the subject of their exploration as real or not.

The key instigator in this particular exercise is Robert W. Morgan, one of the best-known researchers in the field and writer of the “Bigfoot Observer’s Field Manual.” (He also wrote and directed the grimy drive-in pic BLOODSTALKERS!) Resembling Ben Kingsley in SEXY BEAST and occasionally emitting that level of intensity, Morgan talks candidly about the personal encounter he had with the beast in 1957, and how his quest to verify its existence has become his life. 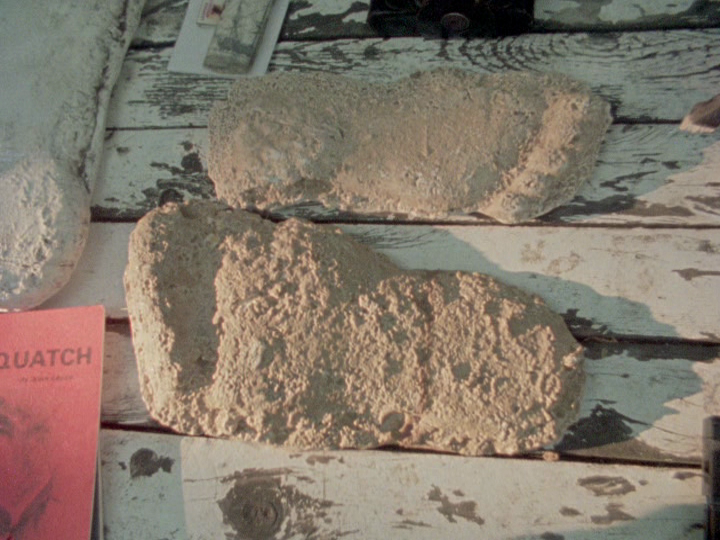 Morgan and various members of his team wander around the area of the “inactive” Mt. St. Helens – an area that would, ominously, become much more active a few years later. We meet Mike, a survivalist who spends five days and comes back with some vague stories of maybe seeing something. We hear from a group of loggers, who claim to have seen a “big black glob” watching them. Human-like footprints are examined and cast, and a few local folks that don’t seem to be all that bright talk about their own interactions with the creature, including one who talks about playing catch with the Sasquach as a child.

It all fees a bit random, though it’s a perfectly fine leisurely time watching various researchers wander around the impressively beautiful area. The only real hint of conflict comes in the form of Morgan’s brief discussion with a pair of other researchers, as they debate whether killing the creature should be avoided at all costs. In the end, as you can probably surmise, little is found and an escalating fire causes the trip to be cut short, though “The Rookies” star Sam Melville shows up (!) and a few hair samples are taken – though it turns out that the hairs are from a human leg. 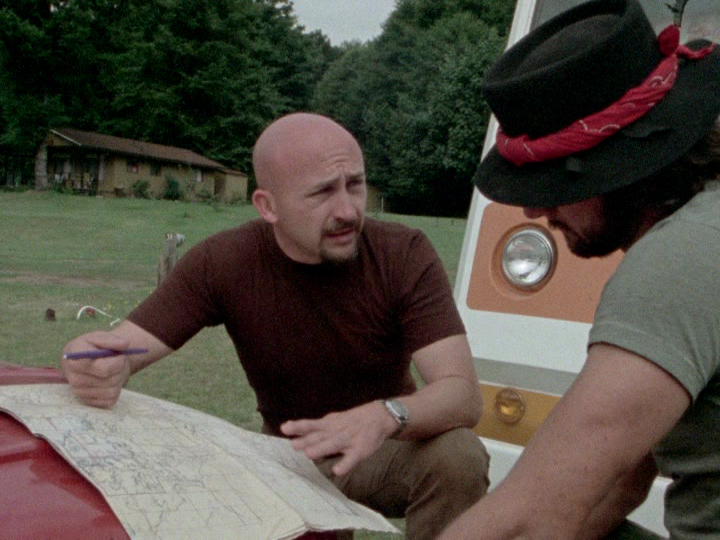 IN SEARCH OF BIGFOOT is a mild but adequate example of the sort of fortean documentaries that thrived in the ‘70s, a bit like a more low-key version of the Sunn Classic Pictures output of the time. Phil Tonken’s narration is soothing and never judgmental, though the harmonica-based score that repeats endlessly may drive you insane after a while.

Vinegar Syndrome has just a fine job bringing such an eclectic double-bill of two genuine obscurities to DVD. Taken from camera negatives, the transfers look quite good, with only some minor grain in the case of BIGFOOT, meaning that the most actively interesting part of the films – the wilderness cinematography – remains intact. SEARCH looks a little muddy due to its 16mm origins but is presented in its original 1.33:1 aspect ratio, where WILDERNESS, a more recent film shot in 35mm, is a pleasure to watch in its original 1.85:1 aspect ratio. No extras are included. 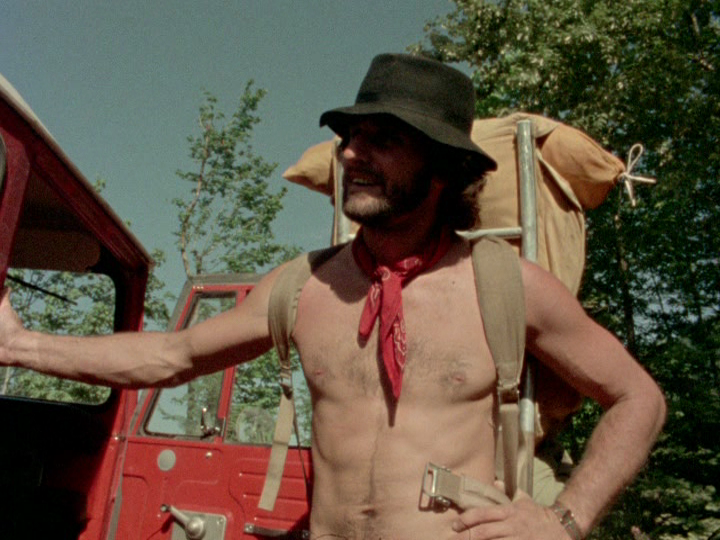