Aside from the PRETTY PEACHES Alex de Renzy double feature and the first Bob Chinn disc (SADIE and THE SEDUCTRESS), Vinegar Syndrome’s Peekarama line has focused mostly on adult films from the 1970s. Those discs dipped their toes into the 1980s, and the latest Peekarama follows suit with two films directed by Chris Warfield under the pseudonym “Billy Thornberg.” Warfield was a film and television actor who appeared in television series such as PERRY MASON, MY THREE SONS and LASSIE before moving entirely to adult feature film work on both sides of the camera (acting, writing, producing and directing) in the 1970s.

Warfield’s long career in show business clearly paid off in technical experience: PURELY PHYSICAL (1982), the first film on this disc, is one of the best adult films Vinegar Syndrome has released yet. It opens with a sequence following aspiring writer Kathy (Laura Lazare) riding a bike through a scenic coastline area to apply for a job as a night clerk at a cheap motel. Set to upbeat lounge-pop, this opening has a look and tone approaching Radley Metzger territory. Once the action is settled at the motel, Kathy gets the job, and she imagines the sexual adventures of the guests who come into the motel, although sometimes the reality does not quite match up with her imagination. Occasionally, she interacts with the guests more directly, but she’s generally very professional. 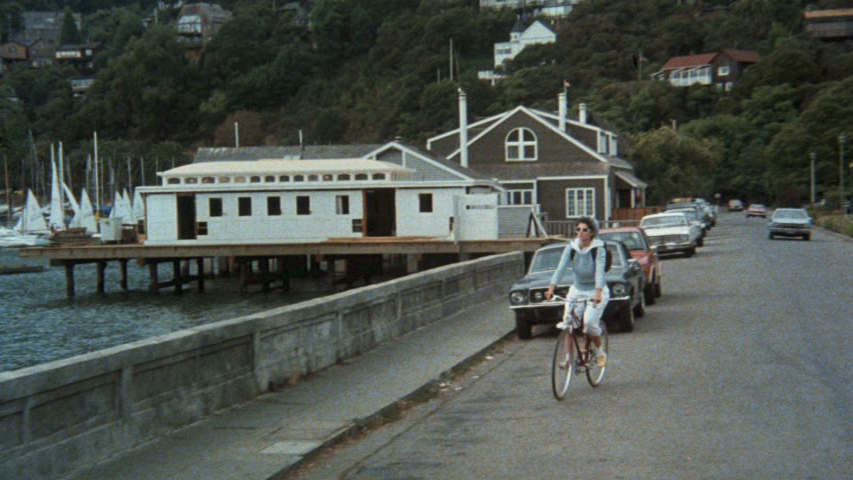 PURELY PHYSICAL is not strictly a comedy, but it does feature some hilarious moments and has laughs during the sex scenes. In fact, more than the majority of adult films even of its own era, PURELY PHYSICAL fleshes out its characters with dialogue during its sex scenes that make them more interesting and move the nominal story forward. The first scene with teenage lovers Bernard (Albert Johnson) and Dorothy (Jade Wong) is funny, awkward, and cute. A later scene between movie trivia buff Charlie (Michael Morrison) and Iris (Tigr) is laugh-out-loud funny: Charlie expresses admiration for Iris’s ass, to which she instantly replies “Do you want to lick it? It would probably do you some good!” The film is technically on a level on par with smaller studio films or contemporary films by independents like Crown International Pictures such as the same year’s THE BEACH GIRLS, only it’s actually smarter and funnier than that film could hope to be.

After PURELY PHYSICAL, CATHOUSE FEVER (1984) comes as something of a disappointment. Office worker Becky (Becky Savage) decides that she’s had enough of fantasizing about all the men she would like to bed and answers an ad in a newspaper for a brothel in Las Vegas. She flies out to Vegas to try being a hooker for a day, and gets exactly what she bargained for. There’s even less of a story through line here than in PURELY PHYSICAL, although it still has some of the fun character work that made that film such a success. The focus here, though, is much more firmly set on the sex scenes, and while it’s nicely shot, there are some weird editing issues and other technical problems that are nowhere to be found in PURELY PHYSICAL. Additionally, that film never quite reaches any point as ridiculous as the scene of Becky nude except for a full feather headdress, servicing Tex (Jerry Davis), a bearded redneck who never takes off his black cowboy hat. 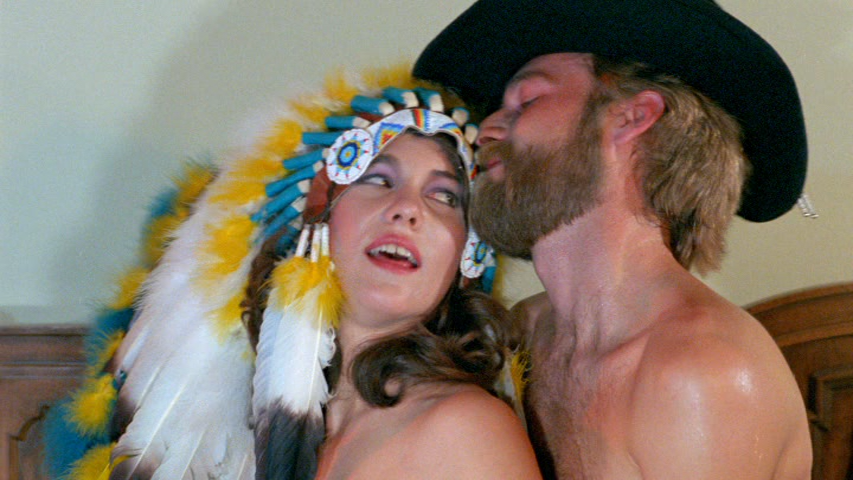 Still, this disc would be worth paying full price for PURELY PHYSICAL alone. Scanned in 2K from the original camera negatives, both films look great, and special note is worth making of the Las Vegas night scenes in CATHOUSE FEVER. Those scenes in particular look spectacular, bursting with color. The disc includes the trailers for both films, and in that category CATHOUSE FEVER is the hands-down winner thanks to a thinly-disguised cover of Ted Nugent’s “Cat Scratch Fever” replacing those words with the title of the film. Any fan of 70s and 80s adult film or anyone looking for a good place to start exploring the genre will find this a worthwhile purchase.