Ah, we get to dip our toes in that beautiful pool called the ‘70s disaster movie. When producer Ross Hunter and director George Seaton brought us a very eventful evening in a major metropolitan AIRPORT in 1970, they had no idea they were starting a new genre in film–one that led to very successful flicks about capsized ocean liners (THE POSEIDON ADVENTURE, 1972) and burning skyscrapers (THE TOWERING INFERNO, 1974). Less successful efforts about doomed blimps (THE HINDENBURG, 1975) and killer bees (THE SWARM, 1978) followed. But the formula was the same: take a large, well-known group of actors (the “all-star cast”), put them in deadly danger from some natural or manmade cataclysm, throw in some special effects and stunts, and kill off about 2/3 of the cast across a couple of hours. Simple. And profitable.

Amazingly there were something like 21 of these movies across the decade, and that’s not counting several TV movies which also tried to bring us the spectacle, but usually came off pretty sketchy thanks to the TV movie budget. Eventually the genre neatly came to an end in 1980 with the release of producer Irwin Allen’s WHEN TIME RAN OUT (how fitting, that title), which gave us a volcanic eruption right next door to a new hotel resort. Unfortunately for Allen, audiences didn’t want it, and used the gift receipt to take it back. Also, that same year, AIRPLANE! came out and mercilessly ribbed the genre into a coma for about 16 years. The advent of computer generated imagery in special effects has brought the disaster movie back in full force for the last twenty-plus years, starting with INDEPENDENCE DAY in 1996 and continuing right on through scads of SyFy channel movies.

But we’re going old school in this new Blu-ray from Shout Factory. It’s off the scale seismic activity in EARTHQUAKE. 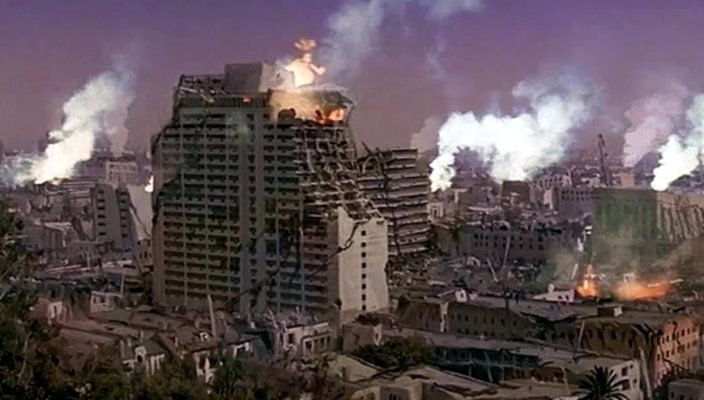 The problems start small as a technician at the California Seismological Institute figures out a huge quake is imminent, but he is disbelieved. Then someone at a dam near Los Angeles manages to drown in an elevator shaft (!) and the state’s foremost seismologist and his assistant are killed when the fault trench they are placing experimental sensors in closes up on them. The Mayor (John Randolph) of Los Angeles is told of the threat but decides against warning the populace for fear of mass panic if “The Big One” hits.

The Big One hits.

The city is almost obliterated by a 9.9 Richter Scale quake and then it’s up to the surviving cast members to try to get to safety from weakened buildings, downed power lines, and fires–even as aftershocks continue to damage the few standing structures further. And they’re not even aware that that aforementioned dam has been severely weakened and is likely to send its crushing waters cascading through what little remains of the city. 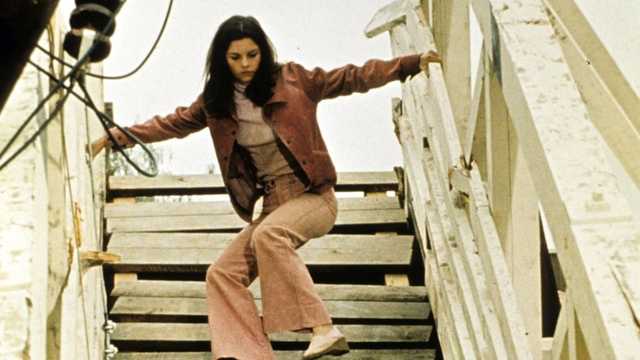 Man, I love the ‘70s disaster movies. This one falls in the middle of the pack quality wise, but as the only disaster movie giving us an earthquake it is a must view for fans. The script–started by Mario Puzo before he went off to THE GODFATHER: PART II and finished by George Fox (his only produced screenplay)–is no great shakes (see what I did there?). It’s pretty soapy in the opening scenes–with the love triangle between Heston, Gardner, and Bujold particularly lugubrious–but thankfully those scenes give way once the ground starts shaking and things pick up considerably.

The character who comes off best is beat cop Kennedy, who comes into the picture with a squealing tire car chase and who gets to show more facets of his beefy everyman character than anyone else in the picture. Almost every review singles out Gardner for ridicule, saying the actress was too old for her role and that it’s ridiculous that she is playing Greene’s daughter, but that’s all nonsense. Yes, both actors were in their 50’s but she looks like she’s in her 40’s and he looks like he’s in his 60’s. She and Heston are also one year apart in age. Too old? That her character is a shrill shrew is not the fault of the actress; it’s how the character was written and I give kudos to her for committing so thoroughly that she has not one likable or sympathetic moment onscreen. That’s brave for a former leading lady! Also usually singled out for poor acting is Marjoe Gortner, but I like him in this role. He brings the creepy from his first moment onscreen and he makes the best of the odd character elements he’s given (he wears a weird blonde wig when he goes on National Guard duty to cover his non-regulation length brown locks, for example).

You know who does deserve ridicule? Walter Matthau, who apparently came into this at the behest of producer Jennings Lang. Wearing an outfit that was ridiculous even in 1974, his drunk shtick undermines the drama instead of providing what I guess was intended as comic relief, and his demand to be credited with a nonsense name (Walter Matuschanskayasky) has incorrectly haunted reference materials as Matthau’s real name ever since (it isn’t). The rest of the cast is good, with familiar faces in nearly every scene.

Universal and director Mark Robson fast-tracked EARTHQUAKE through production. According to the behind the scenes features, the time from greenlighting the project to the opening day in theaters was nine months. The studio wanted to beat THE TOWERING INFERNO to theaters and did so by about a month. Despite that speed, the movie is surprisingly well crafted, and other than the script being a little mushy, stands out as a prestige production for the studio, even if it was hopping on the disaster bandwagon.

Where the movie shines is of course the special effects. If a high definition release in 2019 shows some of those practical effects a little too well, that’s a necessary evil with the format. A talented crew of artists and technicians provided audiences with some amazing destruction using both full size sets and miniatures, all of it tied together with Albert Whitlock’s astonishing matte paintings by cinematographer Phillip Lathrop with impeccable craftsmanship. The movie looks terrific on the Blu-ray as well, with the vibrant ‘70s color palette on full display and the blacks full and deep in the darker tunnel scenes. By the way, if you’ve not seen this before but feel like you’ve seen parts of the earthquake somewhere, it’s certainly possible as Universal has been letting other shows use some of the effects from this film as stock footage ever since.

The sound is also well handled on the disc, although there’s no way to port over the most significant aspect of the theatrical presentation. It was the first ever movie released in Sensurround. With an extra set of special speakers installed in the theater, Sensurround utilized ultra-low frequency sound waves to produce real vibrations and rumbles which could actually be felt by the patrons. This process was used only during the noisier parts of the earthquake scenes since the low frequency also produced sound in addition to the vibrations. During EARTHQUAKE‘s run, Mann’s Chinese Theater in Los Angeles legendarily developed cracks in the ceiling (however, the theater owners installed netting to catch the plaster rather than end the hit film’s run) and several people said Sensurround gave them nosebleeds. It was also reported that some theaters and adjacent buildings around the country suffered light structural damage from the beefed up vibrations. In the wildest tale, one poor soul somewhere supposedly suffered cracked ribs! I’d pay real money to see this movie on the big screen in Sensurround! 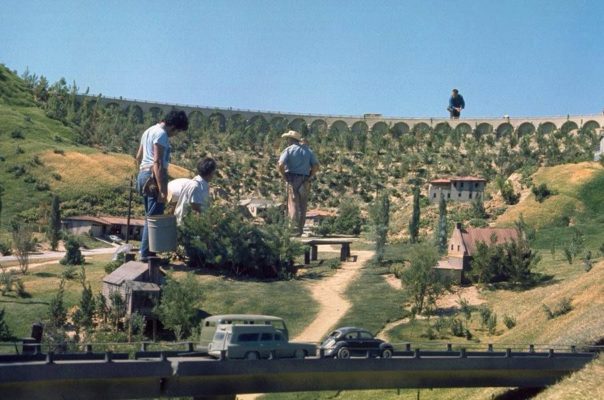 So EARTHQUAKE is a good-not-great example of the genre, and this new release by Shout Factory far outstrips the barebones release Universal put out in 2013. This edition is a new 2K scan of the original film elements, and Shout has put together a fine package of special features, including a second disc. Disc one has the theatrical cut of the movie and several bonus features. Along with the expected trailer and TV and radio spots, there are some great still galleries with wonderful behind the scenes shots showing the effects crew looming over the miniatures. There are also vintage interviews with Heston, Greene, and Roundtree. What’s fascinating about these clips is that the actors are answering unheard questions. These audio clips were sent out to radio stations around the country along with a list of prepared questions. The local radio personality would then ask the canned questions which led into the actor’s answer, giving each station a “personal interview” with the stars of the movie. I do wish Shout could have included a document of these questions which would allow the viewer today to interview the actors too!

The second disc is also a treasure trove for fans. It contains a new 2K scan of the longer television edit of the movie. When it premiered, NBC decided to expand the movie to fill four hours with commercials spread over two nights. They added back deleted scenes to extend the movie, but more surprisingly, they shot an entirely new subplot! It’s really nice to have this record of how movies used to be presented on network television preserved, with the cuts of objectionable material intact and the whole thing in windowboxed 4:3. It even gives you the cliffhanger ending of the first night with the end credits leading right into the recap at the start of night two (surprisingly a week later instead of on consecutive nights). None of the twenty or so minutes of restored material is essential. You get additional scenes (Gortner being creepy to Principal, Kennedy’s station house collapsing during the quake), bits clipped from existing scenes (more with the guys watching the dam for signs of weakening), and then you get that whole new sequence of a young married couple (Debralee Scott and Sam Chew) on a jet airliner trying to land in Los Angeles just as the quake hits–tearing up the runway–with a miniature airliner on display and actor Clint Richie as one of the pilots (I’d love to know the details of when this was shot). But it’s all fun and even with the added running time doesn’t bog the movie down.

The bonus features here are also great, with three new featurettes totaling about forty minutes looking at John Williams’ score, the matte painting magic of Albert Whitlock, and Oscar winning sound effects genius Ben Burtt talking about EARTHQUAKE’s theatrical presentation in Sensurround. You can also watch the added scenes isolated from the movie and there are two more additional scenes that were not included in the TV cut because the film elements had degraded.

If you enjoy these movies this is definitely a recommendation as the bonus features and that TV cut make this a worthwhile purchase. Don’t be all shook up even if it’s a double dip from the original Universal release. You can always donate that one to your local library!

EARTHQUAKE is now available on Blu-ray from Shout Factory. 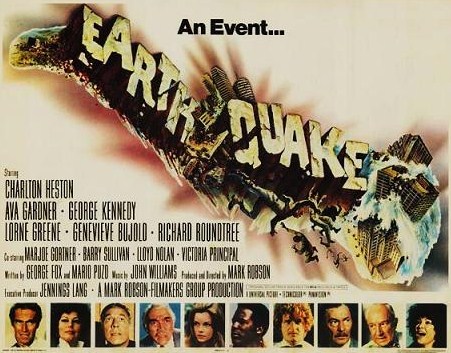