Given what a huge fan I am of both Brian De Palma and Paul Schrader, OBSESSION has long been a massive blind spot in my appreciation of both filmmakers’ careers. The fear when putting off seeing a long-anticipated film is that it will not live up to the expectations that I have set up for it. With OBSESSION, the expectations I had are only partially met, but that does not lead to disappointment in this case due to how strongly the film veers away from simply being De Palma’s answer to VERTIGO (my expectation). 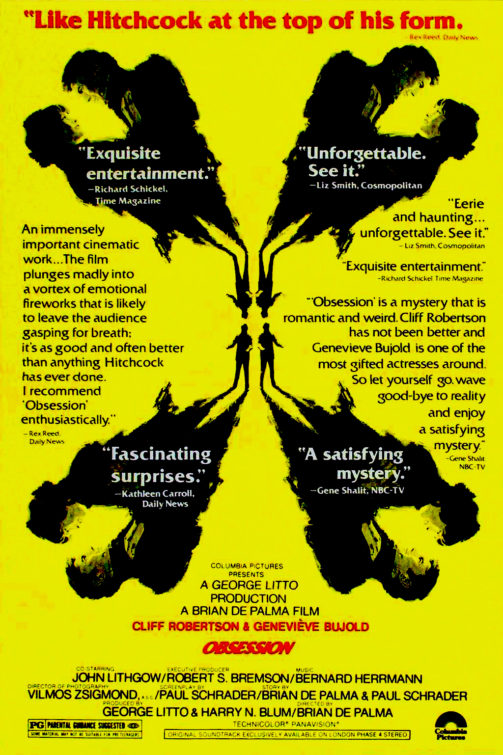 A lengthy prologue set in 1959 finds semi-wealthy land developer Michael Courtland (Cliff Robertson) celebrate his ten-year anniversary with his wife Elizabeth (Geneviève Bujold) at a party surrounded by their friends. They dance with their ten-year-old daughter Amy (Wanda Blackman) and project the air of true love that lives up to the toast given by Robert LaSalle (John Lithgow), Michael’s business partner, of being a romance for the ages. Of course, this being a film written by Paul Schrader and directed by Brian De Palma, this fairy tale set up quickly unravels.

Elizabeth and Amy are kidnapped, with a ransom of $500,000 demanded. Michael is counseled by the police to go through with the drop, but not pay the money to strengthen their bargaining position. To put it simply, everything goes wrong, Elizabeth and Amy are killed in the rescue attempt and Michael—crippled by guilt that he caused their deaths—erects a massive monument in their honor on a large plot of valuable land that he turns into a park.

Cut to fifteen years later and Michael is still a grieving shell of a man. He and Robert take a business trip to Florence, Italy (where he met Elizabeth) and to his great shock, he meets Sandra (also Bujold), an Italian art restorer who is the spitting image of Elizabeth when she passed away. As the title suggests, Michael becomes obsessed with Sandra, bringing her back to his home in New Orleans with plans to marry. But can past sins and mistakes be so easily erased with a miraculous second chance?

OBSESSION is a fascinating film because it is largely a classily put together, old-fashioned romantic melodrama that takes a right turn into subject matter that would still be taboo today. For the first two acts, De Palma makes what can be argued to be his least boundary pushing (in terms of subject matter; his flamboyant visual style is fully intact) film before grabbing the kinky subtext present in both VERTIGO and his own film and yanking it to the surface. The change in tone that accompanies the major third act reveal is jarring, but it should be. This is De Palma and Schrader both paying homage to the films of Hitchcock while skewering the psychosexual themes of so many of them.

To make that point even more explicit, De Palma brings in Hitchcock’s frequent collaborator Bernard Herrmann to do the score and uses the same relationship of an older man romancing a much younger woman that was so often a trope in Hitchcock’s films. That second idea requires the use of diffused lighting by cinematographer Vilmos Zsigmond in the 1959 scenes to make the 52-year-old Robertson appear to be in his mid-30s. The lighting choice is carried through the rest of the film, giving the proceedings a dream-like feel that highlights the almost haunted atmospheres of New Orleans and Florence.

The entire film is thankfully not just a riff on VERTIGO. The third act of OBSESSION goes full De Palma with split diopter shots, a constantly roving camera, gratuitous slow-motion, and a some nifty forced perspective/practical effects work that takes full advantage of Bujold’s tiny stature in an astonishing sequence. With Herrmann’s bombastic orchestral score pushing the over-the-top momentum forward, the last fifteen minutes of the film practically swoons.

While Bujold gives an alternately enigmatic and emotional performance and Lithgow indulges in a “genteel Southerner” accent that is a full ham dinner with all the trimmings, Robertson is simply miscast. His stiff performance feels phoned in—especially when he has Bujold and Lithgow acting circles around him in nearly every scene. Thankfully, Sandra becomes the protagonist halfway through the film, allowing Bujold to carry OBSESSION across the finish line. If the audience had been asked to identify with and follow Robertson for the entire film, it would have been a flat experience even with De Palma’s stylish visuals.

This Blu-ray presentation from Scream Factory does a solid job of capturing the beautiful work of Zsigmond, but I wish there had been a full restoration done. That said, it does feel like this is probably the best an independently produced film from 1976 is going to look and sound if the camera negative is unavailable. A commentary by film historian Douglas Keesey is included that is informative and always interesting, if a little dry. New interviews are included with producer George Litto and editor Paul Hirsch. Of the two, Litto’s pragmatic yet affectionate walk down memory lane is more interesting, although Hirsch has great anecdotes about what happens when you get on the wrong side of Bernard Herrmann. An old featurette that I assume was carried over from a previous DVD release of the film features interviews with De Palma, Bujold, Robertson, Hirsch, and Litto. The featurette is cheesy but it is amusing to hear how different Litto and Hirsch sound now about the trials of working with Robertson (vanity over how he was shot, disrupting Bujold’s performance) versus the fawning lovefest of their older interviews.