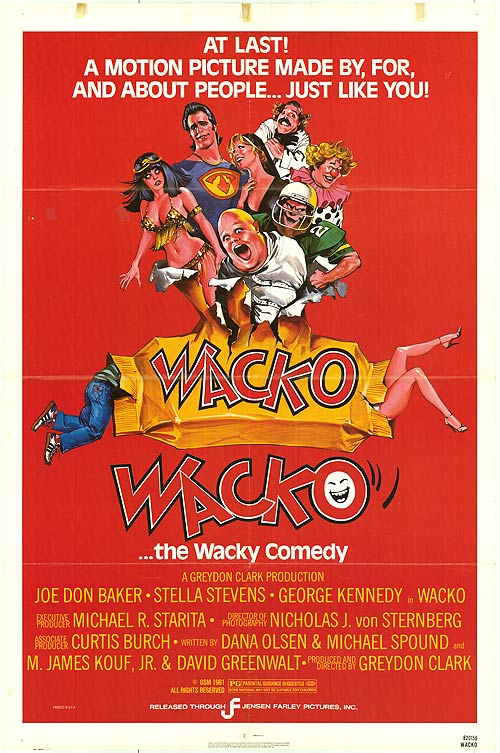 Hollywood has rarely found a trend it couldn’t immediately send up, so it’s no wonder studios inundated theaters with scores of slasher spoofs just as the genre was hitting its stride. Arriving in most American theaters in early 1983, WACKO was a relative latecomer to the trend, shuffling in behind STUDENT BODIES, PANDEMONIUM, and CLASS REUNION MASSACRE in an effort at shoveling dirt over the splatter movie’s grave. It would prove to be a futile effort of course: not only would slashers persist well into the next decade (and beyond), but WACKO is a pretty limp-wristed attempt at poking holes into an easy target. Armed with a juvenile approach, absurdist humor, and absolutely no regard for taste, Greydon Clark somehow manages to show his ass when trying to take down slasher movies, kind of like a loudmouth in a bar drunkenly trying to punch down at someone smaller than them, only they flail away, wildly swinging before crashing to the ground in a stupor. It’s funny, but not in the way it was intended.

Figuring out WACKO’s painfully unsubtle schtick is easy; the only question is how quickly it becomes obvious. Maybe it comes with the opening line of dialogue, where our masked killer — later dubbed the Lawnmower Killer — declares “death to all teenagers who fuck,” effectively cutting right to the punchline without even a hint of wit.

Or maybe it comes soon after, when George Kennedy is introduced as a peeping-tom dad spying on his own daughter, a jaw-dropping bit that becomes even more outrageous as it becomes a recurring gag.

Perhaps it comes a few minutes later, when the daughter, Pam (Claudia Lonow), is so eager to attend the “Halloween” prom that she ties up little sister Mary in the car, alongside a couple of helpless trick-or-treaters, all of whom look on in horror as big sis’s guts splash onto the windshield after an encounter with the Lawnmower Killer.

But surely you know exactly what WACKO is up to when it awkwardly cuts to thirteen years later, when Mary (Julia Duffy) is eagerly preparing to lose her virginity at her own Halloween prom, despite harboring enough trauma to screw her up for life. It doesn’t help that her boyfriend Norman Bates (Scott McGinnis) revs up like a lawnmower every time he has a boner. Also not helping matters: the fact that the Lawnmower Killer was never caught. Even worse: the town’s last — and seemingly only — hope is a tub of marshmallow creme that’s taken human form in the shape of Joe Don Baker, here playing the intrepid Dick Harbinger, who pours coffee right into his briefcase to drink as he surveys crime scenes and rants about the Lawnmower Killer.

All of this happens within the first ten minutes or so of WACKO, which isn’t a farce so much as it’s an assault. Barely a moment passes without a desperate attempt at coaxing laughs or eye-rolls (it’s mostly the latter) with lame jokes and zany antics. Everyone’s mileage varies with humor, of course, but I find WACKO to be so profoundly unfunny and stupid that it earns my begrudging respect. It’s certainly be insipid, broad, and just plain dumb, but it’s also intensely committed to its bit.  From its first scene to the last, it never wavers in its anarchic, live-action cartoon approach to spoofing body count movies. No joke is too ridiculous or tasteless as the film attempts to rewire your brain with its own oddball logic: might look like a slasher movie, but it’s got the heart, soul, and hormones of the era’s teen comedy fare.  It’s basically SCREWBALLS THE 13th, with all the nonsense that entails — though one might certainly make the argument that the gore quotient is lacking.

Instead of blood and guts, WACKO offers an abundance of non-sequiturs, bizarre sight gags, recurring jokes that get old quickly, and Joe Don Baker calling everyone “nimrods” and “gonads” at every turn, whether it’s directed at people heckling him or the weirdo “Vice Principal of Vice” at the local high school. The script is absolutely exhausting in its insistence on throwing all of the jokes to the wall and seeing what sticks, and they empty their clip of everything: talking elephants, magic shows, absurd red herrings, fourth-wall breaks, and Baker eating a twinkie dipped in ketchup. Sometimes, WACKO feels like you’ve wandered into the writer’s room for a sketch-comedy show where none of the material has been deemed unusable.

To the film’s credit, some of this stuff does stick, if ever so fleetingly. A lot of it involves Baker’s noble attempt to slog through it, as it seems like he’s tasked with some of the worst material. But even he has his moments, like a quick shot that reveals Dick Harbinger’s son (dubbed Little Dick, natch), played by Baker himself in baby attire. That might not sound great, but it’s positively genius compared to another gag that finds Dick at the table with his extended family, all of whom are African-Americans because that’s the joke. Well, that and the giant Twinkie they’re cutting up and passing around the table. WACKO might not have the best jokes, but it might have the most jokes.

Duffy is also a bright spot as our cheerleading heroine who just can’t wait to lose her virginity. She’s positively delightful, a genuine sweetheart drowning in a sea of obnoxious, often mean-spirited shenanigans, just trying to do her best to give WACKO the faintest semblance of an empathetic center.  Like Baker, she nobly struggles against the current of madcap antics that often thwarts her. No scene captures this struggle better than a fairly funny — perhaps even bitingly satirical — locker room speech that ends with Mary’s cohorts pumping up her breasts, causing her to float out of the frame. You win some in WACKO, you lose some. You mostly lose.

One of the wins comes in the form of a young Andrew Dice Clay, here playing meat-headed jock Tony “The Schlong” Schlongini, so named because — you guessed it — his hose is huge. Like everyone else, he’s unnervingly horny at all times, which proves to be especially awkward when his enormous boner tips over the dinner table right in front of his girlfriend’s parents. When the script isn’t objectifying Clay’s member, it tasks him with putting on a pretty blatant “Travolta in GREASE” imitation, right down to an introduction that has him doing a musical number. It’s not exactly a far cry from the schtick he’d make famous some years later, but there’s an innocent, doofus charm to him here that deserves a better movie.

Far from Greydon Clark’s finest hour, WACKO is nonetheless a sight to behold, if only because it’s so unhinged and wrong-headed. It pummels you into submission, only instead of tapping out, you simply find yourself yielding to its demented sense of humor, anxiously awaiting whatever gag lurks around the corner. Sometimes you get fiery car-crash stunt work; sometimes you get Joe Don Baker in a clown outfit informing a couple about their daughter’s brutal murder. WACKO is the textbook definition of grotesque: a comically, repulsively ugly, and distorted funhouse mirror for a collision of genres that leaves a trail of wreckage you can’t help but gawk at. 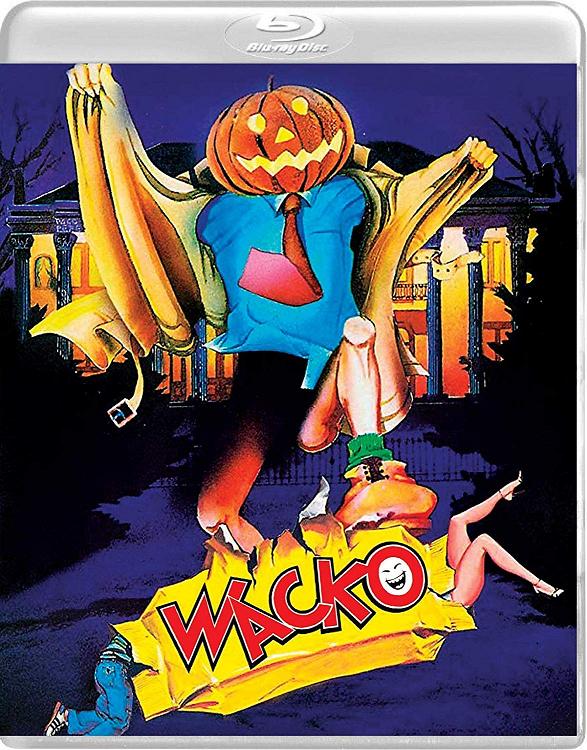 WACKO has been a notable no-show in the digital era, at least for enthusiasts of this ilk (I like to believe Joe Don Baker has at least inspired some kind of cult). Vinegar Syndrome recently rectified this with another stellar DVD/Blu-ray combo edition that boasts a pristine 4K restoration struck from the original 35mm elements.  It’s hard to imagine WACKO ever looking much better than this on home video, as its candy-colored aesthetic pops off the screen through a subtle layer of welcome film grain.  The DTS-HD MA mono track is solid too — it’s actually quite robust instead of the hollow, tinny tracks that a lot of cult films from this era are saddled with on home video.

The most notable special feature is Clark’s feature-length commentary track, which is supplemented by a 7-minute interview with DP Nicholas von Sternberg, who doesn’t seem to be too enthused about WACKO. Most of his anecdotes have him reflecting on how difficult the production was at times thanks to a quick shooting schedule. He seems more eager to talk about both the actors he worked with here and other directors he collaborated with during the course of his career. Finally, a nine-minute outtake real proves that there apparently was some material Clark and company deemed unfit for consumption, and they’re presented here without sound.

A theatrical trailer and a killer slipcase are also included, completing a nice package for the one and only movie in this world that features the Diceman doing a riff on THE EXORCIST‘s head-spinning gag. If nothing else, WACKO has that going for it.