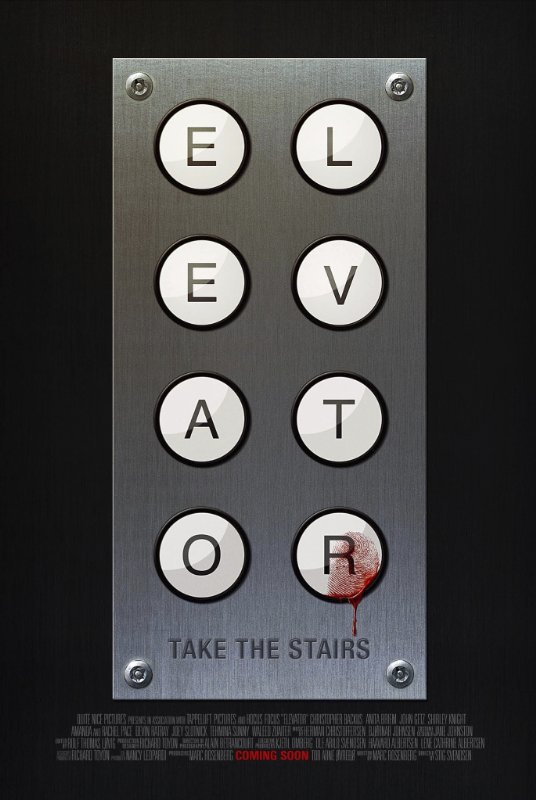 Elevator number 5 in the building that I work clearly has a vendetta against those on our floor. You can press the button representing our floor (12), and you’ll be taken up as far as the 11th when the transportation device will suddenly stop, the doors will open, the “12” light will go off, and before you have a chance to react, the doors will close again and the elevator will head straight back down to the ground floor, where you will have plenty of time to swear and move to a different elevator, cursing yourself for not remembering that that particular conveyor is a cruel, spiteful bastard who mockingly laughs at your foolish attempt to get to work on time.

Because of this, I’ve developed a natural suspicion of elevators in general, and it’s a suspicion that seems fairly common even if the DSM has yet to give a specific name to the fear of getting into one of those vertically moving death traps. It’s not all that surprising that this fear has been the basis for several films, ranging from Dick Maas’ 1983 evil elevator pic THE LIFT to, er, Dick Maas’ 2001 evil elevator pic THE SHAFT, or from the 1974 TV-movie THE ELEVATOR to the recent M. Night Shyamalan-produced DEVIL.

Into this oddly crowded sub-genre steps the accurately-named ELEVATOR, the first English-language film from Norwegian director Stig Svendsen, a title recently available on Netflix streaming. While the cover art for the film makes it look as though the plot contains an evil elevator that sucks up young women, the film itself is more akin to the likes of FIVE CAME BACK or LIFEBOAT (which is name checked) as a group of diverse people are trapped in a small place and try to get out before really bad things happen.

In this case, the title object is in action at a Wall Street high rise, in an effort to bring nine people from the ground floor to the penthouse for a ritzy party that promises a bold announcement by a brokerage company’s president. The president himself, played by THE FLY’s John Getz, is on board with his granddaughter, along with a group of presumed employees, a security guard, and a stand-up comic hired to perform at the party. 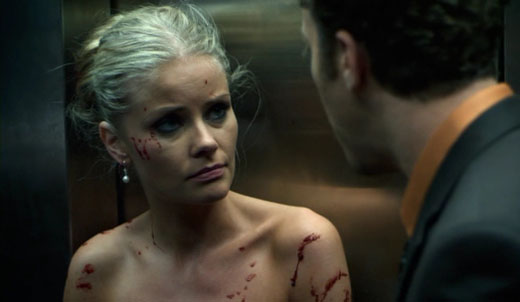 When the granddaughter, attempting to trigger the acrophobia of the irritating comic (Joey Slotnick), hits the emergency stop, the elevator containing the group becomes stalled between floors even after the button is released. Contacting the service team does little help, and soon enough, the entire group begins focusing their energies on either stressing out or trying to get others not to stress out, which becomes even more urgent once they realize that one of their member has a bomb on them that’s set to go off an a limited amount of time.

As with any high-concept, single-location thriller, the execution of the film is dependent on having interesting plot twists and characters that are worth caring about. ELEVATOR doesn’t always manage both, but it does manage to have a handle on creating humor out of the characters that feels natural rather than forced, resulting in identifiable people on screen that are, if not entirely sympathetic, certainly human, and Oscar nominee Shirley Knight stands out as an older woman with a score to settle with the company president. 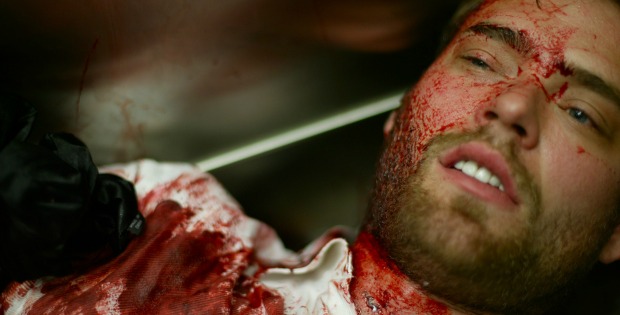 The plot twists aren’t quite as successful, often relying on coincidences that stretch the boundaries of suspension of disbelief far more than they should, but trying to keep audiences interested in a group of characters in a very isolated location for 90 minutes is certainly no easy task, and writer Marc Rosenberg certainly puts up a valiant effort. Even so, there is a bit of cheating towards the end when the film begins having scenes outside the location that breaks the nicely claustrophobic tone.

Despite these flaws, ELEVATOR is never less than engaging, even if the thriller aspects don’t work all of the time. While mis-marketed as a horror film, ELEVATOR does have some minor gore (you wouldn’t want a thriller about an elevator to go by without someone getting caught between floors) that should sooth those looking for a scarier experience, but suspense fans should be at least mildly engaged the whole way through.