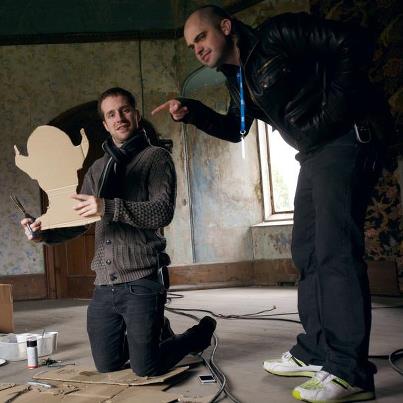 Sweetback (SB): You’re in a unique position as a film-maker as you’ve had extensive experience in a variety of visual arts. Talk a little bit about your passion for design, and how that influenced your decision to get into directing and working on films in general.

Christopher Goodman (CG): A background in visual arts isn’t necessary to direct films but it does steer you to make films a certain way and to emphasis elements that other people maybe wouldn’t. Starting life as a painter I quickly realised that traditional fine art painting didn’t suit me and I began experimenting at university with making short films using an array of home-made models and prosthetics, all with a surreal macabre style. They were the very definition of ‘student films’ – very cheap and garish! The following video is the only thing that I made during that time that really remains in any finished form…

It was at this time that I first worked for a film production company doing concept art for a horror feature film. The film never came off in the end, as many don’t, but it really opened up the idea that working in films might really suit me. Up until this point I still imagined myself becoming a practicing fine artist. The combination of my interests in bizarre characters, fantasy landscapes and storytelling were a good fit for making narrative genre films, something that wasn’t fully available in paintings meant for an art gallery context. Once i started creating my own strange worlds and filling them living breathing monsters and creatures I knew I’d found my calling! It really came alive for me.

SB: Your first short FLESH ART is a stylish and brutal take on the zombie apocalypse. How did the concept first develop, and what were some of the biggest challenges you ran into when bringing the project together?

CG: As a team we wanted to make a zombie film but with something that gave it a bit of a different edge. I knew I wanted to make the central character something of a villain as I was tired of seeing good guys running desperately away from marauding undead and focused on what he would be about. I decided it might be interesting to see what a weird, deranged loner would do in the classic situation of a zombie apocalypse and run with that. Our main character then became a sick serial killer who takes advantage of all the living corpses to act out his perverse artistic desires. This allowed me as an artist to create images such as the ‘Flesh Art’ of the title made out of zombie body parts that might be a bit unexpected and fresh (so to speak…). It was really this ‘work of living art’ that most excited me and was most difficult to get right while shooting. As soon as you get to the point of having actors sticking their heads and arms through holes in the wall things get tricky! Managing that was the hardest bit and was left to the end of the 4 day shoot but in all honesty just working on a film set was a challenge. Coming from pre-production I wasn’t familiar with any on-set protocols and would ask the camera department to light areas before we had even lined up the camera! I now know the right way round to do things – I learnt a lot on that shoot!

SB: The most initially striking element of the short is the amazing production design. The combination of grittiness and flesh-based art is reminiscent of Robert Burns’ work in the original TEXAS CHAINSAW MASSACRE. How involved were you in the look of the set?

CG: I originally concept designed the whole thing back when we had no money for sets and I planned along with my team mates to knock up the set ourselves! If we hadn’t gotten the funding from the National Film School where we were studying it would have looked a very different film! But gratefully we did and utilised the skills of two production design students – Antonia Lowe and Patrick Harris who have since gone on to success. Once they were onboard they were able to expand the concept out from the simple basement setting I had started with to the massively more impressive underground dungeon that appears in the final film. Their work, along with cinematographer Ernesto Herrmann and colourist Belgin Kaplan really lifted the whole project to another level. My over riding brief was to give it a feel similar to the cannibal lair in Gary Sherman’s DEATH LINE – a set that is less known then Chainsaw but which I think is as atmospheric. 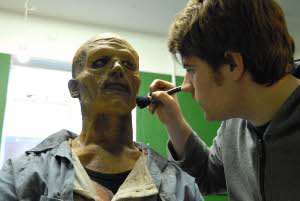 SB: FLESH ART is very much about the destructive qualities in art. In the short, the creation literally consumes the creator. As someone who has worked in a variety of artistic mediums – and now moving onto larger productions involving more participants – is this something you find yourself wary of?

CG: It’s a nice idea to paint yourself as a tortured artist who is constantly at the edge of self destruction but it’s not often that useful in reality! I would rather create fictional characters who create bizarre, terrifying art then actually have to do it myself. Everything I do is an illusion and I feel that fictional environments allow me to push boundaries much more interestingly then I could in real life. In a sense the hero of Flesh Art is the ultimate artist, one who works at the very edge of taste and decency – something that all art should aspire to! But being an artist and filmmaker is always something of a risk as it is known as not being the most financially secure of professions…

SB: Regular readers of my column know that I’m a rather rabid fan of BLOODY CUTS and the work they’ve been doing with their horror shorts. You’ve been working with them in the role of art director on some recent projects. How has the experience been so far, and what does your role entail?

CG: The experience has been great; it’s given me a chance to act as art director on short films which I have wanted to do for some time. The first project I worked on was a special thrill as it was directed by make-up legend Neil Gorton who I knew of from my time studying at the film school. My role is to take care of the overall look of the locations and sort out props and any additional set dressing. Anything that needs building custom that doesn’t fall into the area of prosthetics I also deal with. My main responsibility on MOTHER DIED was to kit out the kitchen of the suburban house to make it look like it has fended off a zombie invasion for many months. With SUCKABLOOD we had an amazing castle location and I had an interesting fairy tale attic bedroom to dress that I am quite proud of. The latest film is still top secret – hear more on that from the BLOODY CUTS website and facebook page!

SB: For those readers interested in following your current and future work, how can they keep track of you online?

CG: I have a website that you can check out: www.christophergoodman.com and my stuff is sometimes featured on the Bloody Cuts site….
http://www.bloodycuts.co.uk/films/flesh-art/  Eventually I shall set up a Facebook page but until then check out the above links…

SB: And, with that in mind, what Chris Goodman projects should readers be keeping their eyes out for in the future?

CG: I’m currently developing a short film with Bloody Cuts and plan to make it as one of the next in the series making it my first solo directing credit (FLESH ART was co-directed with my friend Nick Thompson). I’m excited to be in the director’s chair but also to have an opportunity to further collaborate with the Bloody Cuts gang who have talent and energy to spare!

CG: Check out my digital paintings on my website. I always try to keep working in a variety of different visual mediums to keep me fresh and on the ball. And feel free to send me an email if you have any queries.

SB: And finally, Chris, what advice would you have for young or developing film-makers who are looking to tackle their first project?

CG: For me, the National Film School was instrumental in getting my first film made – it is worth checking out even if you think you can’t afford it! I was not rich but managed to get funding to make it a viable option. Surrounding yourself with talented, positive people is always important also – it’s very hard to make films in a vacuum unless you’re a one man band animator or something!