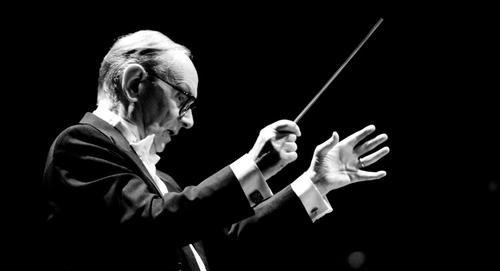 Ennio Morricone is the greatest living film composer.  He may even be the greatest film composer of all time.  “Greatest” and “of all time” are way too common occurrences on the internet, a hotbed of hyperbolic superlatives.  In this particular case, however, those are warranted.

Morricone has written hundreds of film scores across the span of his decades-long career — the exact number is difficult to pin down because for every other score he was credited for composing, there are those he ghost-wrote, gave credit to a mentee, or contributed to in some form.  Then there are the latter-day films which have used samples of his scores, let alone the countless cartoons and commercials.

Morricone has been most prolific in his native Italy, but he’s composed plenty of scores for American films, and for those scattered other nations as well. There isn’t a genre left untouched by the master, from “spaghetti” Westerns to historical epics to to monster movies to sweeping romances to action thrillers to gialli to screwball comedies and beyond.  Some personal selections for highlights:  THE GOOD THE BAD & THE UGLY, ONCE UPON A TIME IN THE WEST, THE BIG GUNDOWN, THE GREAT SILENCE, ORCA, WHITE DOG, and THE THING.

It’s probably no coincidence that his compositions energize so many of my favorite films, but I love his work so much I listen to it even if I haven’t seen the movies.  For example, I couldn’t tell you that much about the film it came from, but his score for THE MISSION is one of the great chill-out albums of all time.  If you’re stressed, it’s a cinch to relax you all the way out. Guaranteed. There we go with the extreme superlatives again.

Today, November 10th, is the birthday of the great Maestro. All of us here at Daily Grindhouse wish Ennio Morricone the happiest of birthdays, and thank him for making the world sound so much more beautiful.