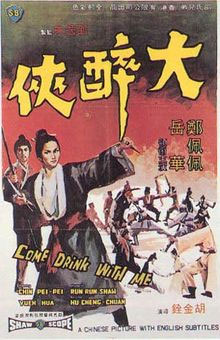 It’s difficult being the first. Being the one saddled with re-writing the rules. So often, groundbreaking artists are not recognized in their own time, or their work is roundly criticized for breaking the mold. Even if that work is accepted and assimilated into the culture, it then becomes endlessly imitated. Altered. Abused. With enough copies, the original work starts to be seen as derivative, or bland by comparison. It’s a sad position to be in, but the late director King Hu absolutely reveled in this originality. His work was unconventional – combining popular styles of Chinese martial arts cinema with stylistic elements from Western and Japanese films – but set the template for not only the kung-fu films of the 70s, but all of the martial arts films that were to follow. His second film (and first martial arts film) Come Drink With Me might very well be the most important kung-fu film ever made, as it finally gave the genre legitimacy in the eyes of the worldwide public.

Despite its reputation,  Come Drink With Me is far from being the first kung-fu film. Chinese martial arts films go as far back as 1905, with the most notable early success being 1928’s Huo Shao Hong Lian Si (Burning of the Red Lotus Monastery) (1928), which was released in 18 parts over three years (it was developed as a serial, making the final running time 27 hours!). Those films helped establish the wuxia (martial chivalry) genre, which usually included swordplay, fantasy elements and wirework. Also notable is that many of these films featured women as the leads, though sometimes playing male characters. These wuxia films were joined in the public consciousness by a popular series of films (loosely) based on real-life kung fu expert (and Chinese folk hero) Wong Fei-hung, produced throughout the 1950s and 60s, usually starring Kwan Tak-hing – who became so associated with the role that he would forever become known as “Master Wong.” These films were made quickly and featured a more traditionally realistic fighting style, and were so effective at embedding Fei-hung in the public consciousness that the “character” continues to appear in films to this day – though often in wildly divergent forms.

But King Hu had a different vision for his first kung-fu effort. Combining the fantastic elements of the wuxia films with the more realistic approach favored in the Wong Fei-hung films (along with elements of Japanese chambara – samurai “sword fighting”- films) he wanted to make a film with a bold visual richness that would reflect his own background in art and experience as a set designer. This precise approach to filling the frame would revolutionize what was possible in a kung-fu film, and inspire a generation of filmmakers no longer restrained by the more traditional filmmaking approach. Hu  also had significant experience as an actor throughout the 1950s and 60s, and knew that in order to find success with such visually striking material, that he would require an actress who could match the passion and romanticism of his script, while still being able to dish out some believable ass-kicking. His discovery of the young ballet dancer Cheng Pei-pei kicked off a fruitful collaboration that would be unfortunately cut short by Hu’s sudden leaving of the Shaw Brothers studio (where Pei-pei was contracted) to make films in Taiwan.

In the film – developed by Hu but incorporating influences from Chinese opera – Pei-pei plays Golden Swallow, tasked with rescuing her brother from a gang of bandits who hope to trade his life for that of their arrested leader. At first mistaken for a boy – though mistaking the lovely Pei-pei for a male is even more unlikely than the similar confusion with Zhang Ziyi in Crouching Tiger, Hidden Dragon – Swallow makes short work of the brutally violent bandits in the local inn (King Hu would regularly set scenes in an Inn, a tradition which would influence nearly every martial arts film that followed). After avoiding a kidnapping attempt, thanks to the sly protection of drunken beggar Fan Tai-pei (Drunken Cat), Swallow attempts to confront the gang at the Buddhist Monastery they have taken over, but is punctured by a poison dart that comes very close to killing her.

Nursed back to health by Fan Tai-pei (played by Yueh Hua, acting much older than his 23 years), Golden Swallow discovers the Drunken Cat is actually a Drunken master, and has taken ownership of his own master’s bamboo staff after his tragic betrayal at the hands of  Liao Kung, who is now the abbot of the monastery.  Tai-pei and Golden Swallow organize a prisoner exchange with the bandits, but the trade is actually a trick to retrieve Swallow’s brother, leading to a massive confrontation between the bandits and Swallow’s band of female warriors. This bit of business out of the way, Liao Kung and Fan Tai-pei have a final, violent confrontation.

Many elements of this plot have become almost cliche thanks to the films that have been released since – the confrontation in an inn, the corrupt Shaolin monk, the drunken master, the seemingly superhuman power allowed by a mastery of kung-fu – but this is where many of them actually began, and certainly where most gained significant prominence. While not all martial arts films would imitate the artistic flourishes and visual stylings created here – for instance, the Bruce Lee films that would follow would be much more interested in presenting a realistic and hard-hitting fighting style – these stereotypical elements would still creep into nearly all martial arts features that would follow. Of course, some would pay tribute to Come Drink With Me more directly. Not only did it get the requisite sequel (Golden Swallow (1968), sadly not directed by King Hu), but also was referenced extensively in Ang Lee’s celebrated Crouching Tiger, Hidden Dragon (2000), which included Cheng Pei-pei in a significant role.

However, it’s understandable if you leave a viewing of Come Drink With Me wondering what all the fuss is about. It doesn’t have the biggest or most impressive fights (though it’s surprisingly brutal, and features some beautiful, fluid swordplay), and the story loses some steam in the final 1/3. Much of the impact has also been dulled by decades of imitation and tribute. But it remains a fascinating and gorgeous work, filled with impressive camerawork and a level of detail that remains unmatched. King Hu would make other significant films – most notably Dragon Gate Inn (1968) and A Touch Of Zen (1971) – but would never capture the imagination of the people, and other directors, quite so completely again. Hu would pass away prematurely in 1997 at the age of 64, but his groundbreaking work has guaranteed immortality. Sometimes being the first has its advantages.