moe vs. nero in an epic battle of white-fu! 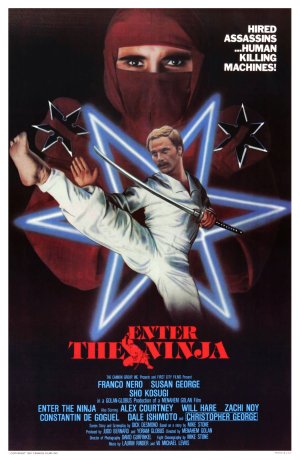 America has a love affair with the ninja. As far back as I can remember there have been ninja movies. Usually the variety where a white dude masters Ninjitsu over his Asian counterpart and usually to the chagrin of said Asian. I always got a kick out of the idea of a white-boy martial artist. Whether it’s Dudikoff in the AMERICAN NINJA movies to Robert Wall in ENTER THE DRAGON to Franco Nero in ENTER THE NINJA. Who doesn’t love a goddamn ninja? They sneak around killing shit in badass black pajamas. They get to use awesome weapons like throwing stars and nunchucks. They are the thing of childhood fantasy. 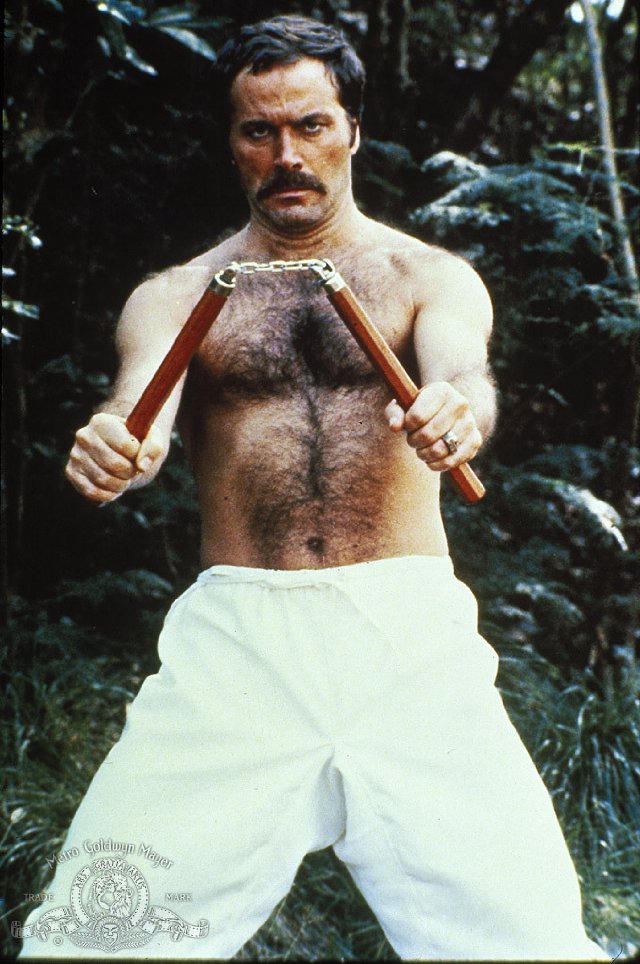 Enter the ninja is particularly badass because it stars Franco Nero, a man so masculine that his chest hair has a mustache. Nero is a staple of exploitation cinema, likely best known for his work as DJANGO. He’s never stopped working though, fuck he was even a voice in Cars 2. In ENTER THE NINJA he plays Cole, a Vietnam War vet studying the way of the ninja in Japan. Hasegawa, played by Sho Kosugi, is the typical angry ninja. Tired of being shown up by whitey, he refuses to toast Cole when he gets the go ahead to call himself a real ninja! More on Hasegawa later though.

ENTER THE NINJA is really a film broken up into three parts. The first is short and just shows Cole becoming a ninja. It features a lot of cool ninja moves and a DECAPITATION!!!! The second part is where everything starts to get interesting. Cole is sent a telegraph by his old war chum Frank. Cole then uses his extra sensory ninja perception (ESNP) to learn that a local crime boss is giving Frank shit about selling his valuable land. Frank looks just like James Caan, you’d think no one would be stupid enough to fuck with Sonny Corleone but hey, even HE got offed. One impromptu Cockfight later and Cole is ready to help his old friend out and help his friend’s wife out of her panties.

The big boss baddie is some nouveau riche Guido with a swimming pool in his office. His henchman is a short, fat German with a hook hand. Hook is not allowed to speak with the big boss directly. This is constantly forgotten and Hookie gets slapped around quite a bit. The Hook has several run-ins with Cole and has his ass (and eventually his hook) handed to him. Big “The Situation” Baddie figures his best bet is to fight ninja with ninja and sends his man to Japan to find a real live ninja! Remember Hasegawa? Yeah, well guess who gets hired to take Cole out. Hasegawa dispatches Frank ruthlessly and without hesitation and kidnaps Maryanne as bait for Cole. This brings us to part three of the film…Ninja Vs. Ninja! 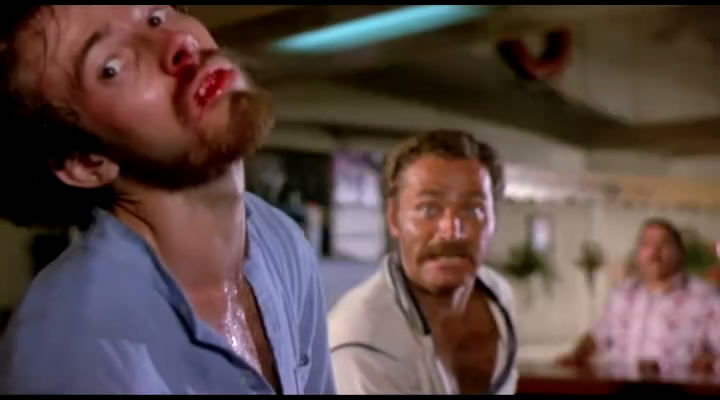 I wonder if in Nero’s contract it specified that he had to be a total badass in ENTER THE NINJA. I ask because Cole takes out dozens of guards, kills a guy with blow darts, sets off dozens of smoke bombs, and uses every badass weapon in a ninja’s arsenal! He single handedly infiltrates the big boss’s heavily guarded building and KILLS EVERYONE. The baddie even has the brilliant line of “you didn’t have to kill my guards, you could have called up and we’d let you right in.” Cole literally kills everyone in the building, now that is some serious ninja-ing! The final ninja on ninja battle is worth the wait and Sho puts on a hell of a show!

This is part one in the “Ninja Trilogy”, three movies with nothing in common expect they all have Sho Kosugi in them, not even as the same character! The next film in the series is Revenge of the Ninja.

Nero kills everything, including IT

5 MOTHERFUCKING NINJAS out of 5