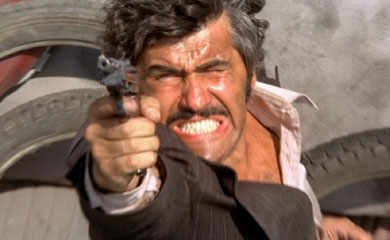 I don’t know if it’s the cooler weather, the urge to blast away annoying holiday shoppers, or a desire to counterbalance against all the good will and cheer with a heavy dose of soul crushing violence. But this time of year, I always find myself leaning on Poliziotteschi films to boost my holiday mood. That’s Eurocrime to you, bud and bud-ette.

So, while I was hunting down new titles to watch, I found a few steals you might like to stuff in your own stocking or give as a gift. Check ‘em out…

Raro Video has done a fine job bringing Fernando Di Leo’s Italian crime capers to Blu-ray. In Volume 1, you get Eurocrime essentials including CALIBER 9, THE ITALIAN CONNECTION, THE BOSS, and RULERS OF THE CITY. All classics, all loaded with gritty gang violence and sleaze. Some of the best Eurocrime movies ever. And now, all 4 Blu-rays are $25.99. Click the pic to get it…

Oh, this is a goodie. GANG WAR IN MILAN was directed by everyone’s favorite extreme horror director, Umberto Lenzi. Yes, the man best known for NIGHTMARE CITY actually directed 10 Eurocrime flicks. And, they are all lean, mean, and extreme. GANG WAR IN MILAN is a gem with Antonio Sabato playing a pimp who has to fend off a French heroin dealer from beating up his ladies and taking over his track. Just $12.61 for the Blu-ray at the moment.

Two words: Tomas Milian. The man lights up the screen. In YOUNG, VIOLENT & DANGEROUS he plays the local police commissioner out to catch a trio of hell-raising thugs. It’s a thrill ride chock full of blood and bad muthas.

LIVE LIKE A COP, DIE LIKE A MAN is one of the most violent and unconventional Italian style detective films of its time. It was written by Fernando Di Leo, whom we’ve already discussed. But, get this…it was directed by Ruggero “Cannibal Holocaust” Deodato. It’s about two anti-crime squad cops that don’t follow the rules and don’t hesitate to brutally kill criminals. The most insane part? The DVD is available now for a ridiculous $6.49.

Umberto Lenzi is back. And, this might be his greatest crime masterpiece, thanks in no small part to madman Tomas Milian. Truly a movie that needs to be seen to be believed. Milan goes beyond beserk and Henry Silva is having none of it. Problem is, the American DVD seems to be out of print. It’s going for $40. But, Shameless has put out the UK Blu-Ray, which you can grab for $31.95. Essential viewing.

8. Eurocrime! The Italian Cop and Gangster Films That Ruled the 70s

Whether you’re new to Eurocrime or simply love it, do yourself a favor and check out this definitive rundown on the topic. Mike Malloy’s documentary covers all the bases, shares the most important titles, and features interviews with the madmen who made these movies famous. It’s a fascinating glimpse into a filmic fever that’s still reverberating today. You can read Doug Tilley’s take on it here. Or pick up the DVD now for $19.95.

* If we’ve turned you on to some cool movies here, please purchase them through these links. DailyGrindhouse will receive a small commission, which helps us to keep publishing great content.