Home  ⁄  The Wire  ⁄  Exit Music For A Horror Film: The Scariest Pop Songs To End A Movie

Usually punctuated with a big scream, a big scare, a memorable line, or even a good laugh there’s been a long tradition of memorable end credit songs in horror films. It can give the audience a sense of closure, or give one last jolt before you and your date exit the theater into the dark night. To close out Daily Grindhouse’s Rocktoberfest, Kevin Maher and Mike Vanderbilt rundown their favorite uses of this device… 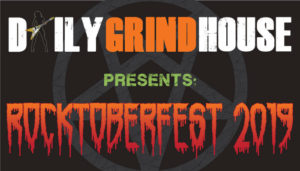 AN AMERICAN WEREWOLF IN LONDON (1981)

“Blue Moon” by The Marcels

John Landis’ horror-comedy is populated with moon-themed music (Van Morrison’s “Moondance”, CCR’s “Bad Moon Rising”) but the lunar tune that stands out in my memory is “Blue Moon”. Sam Cooke’s crooner-ballad is played over a graphic transformation. The peerless vocals carry you along while David Kessler falls to his knees, sprouting fangs and body hair. The familiar song makes the fantastic scene more grounded, more realistic. But the real kicker comes in the film’s final moments (spoiler for a 38-year-old movie) — we end on this tragic tableau: a woman crying over the naked, bloodied, bullet-ridden corpse of the man she loves. The image cuts to black and after a fraction of a potent silence, we’re punched in the ear with “Bomba badom, ba bom ba bom, etc” The Marcels fill the dead air with their bouncy, innocent, doo-wop nonsense, making the whole thing sound very American. The werewolf tragedy is made that much more absurd with this ironic stinger — and it really does sting! [Kevin Maher]

“It’s My Party” by Lesley Gore

Anthony Hickox’s WAXWORK takes a tried and true horror movie formula—terror in a wax museum—and injects it with a very hip, very ‘80s sensibility. Deftly blending gore, scares, and comedy, WAXWORK is also a love letter to the classic movie monsters that Hickox and his contemporaries grew up on in the ’60s, from the gothic horror of Hammer productions, the bleak NIGHT OF THE LIVING DEAD. As our heroes emerge triumphant, laying waste to the museum and the evil within, a severed hand escapes into the night, setting the stage for 1992’s WAXWORK II: LOST IN TIME ( an at times inspired follow up that suffers from a dearth of Deborah Foreman). As the credits begin to roll, Lesley Gore’s 1963 tune “It’s My Party”—the first hit single for producer Quincy Jones—offering one more throwback to the swinging  ‘60s. [Mike Vanderbilt]

“Mr. Sandman” by The Chordettes

There are actually a few things I enjoy about HALLOWEEN II. I dig how aesthetically it retains the look and feel of the original, and that the script from John Carpenter and Debra Hill is reverent of the original film’s characters (except for that whole sister thing) and Alan Howarth’s amplified rendition of the HALLOWEEN theme is an all-timer. Unfortunately as a whole, the film is a slog opting to lean into the post-HALLOWEEN slasher tropes featured in so many knockoffs that populated multiplexes in the wake of the original film’s success. The film’s final moments with Laurie Strode silently riding in the back of ambulance into the foggy November 1st morning, The Shape lies burning in the hospital. The Chordette’s sunny #1 hit “Mr. Sandman” plays, doubling down on the notion of the evil that lurks beneath suburban America. It provides a sardonic denouement to the night he came home and arguably would have been a much better way to end the Myers saga…four decades earlier. [Mike Vanderbilt]

In Sam Raimi’s first EVIL DEAD film the gory, no-one-left-alive bloodbath comes to an abrupt close — and is followed by a jaunty 1920’s ditty. POW! Like a lot of the best moments in THE EVIL DEAD, you don’t see this one coming. Coincidentally, this same jazz song is heard on Upston Pratt’s jukebox in the original CREEPSHOW (1982) and the cartoon show REN & STIMPY. [Kevin Maher]

“Did You Ever Seen A Dream Walking?”

Building off of what Rick Rosenthal did with “Mr. Sandman” with HALLOWEEN II, A NIGHTMARE ON ELM STREET, 2: FREDDY’S REVENGE gives he audience one more good scare as Freddy’s glove bursts out of Sydney Walsh’s chest and Freddy drives the bus out into the desert. As the film fades to black, Bing Crosby begins to croon “Did You Ever Seen A Dream Walking?” offering up a darkly comic joke riffing on the Der Bingle’s classic tune. Traditionally, the ELM STREET films end with a modern rock or pop tune, so the use of a Bing Crosby tune over the end credits is just one more thing that makes FREDDY’S REVENGE stand out as the weirdest entry in the series. [Mike Vanderbilt]

Tom Holland told The A.V. Club in 2015 that he didn’t know that “you’re so cool Brewster” would become an iconic line. “What happened was, I looked at the film when I put it together and it needed a button on it,” Holland explained. “Stephen Geoffreys’ reading is so good, but that was the line that sort of stuck out when I listened to it.” From there, J. Geils Band’s “Fright Night” takes over, closing out the film with that hip, rock ‘n’ roll edge that made it a sleeper hit in the summer of 1985. [Mike Vanderbilt]

“Bad To The Bone” by George Thoroughgood & The Destroyers

CHRISTINE opens with a historical inaccuracy: The first scene shows an assembly line in the year 1957, but the music is in the scene is from 1982. It’s “Bad to the Bone” by George Thorogood & The Destroyers. It might not establish the time-frame, but this bad-ass anthem tells you everything you need to know about the nature of the automobile. (Thorogood’s track would be used in countless films like PROBLEM CHILD, TERMINATOR 2: JUDGMENT DAY and BEVERLY HILLS CHIUAHUA, the only rock song that’s more over-used in film is “Born To Be Wild.”) CHRISTINE ends that classic horror movie ending – “the monster isn’t REALLY dead!” then cuts to black as we hear that sinister riff played one more time. – KM

NOTE: Christine’s use of BAD TO THE BONE echoes the film BLUE COLLAR (1978), which also opens on an automobile assembly line. The film uses Captain Beefheart’s HARD WORKIN’ MAN, where the same blues riff is combined with the sounds of industrial machinery. [Kevin Maher]

“People Are Strange” covered by Echo & The Bunnymen

“One thing about living in Santa Carla I never could stomach: all the damn vampires,” wraps up Joel Schumacher’s THE LOST BOYS with a whimsical wink before giving way to Echo & The Bunnymen’s take on The Door’s “People Are Strange.” While FRIGHT NIGHT remains my favorite ‘80s vampire flick, Grandpa’s line remains one of the best closers of all time. According to Paul Davis’ Lost In The Shadows: The Story Of The Lost Boys, the original script featured a post-credits stinger that showed head vampire Max prowling the boardwalk in 1900, but thankfully Schumacher gave Grandpa the last laugh. [Mike Vanderbilt]

“Pet Sematary” by The Ramones

By 1989, this closing-credit gimmick had become a little played-out. But director Mary Lambert makes it work. She brings so much to the table in PET SEMATARY, including her professional ties to one of Stephen King’s favorite bands. Lambert is the one who convinced The Ramones to write and record the title track for the film. (Dee Dee Ramone wrote the song in Stephen King’s basement!) In the final scene when Louis embraces his decomposing, undead wife, she grabs a kitchen knife and the scene cuts to black. We hear the doomed husband’s final scream, followed by the opening chords from Johnny’s guitar. [Kevin Maher]