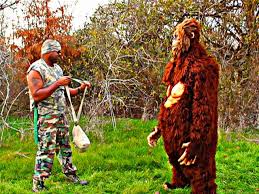 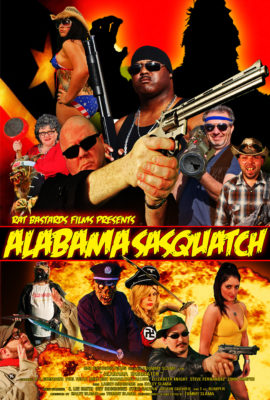 I have been making a concerted effort to include some more recent exploitation fare in this column. In pursuit of that plan, I sat down to watch ALABAMA SASQUATCH. The DVD cover features artwork of a vicious Bigfoot ripping the guts out of a Boy Scout. Not surprisingly, the film does not live up to the promise of that wonderful cover, but it does find a strange, hyperactive tone that does not exactly add up to any real coherent story, but never allows boredom to become a concern—which should be the number one priority for an exploitation film. 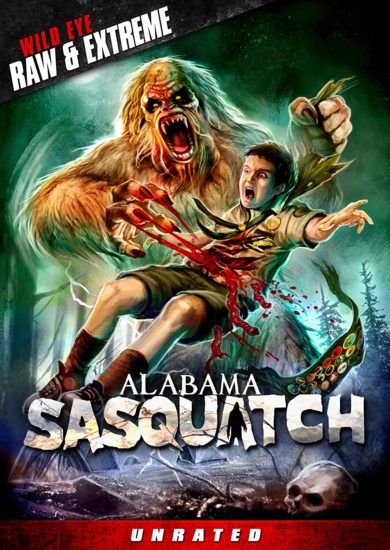 The plot of the film is really not that essential to enjoying it, but I’ll give a shot at distilling its rambling twists and turns into something resembling an understandable set up.

Junebug (A.J. Germaine), Jimby (Phillip Tolle), and Old Man Bundick (Michael Cox) are Vietnam Veterans who have settled back in their hometown of Normal, TX (population: 420…of course). After Junebug is robbed of a bag of weed dubbed “Alabama Sasquatch skunk ape special” by a clan of cannibalistic rednecks, he goes on a warpath that sweeps up Jimby, Old Man Bundick, the good sasquatch who hangs around the area, the bad sasquatch who also hangs around the area, two off-brand boy scouts, a couple of Nazis (original German recipe, not the shameful new American version), and numerous bit players wearing dollar store wigs and fake “hillbilly” teeth into the wake of his destruction.

But ALABAMA SASQUATCH is not even close to the linear film I just described. If you dig beneath the gratuitous unmotivated nudity, Bigfoot boners (complete with ejaculation that looks like toothpaste shooting out of a caulking gun), fart jokes, flashbacks-within-flashbacks-within-flashbacks, gun play, and truly offensive (at times) racial humor, writer/director Tommy Slama has used the fairly straight forward plot of troubled war veterans cleaning up their hometown. Hell, that plot line is practically a tradition in exploitation films, so it is probably for the best that Slama only returns to it every now and then. If he had tried to go too traditional, the film would have been clichéd and dull. By trying to out-Troma Troma films, Slama ends up putting together something that feels like RUSHMORE‘s Max Fischer tried to adapt his Vietnam War play for the big screen but got pushed aside by Beavis and Butthead acting as meddling producers.

I suppose it is saying something that the best joke in the movie is that the film is called ALABAMA SASQUATCH, yet it takes place entirely in Texas. Aside from that obvious, yet still slightly inspired gag, there are good bits about Jimby’s gigs as a drunken tabloid news show host who does Shakespeare on the side, Helga the Nazi (Sarah Kate Allsup) going undercover as a high school student, and the confused parentage of Jimby’s adult Asian son. While my laughs were spread out over ten to fifteen minute intervals, that honestly is not a bad track record for a film made this cheaply with an amateur cast pitching their performances someone beyond the back of the theater to a star between Jupiter and Saturn.

If it sounds like I am giving the film a lot of backhanded compliments, it is because, even though I found several laughs in ALABAMA SASQUATCH, when it does not work, it falls very, very, very flat. Some of the gags about Junebug being the only African-American in town and Jimby’s Vietnamese son cross the line from good-natured poking fun at rural American’s insular attitudes to cringe-worthy racist beliefs on the parts of some characters. This film is just overall too silly to handle such tonal shifts. The same goes for some homophobic slurs tossed about by the “good sasquatch.” Maybe I’m being too sensitive, but most of the rest of the film is not really going for transgressive humor or social satire. The occasionally too casual use of slurs simply feels like an attempt simply to shock when the film is largely a lark that doesn’t need to court controversy. 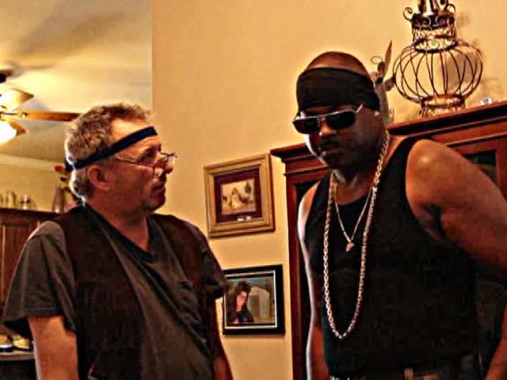 Looking like it was shot on prosumer cameras and given saturated colors in post-production, Slama piles on semi-experimental flash forwards, quick edit montages, and a nearly nonstop Southern rock and rap soundtrack to give the film a slightly psychedelic feel. This hyper style grows wearisome after a while, which might explain why some of the best comedic moments come from relatively quiet scenes like an intervention that goes off the rails and Helga awkwardly trying to seduce one of the students she meets while undercover. I can see that Slama is trying to give an “anything goes” look and feel to the film, but some of his scripted gags actually work best when the actors are left to play out the absurdity with a straight face.

Despite my numerous misgivings, I did have enough fun with ALABAMA SASQUATCH to find it worthwhile viewing. I love that there are still these ultra-cheap regional flicks being made out there. It is juvenile as hell and largely stupid, but it tries so hard to entertain that it finally won me over. I’ll never claim it is a good movie, but it lands on the fun side of the line between grotesque entertainment and bad camp. 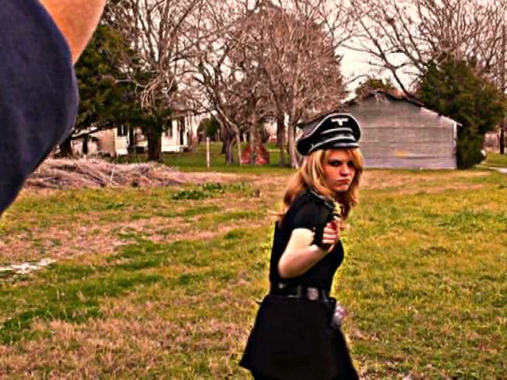