Stephen King is the most influential voice in horror of the late 20th century. His books have been best sellers since his debut and have gone on to spawn numerous adaptations in film, TV, video games, and other media. King Of All Media looks at those adaptations, starting with his TV miniseries in chronological order. Each week Alejandra Gonzalez and Rob Dean will discuss a new miniseries project of King’s, with today’s installment being on 2009’s CHILDREN OF THE CORN, directed by Donald Borchers.

Rob Dean: For a long time in horror, there was a steady current of films and books that centered around killer kids. From THE BAD SEED to THE GOOD SON, celebrating a BLOODY BIRTHDAY or asking WHO CAN KILL A CHILD?, these murderous moppets would commit heinous acts while brandishing angelic faces. The subgenre seems to have died out a bit (possibly due to the rise of real life violence committed by youth?), but not before our beloved Stephen King added his own take on it. He’s featured terrifying tykes in SALEM’S LOT and PET SEMATARY, but his most chilling depiction of evil children came in his 1977 short story, “Children Of The Corn.” That short was later adapted into a movie in 1984, which was seen as the least faithful adaptation of a King work for many years (then THE LAWNMOWER MAN and other movies came along). But the producer of 1984’s CHILDREN OF THE CORN, Donald Borchers, wrote and directed a new version that was shown on SyFy on September 26, 2009.

This version is much closer to the story, with a few deviations here and there. In 1975, unhappily married couple Burt (David Anders) and Vicky (Kandyse McClure) are driving on the back roads of Nebraska on the way to California. They (literally) run into a child who comes sprinting out of the corn stalks, but soon discover that the child already had his throat slit before Burt hit him with the car. Seeking help, the couple goes to the closest town of Gatlin, which they find creepily abandoned with only the church showing any signs of present use. It soon becomes apparent that the children of the town have murdered their parents to appease an Old-Testament God they refer to as “He Who Walks Behind The Rows.” Can the constantly bickering duo escape the clutches of the creepy kid cult?

1984’s CHILDREN OF THE CORN may not be faithful to the King story, but is still very engaging and has some iconic moments and characters. Hell, they’re still making sequels to this day, with the ninth installment (CHILDREN OF THE CORN: RUNAWAY) having come out earlier this year. Borchers’ film has some good moments of its own, mostly due to Anders’ performance and the willingness to get mean with the subject matter. It really excels at costume design and set design, of all things, and there are multiple moments that surprise me (for good and ill — which we shall get to). It’s luckily only 92 minutes long, so it’s not that much of a commitment, and I’d say it’s worth checking out, for the most part. 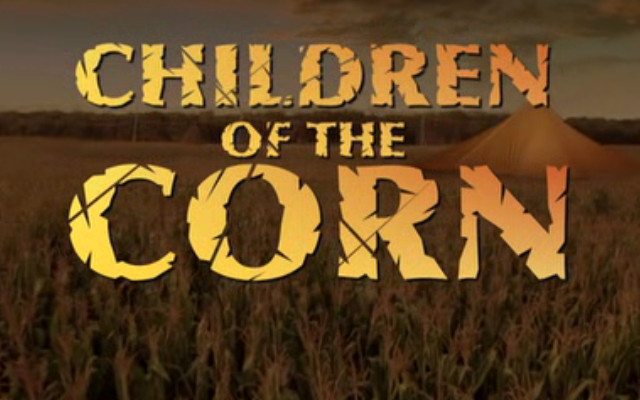 Ale — what did you think of 2009’s CHILDREN OF THE CORN? Why do so many King stories center on unhappy marriages with couples that basically hate each other? What stood out to you?

Alejandra Gonzalez:  I thought CHILDREN OF THE CORN (2009) was absolutely fine. I don’t know that I would ever watch it again, but it was entertaining enough and there were some pretty solid spooks throughout. Then again, anything concerning killer children really gets to me! Because I never read the source material, I can’t really compare it that way but I thought that on its own, it worked pretty well. There was never really a slow moment, which could be due to the short 90-minute run time, but I think it deserves credit for remaining entertaining throughout. Despite how totally fine the miniseries is, I still can’t say that it’s something I liked, or would even recommend. After the series was over, I sat with myself thinking about why exactly I couldn’t connect to this at all and attributed it to the acting. I almost can’t say that a single person in this performed convincingly. I can’t say I’m really disappointed, though, because I knew that obviously many of the actors would be children, and I find that solid child actors are hard to come by.

What did disappoint me was the bickering couple. As you mentioned, we do come across unhappy marriages quite often in King’s work. Hell, we saw it just last time with one of the episodes in NIGHTMARES & DREAMSCAPES. You and I talk about it offline quite often, but we see other relationship dynamics repeated quite often as well – crazy and overbearing mothers, for instance. I’m not sure why King does this so often. Maybe he finds these dynamics interesting enough, and who could blame him? They work most of the time. There is always the possibility that he uses these character dynamics as a means of catharsis, which would be interesting too. Anyway, in regards to the bickering couple in CHILDREN OF THE CORN (2009), their complete disdain for each other was so exaggerated that it becomes unbelievable. I mean, I believe couples who can’t stand each other, but I don’t believe couples who are this mean to each other would be on a second honeymoon. 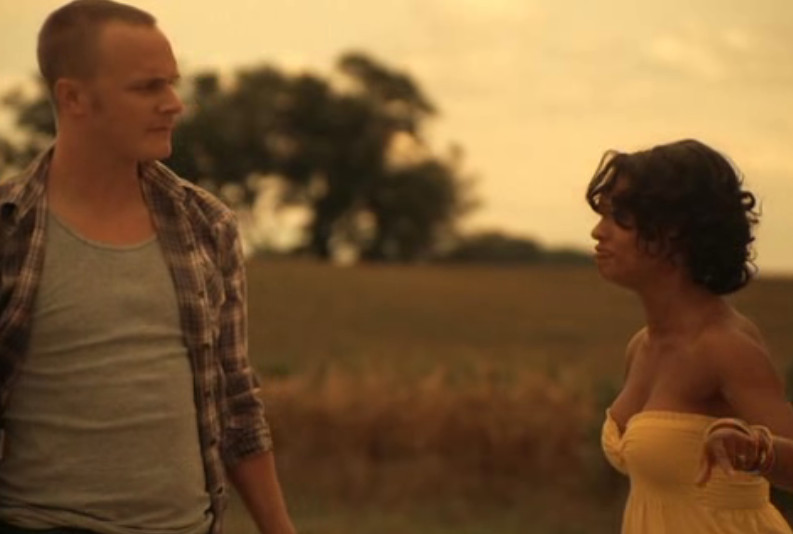 Also, at no point do I really care about what tragedy is about to happen to the couple. Vicky (played by Kandyse McClure) is insufferable. The worst part is that she doesn’t even play “insufferable” well, so when she finally dies I’m just relieved I don’t have to listen to her yell and complain anymore. Is that horrible?! I also didn’t care about Burt (David Anders), and while I didn’t actively dislike him, I thought it was weird that he didn’t hear the children completely dismantling his car but heard a gunshot…makes me wonder if he wanted Vicky to die. What is the truth, Burt? What do you think Rob? What specific scenes did you think were well done and which could you have done without?

Rob Dean:  I think the “second honeymoon” is sarcastic code for “desperate final attempt to salvage a disastrous marriage.” The two clearly do not like each other at all, though Vicky is certainly more aggressive in her needling than Burt. Based on what can be seen about their long lasting marriage, I’m guessing Stephen and Tabitha King are a perfectly happy couple with their normal share of disagreements—so I don’t think this recurring theme of hateful couples is drawing from real life, but instead may be a cathartic way, as you suggested, for him to vent his feelings sometimes. I also think that part of it is keeping with his EC Comics’ education and putting people the audience doesn’t like in terrible situations so they can get some glee from their torture and punishment. But ultimately that tactic wears thin and I don’t think is ever as effective as folks bank on it being.

Like I said, set design and costume design are really well done in this TV movie. Anders does a fine job as the put upon Burt with his various Vietnam flashbacks. When Burt discovers the Children have killed Vicky, and begins fighting a couple of them, I really wanted this to turn into FIRST BLOOD but with Anders hunting down and dispatching creepy Amish kids. He kind of does that a bit, but it would have been great to see him go full on John Rambo in the cornfields. The other scene that sticks out and actually did give me the creeps is the sex scene between two teenagers. The lead child, Isaac, beckons the children to be fruitful and multiply, like in the Good Book, and the audience has seen pregnant girls and some kids that were too young to have been around when the kids slaughtered their parents 12 years ago — so viewers get a sense that procreation is afoot amongst the cornfolk. But then this scene happens — clearly only for the home video audience, as it includes male and female nudity and more moaning than basic cable tends to allow — and it’s like something from Larry Clark suddenly spliced into the movie. What makes it truly unsettling for me is that the pair procreate in front of a small audience of young boys, who were clearly directed to be enthusiastic about what they’re watching. Well, one of those young boys is literally bouncing up and down because he’s so happy watching this duo screw, and it’s just a really awkward juxtaposition. The scene is not necessary for the film, it doesn’t underscore much that audiences already didn’t know, but it is the piece that has the most disturbing elements combining. 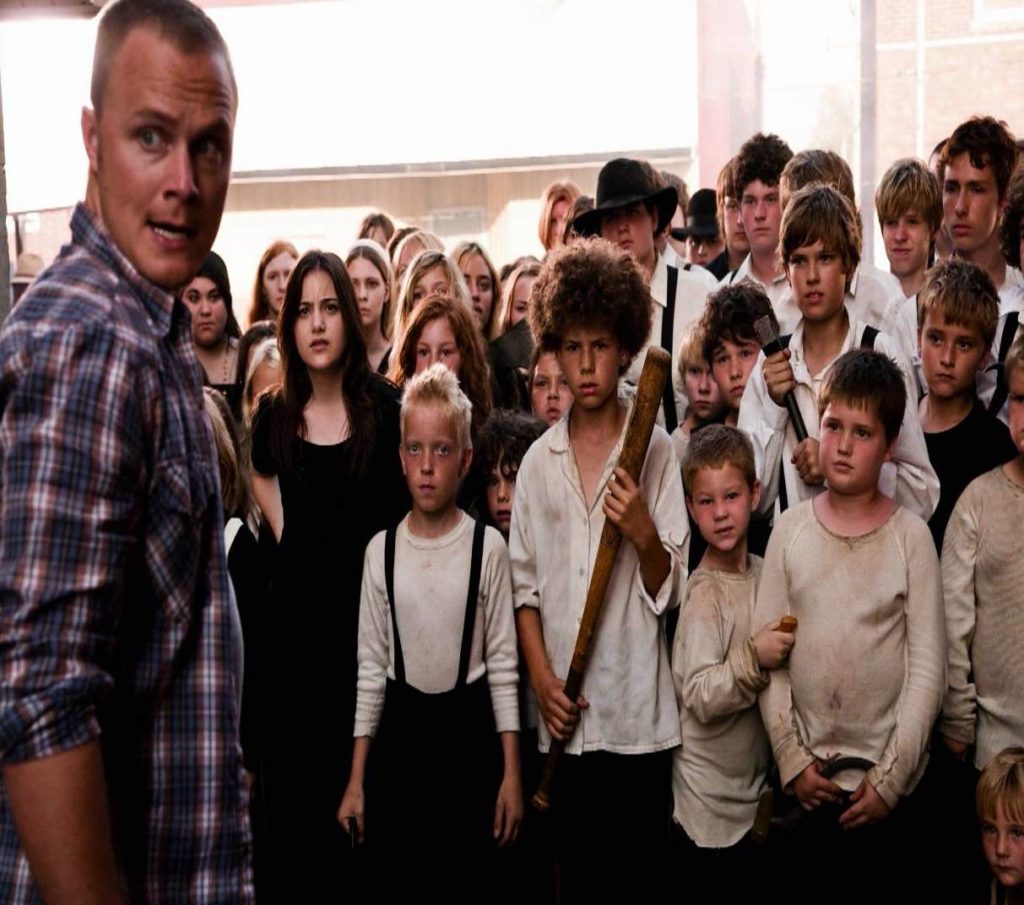 Another thing I was thinking of is that the story and subsequent adaptations (can’t speak to the sequels) are really an Americanized version of THE WICKER MAN. Pastoral religion with bloody consequences ensnares an outsider; but in that 1973 film it’s Christianity versus paganism, while in CHILDREN OF THE CORN, it’s Old-Testament Christianity vs. secularism. What do you think about those parallels? What is it about these ancient religions bubbling back up that frighten us so? CHILDREN OF THE CORN (2009) ends much more ambiguously than the big reveal in the 1984 version and on a much darker note. What did you think of how it wrapped up?

Alejandra Gonzalez:  That’s a good parallel! I think what frightens people about old religions such as the ones found in THE WICKER MAN and CHILDREN OF THE CORN is all rooted in the rituals that may be considered strange, and even savage to those who don’t understand. The most unsettling stuff in those films happens when followers of the religion are actively practicing it. For example, the “fertilization” scene you said creeped you out the most, however exaggerated, is something that was actually practiced. I don’t know about Christianity for sure, but fertilization rituals were in some pagan cultures, and a more modern person could potentially find practices like that unethical. I would say this expresses a fear that there could very well be people around who still uphold these beliefs that may threaten our more present-day ones.

As far as the wrap up goes, I thought it was… fine. I know I keep saying that, but I don’t know that there’s another word to describe this other than absolutely lukewarm. I never finished the 1984 CHILDREN OF THE CORN, and I never read the source material, so finding out that there is actually something who walks behind the rows felt a little anti-climactic to me. I wish the children were actually batshit insane, and I guess they are, but this means that there is something actually speaking to Isaac. Which, I guess makes the most sense thematically. It’s fine, and maybe it’s more developed in the source material. I will say, this definitely motivated me to finally finish CHILDREN OF THE CORN from 1984. I definitely didn’t hate CHILDREN OF THE CORN and it would rank somewhere along the middle in this journey you and I have taken that is soon coming to its completion! Next time, we’re covering 2011’s BAG OF BONES!