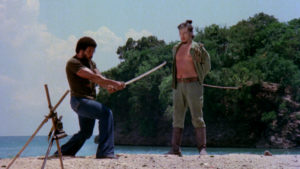 DEATH FORCE (a.k.a. BLACK SAMOURAI and FIGHTING MAD) is one of those movies I call a fascinating mess. It has a straightforward betrayal and revenge premise that provides the spine for a potentially entertaining exploitation action flick. For the most part, it is that entertaining action movie, but director Cirio H. Santiago (the prolific Filipino director behind the pretty good previous My Exploitation Education entry THE MUTHERS) also turns the film into a sort of efficient epic. While the actual run time clocks in at 110 minutes, it packs in so many character arcs, plot twists, and tonal shifts that it feels closer to an old Hollywood epic with all the ground it covers.

Doug (James Iglehart), Morelli (Carmen Argenziano), and McGee (Leon Isaac) are American soldiers returning home from the war in Vietnam. Not exactly squeaky clean guys, they managed to get their hands on several bars of gold before they left the country. At a stop over in Manila, they sell the gold below market value to a Chinese gangster and intend to start their lives over in America as rich men. But Morelli and McGee have plans to invest their share in building a criminal empire while Doug wants to go straight and simply return to his wife and child. Clearly, Doug should be watching his back. Sure enough, his partners stab him, slit his throat, dump him from their boat in the South Pacific, and head back to America with a two-way split of the money. 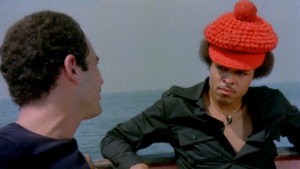 DEATH FORCE then quickly jumps genres as Doug washes up on the beach of a remote island. There, two old Japanese soldiers (Jose Mari Avellana, Joonie Gamboa) stranded on the island since World War II, discover him. Doug is clinging to life and the soldiers nurse him back to health. When he is at full strength again, they teach him the ways of the Samurai, turning him into a warrior with the skills to get revenge on Morelli and McGee, if only he could get off the island. 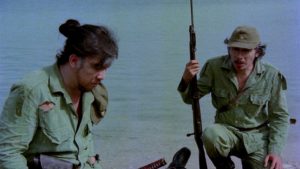 Meanwhile, Morelli and McGee are in a straight-up violent gangster movie as they use murder, arson, and the money from the sale of the gold to set themselves up as the new bosses of the criminal underworld in Los Angeles. While Morelli styles himself as an Italian mafia boss type by buying an Italian restaurant and doing business from behind a plate of pasta, McGee perversely sets his sights on seducing Maria (Jayne Kennedy), Doug’s grieving widow.

When the opportunity comes for Doug to get off the island, the stage is set for the two stories to collide with violent ramifications. Those expected violent results do happen, but Santiago serves them up with a heavy dose of melodrama and unexpected tragedy. While the film does earn not all of those melodramatic notes and tragic turns, they do give an unexpectedly weird vibe to a movie that is nowhere as modest in its ambitions as it initially appears. 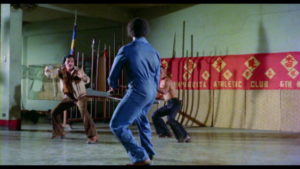 The first half of the film detailing Doug’s training on the island, while cutting back to what is happening in Los Angeles every other scene is the best part of DEATH FORCE. While the editing between the two stories is choppy, Santiago’s complete disregard for even trying to smoothly transition from one scene to the next does free him up to jam in as much information as possible. Considering how the film is filled to the brim with various characters and their side stories (even Morelli’s main henchman gets a subplot about his dysfunctional relationship with Maria’s best friend), this blunt method of throwing plot and character details at the audience with wild abandon proves surprisingly effective. 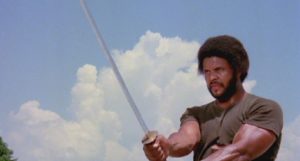 Even with as much as it feels like Santiago has the film on fast-forward during the first hour, Doug’s time on the island as he goes through his training is an actual, honest-to-the movie gods piece of character building. This section of the film also provides several hints to the tragic turns coming in the third act as Doug’s mentors warn him of the dangers of using his abilities to seek revenge.

The character work even extends to Morelli and McGee. While still unrepentant, villainous assholes, they are given slightly more motivation for their criminal behavior than most exploitation movie bad guys. Returning to Los Angeles with a chip on his shoulder about how he was treated as a low-level crook before going into the Army, Morelli is driven as much by revenge against the old crime bosses as he is by the desire for money. McGee, his ego still bruised from losing Maria to Doug years before, just wants to acquire the power that comes with being a top crime boss so he can force Maria into returning to him. Granted, these motivations are shallow and fairly perfunctory, but just the fact that Santiago and his screenwriter Howard R. Cohen took the time and effort to actually give their villains even any psychological drive other than greed makes DEATH FORCE stand out in the crowded exploitation scene of the late ’70s. 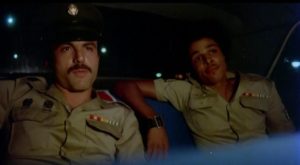 The second half of the film, as Doug cuts a bloody path through a couple dozen of Morelli and McGee’s underlings, is weaker and more traditional in some respects, but also shifts into a tone of swooning melodrama (Maria is even a torch singer in a nightclub, to justify having a melancholic musical number) complete with a romantic montage and sense of tragic inevitability. With the oddly romantic score by Jaime Mendoza-Nava, two doomed romances, and a focus on violent men bound by honor, it almost feels like Santiago was creating the template for the kind of highly stylized action melodramas that John Woo and his contemporaries in Hong Kong would start making in the mid-’80s. 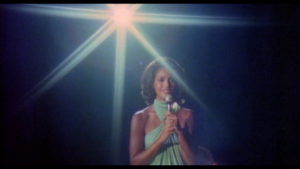 It is just too bad that Santiago was not able to nail down the shift into the mixture of melancholy and violence the film takes. If he had, I would be singing the praises of DEATH FORCE for years to come instead of recommending it as a fascinating curio with several good moments and characters that do not quite hang together as a complete film. 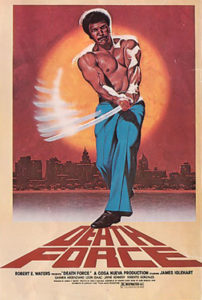