Home  ⁄  The Wire  ⁄  The Sense of an Ending: Why the Conclusion of AVENGERS: INFINITY WAR Matters ***SPOILERS***

(Please note — as the title suggests, I am going to be talking about the end of AVENGERS: INFINITY WAR so there are SPOILERS ahead. You’ve been warned.) 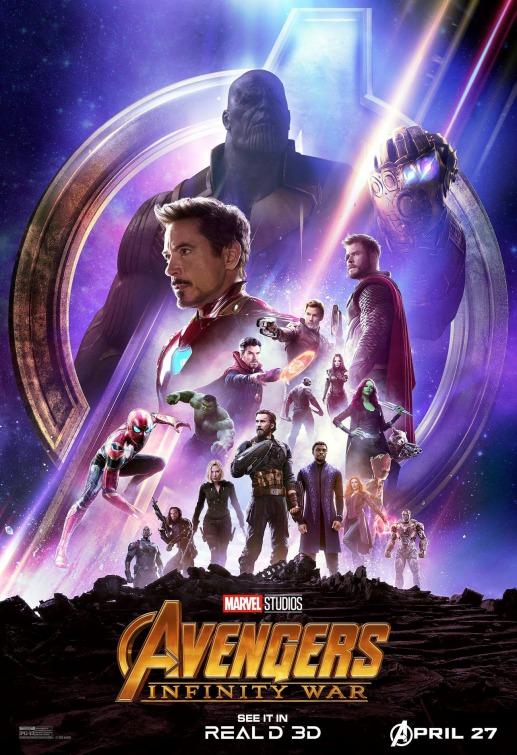 The final moments of AVENGERS: INFINITY WAR find Thanos snapping his fingers and eradicating half of all life in the universe. Viewers watch as, across the battlefields of Wakanda, in the ruins of Titan, and in New York City, characters float away into dust. Thanos, in a remote farmhouse on some distant planet, observes the sun rise on his new existence, content that he accomplished his goals. While the world waits a year or so for the next Avengers film, there are two things that I think are worth noting.

To deal with the first point, even casual viewers (those that don’t follow production announcements, for example) know that this isn’t the end. But for those film and comic book nerds that are aware of plans for a third GUARDIANS OF THE GALAXY film or a second SPIDER-MAN installment, they intrinsically know that characters are coming back. Even the most cynical of Hollywood critics know that while Hollywood has a race problem, they aren’t going to kill off the star of a billion dollar burgeoning franchise like BLACK PANTHER. There will be some machination to bring these heroes back to life. It’s possible that maybe Loki, Vision, and/or Gamora won’t return, though I doubt it; but the main point is that those who were killed by ‘The Snap’ are going to return. Many people have tweeted about this and there are more than a few articles written about the corporate necessity of bringing characters back from the dead. It’s not an astute observation, yet the tone of all of those pieces is one of arrogance and cynicism without thinking in terms of the tale being told. Those “hot” takes miss the point that the inevitable resurrection in no way detracts from the impact of the storytelling. 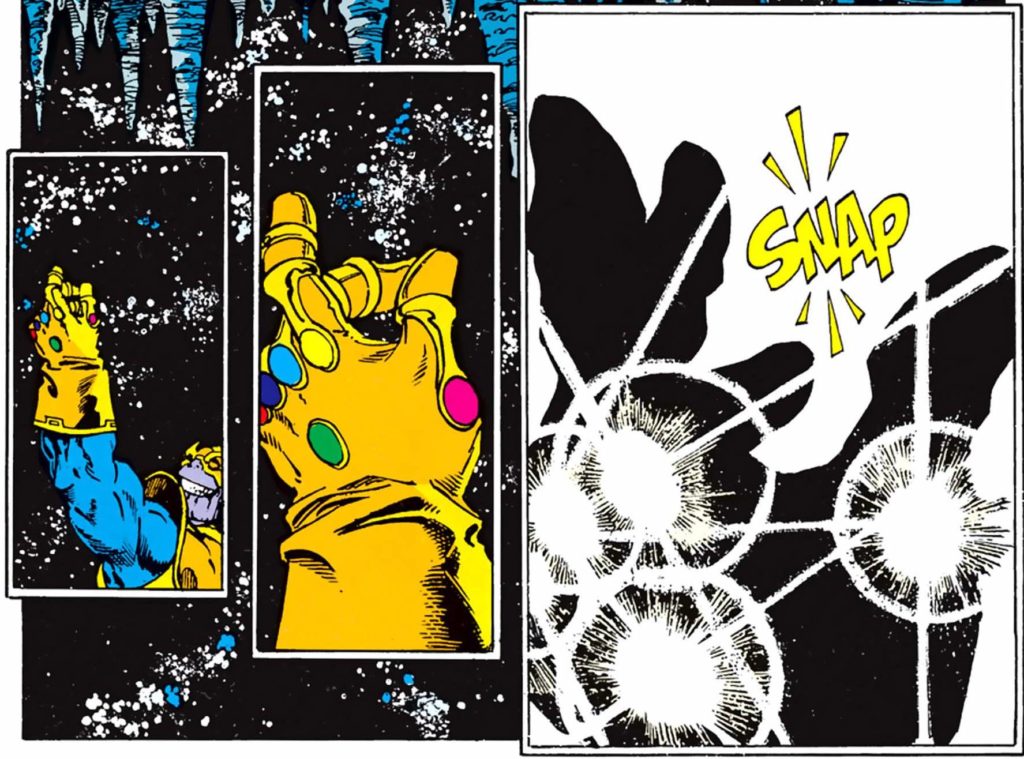 What Marvel — directors Joe & Anthony Russo, writers Christopher Markus and Stephen McFeely, producer Kevin Feige, and everyone else involved in the movie — has crafted is a brilliant blockbuster spectacle about loss. AVENGERS: INFINITY WAR collects the most powerful and beloved heroes from multiple titles — characters who have faced off against alien hordes, demi-gods, dimensional beings, nefarious governments, and dudes in mechanical wings — and throws them at a problem where they fight across multiple planets with everything they have… but they still come up short. That’s a hell of a gut punch.

A terrified teenager apologizes and frets as he dies in agony in the arms of his father figure. That happened as the end of a major motion picture that is going to be seen by millions around the globe. That’s the note this film goes out on — it’s not a hard won victory that required sacrifices but an actual defeat. Our heroes haven’t faced that yet and it’s the one foregone conclusion that is upended. When Gandalf “dies” in THE FELLOWSHIP OF THE RING, people didn’t bemoan the scene or character’s reacting to it even though millions have read the book and knew he would be back in the next installment. When Alex Murphy is gunned down in ROBOCOP, only to be brought back as the titular character, that doesn’t make the loss or horrific act any less upsetting. Or when any Passion story focuses on the crucifixion of Christ, it’s not spoiled by his resurrection days later. It’s because these are emotional elements that feed into the narrative and help form the characters’ responses. 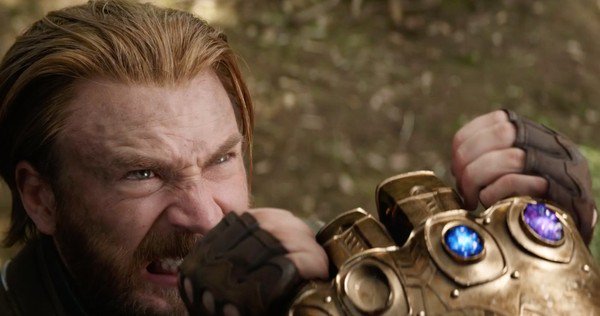 The film doesn’t operate in a vacuum — any more than the individual parts of THE LORD OF THE RINGS or STAR WARS — and it exists in a specific point in time in the larger story’s telling. Right now, though, audiences have to wait a year before they find out what happens next and what this has done to the characters they love. That means that, even with two films in the MCU in between, there’s a year in between installments where people are uncertain of how the plot will be resolved and what will be the price on their heroes. This will change in later years when everything has hit home video — that delayed sense of mourning and gloomy doubt won’t be as sharp. But that downer ending, of heroes undone by powers greater than they, will still be a powerful note. It will feed viewers into quickly going to the next entry but it will still leave them with a sense of loss. This has been born out in THE EMPIRE STRIKES BACK when people had a palpable sense of their heroes being beaten. That finality, however fleeting between the end of INFINITY WAR and middle of AVENGERS 4, will still register when the credits roll on the all-black screen of the Russo Brothers’ recent film and they realize that Earth’s mightiest wasn’t enough.

INFINITY WAR, like all other Marvel movies, is being enjoyed by people of all ages. But, due to society’s perception that these films are all the same “superhero movies,” and that comic book stuff is for kids, Marvel Cinematic Universe movies tend to be targeted to, and seen by, many children. This is their EMPIRE STRIKES BACK, and it is their moment when they realize that the good guys don’t win all the time. It’s a formative pop culture lesson everyone has learned through books, movies, TV, and it’s a necessary one that doesn’t stifle optimism, but one that honors reality and hardship. That inevitable resurrection of (most of) the deceased doesn’t diminish it. Just as people of faith, who fervently believe they will be reunited with loved ones in the afterlife, still mourn death in their lives, so too does watching Falcon crumble to ash unseen and alone register as a moment of finality. 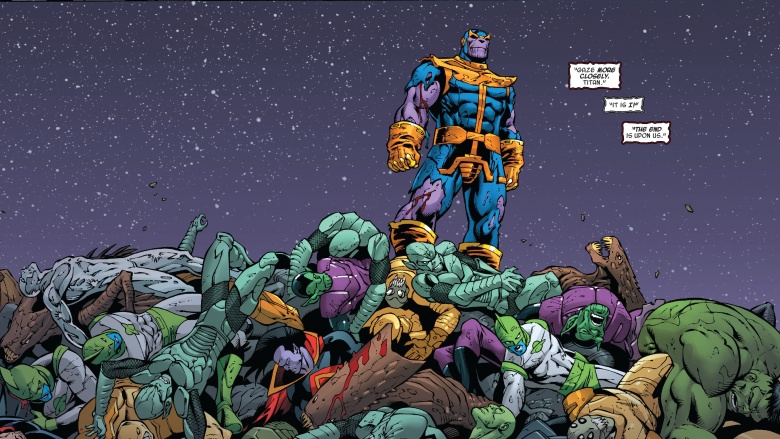 Shakespearean tragedies end with deaths. Shakespearean comedies end with a wedding. It’s probable that this time next year, AVENGERS 4 will be concluding with the nuptials of Tony Stark and Pepper Potts. Everyone that survives will be there (hopefully dancing to either “You’re All I Need To Get By” by Marvin Gaye & Tammi Terrell or “I Won’t Back Down” by Tom Petty and the Heartbreakers), and an eleven-year journey will have a fixed point in time of an ending. But those moments of joy, where people are bantering and celebrating and Rocket is spiking the punch to get Doctor Strange drunk, will be born on the back of the greatest defeat that any hero can ever face. Such a move in serialized storytelling isn’t deserving of arrogant cynicism, but of respect and applause.