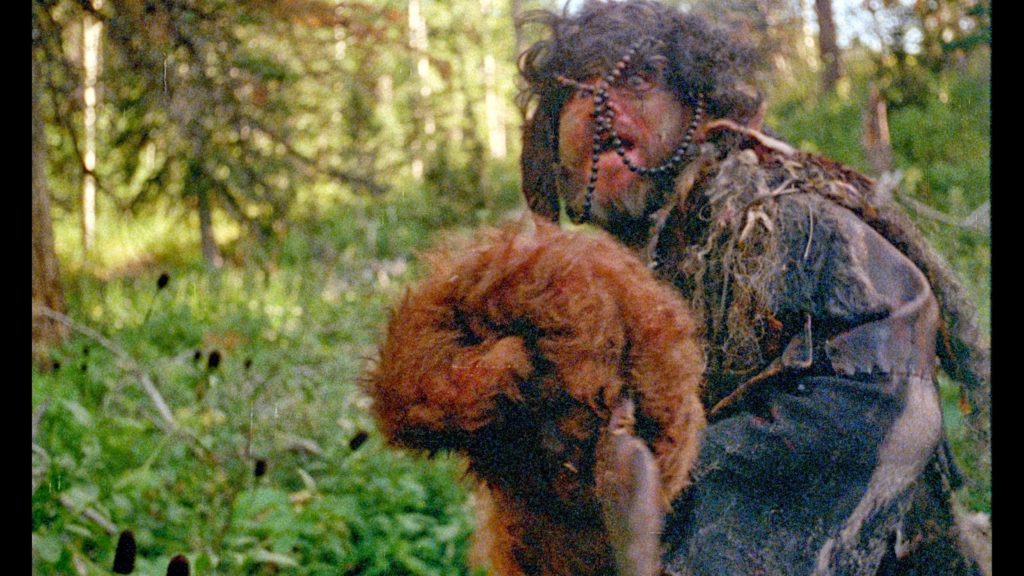 There are some movies that defy traditional film criticism. You cannot watch a movie like DON’T GO IN THE WOODS and come out the other side of it ready to write a straight-forward 700 word piece judging whether or not it fits into your definition of what is good or bad and providing supporting arguments for your opinion. What you can do with the film is marvel at its cold, cold heart and artful (possibly accidental) stripping down of the elements of the slasher genre until it comes to resemble something akin to an avant-garde take on the genre.

A deranged mountain man (Tom Drury) murders over a dozen campers, hikers, bird watchers, nature photographers, and various other generic types who wander into his neck of the wilderness. That’s it. That’s the movie. There is no more plot to it than that and, honestly, that is all the plot the film needs. 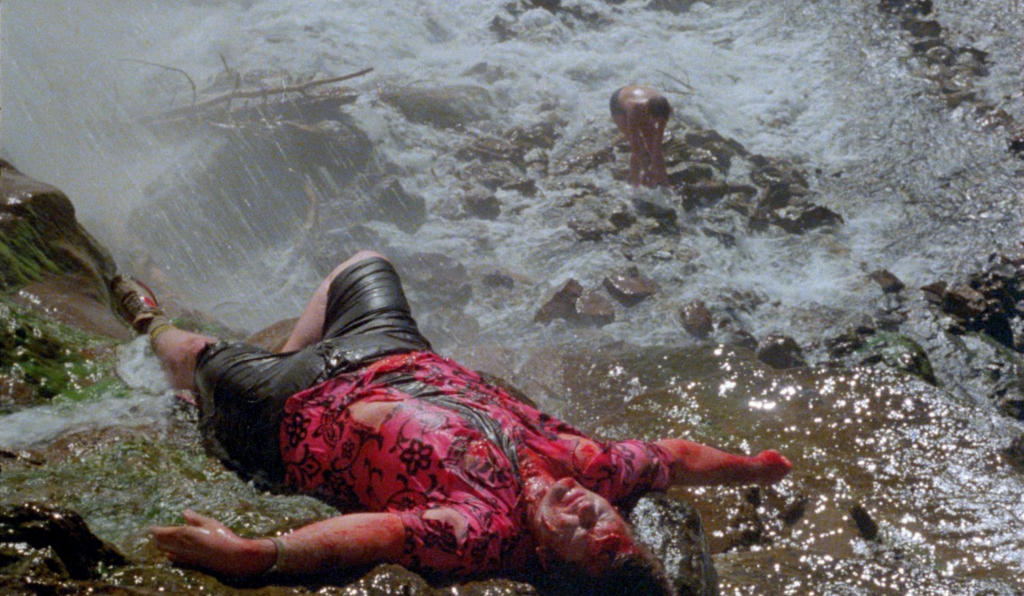 If you were to only take DON’T GO IN THE WOODS at its face value, it might seem like the work of rank amateurs: the acting is really rough, the script is non-existent, the characters are obnoxious caricatures, the score sounds like it was composed for the type of awful kids’ show satirized in DEATH TO SMOOCHY, and the cinematography is best described as perfunctory (at least when light leaks aren’t flaring up on the edges of the frame). But the low-rent qualities are precisely why the film is as effective as it is when the killer pops up to eviscerate a man in gory detail during a well-staged slasher scene. Knowing the director puts so much work into setting up a “kill scene” where a bear trap is swung on a rope to clamp down on a victim’s head, it adds a little bit of demented sleaze to the film that he cannot be bothered to put in that same effort to the perfunctory scenes of establishing the potential victims.

That sort of earned sleaze by way of indifference to any scene involving dialogue in favor of extra bloodshed was sort of a signature of director James Bryan. Perhaps best known for the infamous psycho vigilante flick THE EXECUTIONER, PART II (don’t bother looking for PART I, it was never finished), Bryan worked in the deepest, dirtiest genre trenches where such niceties as character development and a coherent plot were considered wastes of perfectly good 35mm short ends. Whether he was working on softcore films, hardcore adult films, bloody horror, or weirdly fatalistic action/revenge films, Bryan understood he had to get to the good stuff in a hurry and keep providing doses of sex and violence on a regular basis, lest the grindhouse audiences he catered to became restless and turned on the film. 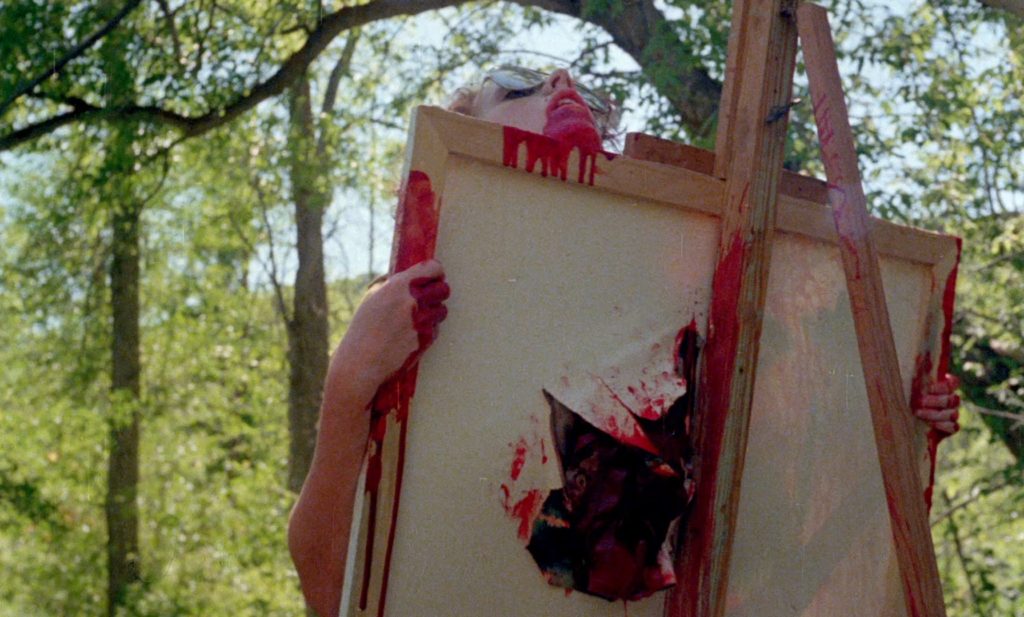 But where the more mainstream/bigger budgeted slasher films of the early ’80s felt soulless in the way they went about slaughtering their group of victims, Bryan brings a healthy dose of ’70s nihilistic nastiness to the killings in DON’T GO IN THE WOODS. People don’t just get stabbed or their head caved in with a shovel and die with a small burst of blood/gore right before a smash cut. Here, they die from dozens of small cuts that render them more and more helpless as they try in vain to get away from the killer. The blood flows freely and is more than a little ridiculous in the amount that is spilled, but for the most part, the actors do sell the terror and panic of being killed in a slow, painful manner. The sudden changes in tone from laughing at some poorly blocked scene of exposition to violence that is honestly horrifying at times are what make the film oddly compelling.

The screenplay by Garth Eliassen also calls back to the ’70s with its killer. We never learn why he is killing everyone he comes across. He simply kills. The grisly bodies he piles up are unsettling enough without any sort of psychological explanation. He resembles a more feral Krug from THE LAST HOUSE ON THE LEFT in that he is simply a bad man who exists and will kill you if he gets the chance. Even the film’s ending is more reminiscent of the nihilistic horror of the ’70s than the more shock-driven slashers of the ’80s. 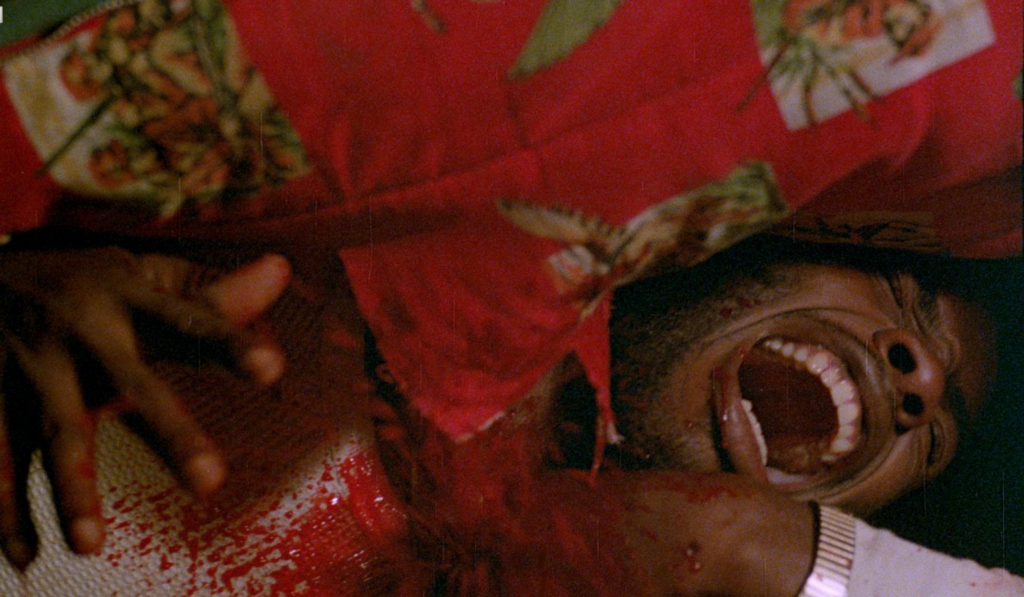 DON’T GO IN THE WOODS is not for all tastes. You have to be able to stomach all of the eccentricities and slipshod filmmaking present to appreciate the pure jolt of weird and ugly turns it takes. But to me, those crazed, bloody, unrelenting sequences are exactly what grindhouse cinema is best at providing. The filmmakers understand that and deliver the goods, over and over again. How could anyone complain about that? 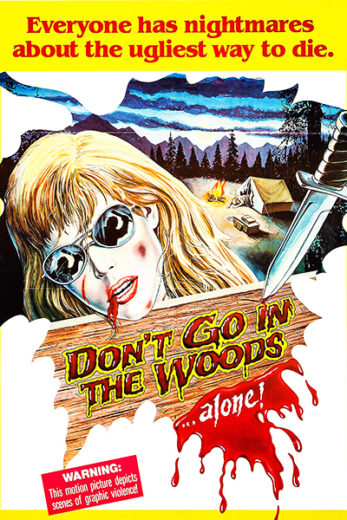