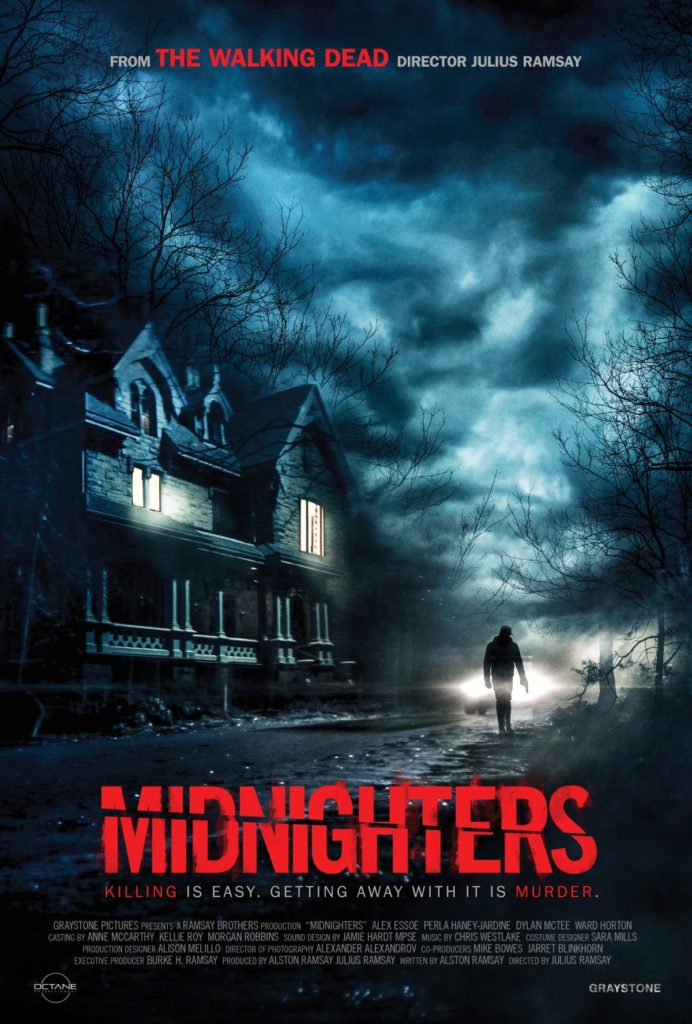 Long before the acclaim and Oscar hardware came their way, both the Coen Brothers and Danny Boyle began their respective careers with coal-black chunks of double-crossing inhumanity. BLOOD SIMPLE and SHALLOW GRAVE were simple tails of relationships torn asunder by greed, sex and murder, hearkening back to an older style of shadow-drenched tales about good people gone bad  and bad people gone worse. With MIDNIGHTERS, TV director Julius Ramsay has thrown his hat in the ring to continue in the grand tradition of morally sticky tales of small-town crime.

It’s New Year’s Eve, and neither Lindsay (Alex Essoe) nor Jeff (Dylan Tee) are fit to drive. That doesn’t stop them from attempting to make it back to their out-of-the-way rural home once festivities end. It also doesn’t make it a surprise that when they run down a man walking alone on the darkened road in the middle of the night, and he dies in their vehicle, they decide to go back home to sober up and think about their next step, rather than head to the nearest hospital.

And it’s not surprising that it is not the first bad decision the couple will make over the course of the next day. Jeff discovers the man has their address in his coat pocket, and he was on their way to pay them a surprise visit in the middle of the night. Lindsay’s younger sister Hannah (Perla Haney-Jardine), staying with them after a bad breakup, discovers the mystery man’s bleeding corpse in the garage — and discovers that he isn’t entirely dead, after all. Soon enough, paranoia, accusations, and suspicions pile up as relationships fracture, and each individual begins playing one off the other. 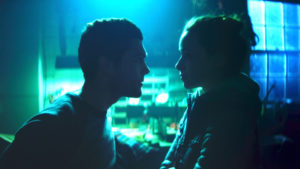 As a modern variation on the kind of BLOOD SIMPLE style neo-noir, MIDNIGHTERS proves to be a thoroughly middle-of-the-road affair. Ramsay is working from a script by Alston Ramsay, his brother, and we get the usual screw-turning twists as the characters act like chess pieces moving across the board, positioning and re-positioning themselves as victors and victims as power struggles ebb and flow. Alston Ramsay’s script probably has one turn too few, however; even a casual viewer might be able to suss out who is who and what is what as the film goes on, with the biggest surprise being that one character turns out NOT to be as bad as we think they are.

Julius Ramsay’s direction is perfunctory but not without a modicum of stylishness, shooting everything in a clean and clear shadows-and-light vision that one expects from a film bearing the term “noir” in its genre descriptor. What really works in MIDNIGHTERS‘ favor is the acting, especially from the always reliable Essoe, who makes Lindsay a sympathetic grounding force to the violence and double-dealing surrounding her. As a mysterious detective who shows up at the doorstep, with a genial smile and a few questions to ask, Ward Horton overplays his hand a little too-fast-too-early, lending a large hand to some of the film’s faults with predictability, but his scenery-chewing, bugged-eyed performance also a distinctly hammy quality that is enjoyable in the cured-pork way of latter day Nicolas Cage.

And, despite the predictability, MIDNIGHTERS is not, by and large, a bad film. It’s solidly made and actually engrossing, even if it never actually transcends the cliches of its medium — the kind of thing to watch on a rainy Sunday. It’s an effectively made, decently staged and well-acted bit of B-level pulp mystery. The Ramsays’ debut feature may not actually be a patch on the back of BLOOD SIMPLE, but in their own (blood) simple way, they have made a decent, if distinctly average, calling card of their own.