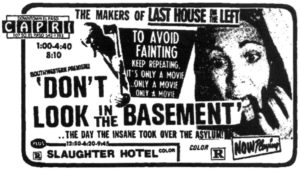 I enjoy this trailer that falsely claims that DON’T LOOK IN THE BASEMENT is from the makers of THE LAST HOUSE ON THE LEFT and uses footage from Wes Craven’s shocker. While both films were distributed by Hallmark Releasing Corp., they shared no other connection. Dishonest exploitation marketing at its finest.

In look, feel, and plot description, DON’T LOOK IN THE BASEMENT (a.k.a. THE FORGOTTEN) seems like it should be trashier and a lot more fun than it actually is. While there are some tasteless elements at play, the more graphic exploitation moments in the film are few and far between, leaving this odd mixture of southern gothic mixed with midnight movie camp stranded in a no man’s land where it is just a little too well made. Perhaps the closest I can come to an accurate description of how it came across to me is if William Faulkner and John Waters collaborated on scripting a remake of ONE FLEW OVER THE CUCKOO’S NEST, but had their delirious, trippy screenplay drained of most of the kinkier themes and plot points by a skittish producer. 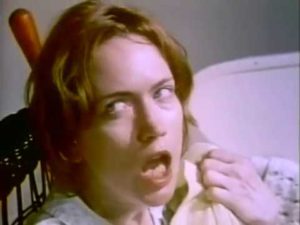 At a privately run clinic for patients suffering from extreme mental illness, things are in a state of upheaval. Nurse Jane (Jessie Lee Fulton) has decided that she cannot take the working conditions any longer (Who can blame her when one of the patients threatens to kill her in the second scene of the film?) and announces to the director of the clinic, Doctor Stephens (Michael Harvey), her decision to leave. No sooner has she delivered this news than a patient known as Judge Cameron (Gene Ross) buries an axe in the good doctor’s back. 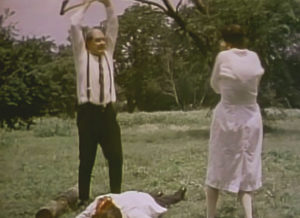 As Doctor Masters (Anne MacAdams) steps in to the leadership role, Nurse Jane is indeed murdered by Harriet (Camilla Carr), yet another patient in the hospital. Into this chaos walks naïve new nurse Charlotte (Rosie Holotik). Charlotte is drawn by the controversial new treatment idea of Doctor Stephens to force his patients to recover from their mental illnesses by making their symptoms so overwhelming that they either fight through them or give into total madness. Considering that Charlotte would buy into such a terrible treatment idea, it is not that surprising that she barely bats an eye when informed that Stephens has been killed by a patient and offers to stay on to help Masters since Nurse Jane has “left.”

Over the next thirty or so minutes, things drift back to normal at the clinic. But “normal” is revealed to be a fluid idea, especially in a film from 1973 that unsurprisingly treats the mentally ill as either helpless kooks or potentially homicidal maniacs. With the confidence of filmmakers who have no clue what they are talking about when it comes to mental illness and are not held back by concerns that their portrayal of the characters might be offensive (you could never make this film today), writer Tim Pope and director S.F. Brownrigg add on as many quirks as possible to the patients. 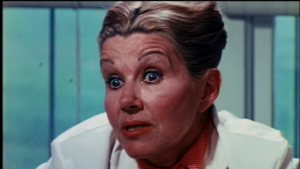 Judge Cameron is severely sexually repressed and only talks in courtroom clichés. Sam (William Bill McGhee) was lobotomized years earlier, so that apparently makes him act like a seven or eight-year-old child in the body of a towering thirty-year-old man. Harriet carries around a baby doll that she believes is her child. Sergeant (Hugh Feagin) lost several men in “the war” (it’s never said which one—assumingly Vietnam) and now watches for the enemy through binoculars out his window while barking orders at the other patients. Allyson (Betty Chandler) was used and dumped by her boyfriend, an experience that was apparently so traumatic that she rips her clothes off and throws herself at every man she sees. And there is Mrs. Callingham (Rhea MacAdams), an elderly woman who believes that the flowers in the fields surrounding the clinic are her children. 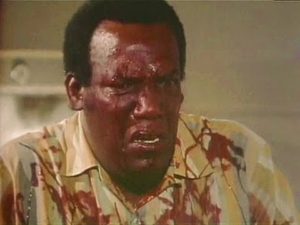 Of course, the savvy reader may wonder what a bunch of clichéd patients at a mental clinic and a clueless nurse have to do with what’s going on in the basement and why you should not look in it. Like most of these exploitation flicks that begin with the word “Don’t,” DON’T LOOK IN THE BASEMENT is simply a catchy, ominous title that has almost nothing to do with the story the film is telling. Oh sure, there is a basement, but it is never even mentioned until the last ten minutes of the film. When Charlotte inevitably looks in it, it would be charitable to say that what she finds is not exactly shocking (the less charitable thing to say would be that what she finds is very predictable).

Here is the kicker: despite every negative thing I’ve had to say about the film, it remains a watchable curio of the early ’70s regional horror film movement. The acting is better than I expected, with several recognizable character actors. The twists of the plot—while obvious—fall into place like a well-oiled machine. The bits of gore (the disturbing aftermath of a tongue cut out of a mouth, a spike in the eye, bloody axe murders), while sparse, are effective. And the film finally throws off the odd restraint it shows for most of its run time with a whacked out ending that is exactly what I wanted from the entire movie. 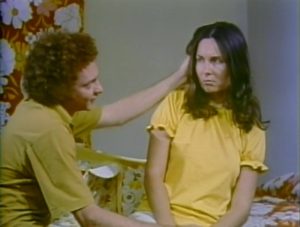 Maybe I should simply be thankful that DON’T LOOK IN THE BASEMENT was as watchable as it turned out and not want more. I have watched far, far worse films for this column (some of which were so bad, I decided to not even write about them), so to find out this one reached the level of “good enough” should have been a relief. But I cannot get by the feeling that there was a wilder, goofier, far more entertaining version of this film to be had if Pope and Brownrigg had just leaned harder into the inherent tackiness of the premise instead of settling for something that was surprisingly middle of the road.

Semi-interesting Footnote: Tony Brownrigg, the son of S.F. Brownrigg, made DON’T LOOK IN THE BASEMENT 2 and released it in 2016. I’m not sure if I’m enough of a glutton for punishment to watch it. 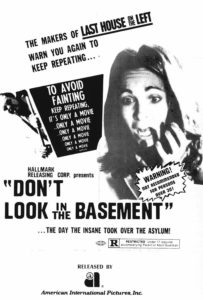