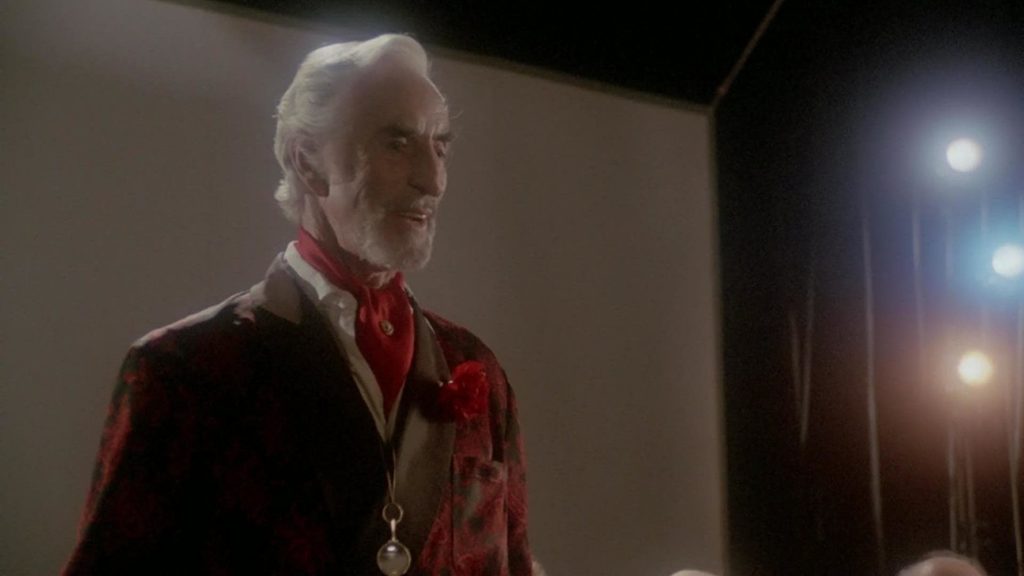 Here’s a trailer that shows off all thirty seconds of good effects work in the film:

FRIGHTMARE (a.k.a. THE HORROR STAR and BODY SNATCHERS) is an odd film. It hinges on a clever, slightly self-aware set up, but fails to do anything of much interest with that set up. It sports fairly good performances from most of its cast and is shot and edited better than many low budget horror films of the time, yet that polish feels like it diminishes any impact of the very few visceral horror moments that occur in the third act. More than anything else, despite the decent hook of the premise and the overall professional sheen of the movie, it simply sits there on the screen, failing to engage the audience or have a real reason to exist.

Conrad Radzoff (Ferdy Mayne, credited here as Ferdinand Mayne) is an aging star of old horror movies (think the debonair demeanor of Christopher Lee with the late career hamminess of Bela Lugosi) who has been reduced to appearing in TV commercials spoofing his old image. In the opening scene, he misses his mark—for the third straight time—in one of these commercials, gets screamed at by the petulant director of the commercial, and calmly waits for the director to take a moment to himself. With no one around, Conrad uses the opportunity to shove him from a high balcony to his death. 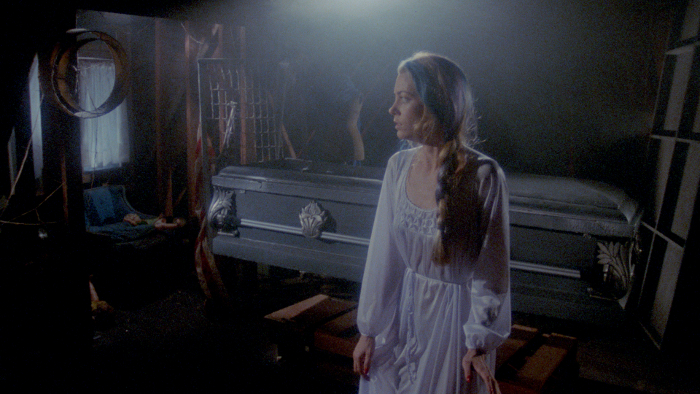 With it established that Conrad is quick to jump to homicide against those who anger him, writer/director Norman Thaddeus Vane (admittedly, one of the best filmmaker names I have ever heard) starts the heavy lifting of getting the film’s creaky plot into motion.

After a near-death experience due to his failing heart, Conrad readies everything for his eventual demise, with the plan that death will be his greatest part. When he does die one scene later, his funeral is indeed extravagant. He delivers his own tongue-in-cheek eulogy via video, is interred in a massive and garish tomb complete with his last name inside a neon star hanging over the door, and he apparently has the ability in death to astral-project his spirit and harm those who he feels deserve it. At least, I think it is supposed to be some form of spirit projection and not Conrad’s corpse actually getting up and killing people. The movie is a little fuzzy on the details of exactly what the power is supposed to be.

When the members of the “horror film society” of a local college breaks into Conrad’s tomb and steals his body as a prank/irreverent tribute, his undead wrath is unleashed with ghoulish, grisly, extremely violent…actually, Conrad’s revenge, while deadly, is fairly tame. Not to sound like some kind of gorehound, but that is where the film basically lost my last bit of interest. 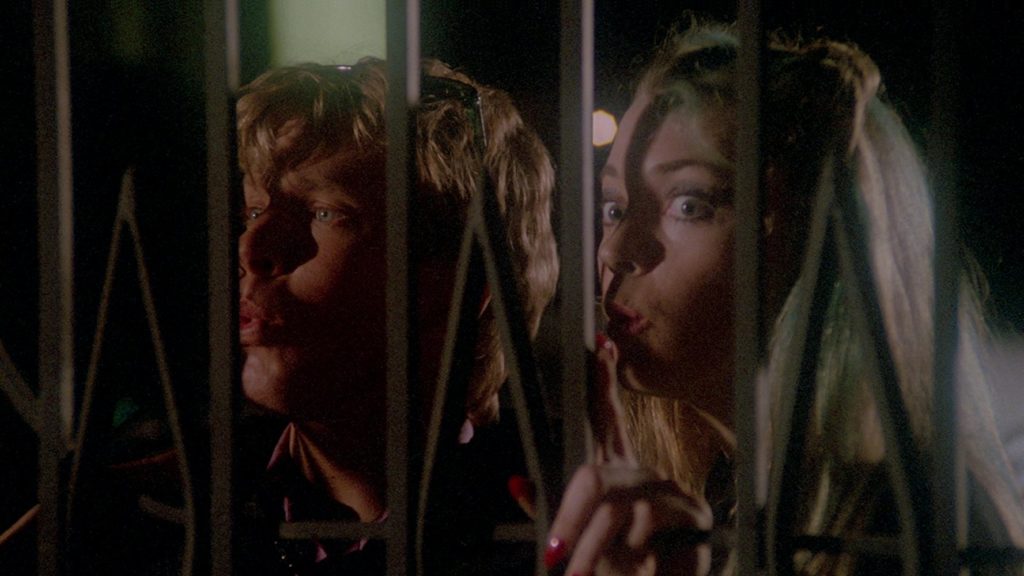 The idea of presenting a beloved, legendary horror star as a pompous, cynical, breezily murderous figure is an interesting idea. For one thing, film fandom has always lauded its legends. Horror fandom is especially rabid about bestowing unconditional love on its cult favorites. I am as guilty of this as anyone. To turn that idea on its head and have the object of geek adoration kill those that adore him is smart and a little subversive. But Vane has nothing of interest to say about fandom or the way the film upends hero worship into something that can quickly turn ugly. Instead, he turns the film into a basic body count film.

I’m not an idiot. This column is all about exploitation films. Inherent in that idea is that the films will be more about satisfying the audience appetite for base thrills via gratuitous violence or sex and nudity (oftentimes all three). But FRIGHTMARE does not really fulfill even those most basic requirements. Aside from one very tame sex scene that never really gets started and a couple of brief gore bits, the film is fairly restrained when it comes to standard exploitation fare. Perhaps Vane thought of this as a “classy” approach more in line with the kind of old fashioned horror films that Conrad would have starred in? That is the only idea I can come up with. 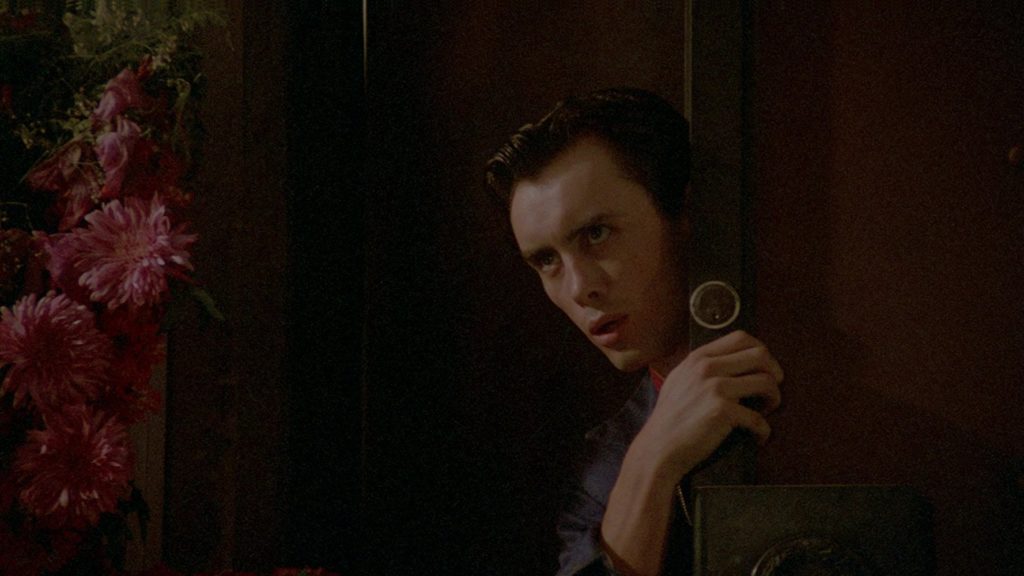 There are good components to FRIGHTMARE. The first act set up is sporadically fun as Mayne chews the scenery with aplomb. The fact that Mayne had a very prolific career as a character actor in exactly the types of films that Conrad starred in adds a slight meta layer to the proceedings. The cast is filled with good character actors that were both veterans (Nita Talbot, Barbara Pilavin) and just getting started (Jeffrey Combs, Luca Bercovici) at the time the film was made. Despite the overall lack of much in the way of entertaining effects work, there is a nicely done decapitation in the third act that shows that Vane had the crew to pull off such gags, but apparently chose not to. 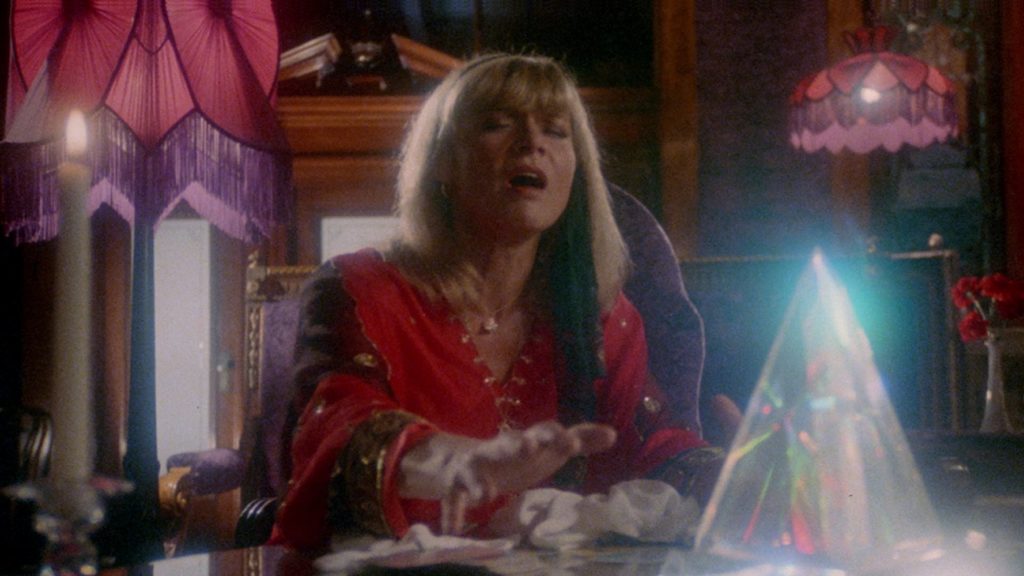 Despite the sporadic interest FRIGHTMARE does provide, for most of the way, it is an inert piece of work. While never an out and out bad movie, it is largely mediocre and never comes close to cashing in on the potential it sets up. It may be of interest to Jeffrey Combs completists or for fans of old Hammer horror films looking to dip a toe into slightly more graphic fare, but for seasoned exploitation viewers, it is largely a yawn-inducing experience. 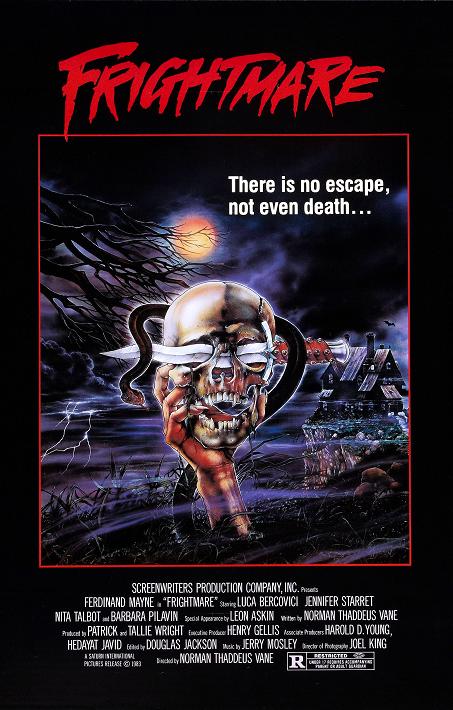