Slow-burn horror is a tricky genre to pull off. It’s essentially the equivalent of walking a tight rope. Balance is key, and in particular pacing can make or break the success of the act. Philip Gelatt’s THEY REMAIN, an adaptation of the short story “-30-” by Laird Barron, attempts this act and overall manages to pull it off successfully thanks to two good actors, some beautiful cinematography and a fantastic soundtrack. 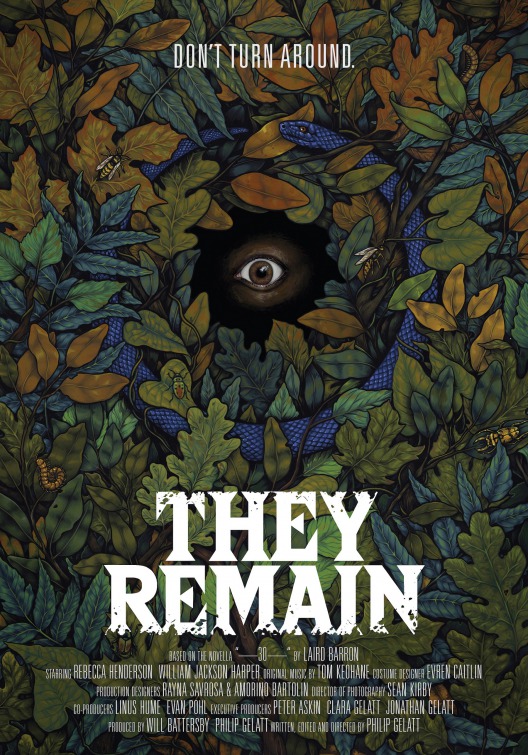 THEY REMAIN focuses on Keith (William Jackson Harper) and Jessica (Rebecca Henderson), two field agents sent by their employer to conduct research on animal behavior in an isolated section of woodland… that also happened to be the site of a massacre involving a murderous cult. Though don’t be fooled into thinking this film is going to be a take on the “cursed burial ground” idea made iconic by POLTERGEIST. You won’t be seeing these two characters fighting for survival against murderous cultists. Instead you’ll be watching as the isolation and paranoia begins to take it’s toll on them over the course of the movie’s run time.

When a movie relies on two actors in an isolated area to carry it through its entire runing time, it’s important that they can carry that heavy burden. Thankfully both Harper and Henderson are up to the task and both handle it very well. Harper in particular is the standout, since he is the one who is typically traversing the woods, while Henderson’s Jessica is back at their small, somewhat futuristic research lab. These stretches, where Harper’s Keith is wandering the woods, are beautiful, and easily some of this writer’s favorite segments of the film. The camerawork lets you take in the forest scenery, and combined with the eerie subdued soundtrack that still allows the sounds of nature to seep through, it pushes the isolated atmosphere even further. The actual dialogue between the two leads and the few other characters they interact with is solid — there are some lines that felt a bit awkward, but nothing that detracted too much from the overall mood. The movie really does its best when it focuses on those quiet moments where the soundtrack and the scenery do the talking, along with the bizarre and otherworldly visions that are peppered throughout.

THEY REMAIN, like most slow-burn horror, isn’t for everyone. It moves at its own pace and reveals information when it wants to. You want to know more, you want to see what happens next, yet it doesn’t let you know if it will happen. The fact that the film doesn’t rely on jump scares, and relies instead on just stretching the paranoia tighter as it moves to its conclusion, makes for some great watching, especially with a good sound system or with headphones on, to really soak in the environment. It’s a weird, trippy-at-times, and unsettling ride that’s worth it for those who want to try something different.