Home  ⁄  The Wire  ⁄  [MY EXPLOITATION EDUCATION] ‘GALAXY OF TERROR’ EXCELS WHEN IT EMBRACES ITS UGLY, NIHILISTIC SIDE 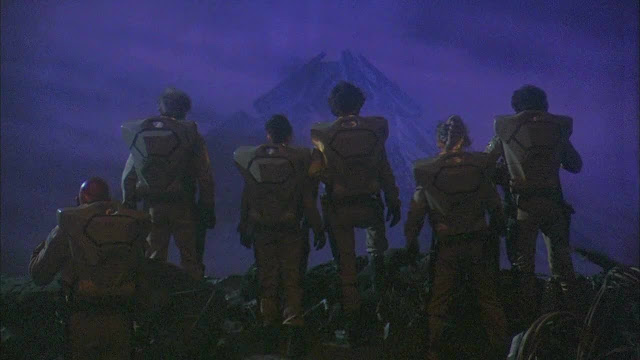 I was distracted during the opening credits of GALAXY OF TERROR by breaking up a fight between two of my cats (yes, there are more than two—it’s ridiculous), so I was not aware of the eclectic cast I was about to take in as they popped up. My thoughts as the completely mismatched character actors made their appearances went something like this:

Whoa, is that a young Grace Zabriskie wearing a bad gray wig? And yep, there’s Sid Haig, because of course he’s in this—ah, cool, pre-Freddy Krueger Robert Englund, always good to see him…wait a second, she looks familiar (pauses movie to study the actor’s face). Is that—? Wow, it is…Joanie from Happy Days! I feel bad that I can’t remember her name (Erin Moran). Gee whiz, what in the hell is Ray Walston doing in this? Who’s that guy? He looks familiar…sort of like a young Matt Craven, but just way too angry and intense—what a second…Holy shit, that’s Zalman King! 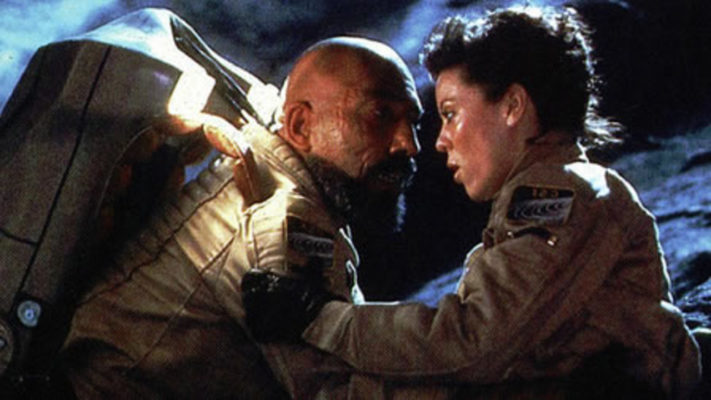 The plot of GALAXY OF TERROR makes about as much sense as the random assemblage of its cast.

After an opening stinger of a random extra aboard a spaceship being killed by something tentacle-y, the film jumps to some hogwash about a “master”—a humanoid being with a red, glowing orb in place of a face—who decides to send a rescue crew to see if there are any survivors on the spaceship from the opening. This is done as an attempt to win some sort of game that is mentioned, but never once is there an attempt at explaining.

The rescue crew is made up of the ship’s unstable Captain (Zabriskie); a trio of fighters in Cabren (Edward Albert), Quuhod (Haig), and Baelon (King); Alluma (Moran), a psychic with vaguely defined powers; even more vaguely defined “tech specialists” Ranger (Englund) and Dameia (Taaffe O’Connell); and the ship’s cook Kore (Walston). The crew gets along together about as well as logic does with the storyline of the film. 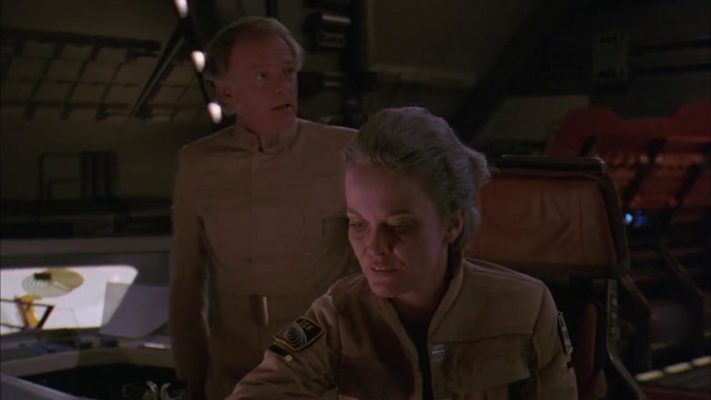 After an entertaining sequence involving a hyperspace jump that finds Zabriskie chewing the scenery to great comic effect, co-writer/director Bruce D. Clark (credited as B.D. Clark) gets GALAXY OF TERROR down to business as the ALIEN ripoff it was intended to be (the film was released in 1981—two years after ALIEN, which was actually a bit slow in terms of producer Roger Corman’s normal track record of knocking off studio hits). The crew end up on a desolate planet, something begins picking them off one-by-one, they learn that one of their own may be responsible for helping the mysterious entity to kill them, and a woman is raped and murdered by a giant maggot. Okay, I’m not sure that last part was inspired by ALIEN so much as it was required by Corman to fulfill a promise to distributors—but it seems to largely be why the movie is remembered. 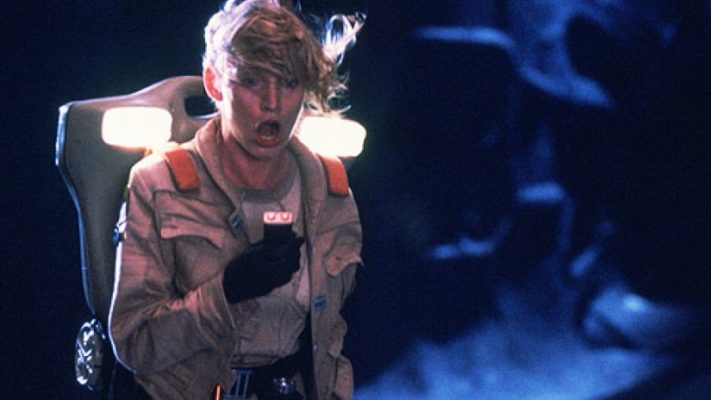 GALAXY OF TERROR is both better than it should be and not as good as it could have been. The design of the sets (I’m sure some of these were recycled from the previous year’s BATTLE BEYOND THE STARS) is imaginative in places, managing to strike a discordant note of true menace (I guarantee you GALAXY was an influence on EVENT HORIZON). There are some great, straight up horror movie sequences involving characters dying via an exploding face, a severed arm, self-immolation, etc. And it’s nice to see Englund excel in a relatively straightforward role that does not ask him to be overtly weird or serve as a mouthpiece for exposition. 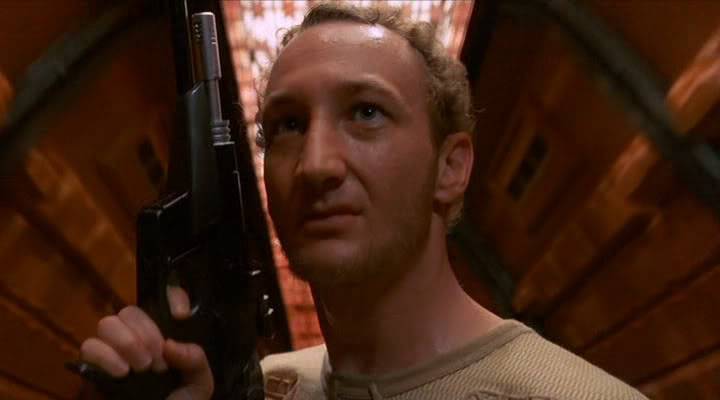 Where the film runs into trouble is that it feels like twenty to thirty pages of exposition and character bits were cut out, even though all the characters keep referring back to moments never shown or talked about. On the one hand, I liked the fact that Clark tries to present this as a developed world with characters who have (mostly) known each other for a long time and the audience is just dropped into it. On the other hand, I constantly found myself confused by things that struck me as random that apparently were important. Why—for example—does the crew burn every dead body they encounter (with their laser guns, no less) like it is protocol? Why do Cabren and Baelon hate each other so much? If the monster takes on the form of what each crew member fears, why are we only given two concrete examples of this, while everyone else just gets randomly killed by the tentacle-y monster that sometimes appears as some sort of alien demon? 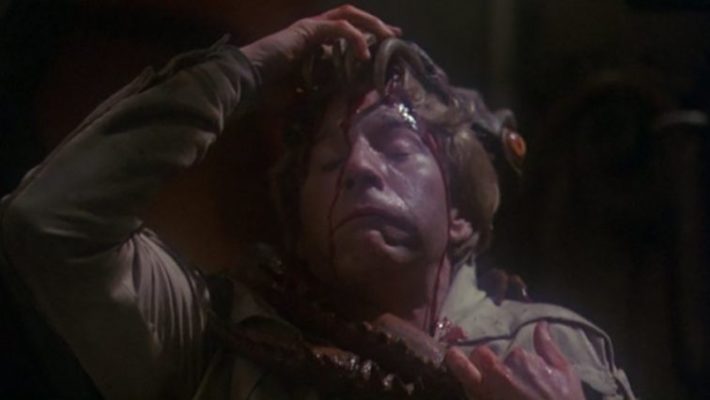 Despite these massive plot holes (or maybe because of them) GALAXY OF TERROR does manage to cast a strange spell that makes it hard to turn away from. There is something compelling about its slightly scummy, nihilistic tone. It feels a little more dangerous and unhinged than most of the Corman-produced cheapies from the era and I appreciated that willingness to veer from weird to ugly and back again.

Worth noting: James Cameron served as the second-unit director on GALAXY OF TERROR. It is not a huge leap to assume that the basic plotline here of a crew of military types on a rescue mission to a bleak, desolate planet influenced his screenplay for ALIENS. 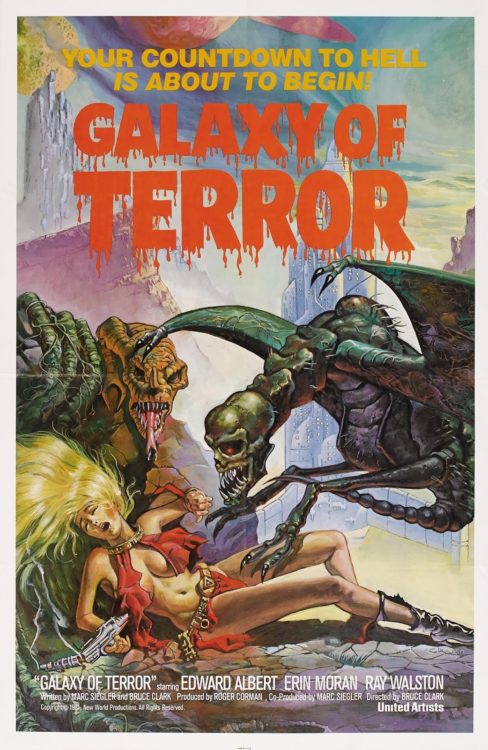