By the end of 1991, Full Moon Entertainment was beginning to hit its stride. The company rose from the ashes of Empire Pictures in 1989 with main man Charles Band wanting to create horror, sci-fi and fantasy films on a low budget that looked bigger than they actually cost (which admittedly, wasn’t much). Band was one part Roger Corman and one part Stan Lee: from the onset of Full Moon, Band wanted to create a cinematic universe that tied all of his films together like the comic books he grew up on. Full Moon’s first release, PUPPET MASTER, was a surprise hit for the studio in 1989, and made Full Moon a force to be reckoned with in the burgeoning direct to video market thanks to distribution from Paramount. With the second sequel, PUPPET MASTER III: TOULON’S REVENGE in 1991, the studio entered into a brief run where it looked like Full Moon could have taken over the world, if at least the horror shelf of your local video store.

Nobody seems to adore murderous toys more so than Charles Band, the man behind DOLLS, DEMONIC TOYS, DOLLMAN, and RAGDOLL. His cabal of killer puppets—Blade, Pinhead, Leach Woman, Jester, and Tunneler—immediately became fan favorites and a sequel was rushed into production. PUPPET MASTER II followed the further adventures the cabal of puppets knocking off direct to video attractive psychics. Horror films straddle a weird line when it comes to the bad guys and girls. Most horror series follow the villain, from Dracula to Freddy Krueger, the villain becomes the star of the show and in a weird way, the character that the audience cheers on, even when committing acts of torture and murder. In the first PUPPET MASTER, all of the puppet’s victims, if they don’t deserve it, are certainly asking to die horrendous deaths. The group of psychics that visit the Bodega Bay Inn are a sleazy bunch and it’s easy to get excited when Leech Woman dispatches of one victim in a particularly nasty way. By the end of the film, the audience can see the Toulon’s puppet gang turning face when they attack the evil Neil Gallagher after revealing that he does not enjoy working with them. PUPPET MASTER II was released one year later follows a lot of the same beats of the original film, featuring the puppets under the control of a resurrected Andre Toulon—looking like THE INVISIBLE MAN meets Peter Lorre in MAD LOVE—attempting to bring his wife Elsa back to life through the same formula he used to control the puppets. It’s a bonkers mix of THE ABOMINABLE DR. PHIBES and TOURIST TRAP that mostly works. Again, in the third act, the puppets turn on their master and escape with Camille—a life size puppet—on a road trip to the Bouldeston Institution for mentally troubled tots and teens. 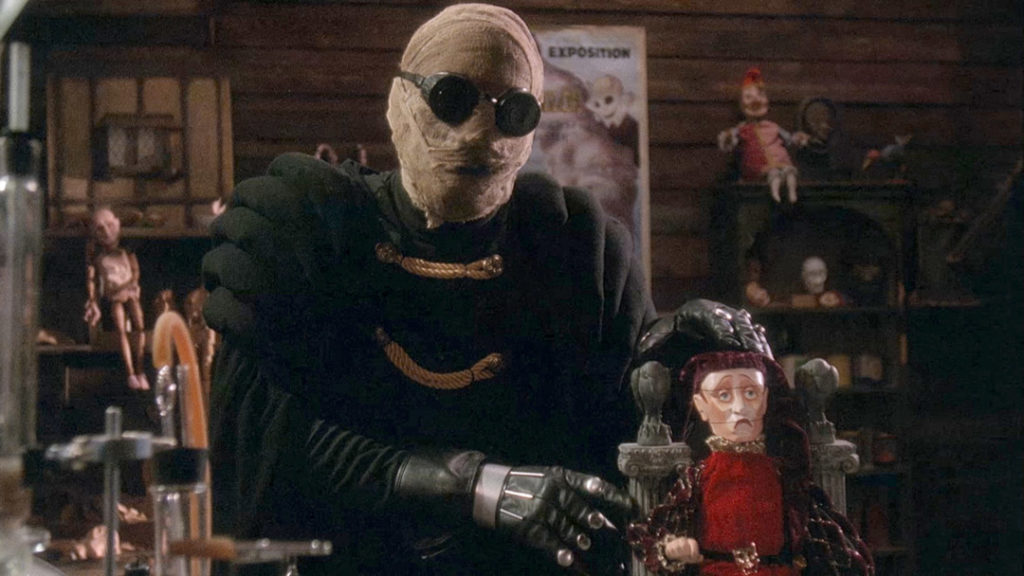 However, now two years in, and the puppets had become the face of Full Moon Entertainment. Taking a cue from Freddy Krueger who, in a weird way, became more “loveable” as the NIGHTMARE ON ELM STREET series moved along, whitewashing Freddy’s child murdering past just little bit. Band saw how much audiences loved Blade and the gang and with PUPPET MASTER III: TOULON’S REVENGE, had the puppets turn face. I’ve often called PUPPET MASTER III the EMPIRE STRIKES BACK of the PUPPET MASTER saga: the film builds off the devil may care, trashy fun of the two previous films but attempts to bring gravitas and even some class to the series through a sharp script and bringing on notable actors with some serious chops.

“I cast the picture the way I wanted to cast it,” DeCoteau explained in the film’s Videozone featurette that was tacked onto the original film’s release, “with the actors I’ve admired for years.”

DeCoteau brought in genre favorites Guy Rolfe (MR. SARDONICUS) to take over the role of French puppeteer Andre Toulon and SUPERMAN II villainess Sarah Douglas as Toulon’s bride, Elsa. Ian Abercrombie—who would come to be known to Seinfeld enthusiasts as Mr. Pitt—portrays Dr. Hess, a man of medicine working under duress for the Nazis, attempting to find a way to bring dead soldiers back to life. While on the surface far-fetched, the Nazis were known for dabbling in the occult in an attempt to create their master race. Genre veterans Richard Lynch and Walter Gotel portray high ranking Nazi officers Major Kraus and General Mueller respectively. There’s never any winking smugness on display in PUPPET MASTER III that can infect some B-movies. Even when Rolfe delivers an over the top speech to his puppets declaring “no mercy” to his Nazi enemies, it’s all handled as seriously and as earnestly as killer toys can be thanks to a slick script by Full Moon mainstay, C. Courtney Joyner. 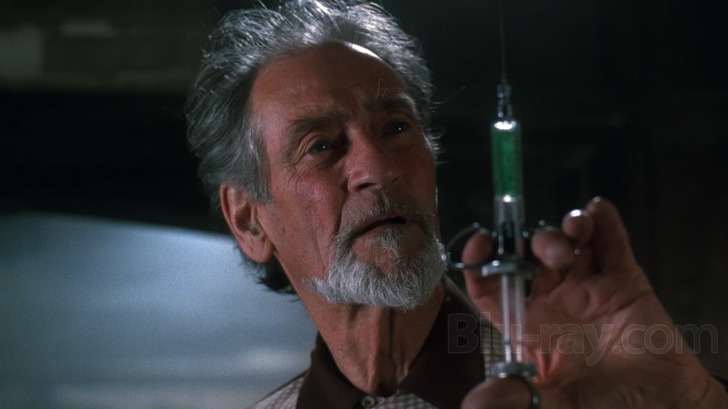 Joyner penned the equally impressive TRANCERS III for the studio the following year. He would return to the PUPPET MASTER  franchise under a pseudonym for PUPPET MASTER: THE LEGACY as well as the unofficial, made for cable sequel, PUPPET MASTER VS. DEMONIC TOYS.

“When I started the script,” Joyner recalled to William S. Wilson in It Came From The Video Aisle: Inside Charles Band’s Full Moon Entertainment Studio,”I told everybody that I wanted to make the WHERE EAGLES DARE of PUPPET MASTER movies. According to the writer, director David DeCoteu was sold on the idea and wanted to “make this one like one of those 1960s WWII flicks they made at Pinewood Studios.”

And that’s just what PUPPET MASTER III is. Similar to 2012’s RED TAILS, this isn’t a serious meditations on the morality of war time, this is a John Wayne movie, a throwback to World War II films of the ’50s where the bad guys are bad and the good guys are good. The John Wayne in this film just happens to be a cowboy puppet with six arms. The original film opens in 1939 with puppeteer Andre Toulon killing himself rather than give over his secrets of reanimation to the Nazis. PUPPET MASTER III builds off of this sequence, making that the puppets cyphers that can be used for good or evil depending on who their master is. They’re like guns, knives, and leeches for hire. And if you’re going to make the puppets the good guys, why not have them do battle with the ultimate bad guys: the fucking Nazi party. 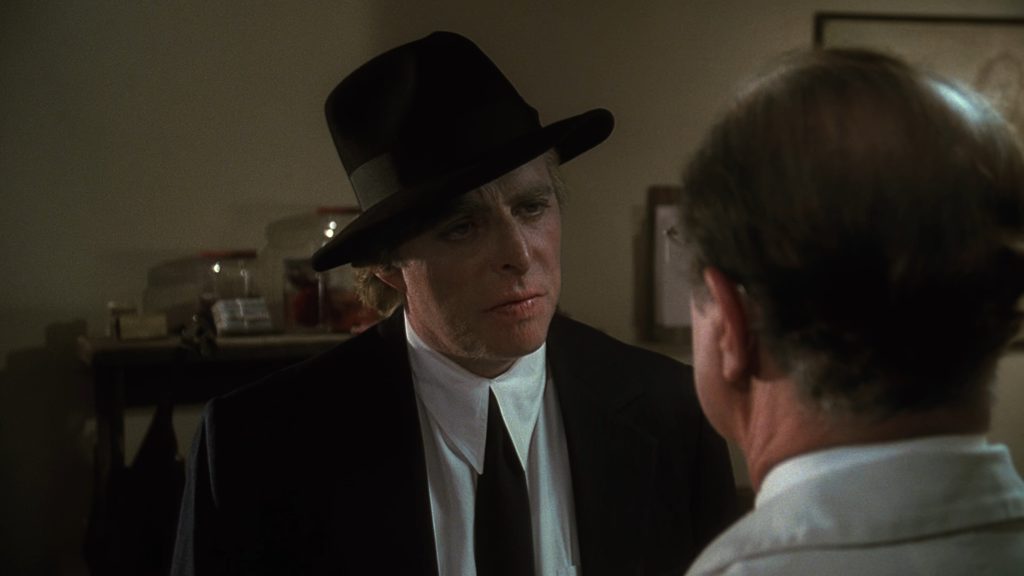 PUPPET MASTER  III sees Band and his team at their most ambitious. Full Moon gleefully put out low-budget films, but TOULON’S REVENGE positively makes good on his promise to garner a big-budget feel. A period piece set in 1941 Berlin, DeCoteu shot a few days of the 18 day shoot on the Universal backlot giving some impressive production value. The film doesn’t care much for continuity (according to the original film, Toulon killed himself in ‘39, but this film takes place in ‘41) but this was 1991, long before there were entire message boards devoted simply to taking all the fun out of a movie by picking apart “logic issues.”

This entry features heavier, more adult—if surface level—storylines than your average direct to video outing outing and certainly for the PUPPET MASTER series. It’s always been hard to figure out just who Band’s target audience for his films were. Full Moon attempted Poe adaptations (THE PIT AND THE PENDULUM), gothic  fairy tale romance (MERIDIAN), and sci-fi comedy (BAD CHANNELS). PUPPET MASTER III features a tragic romance in Andre and Elsa’s relationship with her murder at the hands of Major Krauss setting off Toulon’s path of revenge. It’s not just about Toulon’s hatred for the Nazi’s and what they stand for, it’s what they do to him personally that finally sets him over the edge. Nazis are never sympathetic villains.  PUPPET MASTER III feels like a gory morality tale of sorts, meant to appeal to children, teens, and those adults with a love of trash. If there’s one lesson to take away from it, its that Nazis will murder your loved ones and when Tunneler makes a gaping hole in their chest, they got exactly what they deserved.

This time around there is an origin for story for the puppets, revealing that they are more than marionettes: their wooden bodies are inhabited by Toulon’s friends who were murdered by the Nazis: Jester was a Jewish bookkeeper shot in cold blood by a German soldier, Pinhead a truck driver who delivered food to the Jewish ghettos and killed as a result, and of course Leech Woman is Elsa reincarnated. This twist plays on the tale of the golem from Jewish mythology. In the Hebrew language, a golem is something incomplete or unfinished, like an embryo. In the classic myth, the golem is a clay creature brought to life by Rabbi Judah Loew of Prague in order to defend the Jewish people from anti-Semitic attacks. The golem soon turns face, grows violent and Loew in turn must destroy his creation. And representing the American threat to the Third Reich, why it’s a cowboy of course. A mustachioed puppet with six arms wielding six guns named Six Shooter. There’s a real joy in seeing this unabashedly American character taunt a Hitler marionette early in the film, it really gives a sense of pride to this sometimes not so great nation. 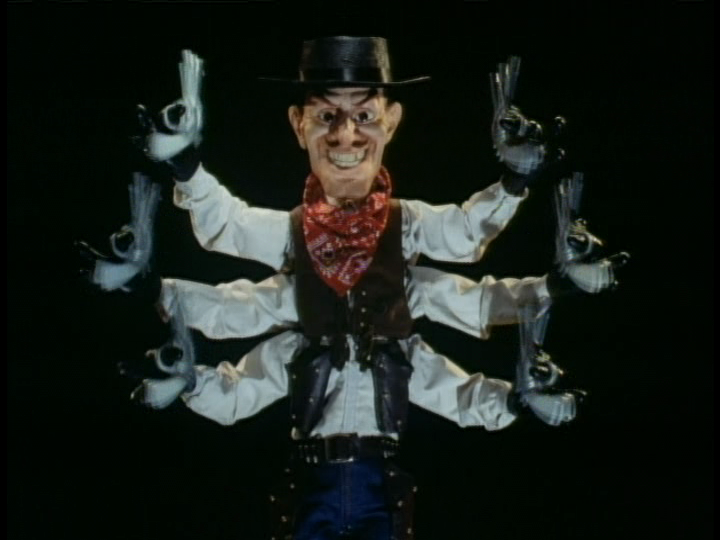 TOULON’S REVENGE was a high point for the PUPPET MASTER franchise offering up direct to video schlock that swung for the fences on production value, scripting, and characters. Throughout 1992, Full Moon released some of their most memorable pictures including BAD CHANNELS, TRANCERS III, DOCTOR MORDRID, and DEMONIC TOYS. There were even plans for a big budget (by Full Moon standards) theatrical PUPPET MASTER film that fell apart. Instead audiences got PUPPET MASTER’S 4 & 5 which easily could have been one film, but were split into two movies, arguably to move more video units. The studio made the same cynical move with TRANCERS 4 & 5 in 1994. Charles Band and his associates certainly had a knack for cranking out low-budget pictures and making some scratch on them, like a Roger Corman for the ‘90s. A line can be drawn from the Full Moon formula to the way Jason Blum of Blumhouse’s micro-budget blockbuster formula. There’s no doubt that PUPPET MASTER III: TOULON’S REVENGE ushered in a golden age for Full Moon Entertainment that lovers of low-budget schlock still adore to this day. Blade and the gang are still fighting the good fight in PUPPET MASTER: AXIS OF EVIL, AXIS RISING, and AXIS TERMINATION, and for some reason, they were reimagined as the Nazis themselves in the recent reboot from Fangoria and Cinestate. Trends and styles come and go, and while some viewers may see TOULON’S REVENGE as cheesy or quaint, but killing Nazis never goes out of style.