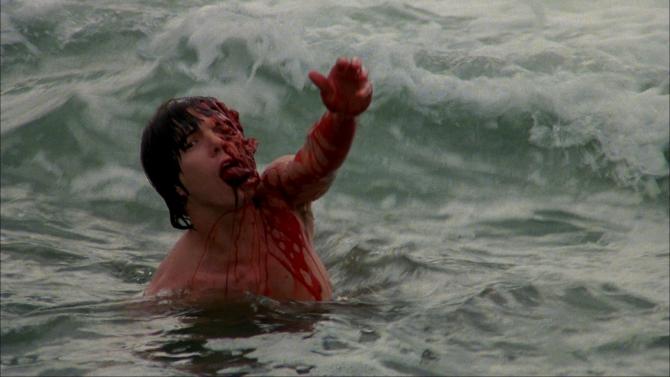 This trailer is very NSFW:

HUMANOIDS FROM THE DEEP is one of the few films I’ve watched and written about for this column of which I knew why it had a reputation. That reputation, unfortunately, had everything to do with the fact that there are scenes in the film of the titular monsters raping women. I don’t know if that foreknowledge made those scenes feel less shocking or if the overall clumsiness of the way they were shot and awkwardly edited into the film undercut their effectiveness because—like most exploitation films—they were simply a sensationalistic element that did not actually live up to their reputation. The very traditional monster movie that takes place around those moments has a few interesting wrinkles before settling for being perfunctory.

Noyo, California is a fishing village on the coast in the northern part of the state. The salmon that the community relies on to keep their economy afloat are becoming more and more scarce, so the townspeople have latched on to the promise of an industrial fish cannery from an outside company that claims to have “new” methods of fishing to increase the salmon catch. It is those new methods of fishing that have Native American fisherman Johnny Eagle (Anthony Pena) opposed to the cannery and hiring a lawyer because he believes the town is in violation of the fishing rights negotiated with his tribe. 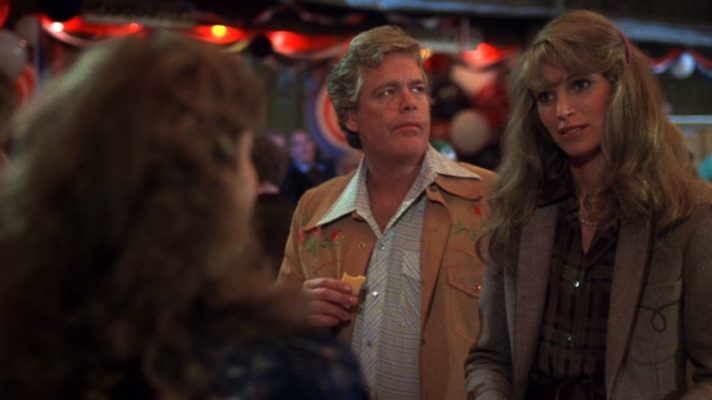 But Johnny is fighting an uphill battle, as most of the townsfolk are in favor of the cannery, including well meaning, but lunk-headed fisherman Jim (Doug McClure) and local bully Slattery (Vic Morrow). Johnny and Slattery engage in an escalating feud that goes to the extremes of the murder of Johnny’s dog and Slattery burning down Johnny’s cabin with a particularly explosive Molotov cocktail.

And then the humanoids crawl out of the ocean and start raping women and killing men. 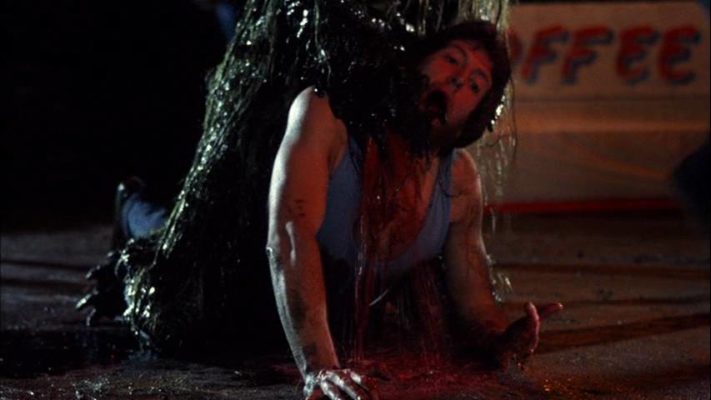 That is literally as abruptly as the film turns. Director Barbara Peeters and writer William Martin (credited as Frederick James) do try to create at least a little bit of buildup with an early scene of one of the (unseen at the time) creatures inadvertently causing the deaths of three fisherman through a boat explosion and tying the creation of the monsters back to the cannery’s methods of genetically modifying salmon to grow larger. But the film barely runs eighty minutes so the filmmakers have precious little time to do much character work or explore the conflict between the local Native American tribe and the insidious growth of American industry. There is fishman carnage and gratuitous nudity to get to, dammit!

I will give HUMANOIDS FROM THE DEEP this: it truly does deliver on what it sells. Mutated fishmen emerge from the sea in bunches and graphically claw chunks out of faces, backs, torsos, and—in a special moment—twist a man’s head clean off his body. The issue of why the monsters get all rapey when it comes to women is given a cursory explanation that is intended to serve as justification for the inclusion of what are clearly hastily shot inserts of naked women being pawed by monsters before they lay down on them and sort of wiggle about. 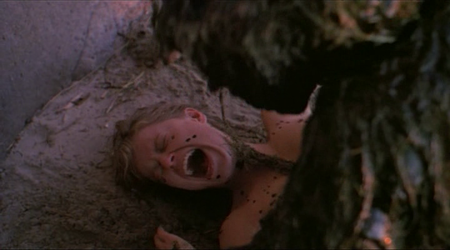 That is where the disconnect happens for me between the film’s reputation as a mean-spirited, graphic horror film and what I saw as a sloppy, silly B-monster movie grafted on to a socio-political drama. The scenes of the monsters raping the women are indeed distasteful and clearly motivated to ramp up the female nudity quotient of the film. The sequences certainly do not hold to the interior logic of the film since everyone is wearing jackets and stocking caps throughout, but then we cut to women in bikinis on the beach. The only reason for that (lack of) costume choice is that it presumably was easier for the men in the monster suits to rip the tops off the bikinis (as opposed to, you know, coats and shirts) when they probably couldn’t see through the masks. But while distasteful, it frankly is difficult for me to get that offended by these scenes when the movie surrounding them is so damn silly. 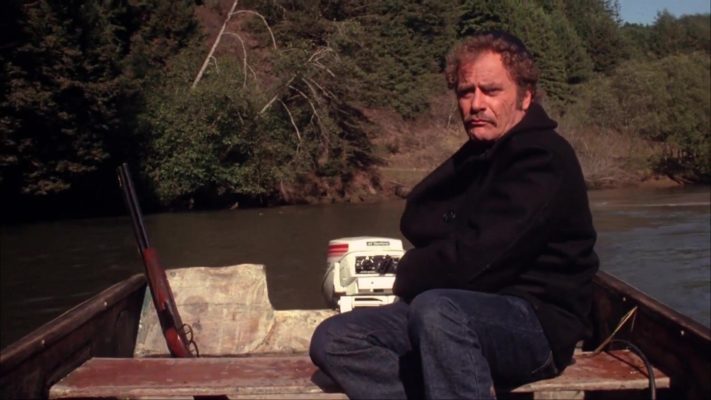 As far as the rest of monster carnage, it definitely livens up the second half but also completely steamrolls the interesting plot points set up in the first half and weirdly goes out of its way to redeem Slattery (a man who killed a dog, tried to murder Johnny, and freely used racial slurs about Native Americans). It also tries to focus on Jim as the hero in the film, but McClure is horribly miscast, looking alternately confused and disgusted by the movie he finds himself in, so his presence as a supposed “take charge” guy becomes laughable. Factor in the humanoids (an early creation of Rob Bottin) that look okay in shadow and quick cuts but, when given prolonged exposure, look like the men in rubber suits with seaweed hanging from them that they are and you get a third act that spins from fun to silly to overstaying its welcome in the course of a few minutes. 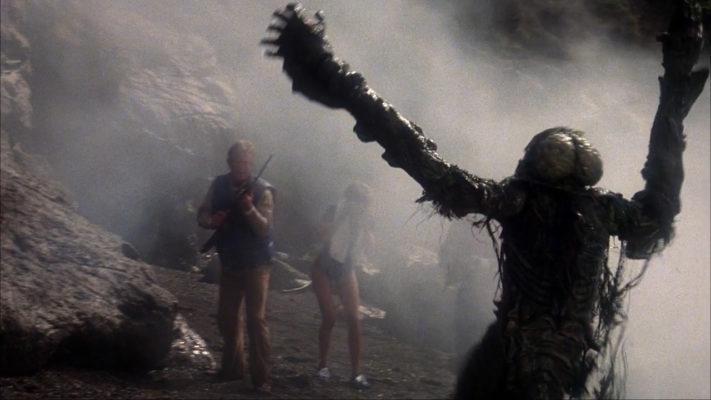 In a rarity for me, I did dig in a little about the production of HUMANOIDS FROM THE DEEP since IMDB lists as an uncredited co-director Jimmy T. Murakami. While Peeters refused to shoot the more blunt rape scenes that wound up in the movie, it appears that Murakami did not shoot those scenes either (that task fell to second unit director James Sbardellati), so I am not certain what he did on the film.

I am sure that Roger Corman (this was a New World Pictures production from 1980, so even though his name is not listed as producer, you can be sure he was very involved with it) loved the controversy that was caused by Peeters asking to have her name removed from the film after she saw the added rape footage. It gave HUMANOIDS FROM THE DEEP a reputation as something extreme or taboo when it really is just a middle-of-the-road Corman cheapie (with some interesting bits early on about the Native American-cannery conflict) that lacks the wit and subversive nature of so many of his ’70s productions. It is always watchable, but is hardly the transgressive work that I anticipated. 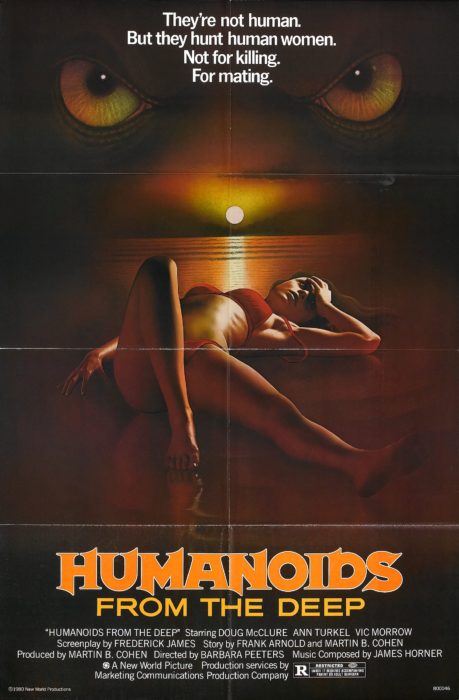