Devil possession films are a dime a dozen. Ever since the halcyon days of THE EXORCIST, we have been inundated with endless tales of people (not always, but generally, young teen girls) having their corporeal essences overtaken by slathering demonic beasties resulting in bumps in the night, salaciously giggled naughty words, and heroic men of the cloth stomping in to save the day, drawing their crucifixes as if they were guns in a HIGH NOON showdown. There’s not much new earth to be uncovered in these unhallowed grounds, tilled as much as they have been. We’ve filtered bible-quote histrionics through found-footage shakycam drama (too many times to count, really), we’ve explored the genre’s narrative beats through the prism of other religions (Judaism has given us three: THE UNBORN, THE POSSESSION, and the Polish-lensed DEMON), we’ve even seen the after-effects of what it’s like to have Beelzebub co-habitate with your very soul (AVA’S POSSESSIONS). Given the limited supply of storytelling strokes these things provide, what new wrinkle can any new possession flick hope to present?

Unfortunately, ALONG CAME THE DEVIL doesn’t break new ground in the satanic panic arena–even its name sounds cobbled together from bits and pieces of godlessness stolen from other films. Fortunately, it also does something that is rarely seen in this welter of blasphemy: it actually dares to be a good movie. Here’s the thing about this glut of devil possession yarns–more often than not, they are no good. Too busy chasing that post-Friedkin dragon, they simply wallow in cliche and substandard jump scares while bedraggled nubile girls croak out perverse sex line epithets at stoic priests. It’s not just the over-familiarity with these cliches that bog down the umpteenth form of this story, it’s the sheer asinine laziness with which filmmakers, seeking to cozy up to the discarded remnants of an all-time classic, assemble their shriek shows. 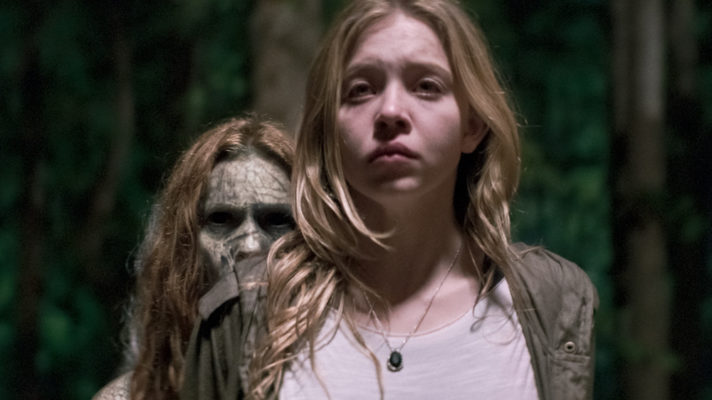 So it’s nice to see when a filmmaker actually takes the time to slow down and treat their story with a degree of respect. It’s not that ALONG CAME THE DEVIL is a perfect or great film–there are a few too many scenes of clunkily-acted drama, a few too many lines that come off as tin-eared, and first-draft suspect spread throughout the film’s brief, sub-ninety minute runtime–but it’s still a solid middlebrow creeper, effectively backgrounding the demonic menace and concentrating on a coming of age story that allows the scares to work both as funhouse spook blasts and metaphorical charges about what it means to grow up in the shadow of trauma and loss.

To be fair, there will be many a horror fan who’ll hate the measured pacing of Jason DeVan’s creeper. The most apparent comparable title here is, actually, THE BABADOOK, with its slow-burn grief-streaked metaphorical scariness. For every fan of that film exalting it online, there’s another piping up about how it’s “overrated,” and I think those particular people aren’t going to be down with the almost glacial creep of DeVan’s feature. That’s not to say that ALONG CAME THE DEVIL is on par with that Aussie bad dream, but it engages in the same kind of humanistic drama over stock stereotypes and ghost-pulp cliches.

Ashley (Sydney Sweeney) has grown up knowing nothing but pain and sadness. When her troubled mother dies, she’s forced to grow up suffering the whims of an abusive father until her matriarchal aunt (Jessica Barth) takes her in. But being given a stable home life does nothing to quell Ashley’s distraught psyche, as she searches for longing, for something to fill her–for a connection to her deceased mother. And something out there knows she is searching.

When Ashley runs into an old childhood friend, the Goth-y Hannah (Madison Lintz), she begins to find some semblance of belonging on this plane of existence, welcomed into a group of friends and developing a tender rapport with a resident hunk (Austin Filson) who takes a liking to the strange young lass. Yet Ashley is tormented by strange visions just out of reach–spooky shadows in the corner of her eye and eerie, barely glimpsed hallucinations of her mother. Hannah proposes a seance to reconnect Ashley to the spirit of her mother, only to bring something infernal to the fore.

It takes over half of ALONG CAME THE DEVIL before that seance happens, which, in a lesser film, would prove to a be major momentum-stalling buzzkill. But DeVan has something deeper in mind here, wanting us to get to know and understand our poor targeted heroine as he surgically builds up the demonic presence around her. We are fully immersed in Ashley’s pain, seeing her as she tries to come to grips with her lingering trauma while also juggling the normal hormonal demands of pubescence–AND a demon skulking in the shadows nearby.

It’s mostly do to to Sweeney’s immensely sympathetic performance that we are on board with Ashley’s journey to the damned through this part. It’s an incredibly difficult role for such a young actor, yet Sweeney handles it with aplomb, investing us in the daily life and struggle of our young supernatural hostess. It’s through her performance and DeVan’s decision to subdue the more emphatic elements of this particular tired subgenre that we begin to piece together that this is really a film about the ways in which trauma “possesses” us, takes us over, and haunts us if we don’t learn how to process it (admittedly, a somewhat obvious metaphor, but one still effectively utilized here).

The film doesn’t really build in urgency as it goes along–the exorcism is not that kind of go-for-broke cathartic release that such a stately film could have probably used–and, as such, it can drag from time to time, especially in the moments when the greenhorn director/writer (he co-wrote the script with his wife, Heather) lets the hokiness of his dialogue get away from him. The actors, not even Sweeney, are unable to bring life to the clanging sounds in these moments, but luckily they are few and far between. That said, there is something to be said about a film that does its subgenre, if not uniquely, then at least with thoughtfulness and a desire to be better than the norm. Some fans expecting a more eventful pea-soup shower may be disappointed, but there’s a certain integrity to ALONG CAME THE DEVIL that makes it worth being haunted by.

ALONG CAME THE DEVIL is in theaters and available on VOD starting today. 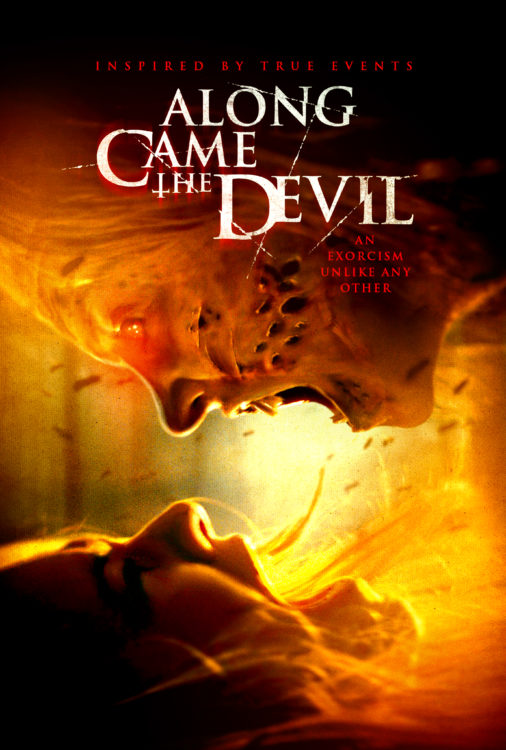