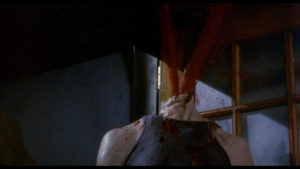 When I was in film school, one of the exercises given in my first production class was to take a series of shots that had nothing in common and edit them together to make a cohesive story. As expected, everyone in the class (including me) struggled to come up with anything actually watchable, but a few hearty souls (not including me) managed to cobble together short films that made a little bit of sense. NIGHT TRAIN TO TERROR feels like that exercise taken to its logical extreme as a feature film. Much like the few resilient students in my class that figured out a way to pull their random footage together into something approaching a story, producer/director Jay Schlossberg-Cohen turned in a film that sort of makes sense if you squint your eyes and turn off your brain. But that does not mean it is watchable. 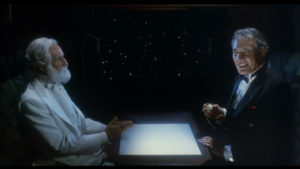 In a sense, NIGHT TRAIN TO TERROR is a horror anthology that cheats (more on that cheating business in a moment). On an overnight train to Las Vegas, God (Ferdy Mayne) and the Devil (Tony Giorgio) hold a summit meeting of sorts to determine the fates of various people who fall into a grey area where good and evil intersect. This flimsy premise is the excuse to cut to the individual tales.

Oh, did I mention that the train is scheduled to crash at dawn, killing the cheeseball pop band that for some reason is performing a musical number in one of the train cars and that their performance is cut together to look like a bad music video? I didn’t mention them? That’s because their musical interludes take up almost ten minutes of screen time, but are strictly there as filler. If I have to listen to the same pop song over and over in the film, the least the producers could have done was to hire a better songwriter. 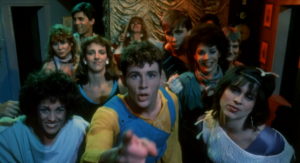 NIGHT TRAIN TO TERROR is known—if at all—for its use of footage from other exploitation films to tell the individual anthology tales. Now, using footage from other films to tell a new story is not a completely new concept. It has even been done in clever ways for comedic effect, like Steve Martin interacting with classic noir actors in DEAD MEN DON’T WEAR PLAID or as flashbacks to flesh out Terence Stamp’s violent protagonist in THE LIMEY by using footage of him as a young criminal from POOR COW. Instead of trying to do something original with the old footage, Schlossberg-Cohen simply takes two exploitation films that had been released a few years earlier (and footage from a film that was actually finished years later—seriously) and re-edits them down to the barest of plots, but making sure to keep every bit of sex and gore.

I don’t normally like to do too much research into how the films in this column came to be made because I would prefer to watch and write about them simply on the terms of how they hold up now. I do not want to be swayed by how difficult or fast the production was. But with this film, I had to dig in a little to find out what films were re-edited. I discovered that all of them were written by Oscar-winning screenwriter (for BROKEN LANCE) turned one-man schlock factory Philip Yordan (writer/producer of previous My Exploitation Education entry BLOODY WEDNESDAY) and that the footage used for the first story was from an unfinished film that was known at the time as SCREAM YOUR HEAD OFF but was later finished in 1992 (!) as MARILYN ALIVE AND BEHIND BARS. 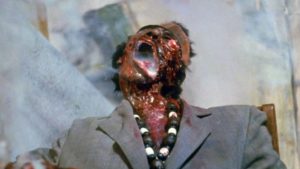 I suppose the nicest thing I can say about this most shameless of all exploitation cheapies is that it takes CATACLYSM—a film I had seen in full under the title THE NIGHTMARE NEVER ENDS—and actually makes its story more coherent by cutting out most of its exposition.

And that’s it. That is the only nice thing I can find to say about NIGHT TRAIN TO TERROR. I normally try to find something constructive to say about every film I review, but sometimes I run across something that is such total garbage that I cannot be bothered to make that effort. This is one of those films.

Leave aside for a moment the re-editing of other films to make this “new” film on the cheapest of cheaps. The newly shot wrap-around footage is lazily done and provides no suspense or sense of surprise. We are told in the first five minutes that the train is going to crash at dawn killing the obnoxious pop band. I assumed there would be some sort of twist to this plot that illustrated a point about the ability to change events that are “fated” to happen. That turned out to be giving Schlossberg-Cohen and Yordan too much credit. The train wreck plot is just there to give a shapeless movie an end point.

The re-editing of the films to create a new one is ethically dubious—at least, it is to me. Schlossberg-Cohen has used the work of other directors, actors, and crews for his own financial benefit, but those people who worked on the original films almost certainly did not get paid for their efforts being used as a double-dip. Maybe I am being ridiculous when it comes to such concerns about a truly grade-Z film, but I cannot help but feel that the original version of CATACLYSM was far more entertaining when it had all of its strange, nonsensical exposition included between scenes of extremely rough stop-motion monsters and gory surgeries. I’m sure the same goes for DEATH WISH CLUB which looks like the kind of batshit insane horror/sexploitation mash up that would be right at home in this column. Instead, NIGHT TRAIN TO TERROR serves up what I am sure is a less crazy version of the original film just to line the pockets of Schlossberg-Cohen and his fellow producers. 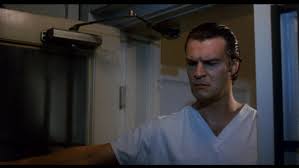 I could rant for several more paragraphs, but what would be the point? I suppose NIGHT TRAIN TO TERROR could be of interest to audiences who find it an interesting experiment in film editing or for the five or six people interested in seeing what a pre-Night Court Richard Moll was up to (he appears in the first and third segments). But I would strongly advise against it. Instead, track down the original films. They may not be any better, but at least they exist in a form the original filmmakers intended.

For a more positive take on NIGHT TRAIN TO TERROR, you can check out Paul Freitag-Fey’s excellent review of the film’s 2013 Blu-ray release here. 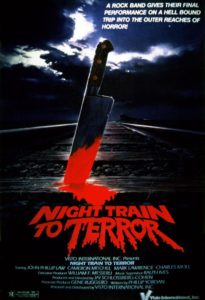