I sometimes forget that every violent murder mystery made in Italy from the mid ’60s to around the mid ’90s is not really a giallo. Just because a film features killer POV shots, an unseen murderer slicing up their victims, bad dubbing, and incoherent character behavior does not make it a giallo. It takes talent to elevate a film from a sleazy slasher flick full of naked female victims to something akin to art.

Mario Bava had that kind of meticulous attention to the fetishistic details of the genre (stylized lighting and shot composition, a hook for the killer—say black leather gloves or a creepy mask, a swooning score that also manages to sound sinister, and an intense focus on the violent acts when they occur). Picking up the torch from Bava, Dario Argento perfected the aesthetics of the genre in an astonishing fifteen year run, Lucio Fulci weaponized it for use against the hypocrisies of religious and political institutions, and Sergio Martino used it to explore the chaotic lives of troubled, often adulterous protagonists. Antonio Margheriti, Sergio Corbucci, Massimo Dallamano, Giuliano Carnimeo, and many other genre filmmakers adopted elements of the genre to give a bit of stylization to their otherwise standard-issue genre fare, but they did so with solid craftsmanship, creating something that could be referred to as the pseudo-giallo.

I suppose it is then understandable that when I stumble across an Italian horror film from 1971 that I have never seen that is about a killer stalking the patients of a high-end mental health facility, I would expect it to at least fall into the pseudo-giallo category. Alas, that is not the case with SLAUGHTER HOTEL (a.k.a. LA BESTIA UCCIDE A SANGUE FREDDO, ASYLUM EROTICA, and many other titles).

A mansion in the countryside has been converted into a retreat/rehab facility for wealthy women showing any number of varied symptoms: there is Cheryl (Margaret Lee), who is being treated for depression following a suicide attempt and has developed a romantic fixation on her doctor (Klaus Kinski); Anne (Rosalba Neri) is an incurable nymphomaniac (because it’s Italy in the ’70s and any woman with a sexual appetite must not be right in the head); Mara (Jane Garret) is suffering from amnesia and shows signs of being agoraphobic; and Ruth (Gioia Desideri) has spells where she unconsciously tries to kill people.

The doctors and nurses are just as thinly sketched out. Dr. Clay is the younger, idealistic physician with a sinister air about him since he is played by Klaus Kinski. Professor Osterman (John Karlsen) is relatively ineffectual, touting some new method of treating mental illness that seems to involve having his patients forced to socialize with each other every evening in the mansion’s lounge. Nurse Helen (Monica Strebel) is specially assigned to Mara to try to bring her out of her shell, but takes a sexual interest in her patient. I’m not an expert on medical ethics, but I am fairly certain that many of the character and plot points in the film aren’t exactly kosher when it comes to treating patients.

When the killer starts knocking off patients and staff with medieval weapons and torture devices that are on the walls of the mansion as decoration (It’s a mental health facility, why are there weapons on the walls!?), it seems like the film is going to take the turn into the type of violent whodunit that is the bread and butter of the giallo genre. Instead, co-writer/director Fernando Di Leo steers hard into sexploitation territory, getting most of the women in the cast out of their clothes at every opportunity. 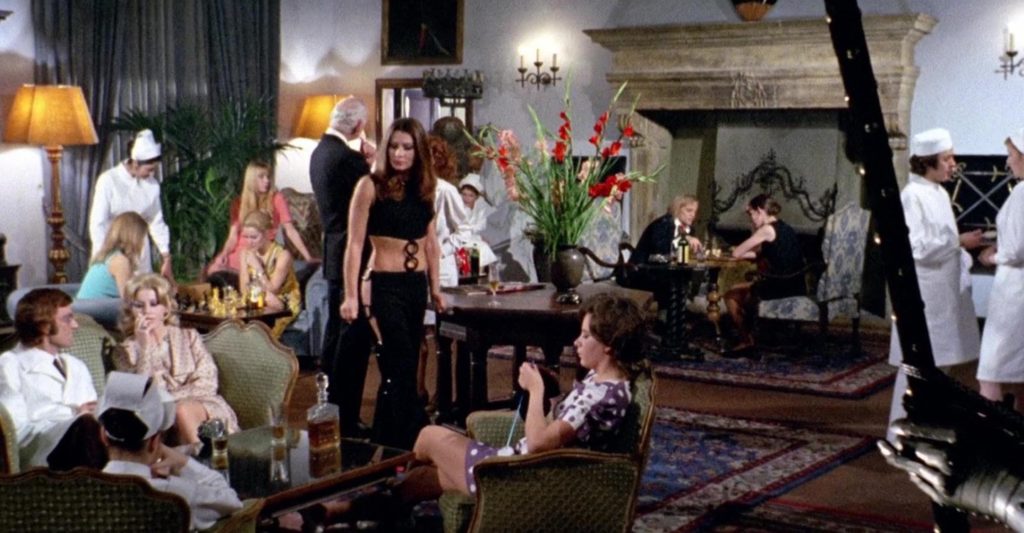 Even worse is that the film does not hold much interest as a slasher or whodunit. The obvious suspect—simply because he is played by Kinski—is Dr. Clay, but plenty of red herrings are present. But the fact of the matter is that I did not care about who was being killed, who the killer was, or why they were murdering people.

What Di Leo winds up with is a sexploitation film that somehow manages not to be sexy, a horror film that is not scary, and a mystery that is not that hard to figure out. The only entertainment value that is left comes from the accidental comedy of treating Mara as exotic simply because she is the only black character and an out-of-left-field ending that makes good on the promise of a slaughter in the title. But it takes nearly ninety minutes to get to that point.

I’m not sure how it is possible to make a film in early ’70s Italy about a murderer stalking beautiful women starring Klaus Kinski and have it feel like such a slog, but Di Leo found a way. I have said it before and I will say it again, the only rule an exploitation film should follow is: don’t be boring. SLAUGHTER HOTEL fails to follow that rule. 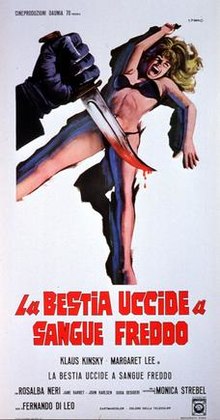