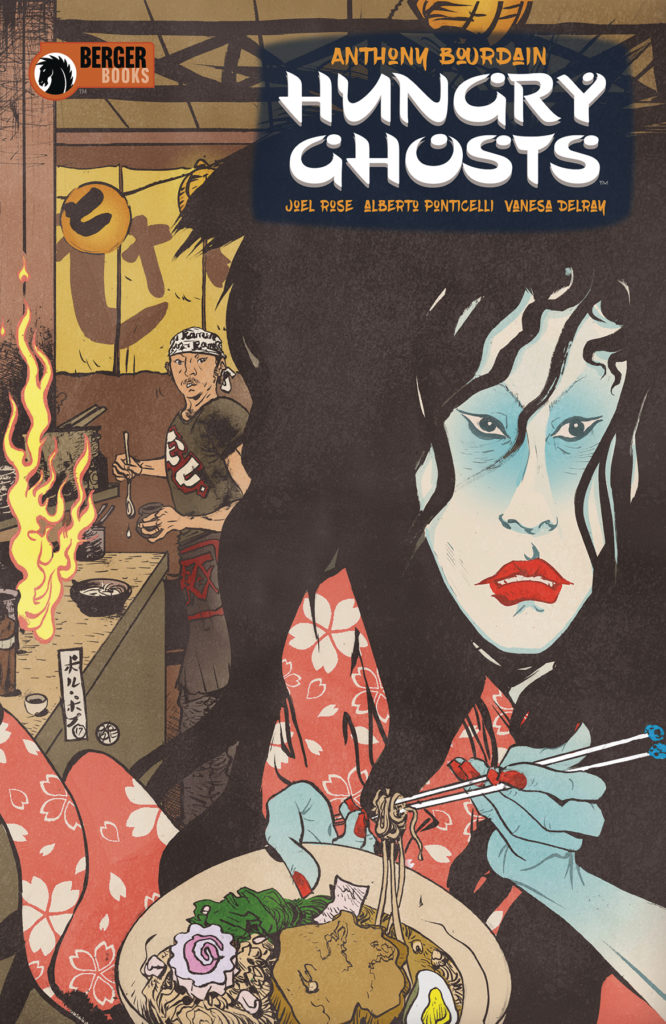 Anyone who knows me in “real life” knows that if there’s one thing I absolutely despise, it’s so-called “foodie culture.” Sure, I can appreciate the fact that there is a fair amount of artistry involved in good cooking and that a lot of chefs are doing their level best to promote worthwhile causes such as “farm to table,” eating local, etc., but come on — anyone with any sense of proportionality has to admit that the whole thing has gone too far. We’ve gone from having a couple of celebrity chefs on TV to having hundreds of the bastards, high-priced restaurants are popping up in every major city in the country in numbers that can’t possibly be sustained, food bloggers are tripping over each other for frankly lame “scoops” on the insular-bordering-on-incestuous culinary “scenes” in their towns — it’s absolutely out of control, and that’s before we even get into how flat-out gluttonous and offensive it is that people have the nerve to critique food on things like “presentation” while half the world is literally starving to death. Disappointed in the “flavor nuances” and “lack of seasoning” in the dish you just paid $50 for? Well,there are entire countries full of people that would gladly trade places with you and “suffer” through your tribulations, so kindly fuck the fuck off you fuckhead.

All that being said — if there’s one TV chef who doesn’t make me want to strangle him with a cord made out of pasta or ramen noodles, it’s Anthony Bourdain. In fact, I actually like the guy. I work an overnight shift on Saturdays, and many is the time all-night marathons of Parts Unknown on CNN have been all that stood between me and falling sleep on the job. Bourdain goes to interesting and exotic places, spends time getting to know the locals, and seems to genuinely appreciate the fact that he leads a life most people can only dream about. Yeah, my eyes do glaze over a bit when he gets into the minutiae of the ingredients in whatever dish he’s preparing and/or eating, but that’s usually all over and done with in a minute or two — plus, ya know, he’s got the advantage of being a comic book guy. 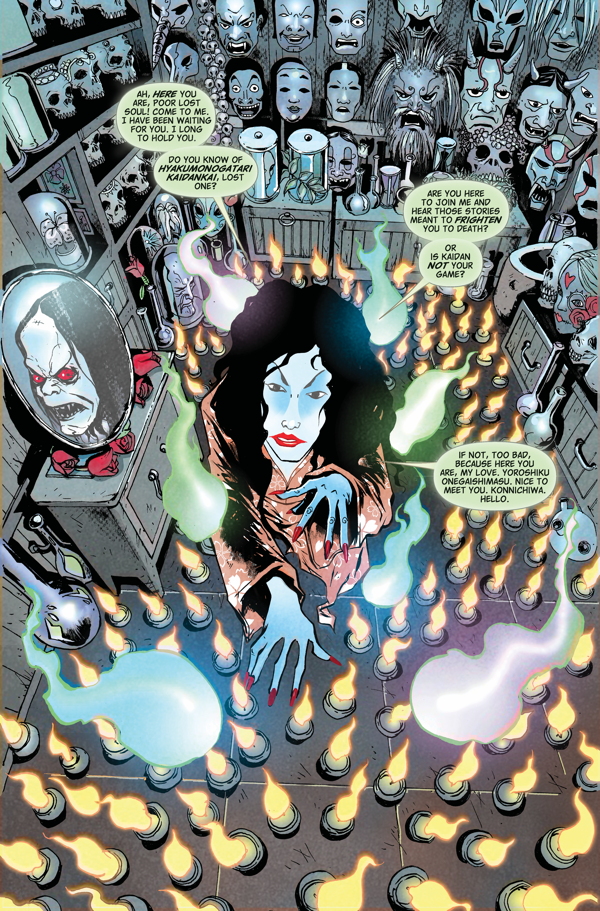 So, hey, if I were Vertigo founding editor Karen Berger, and I was launching my new Berger Books line at Dark Horse, having the imprimatur that Bourdain’s celebrity provides on the cover of very first comic I put out? That’s something I would definitely go for. And yeah, I’d probably give his name top billing, even over the title of the book itself. And so, from a business, maybe even a creative, perspective, everything about the new four-part horror anthology Hungry Ghosts makes sense. Joel Rose, who co-wrote the Get Jiro! graphic novels with Bourdain, is back in the same role (that being, I’m guessing, the guy who does the lion’s share of the actual work), and Berger has assembled a murderer’s row of artistic talent to illustrate these tales, with the first issue alone featuring Alberto Ponticelli and Vanessa Del Rey on line art, the incomparable Jose Villarrubia on colors — heck, even Paul Pope on hand to provide a truly stunning cover. Surely a team this star-studded is bound to produce something special, is it not? In fact, if I were a betting man, I’d wager that this basically had no choice but to be a damn good comic.

I guess it’s a good thing that I’m not a betting man, then, because against all odds, Hungry Ghosts #1 is a decidedly mediocre read. I certainly dug the introductory framing sequence, a modernized take on EC-style “openers” with an international spin that sees our nameless horror hostess drop us off, figuratively speaking, at a Russian oligarch’s privately-commissioned feast prepared by a gaggle of top chefs who decide to while away their time in the well-appointed kitchen by indulging in a culinary version of HyakumonogatariKaidankai, essentially the Japanese Samurai equivalent of everyone sitting around the campfire and trying to one-up each other by telling progressively more frightening ghost stories. And that’s where things kinda fall off the rails. 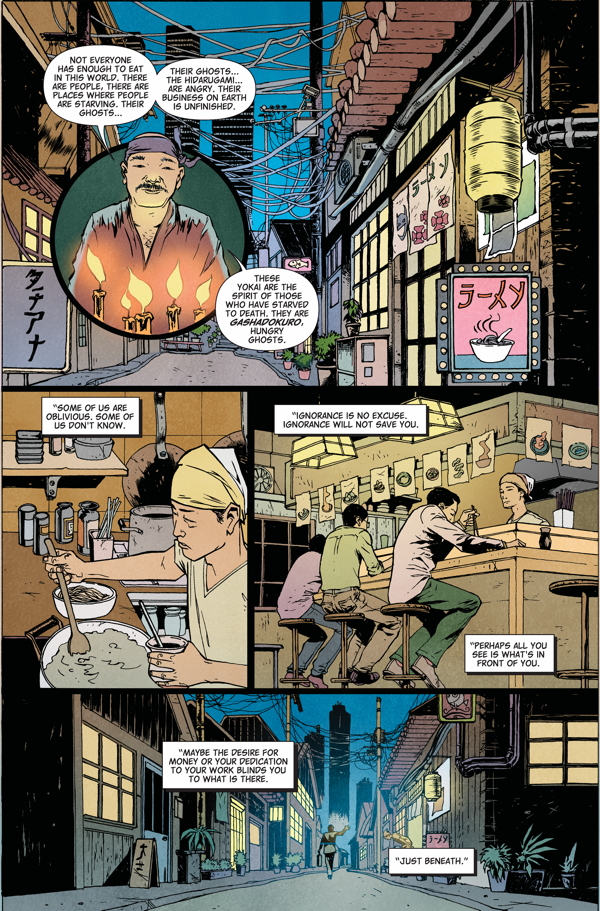 Certainly none of the fault here lies with the artists — Ponticelli’s gritty style suits the opening scene and the first story, “The Starving Skeleton,” to a proverbial “T,” and Del Rey’s lush and expressionistic visuals make the pages of “The Pirates” absolutely sing, while Villarrubia’s palette expertly shifts to underscore the varied, but equally visceral, styles of fright each yarn attempts to deliver. Unfortunately, those attempts come off as half-hearted at best, with “The Starving Skeleton” being a standard-issue morality play (chef won’t serve a starving homeless guy who enters his restaurant after closing time, said starving homeless guy is then revealed to be a spectral, skeletal wrath who consumes chef — which makes you wonder why he ever found himself going hungry in the first place?), and “The Pirates” being a high-seas take on castration horror clearly inspired by Matt Cimber’s THE WITCH WHO CAME FROM THE SEA, but nowhere near as good, and featuring an unfortunate woman at its center who somehow manages to bite the cocks off literally dozens of men, one at a time, in the same ship’s cabin — with none of them turning on her until all is said and done, even though you’d think the screams of pain and spurts of blood might, ya know, clue these scurvy guys lined up to be “serviced” by her that something was maybe wrong. Clearly, then, neither tale of “terror” was all that well thought out beyond the “gotcha” moments in each. 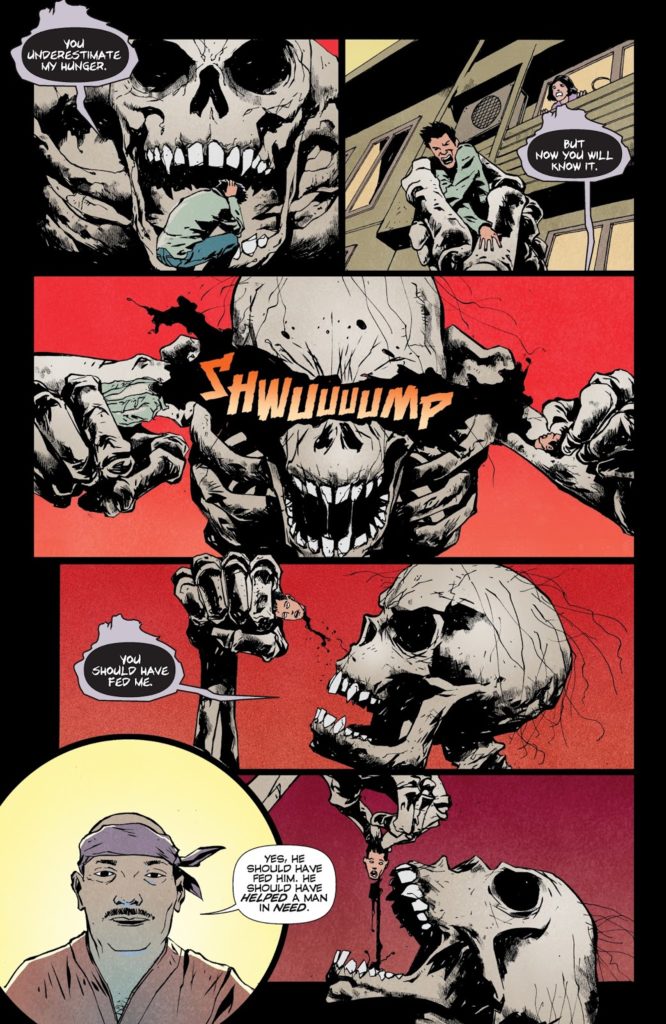 Which could certainly be forgiven, at least by me, if they offered something else, something greater or at least “other,” than most quick-fire scary stories do, but this is some seriously bog-standard stuff in the extreme. The principal of escalation inherent in the set-up of the “game” these chefs are playing makes me think — or at least hope — that better things are in store as the series progresses, so I’ll probably stick it out for at least one more issue, especially since Berger’s track record is as close to “unblemished” as a veteran editor’s can possibly be, but Hungry Ghosts #1 is far from an inspiring debut for a mini-series, let alone for an entire new (and much-publicized) line of comics. It wouldn’t be fair at all to say it leaves a bad taste in your mouth or anything of the sort — but it is surprisingly unsatisfying, even for an appetizer.