Despite the fact that I have a tendency to keep writing about ‘em, I don’t really consider myself a video game person. The newest console I own is a Playstation 3, and that has mostly been used for playing Portal 2 and Grand Theft Auto 5. When it comes to keeping up with anything that’s happened in the world of video games after 1997, I’m at a loss.

That said, I’m still fascinated by the history and creation of games, even if I don’t really do a lot in terms of actual playing. I may not have the time and energy to devote to their actual execution, but the mechanisms as to how games are put together is what drove me to be interested in PLAYING HARD, a new documentary from director Jean-Simon Chartier about the creation of Ubisoft’s well-received fighting game For Honor, which quickly became something of a gaming phenomenon after some initial hurdles from its release last February.

PLAYING HARD follows the creation of For Honor from its inception, as creative director Jason Vandenberghe pitches his game to the company, through its eventual release, primarily using Vandenberghe as a touchpoint. It’s Vandenberghe’s journey as much as it is the game’s–a new, non-franchised video game from a major company being fronted by a man who has been dreaming of putting together this game since childhood. The personable and enthusiastic Vandenberghe makes for a compelling figure, and a natural to follow. 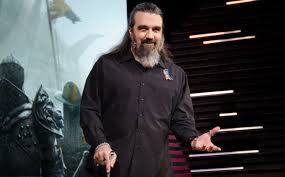 Vandenberghe certainly serves as a fine centerpiece for the film, openly serving as a narrator of his own story, and making very honest proclamations in regards to how the game is going and what it means to him. He’s certainly a rootable, identifiable figure, and the energy he feels towards the project is infectious. He’s also refreshingly self-aware, noting that his appearance (at one point he jokes about being “profiled” when pulled over and asked if the cane he uses to walk carries a sword) and general demeanor can sometimes make him seem more intimidating than he’d like to be.

It’s partially Vandenberghe’s natural charisma that makes PLAYING HARD occasionally frustrating.  While Vandenberghe is the center of For Honor’s story, we rarely get much insight into how he is actually perceived by others. The development team working on the game is given minimal screen time, and when Vandenberghe feels as though he’s being pushed out of the game’s development, we’re not given any concrete reason why. As beneficial of the access to Ubisoft’s game development process Chartier and his crew are, it’s a bit of a tease, as we’re rarely given any insight into the actual decision-making process that would have made PLAYING HARD infinitely more compelling.

PLAYING HARD doesn’t really allow much insight into the development process either. While we get a good sense of how the mechanics of and ideas behind For Honor work, we’re shown how they get put into action only in bits and pieces. While we do get a good insight into the game’s launch (and the minor technical issues involved), actual hurdles to the game’s release are seen only sporadically, such as the decision to take out a split-screen mode in order to ensure that the release date is met. The day-to-day issues that arise when producing a game of this size are generally ignored. (A cursory search of For Honor on Kotaku brings up a number of potential issues the game had upon its release, and it would have served as interesting material had any of these issues come up during the development process.)

As a result, PLAYING HARD occasionally verges on being a puff-piece for For Honor, and while it never becomes promotional material (and should certainly be fascinating for fans of the game), it’s also not quite the deeply compelling look at the video game creation process that it could have been. It’s an interesting film thanks to the charismatic presence of Vandenberghe, and it did make even a non-gamer like myself interested in playing the game, but it probably won’t be particularly memorable to anyone outside of those already on board For Honor’s platform.