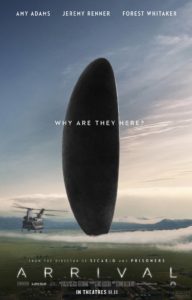 When twelve alien ships suddenly appear all over the globe, linguist Dr. Louise Banks (Amy Adams) is enlisted by the government to attempt to communicate with the creatures that landed in the midwest. Joined by physicist Dr. Ian Donnelly (Jeremy Renner), Banks manages to make progress but the operation is threatened by the tensions between governments of the world and the pervasive civil unrest that follows in the wake of the arrival. ARRIVAL is an intelligent, mature and emotionally affecting science fiction feature. It’s frankly a miracle that it was produced by a major studio in the current climate of superhero blockbusters and endless sequels. Amy Adams is perfectly cast and leads an ensemble of great performances, and Denis Villeneuve proves again that he’s one of the best and most interesting directors working at this level. Anyone with reservations about his upcoming BLADE RUNNER sequel may well change their minds after this. 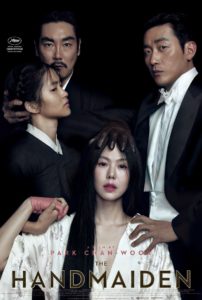 Sook-Hee (Kim Tae-ri) is hired to be the handmaiden of the beautiful but reclusive Lady Hideko (Min-hee Kim), a Japanese woman who has grown up in her uncle’s large manor in Korea. But Sook-Hee is actually working in tandem with con man Count Fujiwara (Jung-woon Ha), who is scheming to marry Hideko and abscond with her father’s vast fortune. Sook-Hee’s job is to help Hideko fall in love with Fujiwara, but the situation becomes even more complicated when Sook-Hee falls in love with Hideko. THE HANDMAIDEN is a spectacular return to Korean cinema after Park’s English-language debut STOKER. Adapting Sarah Waters’s novel FINGERSMITH, director Chan-wook Park has created an intricately designed puzzle box of a film that deftly combines period drama and erotic thriller. It’s also surprisingly funny and unafraid to be swooningly romantic, all shot through with Park’s trademark stylish direction. The cast is brilliant, and the costume and production design is stunningly gorgeous. In a career that has already included more than one certified classic, THE HANDMAIDEN stands out as one of Park’s best. 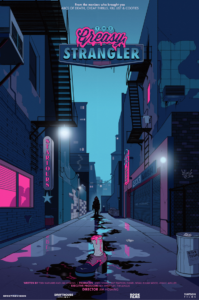 The experience of watching THE GREASY STRANGLER is roughly akin to being locked in a room with a very enthusiastic 14-year-old theater kid who was just shown an episode of TIM & ERIC AWESOME SHOW, GREAT JOB!, thought it was the funniest thing they had ever seen, and spends about 93 minutes repeatedly retelling to you everything that happened in the episode while the song “Daddy Would You Like Some Sausages?” from FREDDY GOT FINGERED plays on a constant loop. It’s a shameless lift of those references’ sensibilities with no understanding of what made them so interesting and unsettling. Instead, THE GREASY STRANGLER constantly milks the same handful of “jokes” over and over again: some guys have big penises, others have small ones, disco is inherently funny, sometimes people who don’t look like people in Hollywood studio movies are naked and have sex with each other, saying the same thing over and over again will eventually make it funny, etc. If that sounds like something that would appeal to you, have at it. Anyone else would do better to watch one episode of AWESOME SHOW and decide whether or not they want to ever watch anything like that again first. 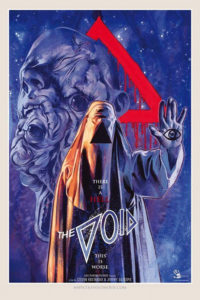 Police officer Daniel Carter (Aaron Poole) is almost done with his shift when he sees a man stagger out of the woods and collapse in the road. He gets the man into his cruiser and heads for the nearest emergency room, which happens to be the only thing left operational in the local hospital after a fire severely damaged the building. Carter’s estranged wife Allison (Kathleen Munroe) is running a skeleton crew, and shortly after Carter arrives a cult of white-robed figures and two men bent on killing the man Carter brought to the hospital arrive. But those are the least of their problems when they’re forced to defend themselves against an otherworldly threat. Directors Jeremy Gillespie and Steven Kostanski are two members of Canadian comedy filmmaking collective Astron 6, and it’s no surprise they’re so adept at creating truly horrific atmosphere–even some of Astron 6’s comedy is really disturbing. In some ways, THE VOID is a familiar siege horror film with characters barricaded in one location and dealing with threats from inside and outside. What sets it apart are its absolutely incredible practical monster effects and a grasp of what makes Lovecraftian horror so unsettling. This captures the feeling of that style better than anything since FROM BEYOND. In world where “Hello Cthulhu” exists, THE VOID brings terror back to cosmic horror.

Tags: Arrival, The Greasy Strangler, The Handmaiden, The Void