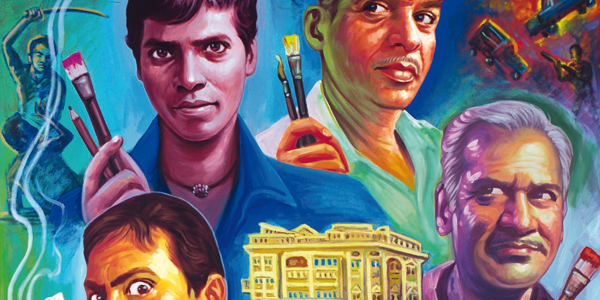 The rise of collectible screen prints and movie posters over the last decade or so has happened in conjunction with the growth of the Alamo Drafthouse brand–and, by extension, Fantastic Fest–so it makes perfect sense that a film about the art of American movie posters would have its premiere here in Austin. Kevin Burke’s 24×36 covers the history of movie poster and promotional art from before the invention of motion pictures all the way up to the present with the annual Mondo Con. The bulk of the film is interviews with artists, historians, collectors, gallery owners, and many others who offer a view into a different facets of the form’s history and process. It’s most interesting when it covers poster art up through the 1980s and feels a little heavy on the most recent past, but it’s packed with fun stories and information throughout.

In the last movie theater screening 35mm prints in Mumbai, the last handpainted poster artist and his assistants create huge billboard murals to draw in audiences. The business seems to be on its last legs, though, and it seems the art of film projection and poster painting is doomed. ORIGINAL COPY follows the staff of the Alfred Talkies theater as they struggle to keep their doors open and keep the classic experience of moviegoing alive. Watching the process of creating one of the billboard posters is amazing, although it’s a little tough to tell how much time passes in the film to get an idea of just how long it takes to paint it. The interviews with the managers and artists are fascinating but also sad: it’s clear everyone has an enormous amount of love for the theater and for movies, but it’s also just as clear that it’s an uphill battle for them to stay afloat.

Adele (Erin Wilhelmi), a young woman living with her pregnant mother and her mother’s lecherous boyfriend, is sent to care for her agoraphobic aunt Dora (Susan Kellerman) in her imposing Victorian home. Dora refuses to leave her room, communicating mostly through handwritten notes slipped under her door. When Adele meets Beth (Quinn Shepherd) while out running errands, the two young women strike up a friendship. But Adele’s restlessness and Beth’s influence cause Adele’s relationship with Dora to change, possibly setting them on a tragic course. SWEET, SWEET LONELY GIRL recalls 70s “psychotic women” films, but unlike other recent throwbacks to that era it is more tonally reminiscent of regional horror films from the 70s and early 80s like THE FOLKS AT RED WOLF INN and DON’T LOOK IN THE BASEMENT. It’s much more artful than that comparison might suggest, though. The simple but effective score and gorgeously autumnal look of the film, as well as a pair of solid, understated performances by Wilhelmi and Quinn all help to create a powerfully creepy atmosphere.

Several bodies are discovered in a home in a small town in Ohio, including a woman (Olwen Kelly) partially buried in the floor of the basement. The local police are baffled and take the body to the funeral home run by Tony Tilden (Brian Cox) and his son Austin (Emile Hirsch) for an autopsy. The clock is ticking and the police need a cause of death before the press can get hold of the story and start a panic, but as the men begin the procedure they find increasingly strange things in the body that they can’t explain. As a violent storm rolls in and traps the men in the basement of the funeral home, even more inexplicable events threaten their lives. Director André Øvredal (TROLL HUNTER) wrings this setup for all it’s worth, creating a series of scare set pieces that work much more often than they don’t. That said, there are a few familiar problems with the story and structure here, including a mostly superfluous love interest and an overreliance on shrieking jump scares. The relationship between Cox and Hirsch provides the film with a strong emotional center, though, and there are plenty of fun twists. A funeral home and morgue are already great places to set a horror movie, but THE AUTOPSY OF JANE DOE ups the ante with one of the most remarkable interior locations in a horror film in recent memory. It was honestly disappointing to find out during the Q&A following the film that it’s not a real location!

To say that THE LURE is “unique” is a severe understatement: It’s a musical about man-eating mermaids who look like teenage girls getting a gig singing backup with a low-rent bar band in the early 1980s. It’s actually even weirder than it sounds, but eventually that works against it. The first hour or so is breathtakingly off-kilter, packed with both low-key songs and one huge dance number that could have been pulled from a big-budget Bollywood movie. It’s somewhat disappointing when the plot meanders off into a number of directions without any real payoff in its final act. Still, despite its unsatisfying finale, THE LURE is unlike anything else out there and proves that Smoczynska is definitely a talent to watch.

Sophia (Catherine Walker) enlists occultist Joseph (Steve Oram) to assist her in an extremely difficult and protracted magick ritual, one that will take months and which requires the two of them to stay inside a house together for its entirety. Joseph balks when they meet, but when Sophia reveals her true intentions for wanting to perform the ritual, he reluctantly agrees. As they seal themselves inside the house and begin the rites, reality seems to break down and the nature of their relationship fluctuates dangerously as the fragile nature of their progress is constantly threatened by forces they cannot comprehend. A DARK SONG is a claustrophobic drama in horror finery. Walker and Oram are the only people on-screen for nearly its entire running time, and they’re both excellent in a pair of emotionally and physically demanding roles. Debut feature writer/director Liam Gavin has crafted something truly unique here. There are countless films about the occult, but I can’t recall one quite like this. Making its world premiere at Fantastic Fest, A DARK SONG hopefully will not be overlooked in the avalanche of incredible programming at this year’s festival. This is one of the best genre films of the year.

Arlen (Suki Waterhouse) is marked “Bad Batch” and banished to a vast desert wasteland established for undesirables in Texas by the U.S. government. With only a backpack and a gallon of water, she is quickly caught by cannibals called the Bridge People and loses her right arm and leg before managing to escape and find her way to the comparatively peaceful town of Comfort. Her anger at the Bridge People unexpected leads her to cross paths with Miami Man (Jason Momoa) when he leaves the Bridge village to find his missing daughter. THE BAD BATCH is writer/director Ana Lily Amirpour’s follow-up to her acclaimed debut feature A GIRL WALKS HOME ALONE AT NIGHT, and while it’s obviously a very different beast it still feels like the work of the same imagination. Like her first film, this one follows a disparate set of characters inhabiting a vividly realized world whose paths cross in unexpected ways. Instead of building that world from silent films, horror, and spaghetti western influences, this time around it’s an amalgamation of 80s post-apocalypse and desert films. It’s deliberately paced and quiet, punctuated with an evocative soundtrack that helps enforce the idea that this world exists outside of any specific time period. It’s as odd and confounding as it is beautifully shot and designed, and like Amirpour’s first film it will probably only improve given more time to reflect on and rewatch it.

15-year-olds Conor (Alex Murphy) and Jock (Chris Walley) are best friends who look like, talk alike, and both have less-than-great single-parent families. They dream of leaving their small town, and when they see a news report about boatloads of plastic bags filled with cocaine start washing up on a shore following a major police operation, they make a plan to steal one and get rich selling it off. Most of THE YOUNG OFFENDERS follows the two boys on their leisurely trek to the beach, on the run from a seriously overzealous local cop who is determined to catch them for stealing bikes. It’s bright, loud, and profane, and for the most part it’s very lightweight fun but not terribly memorable. If you love watching teenage boys do dumb stuff and mouth off a lot, you’ll probably want to check it out; otherwise proceed with caution.