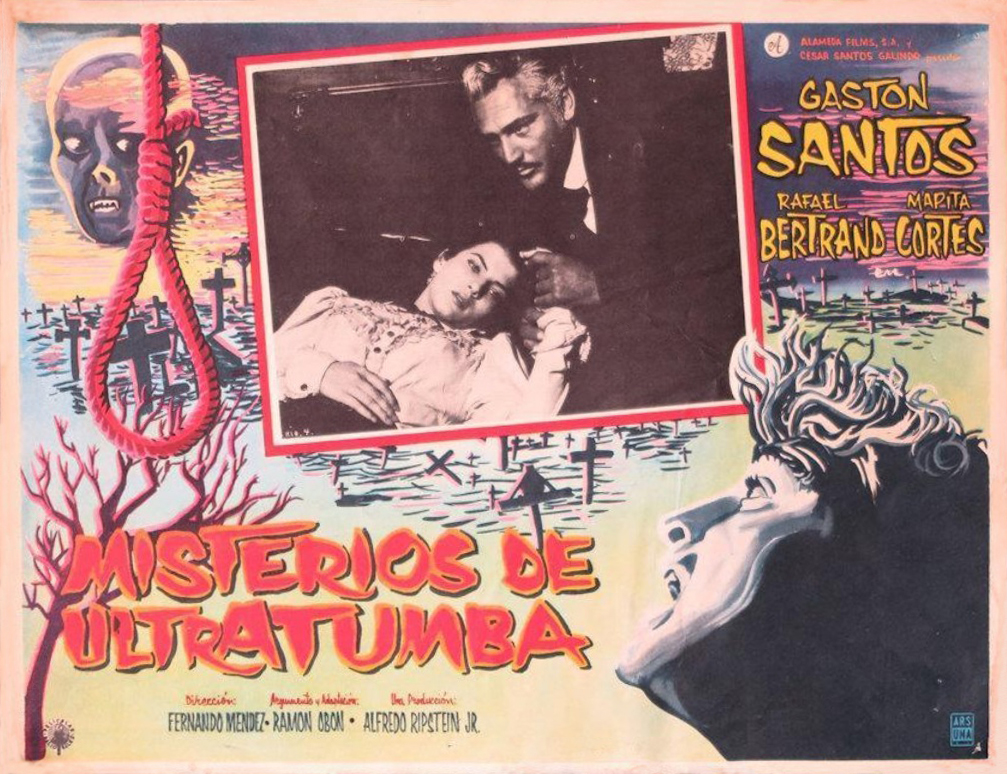 Each year Fantastic Fest spotlights genre cinema from a different country, and for the 2019 edition that country was Mexico. With the help of Abraham Castillo Flores, head programmer for Mexico City’s Morbido Film Festival, this year’s fest showcased a few classic Mexican genre films. Additionally, the fest hosted an incredible Miskatonic Institute of Horror Studies presentation by Flores on the history of genre cinema that was both densely packed with information and highly entertaining. Of the dozens of films Flores touched on in his presentation, three were included in this year’s Mexican sidebar, giving Fantastic Fest audiences the rare chance to see these gems on the big screen. 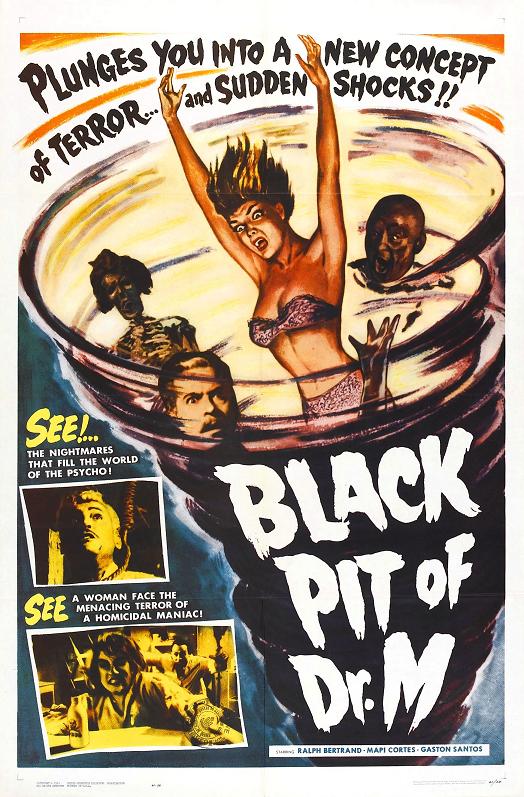 First up was 1959’s THE BLACK PIT OF DR. M (a.k.a. MISTERIOS DE ULTRATUMBA) directed by Fernando Méndez. Dr. Mazali (Rafael Bertrand) and his colleague Dr. Aldama (Antonio Raxel) made a pact that the first to die will find a way to get a message across from the afterlife. Specifically Mazali wants to discover a way to return from death and bring the secrets of the tomb back with him. Aldama dies and transmits a message through a medium warning Mazali that he will get the answers he seeks, but at an unthinkable price. Clearly influenced by the Universal horror cycle that kicked off with DRACULA, THE BLACK PIT OF DR. M is an effectively creepy gothic that features some great cinematography that takes a page from Val Lewton’s playbook. It’s bleak, chilling, and highly entertaining; it’s no wonder the film is considered one of the crown jewels of Mexican genre film history. 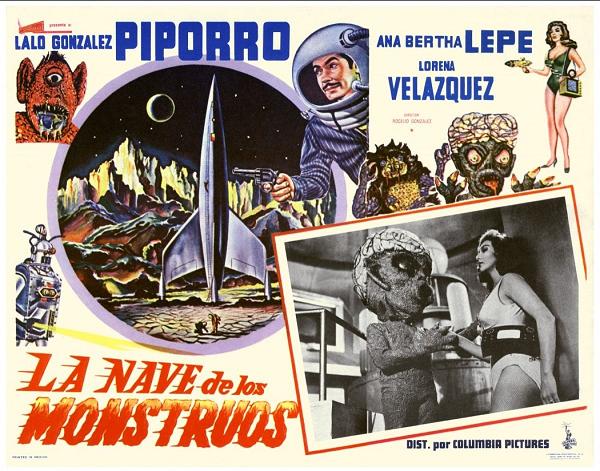 Switching gears, the next film in the series was THE SHIP OF MONSTERS (a.k.a. LA NAVE DE LOS MONSTRUOS) from 1960, directed by Rogelio A. González. Atomic science has somehow killed all the men on the planet Venus, so two Venusians are sent to scour the solar system for males to bring back. Gamma (Ana Bertha Lepe) and Beta (Lorena Velázquez) are not picky, and by the time they end up on Earth they have collected four monstrous male creatures from other planets. They were definitely not prepared for the raw sexual charisma of singing cowboy/compulsive liar Lauriano (Eulalio González), and their conflict over him spirals out of control until it threatens to unleash the monsters on Earth and enslave humanity. Deeply goofy and hugely fun, THE SHIP OF MONSTERS would fit right in with similar 1950s sci-fi B-movies from the States. The major difference is the “singing cowboy” angle (a mix of vastly different genres at which American studios would balk), and some slightly risqué dialogue that would never fly under the Hayes code. 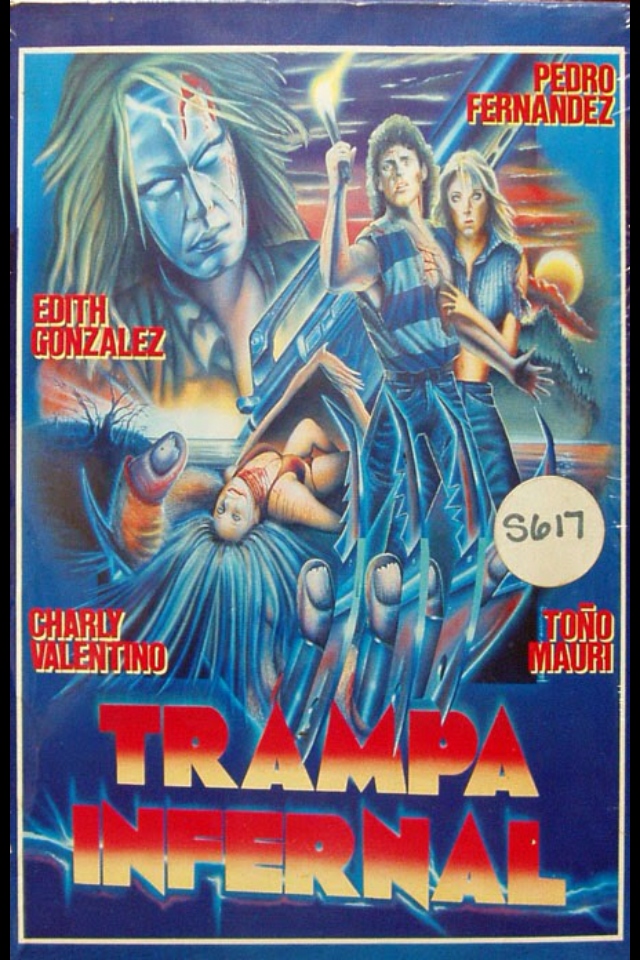 Finally, HELL’S TRAP (1989, a.k.a. TRAMPA INFERNAL) rounded out the Mexican genre sidebar with a slice of 1980s slasher horror mashed up with a “crazy Vietnam vet” story. A group of teens head out to a remote lake to hunt a bear that’s been terrorizing the area, but a creepy old guy who sells an impressive array of weaponry out of an old van warns them that there’s something more dangerous than wild animals. The lakeside area has become the hunting grounds for Jesse, a Vietnam vet who wears a white face mask (a la Michael Myers) with a luxurious wig of curly blonde hair while he kills whoever wanders into his turf with elaborate traps, bow and arrow, or whatever happens to be on hand (see also: Rambo). It’s pretty fun but more or less standard slasher fare other than the Vietnam angle (and that incongruously angelic wig), but it still makes for a good time with a game audience. 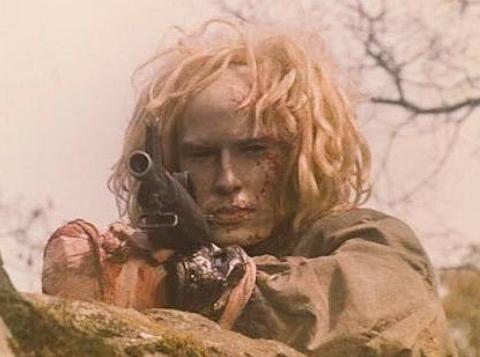