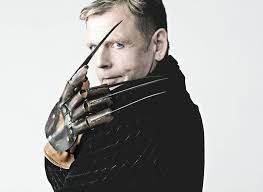 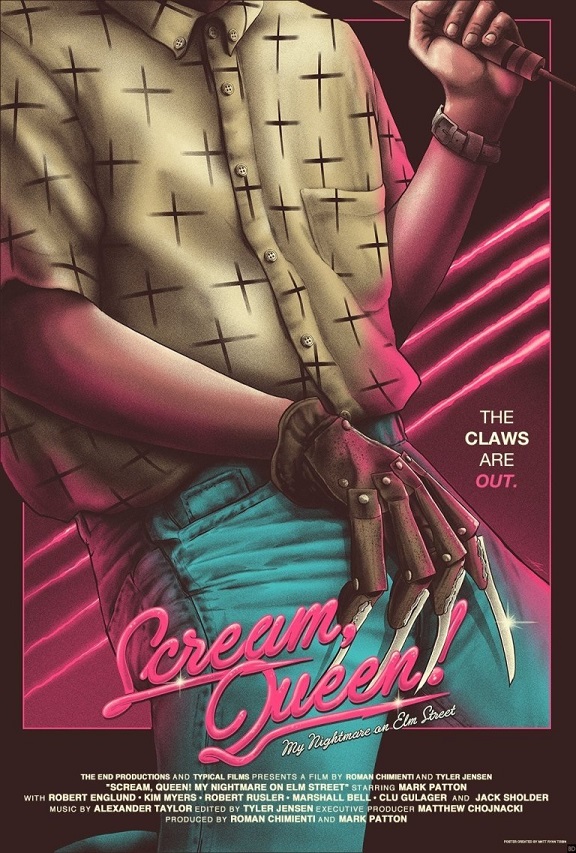 I came out as bi back in May, when my hometown celebrated its own Pride day a month before official national celebrations. It was just a few months before my 36th birthday, which means it took several decades plus for me to grapple with my own sexuality, my own identity, my own self-truth about who and what I am. I was bullied for being queer, for being a “f**” in my middle and high school days, long, long, looong before I was out. I was told by a bi woman, no less, and as early as just a few years ago, that, while it was okay for women to be bi, it was “unmanly” for men to be — that the idea of a man being with another man would render him unattractive, unappealing to women. At a party last year, I was grilled and mocked by my then partner about whether or not I was secretly gay, all because I dared to wear make-up to the event. I have spent most of my life afraid to embrace my own queer identity.

Which is what makes films like SCREAM, QUEEN: MY NIGHTMARE ON ELM STREET absolutely necessary. Its 2019, and, even with superficial successes such as the ability to marry whomever one wants, there are still barricades, obstacles, and difficulties place in front of the QUILTBAG community; even as I type this, the world awaits with baited breath on a Supreme Court ruling that could possibly allow businesses to discrimanate against gay communities on the shaky foundation of “religious grounds.” There are still large swathes of queer youth still afraid to crack open that closet door, scared of what will become of them when they do. Even in Hollywood, which claims itself a bastion of prgressive acceptance, celebrities are afraid to come out, lest in render them uncastable as leading men and women.

Such is what happened to a rising young star named Mark Patton. Patton had left home at 17, knowing he was gay from a young age, and unable to find a place for himself in his small hometown community. Landing in New York, he leveraged his youthful, blonde good looks into a career as an actor, landing commercial roles before working with the likes of Robert Altman on both the stage and film version of the play COME BACK TO THE FIVE AND DIME, JIMMY DEAN, JIMMY DEAN, opposite the likes of Cher and Karen Black. That eventually lead to the film that would both act as his greatest legacy and the film that would destroy his career, his first leading role, and his last: 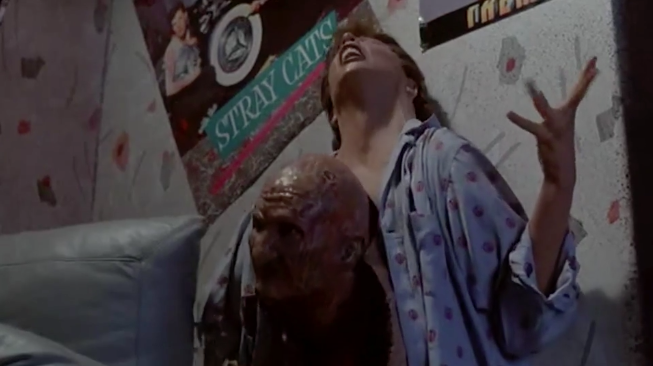 A NIGHTMARE ON ELM STREET PART 2.

In a lot of ways, NIGHTMARE 2 deviated a lot from the classic 1984 original that introduced the world to the dream-dwelling, child-killing supernatural murderer Freddy Krueger. It was the first, and only, to have a “Final Boy,” rather than the traditional Final Girl, and a film that dragged the Boogeyman of the Unconscious out of his nightmare realm and into the real world, for the film’s infamous pool party massacre climax, as well as the film’s move toward a body horror/possession hybrid, as Freddy attempts to be reborn my taking over the body of Patton’s sensitive teen lead, Jesse.

The problem? Not only did they hate all that retconning of the previously established Krueger mythology, they hated Jesse and what he represented. Because Jesse, as written, directed and perfromed, did not read as the typical ‘80s teen male hero, but as… gay. And the film languished for decades as something of a joke, the homoerotic film that, briefly, turned Freddy gay.

While Patton was living as a gay man in his private life, he was still closeted by Hollywood’s standards, and NIGHTMARE was not only his first lead role in a major franchise motion picture, but his attempt to prove that he could “play straight” ?— that is convince as a heterosexual romantic hero. His character was given a girlfriend, played by Kim Myers, and a handsome best friend character, played by Robert Rusler. But there were creative decisions, made right  at the script level, that seemed to point towards the film having a subtext about coming out and grappling with a latent homosexuality, with Freddy representing the monster within.

The problem? After the poor reception upon its initial release, screenwriter David Chaskin denied having ever put any such material into the script, claiming that any of the perceived “queer” content was the result of Patton’s performance. The young actor was left out to hang by the writer, and to a lesser extent, director Jack Sholder, and was driven to quit show business and go into hiding, even as generations of fans gleefully mocked and insulted the coded content of the maligned horror sequel.

SCREAM, QUEEN finds Patton coming out of hiding, decades later, to reclaim his legacy, rewrite his story and get himself from out of the shadows of homophobic vitriol and insult. Patton was lured out of his cozy, quiet life in Mexico by the comprehensive  2015 documentary NEVER SLEEP AGAIN, and seeing a growing queer fanbase centered around his sole leading role, he decided to take his infamy by the horns, translating it into a role as an activist for the gay community and those affected by HIV.

SCREAM, QUEEN is at once infuriating, heartbreaking, and inspirational. It’s also, at times, scattershot, as directors Roman Chimienti and Tyler Jensen struggle to find a proper entry point for their saga. There’s a lot of ground to cover: establishing the legacy of Freedy Krueger and A NIGHTMARE ON ELM STREET for the lay people in the audience, who Patton was and how it affected him, and its context placed within the history of the gay community from the 1970s on. As such, the first part of the film sometimes feels like a frantically shuffled deck of cards; there’s a lot of interesting material but Jensen and Chimienti are too quick to hop between each idea, leaving one a little breathless from the constant information overload.

Thankfully, the film gains its footing, and becomes  a more confident motion picture once it begins telling Patton’s story. Patton is s compelling figure to build a story. He’s a natural raconteur, a charismatic presence. And he builds a natural empathy towards his plight ?— of feeling screwed over by those who were meant to protect him. He was just doing what was written on the page, and his director never took him aside on some of his more questionable acting decisions (that dance!), and when the shit hit the fan, they abandoned him to the callous cruelty of the so-called fans, who pilloried him for “ruining” Freddy.

But something began to happen as the film and its star aged. It began to find fans. Fans in the queer community, who began to see themselves on screen as a hero for the first time. It may or may not have been intentional to add those layers of thematic material to a sequel to a movie about a burn-scarred dream-demon with Ginsu fingers, but there have been waves of fans, just coming into their own as they first laid eyes on Jesse, who felt a twinge of identification with the character. They saw themselves, on screen, and they saw their struggles personified in the form of a monster within. It struck a chord  and helped the film shift from black sheep of its franchise to meaningful cult classic.

And with that shifted Patton’s trajectory. The former actor had built a restful life for himself, sheltered away from the slings and arrows of trolls on the Internet, but as the conversation around his feature changed, so did his desire to bury his past ?— and so did his desire to get an admission of guilt, and an act of apology, from the cagy Chaskin, who once went from denying the gay content of NIGHTMARE 2 to embracing as said conversation shifted. That quest becomes the driving engine of SCREAM, QUEEN, the narrative thread on which Patton’s story is hung on. It makes for a far more persona journey, as we root for the actor to get what he wants and what he always deserved ?— a simple “I’m sorry.” 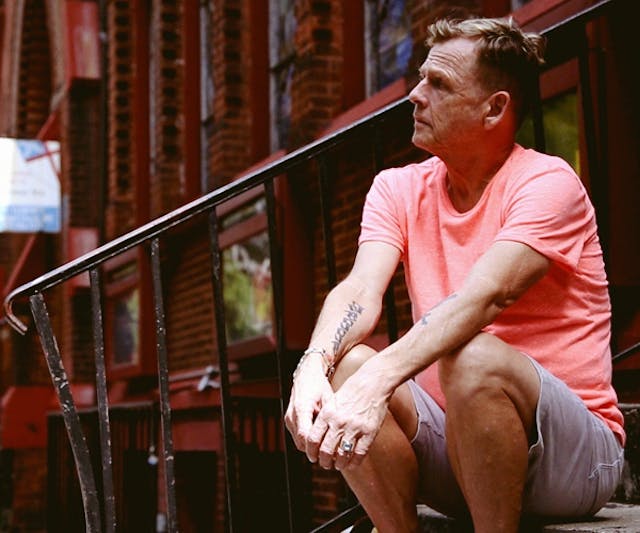 More importantly, that quest allowed Patton to make a film like this, one that looks beyond his own story to that of every queer person who wanted to see a variation of themselves on screen. It’s safe to say it left a lump in my throat while watching it; I saw a variation on my own story in the stories of Mark Patton and his friends. I know what it’s like to shrink when you hear an epithet, sharp as a whip, cracking across your ears. I know whats its like to feel ashamed of yourself, your desires, your fantasies. I know what it’s like to want to see something more accurate to yourself painted across the silver screen. I was never a huge fan of the film itself, though this documentary has given me a desire to revisit A NIGHTMARE ON ELM STREET 2. That, in and of itself, is an accomplishment. But more importantly, this wasn’t just made to help Mark Patton purge himself of decades worth of festering darkness and bad feelings. It was meant to speak to the younger generations of queer folk who may feel lost in an era of regressive Trumpian politics. SCREAM, QUEENS is a powerful, moving document of one man’s fight to simply be acknowledged. This is a necessary film. Mark Patton’s story? It’s our story as well.